Many iPhone 13 users reported it freezing randomly after iOS 16.1 update. It’s not uncommon for the iOS software to have performance issues and freeze the device randomly. We have seen similar reports from iOS device owners in the past, and we have faced software issues. Each iOS update bundles the latest security firmware, bug fixes, and patches for loopholes. We will look at the scenarios and resolve the issue by following the official solutions. 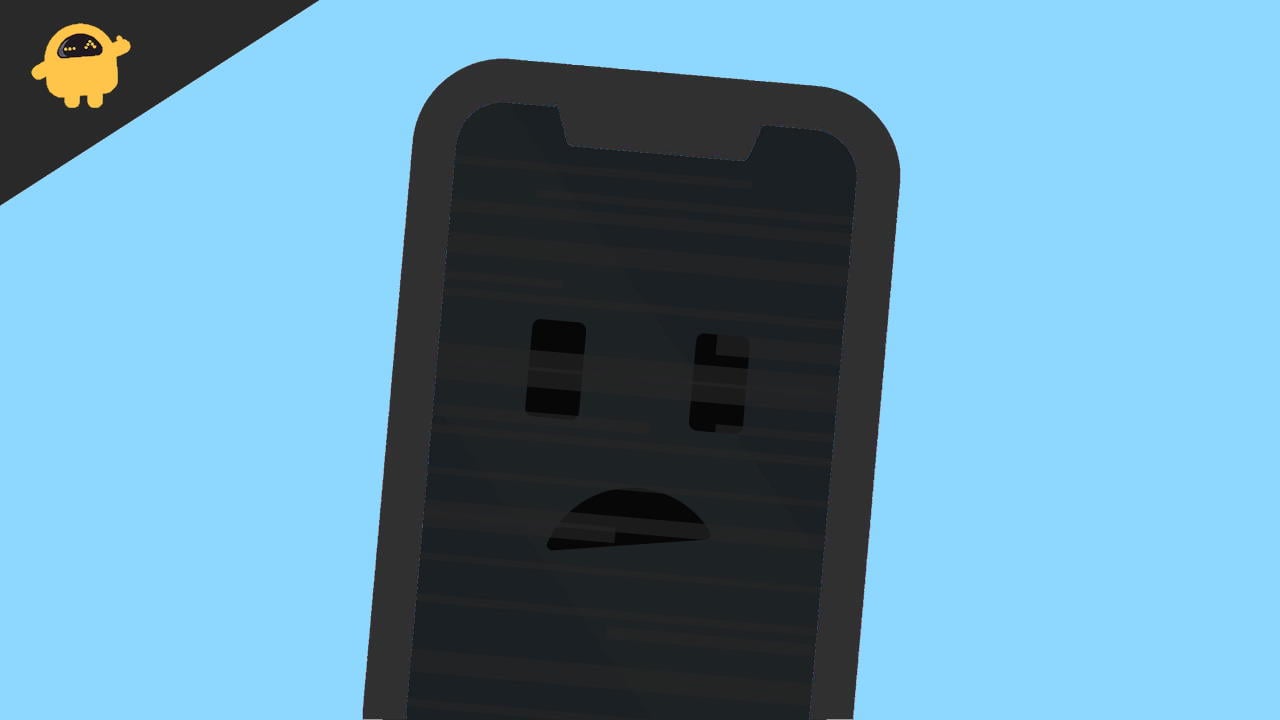 What is causing iPhone 13 to freeze randomly in the latest iOS 16 software?

iOS software is known for optimization and advanced functions, but most users have experienced the shortcomings of the latest iOS version. I started with iOS 6, which launched a decade ago in September 2012. I have witnessed software growth, and Apple developers have seen downfalls from their predecessors.

Apple developers have a time limit on the clock and are forced to release the latest iOS version each year. It’s not easy for any software company to release a new version each year with a 100% stability proposition. It takes a minimum of three months for most developers to patch new problems, and I will give you a few reasons why your iPhone 13 is freezing.

The previous iOS version had several bugs and glitches in the device. The new software update addresses known bugs and issues and invites new ones into the system. You don’t have much of a choice here, and I have shown you how to avoid automatic software updates below.

The iPhone 13 is not freezing randomly. it’s the active application that is causing the device to freeze. The third-party developers take time to release compatible patches for the iOS apps. You have to wait for the third-party app developers to acknowledge the issue and work on the patch. I recommend the users report it to the official app developers by dropping an email or filling up the feedback form, so they can take notice of it.

You can modify the settings in the iPhone 13 the way you want, even though the iOS software is limited in terms of customization. One incorrect setting can cause performance issues, and identifying the settings is very important. It’s hard to pinpoint the incorrect setting in the software, and I have shown you how to remove it in iOS 16.1 or later.

iOS environment is relatively secure from threats but iPhones are targeted by privacy invaders. There is a potential your iPhone or iPad is infected with malware or virus. Unfortunately, Apple doesn’t inform the users about the recent breaches, and they release a security patch instead. You should never avoid the security patch updates in any iPhone because they address the issue and fill up the loophole.

Almost every software in the world is prone to corruption, and iOS is no exception. The iOS system files may have corrupted files in them and it is causing the operating system to freeze. Apple didn’t provide any tools to identify the issue, and they provided one solution only. However, I’m not against it because it indeed addresses multiple issues.

I won’t use any third-party tools in the process, and I recommend you avoid using so-called iPhone tools. They are developed by random Chinese software companies and there is a potential for a security breach. We are going to apply official solutions, and I have solved most of the iOS-related issues by applying the mentioned solutions.

I have disabled automatic iOS updates in my iPhone, and you should do the same. You should avoid specific versions that may cause the device to function incorrectly, and it takes a few hours/days for the developers to release a patch. Stop the iPhone 13 from updating the software automatically.

3. Tap the “Software Update” option below the About section. 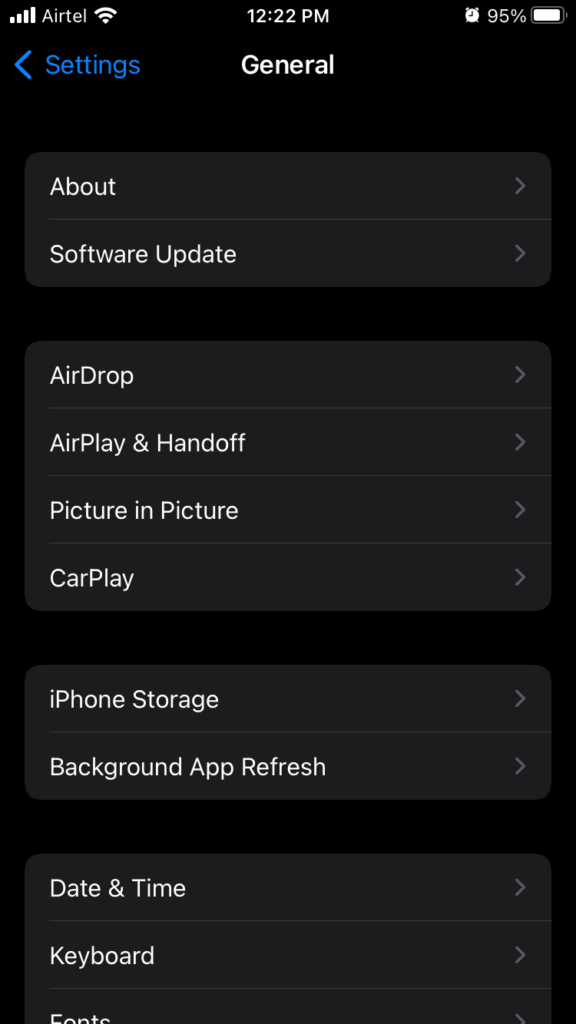 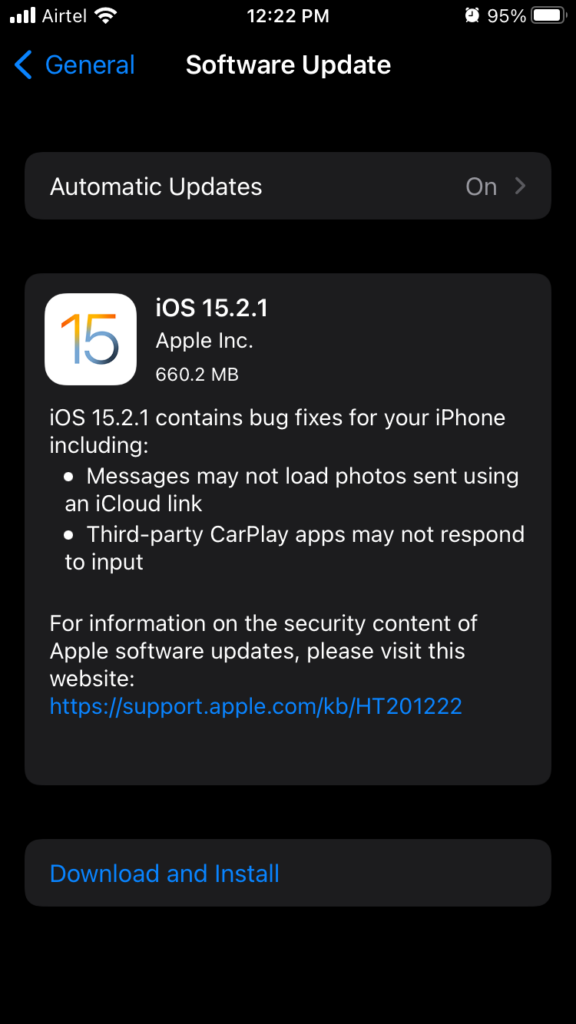 5. Tap to disable both options. 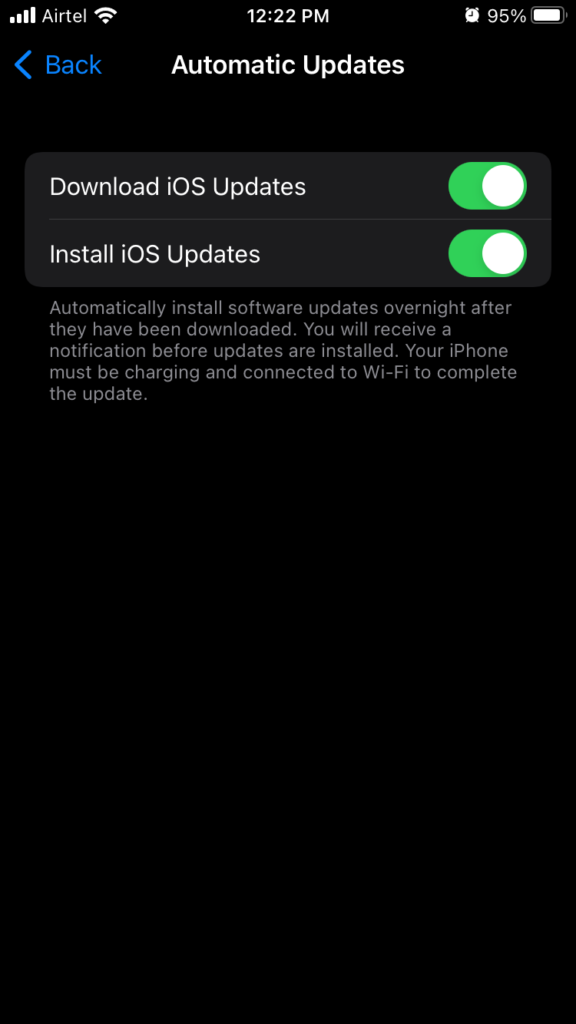 Disable both options and go back.

Now, you don’t have to worry about the iPhone 13 updating the software automatically. You won’t lose any important information or miss out on new features, and you can always update the iOS version manually.

iPhone 13 users should reboot the device from time to time, and it’s an important sequence for the iOS software. A quick restart will prevent the iPhone 13 from freezing randomly after iOS 16.1 update. The device loads the drivers, boot files, system files, and services in the next restart.

You can follow the tutorial if the Side button or Sleep/Wake button is not working on the iPhone. You don’t have to worry about waking up the device, and I have shown you an automated solution.

3. Tap the “Shut Down” option located at the bottom of the screen. 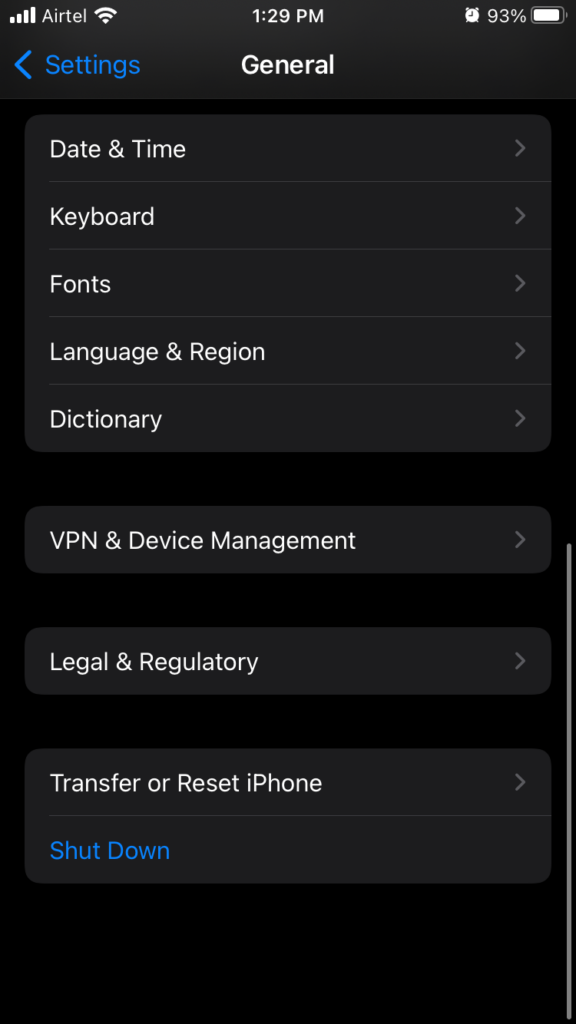 4. Slide the button to turn off the iPhone. 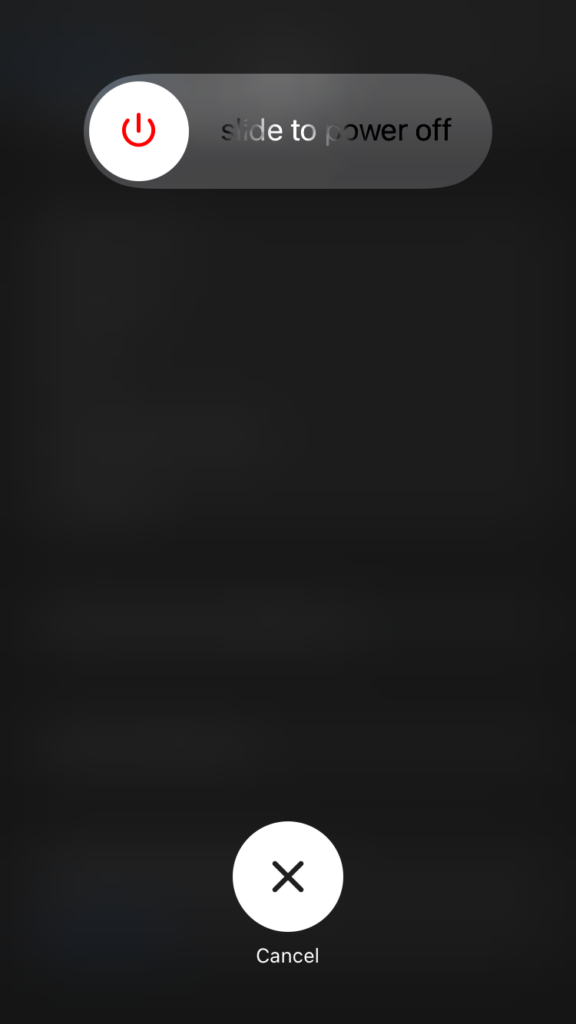 6. Plug the charger in the iPhone and place the power brick in the socket.

Your iPhone wakes up automatically and greets you at the Lock Screen. Go through the Face ID unlock system and use the iPhone, and it won’t freeze anymore. The iPhone runs plenty of services with the assistance of the drivers. A quick restart loads the drivers and services again.

You can offload the apps in the iPhone 13 and reinstall them without manual work. I have spoken about the incompatible apps in the upper section, and it’s time to address them. Close all apps running in the background and then start the process.

Connect the iPhone to the Wi-Fi network, and it should be unmetered. Make sure the targeted app should be listed in the App Store, or else, it won’t reinstall again. 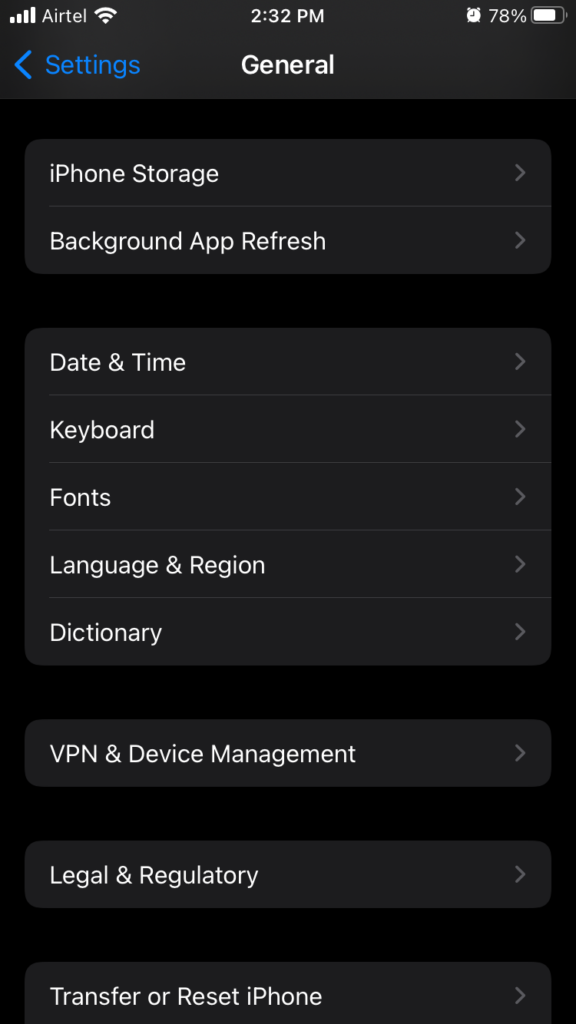 4. Tap the app you want to offload from the iPhone and reinstall. 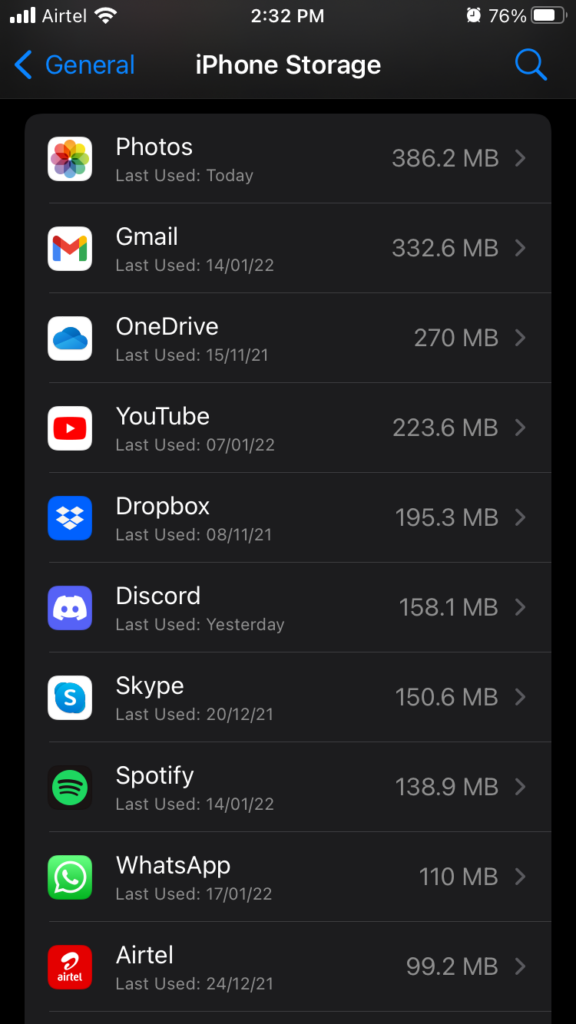 5. I selected Skype for demonstration and select “Offload App” to continue. 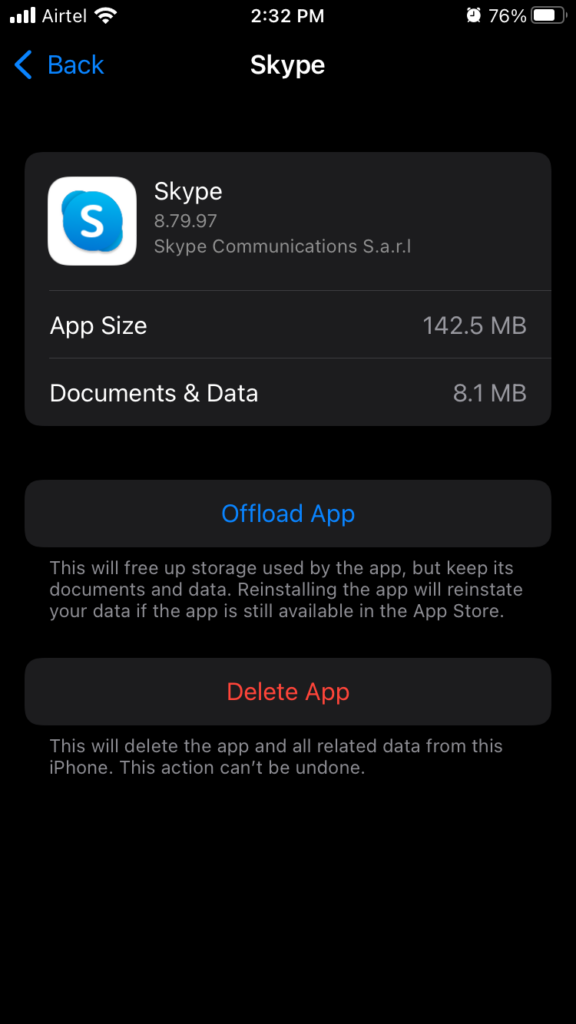 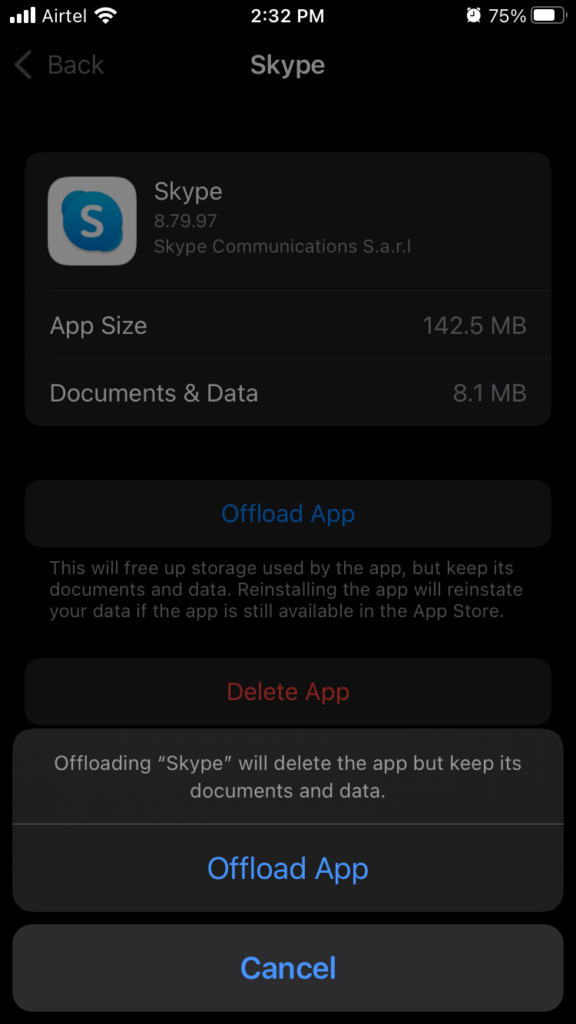 7. Give the iPhone a few seconds to remove all files from the internal storage. 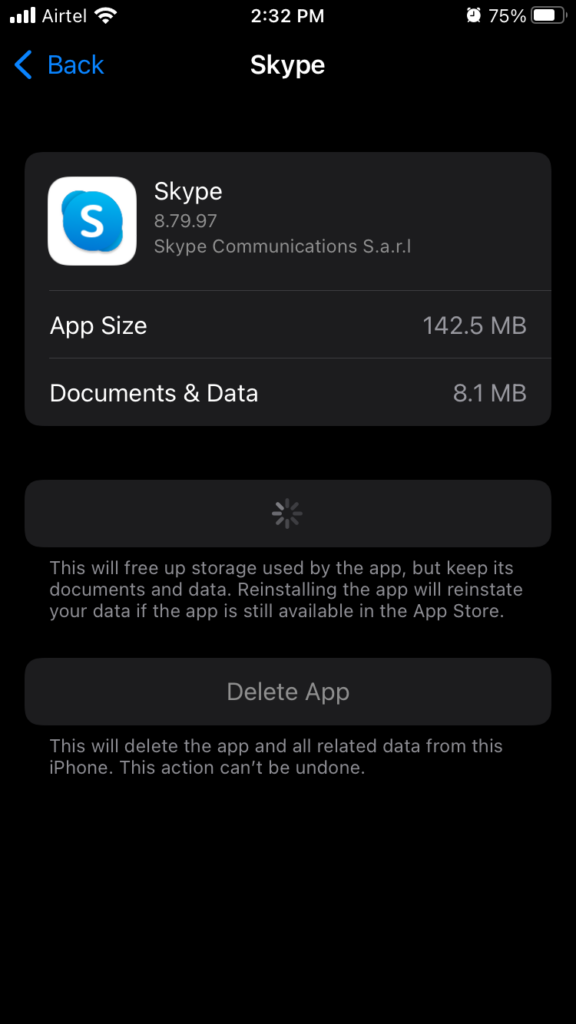 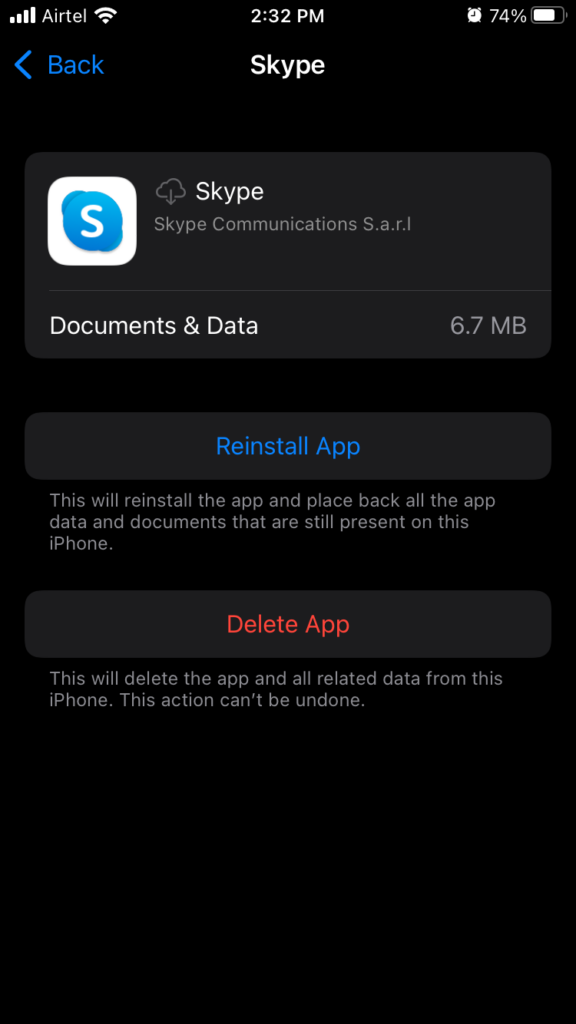 It may sound outdated but iPhone needs free space in the internal storage to run the iOS system smoothly. All operating system utilizes RAM/memory and storage drive to load system files, apps, and services. Many users are running out of storage, even though iPhone 13 ships with a 128GB storage option in the base variant.

You can take the Windows page filing feature for instance, and it utilizes an internal storage drive to store the program’s data. The iOS software stores the temporary app data in the internal storage, so it can free RAM.

4. Tap the app you want to uninstall from the iPhone 13. 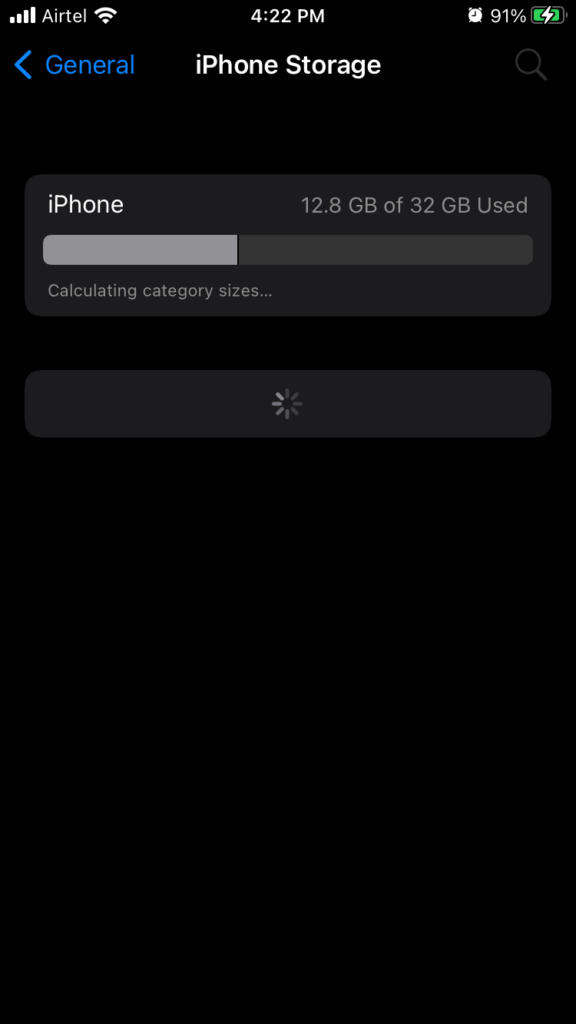 5. You should have a minimum of 10GB free in the internal storage. 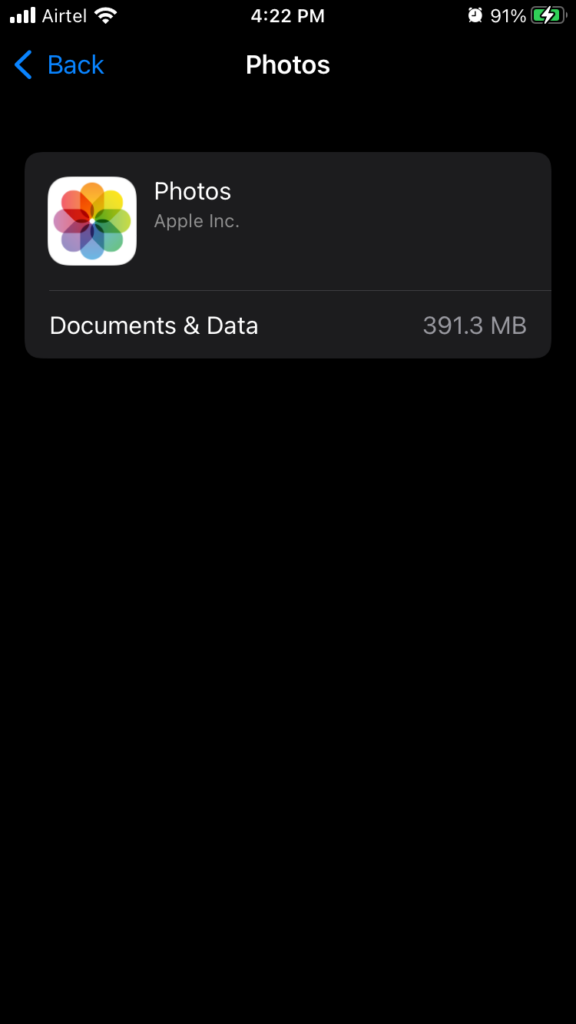 You might have videos, photos, apps, and other media content that take lots of space. Delete unnecessary videos and photos from the device and maintain a minimum of 10GB of free internal storage.

The iPhone battery is more than just a battery, it is responsible for supplying demanded power to the components. A defective battery faces a hard time supplying the asked voltage, and the processor or other components won’t function at maximum capacity. 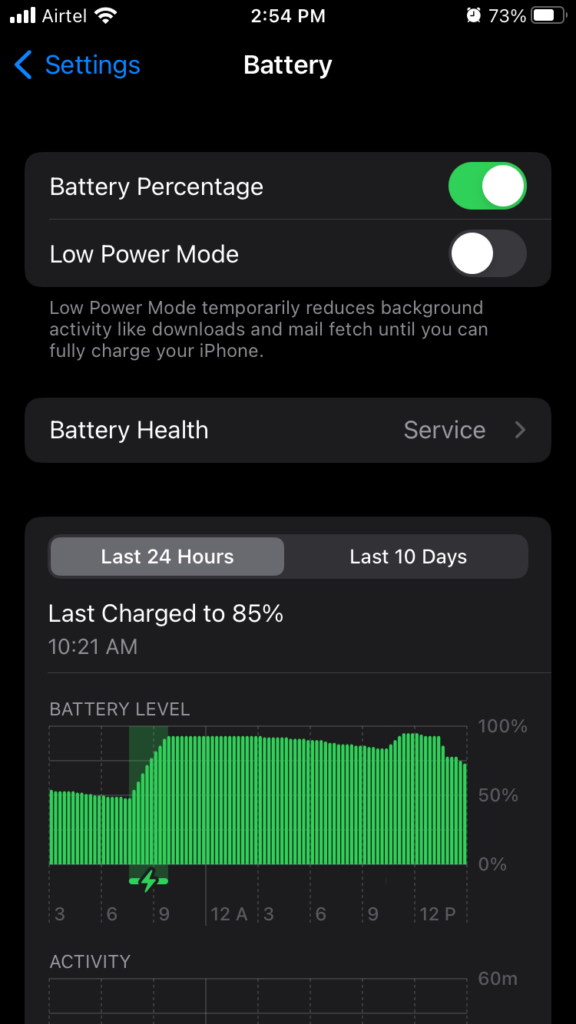 5. Note down the “Maximum Capacity” reading. 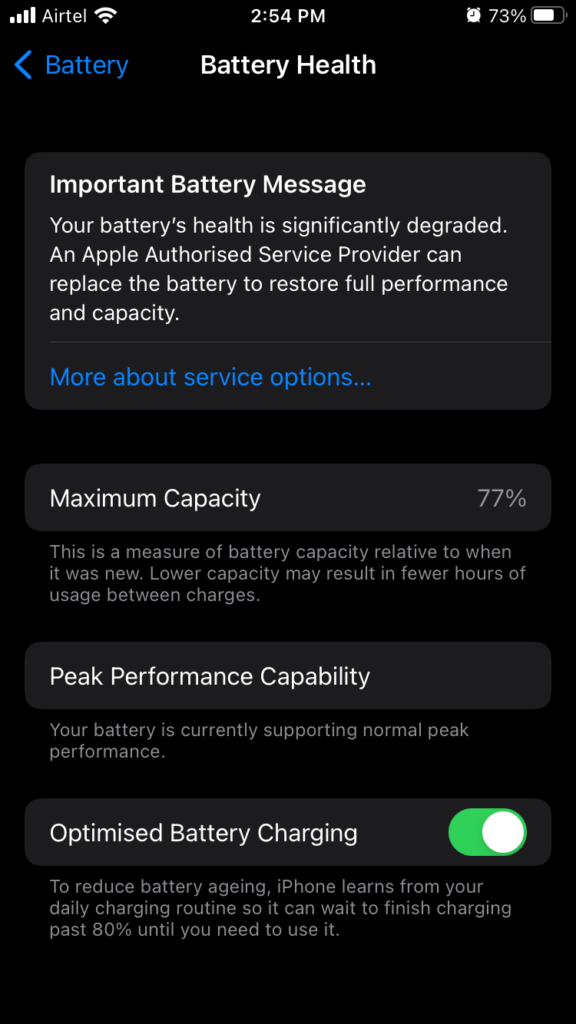 Restart your iPhone and go back to the setting to find the new reading. The iPhone battery is good if the reading is 90% or above. My iPhone battery capacity is 77% and requires a replacement.

All hardware components’ performance decreases when the temperature rises inside the housing or outside the housing. You should reach out to Apple for further investigation because I don’t think you should take the device apart to learn more about it.

Apple programmed the physical buttons to defy the software and perform force restart. The device will restart, and It doesn’t matter if your iPhone 13 is frozen or stuck on Home Screen. There is no harm in force restarting the iOS device, so take time to act.

iPhone 13 or iPhone with Face ID:

Apple ditched the Home button in the iPhone X and later devices, so the instructions are similar to the iPhone 8 series.

a. First, press and release the Volume Up button.

b. Secondly, press and release the Volume Down button.

c. Lastly, press and hold the Side button.

Do not release the Side button until the Apple logo appears on the screen.

iPhone X and later devices have Face ID as the security unlock feature, which applies to the latest iPhone 13 series.

Users can restore the iOS software without voiding the warranty and messing up the iPhone. You can remove viruses, corrupted files, incorrect settings, and other problems by reinstalling the iOS version. ITunes removes the software from the device and installs a fresh version from the servers.
It’s a hectic process, but I will show you how to do it in a few minutes.

You are going to wipe the internal storage, and it formats the storage drive, and back up the stored data in the Windows PC or other machine. You can upload the backup in the iCloud storage, but I recommend you to do it along with a full backup in the local storage.

You have to remove Find My services because it prevents the iPhone 13 from restoring the iOS software. Of course, Apple did it to prevent thieves from re-purposing the iPhone after they stole it.

A genuine lighting cable is required to connect the iOS device to Mac or Windows PC.
Make sure to install the latest version of iTunes in Windows and Mac. The macOS Catalina latest version or later has iTunes in Finder app by default.

Your internet connectivity solution shouldn’t have any limitations and

Restoring the iPhone software is an exhausting process for the hardware and consumes lots of power. The Recovery Mode puts the iPhone in sleep mode and creates a soothing environment for it.

iPhone 13 doesn’t have a Home button, so make sure to read the tutorial twice, then perform the instructions.

a. First, press and release the Volume Up button.

b. Second, press and release the Volume Down button.

c. Lastly, press and hold the Side button until the Recovery Mode logo appears on the screen.

You can get out of the Recovery mode by pressing the Side button for ten seconds. The RM doesn’t damage the software or hardware, so there is no harm in putting the device in the Recovery Mode.

a. Connect the iPhone to PC.

b. Launch iTunes and detect the iPhone in Recovery Mode. 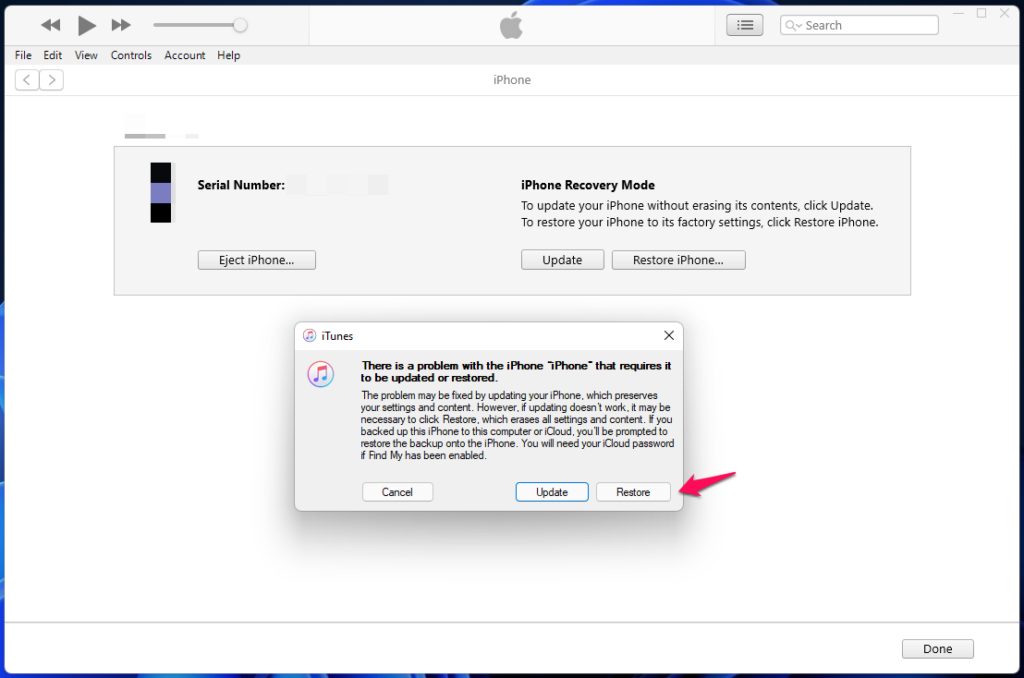 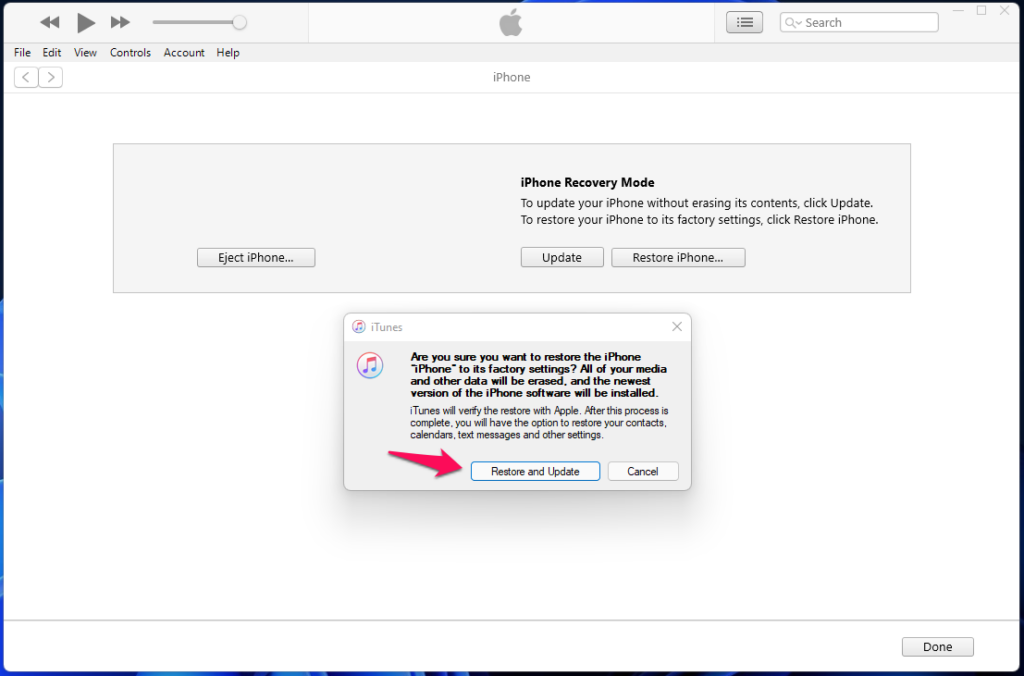 Let iTunes automate the process from now on, and you should leave the machine alone. The PC Suite downloads Apple signed iOS firmware from the server and installs it on the device. You will be greeted at the “Hello” screen, and it takes a minimum of thirty minutes to finish the process.

Wait for the next iOS update 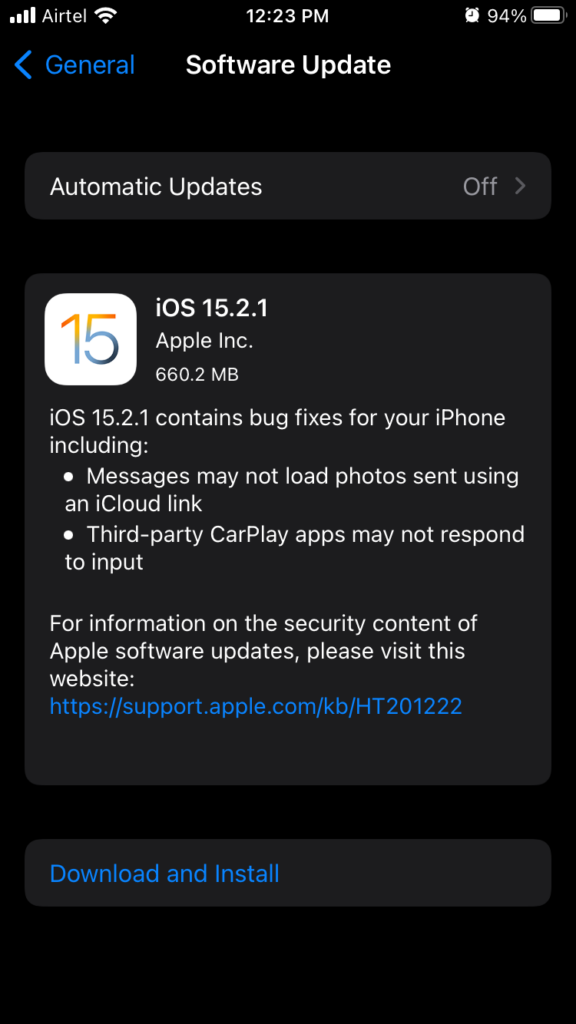 Many iPhone users don’t have the time to perform the software restoration and you can wait for the Apple to release next update. However, you should only update the iOS version, if it addresses the issue. You can read about it in the patch notes and quick peek notes. Make sure to watch a video on YouTube about the latest iOS version and it should be specific to iPhone 13.

You should book an appointment with Apple to check the iPhone 13 that keeps freezing randomly after iOS 16.1 update. The iPhone 13 must be having a problem with hardware, and it could be the primary reason for the performance issue. Apple will replace the iPhone, if it is having performance issues, and it is covered under the warranty. Let us know how you solved the freezing issue in the iPhone 13.