Samsung had earned quite a great success with both its flagship as well as budget phones. After Samsung introduced the Galaxy A-series and M-series smartphones in the market, it has given a good competition to other phone companies such as Xiaomi. And now the well known South Korean smartphone company has managed to add another budget smartphone The Samsung Galaxy A01, which is a complete value for money. Since its a budget device, it might not come with an officially waterproof design. However, there are other competitors in the same price bracket which comes with a splashproof and water-resistant design. So it would be interesting to know if the new Samsung Galaxy A01 with waterproof specifications.

Samsung has introduced this device under the sub 10k market, which is great news for all Samsung phone lovers. The device contains all the required features possible at this range. Plus, users can experience a bezel-less display along with a waterdrop notch design and great camera quality. And since Samsung is known for customers satisfaction, many users do suspect that the new Samsung Galaxy A01 will come with waterproof specs. Well, today we will find just that in our Samsung Galaxy A01 waterproof test. 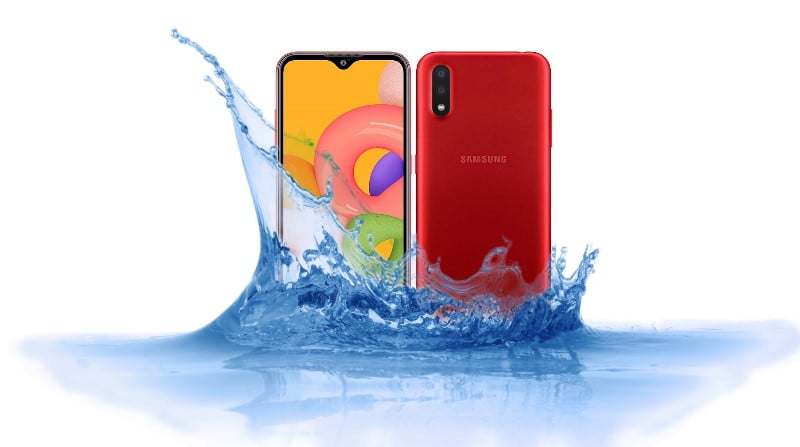 Is Samsung Galaxy A01 Waterproof device?

For any smartphone to be waterproof, it must possess a special IP waterproof rating. An IP rating is an international standard that is used to define levels of sealing effectiveness of modern smartphones. These IP ratings are presented in the form of IP, followed by two numbers.

Samsung has launched another excellent device, the Samsung Galaxy A01 within a reasonable price. It has a 5.7 inches PLS TFT LCD display. The device runs on the Qualcomm Snapdragon 439 Chipset and an Adreno 505 GUI. It is powered by the Octa-core (4×1.95 GHz Cortex-A53 & 4×1.45 GHz Cortex A53). It comes with 2GB RAM and a 16GB of internal. However, it also provides a dedicated slot for microSDXC. This model is available in three different colour variants Red, Blue, and Black. Coming to its camera section, the Galaxy A01 comes with a dual rear camera setup of 13 mp main camera along with 2.2 aperture, 28mm wide-angle lens, and a 2MP depth sensor camera. It also has a 5MP front camera with 2.2 aperture which lets you take normal selfies.

Moreover, you also get a non-removable Li-Ion 3000 mAh battery. In addition, it also gives a 5Volt, 1Amp USB power adaptor and a 3.5mm audio jack hand free. Other features include accelerometer and proximity sensor. The device weighs around 145g and comes with a plastic back with a matte finish. However, there are no official waterproof ratings for the device.

Since the new Samsung Galaxy A01 doesn’t have any official IP68 waterproof rating, it cannot consider as a waterproof device. However, it might be waterproof and splashproof as well. So in our test, we will test whether the device can hold itself under a splashproof and waterproof test.

After conducting the waterproof and splashproof test on the latest Samsung Galaxy A01, we conclude that this device is not waterproof. It got instant display damage, which is not a sign of a waterproof smartphone. However, the device is splashproof to some extent and can manage any accidental water or juice spills. And since the device doesn’t have any moving parts or components, it is dustproof as well.

How To Care For Samsung Galaxy A01 Smartphone

Since Samsung Galaxy A01 waterproof device, we advise you to take proper care of your device. You can follow these steps to do so:

In case your device gets water damage, keep the device in a box full of rice for 1 hour and check with the nearest service centre.

As you can see from the above result that the device doesn’t perform so good when immersed in water. This is a clear indication of not being waterproof. If the device were waterproof, it would pass our Samsung Galaxy A01 waterproof and dustproof test.