A few days ago, in a surprise move, Nokia enabled unlocking bootloader on its device Nokia 8. For a long time, we keep seen Nokia making the kernel source code of their various devices public.  However, as there was no means to unlock the bootloader, the source code was not used to the developers. Currently, it is just the Nokia 8, whose bootloader got unlocked. HMD Global also hints other devices will soon have their bootloader unlocked. In this post, we will guide you to unlock the bootloader on any Nokia smartphone. With the unlocked bootloader, developers can now root, and develop custom ROMs and recoveries.

Basically, the bootloader unlocking procedure will be similar for all the Nokia devices. It includes the validation of your device. The validation will be done by an App that will be sent to you after you sign in with Nokia servers. After that, using an unlock key and a few other steps, you will be able to unlock the bootloader of any Nokia device. Below you can find all the steps in a detailed manner. 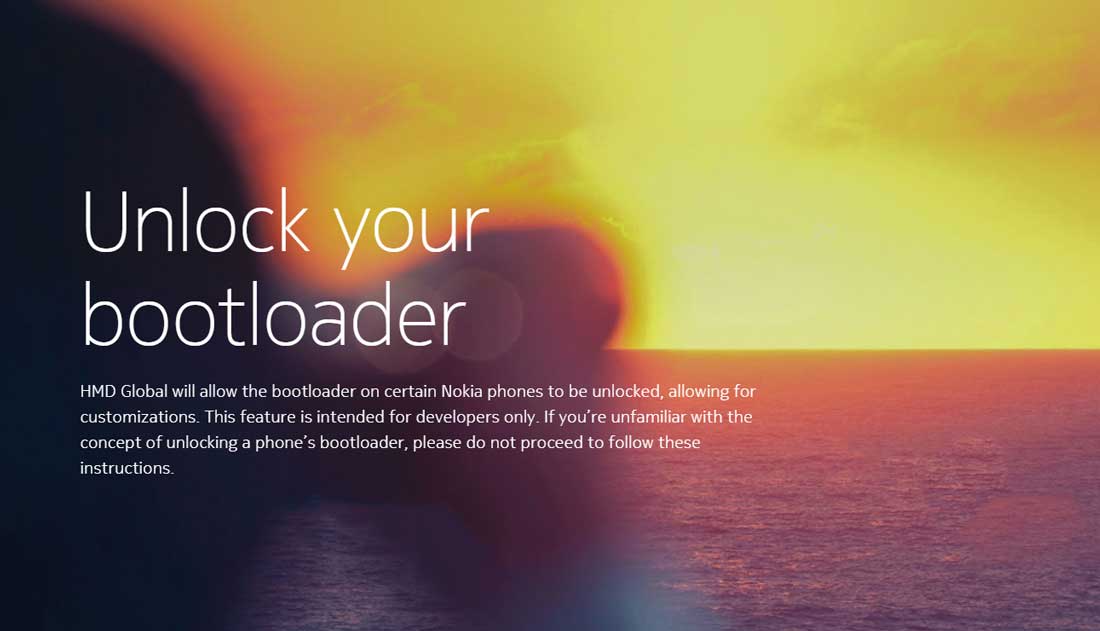 Steps to Unlock Bootloader on Any Nokia Smartphone

Before we jump into the unlocking process, there are a few guidelines you must be aware of. We have mentioned them below.

How To Request for Bootloader Unlock on Any Nokia Smartphone

Steps to Unlock the Bootloader

Now we will see how to unlock the bootloader step-by-step.

Step-1 Install ADB and Fastboot on your PC and enable the USB debugging on the Android phone.

Step 2 Now, head over to the folder where you have installed Fastboot and ADB.

Step 3 Go to start > click the address bar > type cmd and press Enter. It will launch the command prompt.

Step 5 Now, go to the folder location where you have placed the unlock.key and

Step-6 Enter the following command to unlock the bootloader.

So, that’s it. Now your Nokia device bootloader is unlocked. You can flash the custom ROM of your choice. You can flash recoveries. If you have any queries regarding the process, do let us know. We hope this guide helped you.

Before moving on to the bootloader unlocking process, you need to follow the guideline we have put up below and get some tools with you.

Unlocking bootloader may void the warranty of your device. Perform any kind of modification on your smartphone at your own risk. GetDroidTips will not be responsible for any hardware or software issues on your device.

Steps to unlock the bootloader

Step-1 Get the Bootloader Unlock Key for $5. For this, you have to provide information such as the IMEI number for SIM 1 and the device Serial number. If you don’t know the serial number go to Settings > About Phone > Status.

Step-2 Go to phone Settings > System> Developer options. In there, scroll down to OEM unlock and tap to enable it.

Step-3 Switch off the device. Then connect to the PC via USB cable > Press Vol Down + Power key till you reach the Download Mode screen.

Step-4 Go to the folder where ADB is installed. In the folder right-click + Shift > Open PowerShell Window.

Step-5  To detect that your Nokia device is properly connected with the PC, give the following command.

Step-6 If the device detected successfully, now give the following command

Note: You have to replace UnlockFile.bin with the name of your bootloader unlock file you have downloaded. You can give the full path as well.

Step-7 It’s time to unlock the bootloader. Give this command.

Step-8 If you happen to see a prompt on your screen that wants you to confirm the bootloader unlocking process, then use Volume keys to select Unlock bootloader.

Step-9 This step is important as your bootloader will be reflashed. This means your device will be wiped out clean. Give this command.

Step-10 You have to wait for some time for this process to finish.

That’s it, guys. You have successfully unlocked the bootloader of your Nokia device. It is the unofficial bootloader unlock method for Nokia smartphones. You even have the official method. So, it depends upon you what you want to follow. Unlock the bootloader and enjoy customizing your device.