This page is being continuously updated…

Update as of December 6: A new list of devices in the various stages of Android 12 update has arrived according to which, nothing much has changed except Xiaomi CIVI is now working on Android 12 closed beta update. Here’s the list to go through. 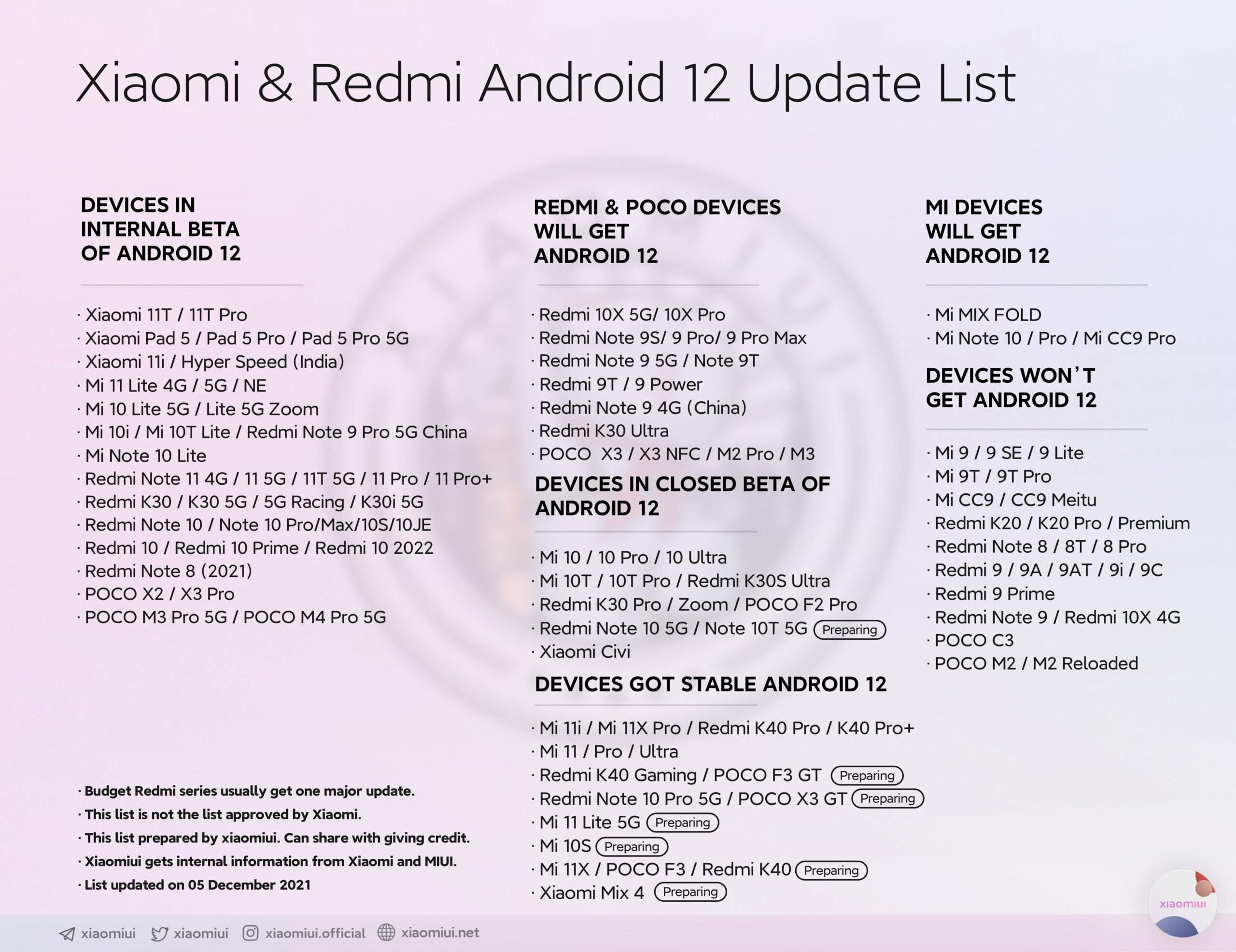 Update as of November 4: A Telegram group that details Xiaomi devices getting Android 12 (and other) updates has posted a new list of devices in various phases of Android 12 development. You can check out the list here.

Update as of October 5: The Android 12 AOSP finally went live. What this means for Xiaomi users is that their OEM can finally tweak it and release a stable Android 12-powered MIUI version sometime later this year. The dates aren’t available at least for now. [Source]

Update as of October 2: As per latest development, Xiaomi has begin testing out Android 12 internally on some of the smartphones listed below.

Update as of September 27: A popular and reputable but unofficial Telegram channel that goes by the moniker Xiaomiui has posted a photo showing the status of Android 12 development on Xiaomi devices which counts devices that are in internal testing phase, devices that have participated in Android 12 beta program as well as devices that will and will not get Android 12. You can check out the list here. 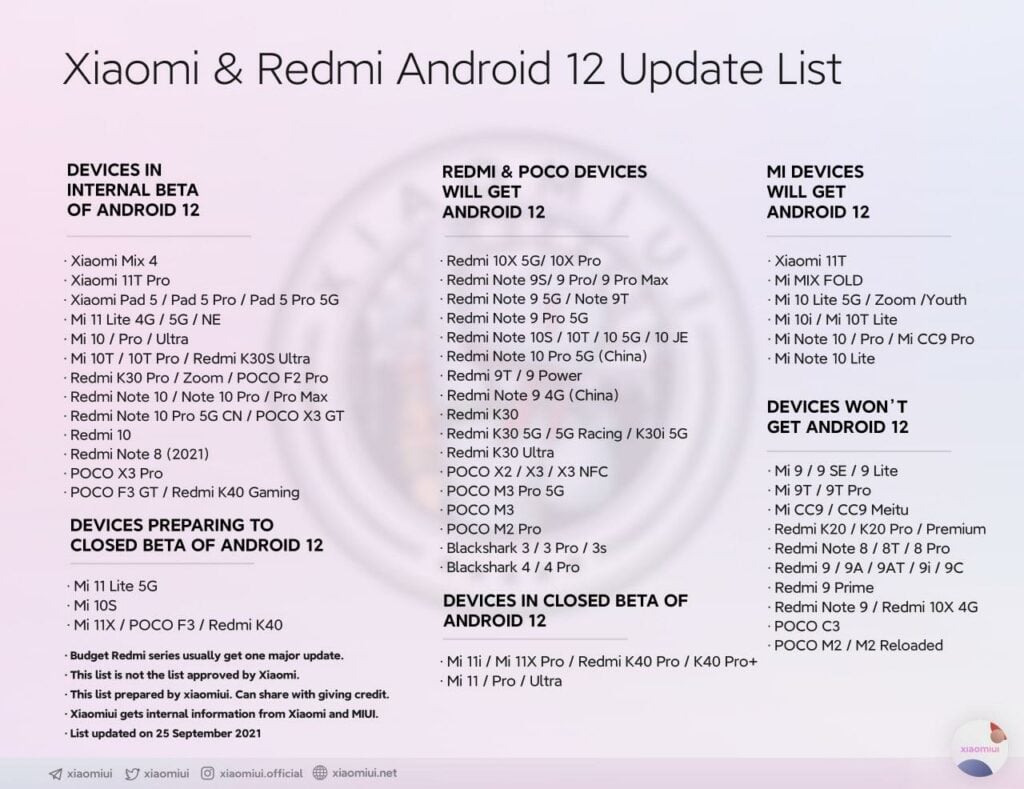 Google released the developer preview build of Android in February, intending to give developers enough time to update their application according to the new Android OS version coming out this year. The developer build on Android 12 will be exclusive to the Pixel lineup under Google, and it will continue till May. By the end of May, we can expect Google to roll out the beta version of the Android 12 update. This is how they have gone about it in the past, and we can expect the same this time around.

Last year, besides Pixel devices, Android smartphones from other OEMs also became part of the Android beta program. Manufacturers like Oneplus, Xiaomi, Oppo, and a few more were quick to provide beta updates of the upcoming Android version for their premium smartphones. This time around, we can expect something similar too. Samsung did not get in on this program last year, and even this year, it seems like they are staying out of it. But Xiaomi is expected to continue on the tradition from last year and provide beta build updates to their smartphones.

The company launches several smartphones in a year in different price segments. This works in their favor to bring in huge amounts of cash as their smartphones cater to every price category. No matter what the budget is, there is a Xiaomi smartphone for it. This can work against a company, too, as many devices mean that there needs to a high number of update releases to these smartphones. But Xiaomi is not a slacker in this aspect at all. They are known as the company that provides weekly updates to their smartphone users, and they do it for all their eligible smartphones.

The updates come as bug fixes, new feature additions, security patch updates, and OS updates (once a year). So based on the pattern that Xiaomi follows for its different series of smartphones, we have compiled a list for all the Android 12 eligible Xiaomi smartphones launched so far.

Update as of October 29: According to the information available, Xiaomi has kickstarted Android 12 recruitment for beta testers in Vietnam, Malaysia, and Thailand for Mi 11 Ultra users.

Update as of September 30: The Xiaomi Mi 11 Lite global version is now being roped for the stable Android 12 as the OEM has announced recruitment for stable testers on the global variant. You can fill this form here and read the announcement here. Only 200 slots are available for the Mi 11 Ultra global Android 12 stable update program.

Update as of September 30: Looks like Xiaomi is now recruiting stable testers for Xiaomi Mi 11 on its global ROM. The recruitment is for stable Android 12 and only 200 slots are available on a FCFS basis. You can fill this form here and read the announcement here.

Update as of October 29: Based on the latest info, the Xiaomi Mi 11 is now a part of beta testers recruitment for Android 12 in Malaysia, Thailand, and Vietnam at the time of writing this.

Update as of September 30: Good news for Mi 11i global variant users as Xiaomi is recruiting stable testers for Android 12 on Mi 11i. Fill up this form after reading the announcement to get your hands on the Xiaomi Android 12 stable update way before any other smartphone gets it. Note that only 200 slots are available for Mi 11i. [Read official announcement here]

Update as of October 29: The Mi 11i in Vietnam, Malaysia, and Thailand is now picking up beta testers as the recruitment for Android 12 has started for users.

Update as of October 14: Good news for Mi 10S users in China as the device is now getting its hands on the Android 12 based Closed Beta program in the home country. The update is so far limited to a handful of models in China only which now includes Mi 10S.

Update as of October 14: Apart from Mi 11 Lite 5G, Redmi K40 is picking up the Android 12 Closed Beta program in the home country. The update is limited to Redmi K40 users in China only.

Update as of January 14: Xiaomi REdmi K40 in China is reportedly testing out Android 12-based MIUI 13 internally in its home country with version number V13.0.0.1.SKHMIXM. Note that this update is not available for masses but being internally tested.

Update as of November 10: Turns out Redmi K40 Gaming is picking up Android 12 via MIUI Close Beta build v21.11.8 in the home country as per the reports. The update is releasing slowly and steadily so even if you have a K40 Gaming smartphone, you will have to wait some time  to catch the update.

Update as of January 14: Xiaomi Mi Mix Fold in China is testing out Android 12-powered MIUI 13 internally. It is yet to reach beta stage for public rollout just for your information.

Update as of February 9: Good news for Poco F3 GT users in India as the device is now intercepting Android 12-based MIUI 13 bearing version number 13.0.0.10.SKJINXM which is a stable update.

If Xiaomi launches any new smartphone with Android 11 now, then you can add that smartphone to the list of eligible smartphones too. For now, though, these are all the Xiaomi devices that we can expect to receive the Android 12 update.

So this is all about the Android 12 update for Xiaomi devices. If you have any questions or queries about this article, then comment below, and we will get back to you. Also, be sure to check out our other articles on iPhone tips and tricks, Android tips and tricks, PC tips and tricks, and much more for more useful information.