Home » Games » Fix Valorant System Error: A critical error has occurred and the process must be terminated

Talking about Valorant gameplay, you need to log in to Riot Servers before playing. Hopefully, that is automatically done by the gaming client whenever you double click on the title. The users are facing an uncommon issue in which they are being told that the process has to be terminated. And the game is getting closed itself. Now, this error looks like a glitch, and we had to fix it. Today, our guide will deal with System Error in Valorant So if you are one of those users who is facing this issue in the closed beta of Valorant, then you are in the right place. So let’s get started.

Valorant is a tactical shooter and first-person video game that is developed by Riot games. If you have played League of Legends, then you should know the developer for making awesome games. However, the game is suffering from a few glitches and errors that are making it troublesome.  The game was planed to be released during the middle of summer, but still, any official announcement has not come forward in regard to this. 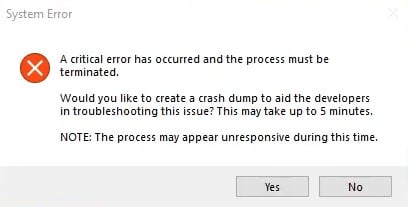 The issue here seems like a glitch rather than a bug that prevents the users from entering the game. Moreover, the error tells the users to create a crash dump that can help the developers to improve the game. Now, this looks like a resource error to us. That means the system is unable to create a system crash dump or a dump file where the game can generate or store the unwanted cache. So we started to think about it and finally concluded how the users could fix it. Well, that is what we have put in the next sections.

How to Fix a Critical Error has Occurred: Valorant System Error

Now we will discuss the best and the easiest fix that will help you solve this error. As this is a tried and tested one, we recommend not to do anything extra than what we say here. Follow the steps below to fix the error. 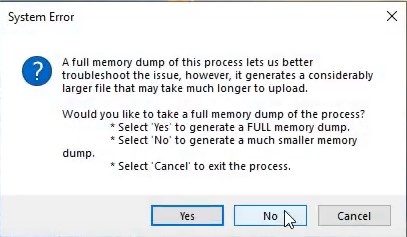 Now you can start your game and won’t face any errors. The reason behind such error is, as the game is in its beta form, it does not have the in-game modules that can let it access the inner files. So allowing the game administrator privileges, let’s the game do so.

This guide was to help the players of Valorant, who were continuously experiencing the critical error of termination or the Valorant system error. After following our guide, their error must be solved. We hope our guide helped you.  If you have any queries or feedback, feel free to comment down below with your Name and E-mail ID. Likewise, check out our iPhone Tips and Tricks, PC tips and tricks, and Android Tips and Tricks for more such tips and tricks. We urge you to participate in the $100 giveaway by subscribing to our YouTube Channel. Thank You.