Huawei P30 Lite is a mid-range smartphone by Huawei launched after the success of the original P30 Pro. The new Huawei P30 Lite doesn’t have the periscope camera feature, which was the main highlight of the device. However, there are many device changes which we can see in the new P30 Lite smartphone. One of them is the splashproof and waterproof resistance of the smartphone. Today we are conducting Huawei P30 Lite waterproof test to see if it is waterproof or not. 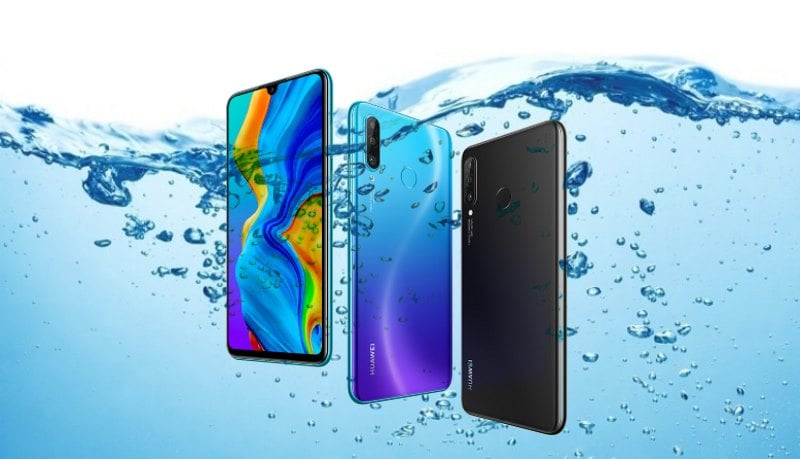 The demands of modern customers are increasing day by day. Taking care of that, many Chinese smartphone companies are including splashproof and waterproof capabilities n their latest smartphones. A waterproof smartphone can be convenient when you need to use your device in rainy weather, to talk, or to play games while in shower. You can also enjoy underwater photography or videography etc. Or if you’re crazy enough, you can video call your friends while going for scuba diving. The possibilities are endless, but only if the new Huawei P30 Lite is properly waterproof and IP68 certified.

Huawei P30 Lite runs on Android 9.0 Pie with EMUI 9.1 and backed by a non-removable Li-Po 3340 mAh battery. It also has a fingerprint sensor on the back. The handset supports Hybrid Dual SIM with 4G. It comes with connectivity options such as Bluetooth, Wifi, USB OTG, FM, 3G, and 4G.

Since the new Huawei P30 Lite doesn’t have any official IP68 waterproof rating, it cannot consider as a waterproof device. However, it might be waterproof and splashproof as well. So in our test, we will test whether the device can hold itself under a splashproof and waterproof test.

The above waterproof test’s results is purely based on individual/team observation. These tests will only give an idea of whether a device is waterproof or not. We recommend users not to try this test at home, as it might damage your device.

After conducting the waterproof and splashproof test on the latest Huawei P30 Lite, we conclude that this device is not waterproof. It got instant display damage, which is not a sign of a waterproof smartphone. However, the device is splashproof to some extent and can manage any accidental water or juice spills.

After conducting the waterproof test on the latest Huawei P30 Lite, we can say that the device is not waterproof at all. Immediate water submersion causes the device screen to fail and blackout. However, it can sustain a few accidental waters or juice spills. We would not recommend users to take this device while water sports or activities like swimming, diving, river rafting, etc. Any long exposure in any kind of liquid can damage the device.