Updated on Aug 21, 2020: Currently, the Verizon Moto G7 Power has started receiving the stable Android 10 update via OTA that comes with a software version QCO30.85-18. The update notification screenshot has been shared by a user on Reddit which indicates that it brings the system-wide dark theme, gestures navigation, volume controls, etc along with plenty of other Android 10 goodies and system improvements.

We will also include one important thing is that Moto G7 Power is on its last major Android OS update and it won’t gonna receive the Android 11 stable official update anymore. However, thanks to the Project Treble support, all the interested users can manually flash the Android 11 GSI or any other third-party firmware on their Moto G7 Power with ease.

Updated on Aug 7, 2020: As we all know that Motorola has officially started pushing the latest Android 10 stable update for its Moto G7 Power devices. However, not all variant users are lucky enough to receive the same. Recently, Motorola US has mentioned that it may take some time for the Verizon Moto G7 Power users to receive the Android 10 update.

So, there is no expected ETA mentioned by the company yet because the update approval is pending for the partners. That’s why Verizon Moto G7 Power users have to wait further.

Updated on July 07, 2020: Finally, the Indian variant of Moto G7 Power users are getting the official Android 10 update via OTA in a phased manner. Though the handset has started receiving the same almost two months ago, it takes much time to arrive in India. The software version is the same for all regions. The OTA update includes the changelog details that we’ve provided below.

Android 10: Android is more secure and easier to use than ever. Check out the new gesture navigation, system-wide dark theme, and better notification control with suggested actions and silent groups. You also have more control over privacy and security to ensure that your data is always protected.

Updated on June 30, 2020: As we’ve already mentioned before that Motorola is rolling out the firmware OTA update in a phased manner, it may take some time to hit all the units depending on the region and carrier. Followed by the Retla Ocean, the Moto G7 Power Android 10 update now hits to Hungary (EU).

Updated on June 24, 2020: Motorola Moto G7 Power Android 10 update is finally rolling out on the Retla ocean. The update bumps up a new software version QPO30.52-29 based on Android 10. It brings all the Android 10 goodies with system improvements and other bug fixes. All the interested users can either wait for the OTA update notification or manually check for it.

The wait is Over Android 10 Moto G7 Power RETLA :) from MotoG

Updated on May 12, 2020: Finally, Motorola G7 Power Android 10 update is rolling out in some of the regions initially. The OTA update will hit other regions very soon in a phased manner. As of now, the Latin America and UK based Moto G7 Power users are receiving the update. Almost two months ago, Motorola has released the Android 10 Kernel Source Code for the Moto G7 Power model.

Therefore, some of the keen custom ROM users or early Android 10 testers had a way to install LineageOS 17.1 on Moto G7 Power. Coming to the official OTA update, it may take a while to arrive on all the regions completely and users have to wait for the update notification.

Updated on February 29, 2020: Motorola devices aren’t the best ones in terms of receiving firmware updates. While plenty of devices from other brands has already received the stable Android 10 update, there are some of the devices are in the queue and Moto G7 Power is one of them.

Recently, a Reddit user has reported that the Moto G7 Power has started receiving the latest February 2020 Android Security Patch update. It brings bug fixes and system improvements for the device. Therefore, it indicates that the Android 10 update is still cooking for the Moto G7 Power handset and may take some time to arrive on all units.

Good news for all the Moto G7 Power unit users as the company has finally started pushing the latest Android 10 update in Brazil. The firmware OTA update is making its way in a phased manner and it may take a while in order to arrive on all the units globally. Lenovo-owned brand Motorola has released the Moto G7 Power in March 2019 that came with Android 9.0 Pie preloaded. Now, all the interested Moto G7 Power users can download and install the Android 10 update below that bumps up a software version QPO30.52-29.

To be very specific, Motorola isn’t known for its software update policies as the brand can’t manage to deliver the on-time major Android updates or the frequent security patch updates as well. Even after launching the Android 10 stable back in September 2019, Motorola has managed to push the same for the Moto G7 Power when the Android 11 public Beta has already arrived. But it’s better late than never.

We will recommend you to check for the OTA update manually on an interval basis to get notified earlier. Meanwhile, you can manually flash the firmware update file by following the guide below. 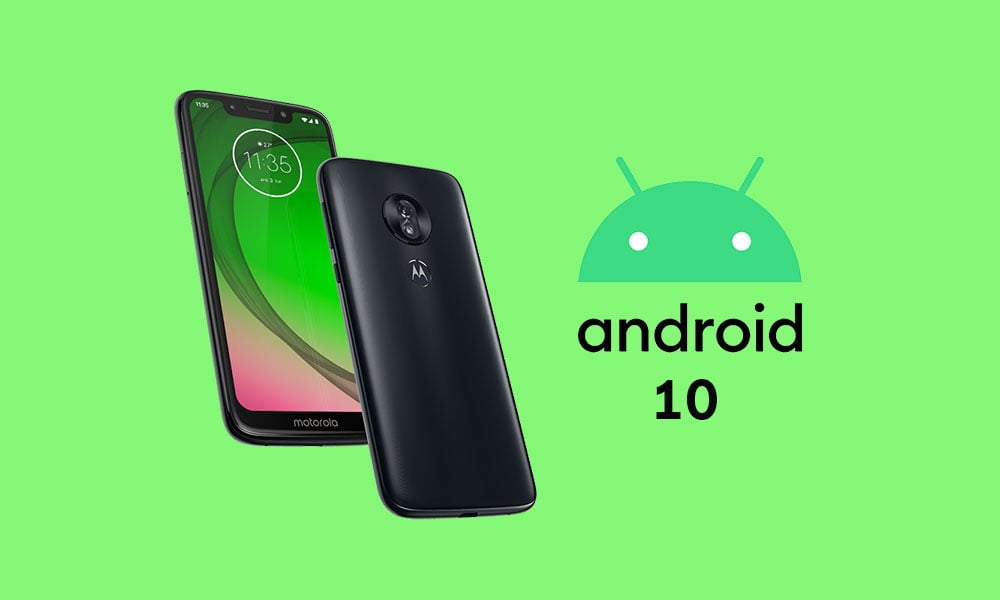 In order to check for the OTA update, head over to the device Settings > About Phone > System updates. If the latest update is available, tap on YES, I’M IN and wait for the update to install completely.

Ensure that you’ve connected your device to a Wi-Fi network and charged the battery fully. But if in case, you’re not getting the OTA update notification on your handset, then check below for the firmware flashing guide.

Still not received the OTA update for Android 10? then, don’t panic. Here we have the full firmware package and method to install the Android 10 firmware on your Moto G7 Power manually.

GetDroidTips won’t be held liable for any error or damage on your device by following this guide or flashing any file. Proceed at your own risk.

Let’s assume that you’ve installed or updated your Moto G7 Power to the latest firmware version successfully. Facing any issues? Comment below.