PS4 is undoubtedly the better console that released this generation. With several exciting exclusives, the console has a lot to offer for a variety of gamers. It’s been almost 7 years since the launch of the PS4, and finally, the PS5 is around the corner. Even though the PS5 is set to release in the coming few months, the PS4 still remains a great value proposition if you take into consideration the stuff it offers.

Also Read: How To Rebuild the Database On PlayStation 5 (PS5)

Many of us have bought the PS4 at launch, and with time, the console hasn’t been performing as it used to. That’s a pretty common thing that happens to hardware over time, and the PS4 is no exception to it. Users often experience unstable framerates, or choppy cinematics at times. This is pretty annoying for a user, and we often blame the game or the developer for it. However, that is not always the case. There are a few reasons which can lead to the degradation of the performance of the PS4. However, the good thing is that it can be easily fixed. The best way to fix it is via Database rebuilding.

Why do we need to rebuild the database?

The first question you might ask is, why should we rebuild the database of the PS4. Well, there are a number of reasons why you should do it. Most users keep their PS4 hard drive full of a variety of stuff, including clips, screenshots, and of course, games. These files become disoriented and fragmented. That leads to issues such as:-

So what does that rebuilding the database actually do, which helps in fixing these issues? Well, rebuilding the database is equivalent to defragmenting your hard disk drive on a PC. When we use the PS4 frequently, a lot of files get fragmented, which can lead to severe performance degradation of the PS4 over time. However, rebuilding your database can help re-organize those files and defragment your hard disk drive. Unnecessarily used up space gets freed up, and the PS4 gives the performance it should actually deliver.

What are the Steps to Rebuild Your PS4 Database?

If you want to rebuild the database of your PS4, follow the steps given below:- 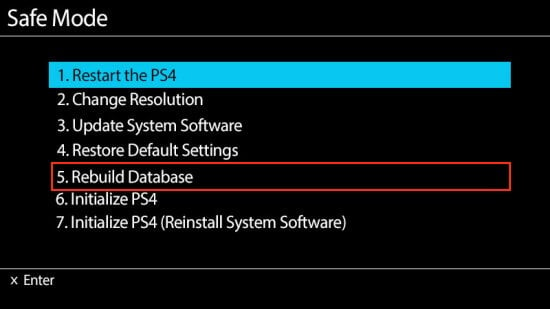 Is Rebuilding Your PS4’s Database Dangerous?

You might be wondering whether this is safe or not since it involves going deep into the software of the PS4. Well, first of all, we are doing it in Safe mode, and there is absolutely NO third-party stuff involved. We are just using the options given in the PS4 itself. Moreover, if you are worried about files getting deleted, then you shouldn’t be worried because the only files that may get deleted while rebuilding are corrupted files. So basically, you lose files you didn’t have access to in the first place. Nonetheless, if you are still paranoid about screwing up, you should stay aware. Rest assured, there is a very slim chance of screwing up anything.