Classes are one of the most important things in any RPG in general. And as we talk about Tiny Tina’s Wonderlands, it is simply one of the most amazing fantasy spin inspired by the Borderland 3. The game unleashes a bunch of enemies such as the bloodthirsty Goblins, gross mushrooms, and many more. And in order to survive in this dreamland of nightmares, you will require the best classes in Tiny Tina’s Wonderland.

Classes in role-playing games can be referred to as specific careers. Each class in Tiny Tina’s Wonderland comes with its own specific set of pros and cons making them unique in certain ways. Fortunately, Tiny Tina provides quite a few interesting classes to make your journey further adventureous. But on the other hand, it also makes it quite difficult to choose the best among them at the beginning. To resolve this confusion and to help you find the best-suited class, we are here with a complete guide on the various classes of  Tiny Tina’s Wonderland. 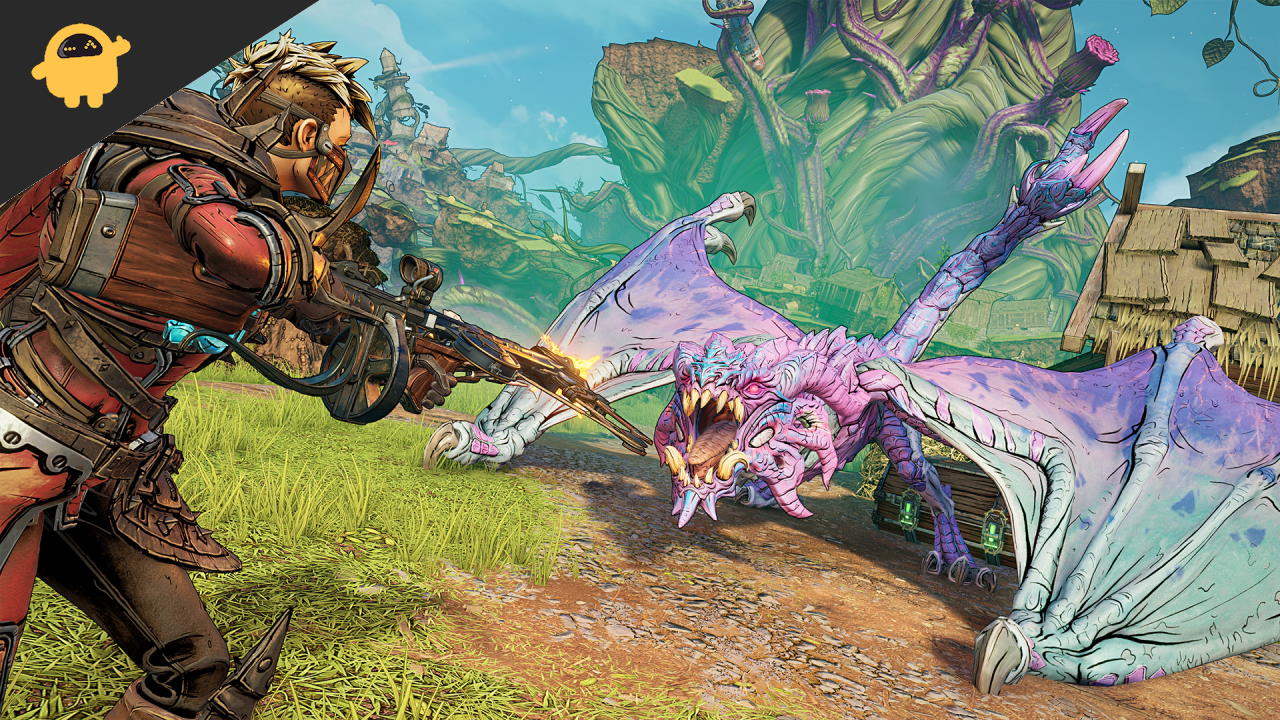 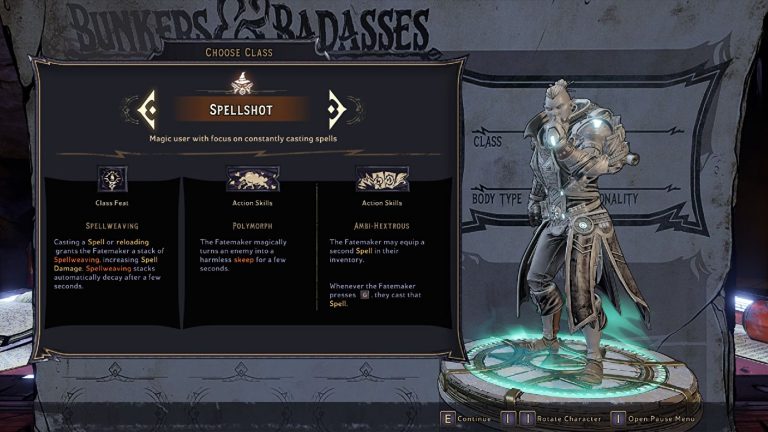 The spellshot class in Tiny Tina’s Wonderlands comes in the category of classic mage classes. It is dedicated to the spellcasters of the Wonderlands. It has two action skills and a single class feat known as Spell weaving.

The Spell weaving ability is the prior ability of the Spellshot class. It allows you to increase your spell damages each time you cast or reload one. What’s even more attractive about Spell weaving is that it allows you to earn more bonuses as you level up in the game.

Apart from that, its first Action skill, Polymorph, lets you turn enemies into harmless for a very short period of time. The second skill, Ambi-Hextrous, on the other hand, allows you to equip one more spell. It can be very handy in worse situations. However, you will have to level up in your game to unlock the Ambi-Hextrous action skill. 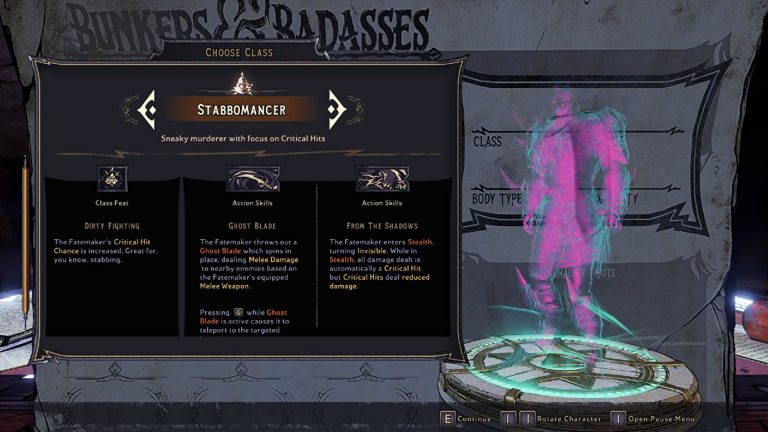 Unlike the Spellshot class, the Stabbomancer basically focuses on increasing your critical hit chances. Its class feat is all about the same allowing you to deal with more damage. With this ability, you can easily boost the power of your guns, spells, or melee to deal maximum damage with each shot.

Additionally, the Ghost Blade skill allows you to throw a spinning blade that causes some hefty melee damage to its nearby enemies. And one of the interesting action skills that Stabbomancer provides is ‘From the Shadows’. It lets you turn invisible as you deal with critical hits. Although it is a very handy skill, it does have its downsides as your damage rate is drastically reduced. 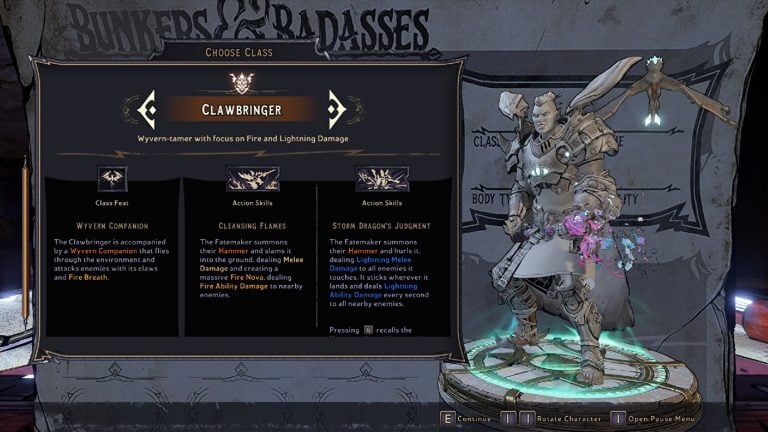 Coming out as the paladin class, Clawbringer, also known as Thor, majorly focuses on melee/ gun damage. It is indeed one of the best classes if you are specialized in a gun/ melee attacking or a spell casting playstyle. For spell-casters, Clawbringer allows choosing the failed Monk Twist of Fate and regaining the lost strength stats.

Clawbringer’s class feat Wyvern Companion provides you with a little dragon called Wyvern. The dragonflies over the battlefield and wreaks fire attacks on the enemies. On the other hand, its action skill, Cleansing flames allows you to summon a hammer.

This hammer causes melee damage by creating a massive fire nova when hit hard on the ground. Besides, the Storm Dragon’s Judgement, lets you throw a hammer inflicting lightning damage on any enemy it hits. 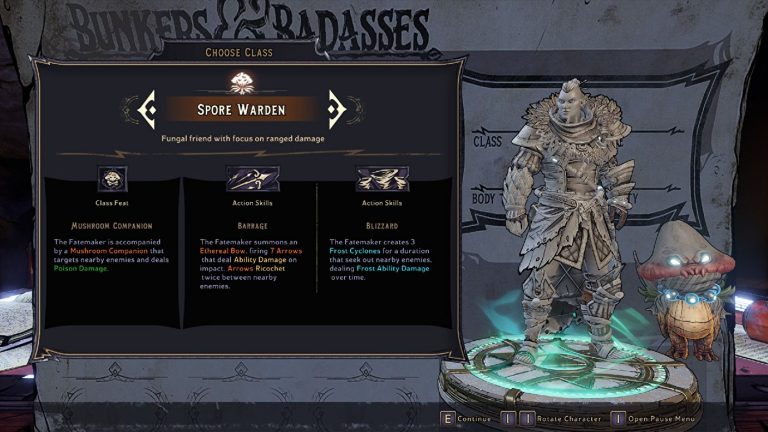 Moreover, the Barrage and Blizzard action skill adds more glory to this class. Both the action skills specialize in causing big damage to multiple enemies at a time. Barrage allows you to shoot seven arrows at most simultaneously which further reflects twice between the nearby enemies. the Blizzard action skill, on the other hand, allows you to shed three frost cyclones at once. These cyclones deals frost damage to all the nearby enemies.

Therefore, Spore Warden is considered one of the best classes in Tiny Tina’s Wonderlands. If you opt for a complete attacking playstyle and consider big attacks as of core importance, this is perhaps the best choice for you. 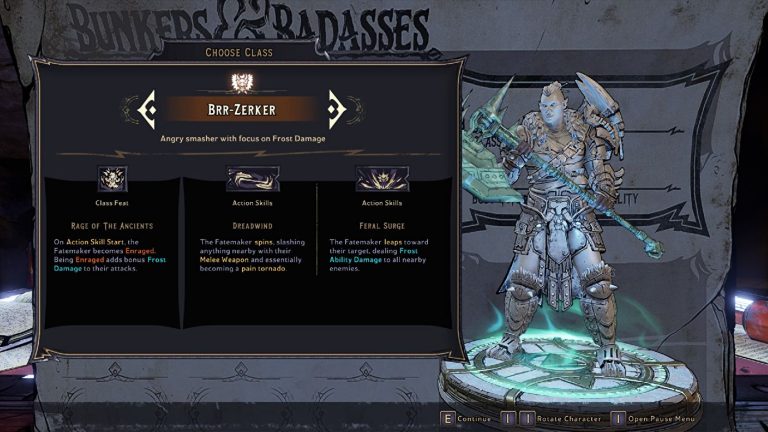 If you are not really into guns or shooting, then Brr-Zerker might just be the perfect alternative. Rather than dealing with only big damages, Brr-Zerker focuses on frost status damage. Firstly, the Range of Ancients class feat goes all wild and deals only bonus frost damage to each and every attack. Its action skill Dreadwind gives you the freedom to slash anything coming in your way.

As for the Feral Surge, it lets you leap forward and deal mostly with frost damage. More interestingly, the approach to Brr- Zerker is relatively easier and probably best suited for newcomers in Tiny Tina’s Wonderlands. However, one of Brr-Zerker’s weakest points is that its abilities won’t work during boss fights if there are no small enemies.

This will prevent you from leveraging all the abilities of the class and possibly stop you from reaching max damage potential which can have an effect during the battle. 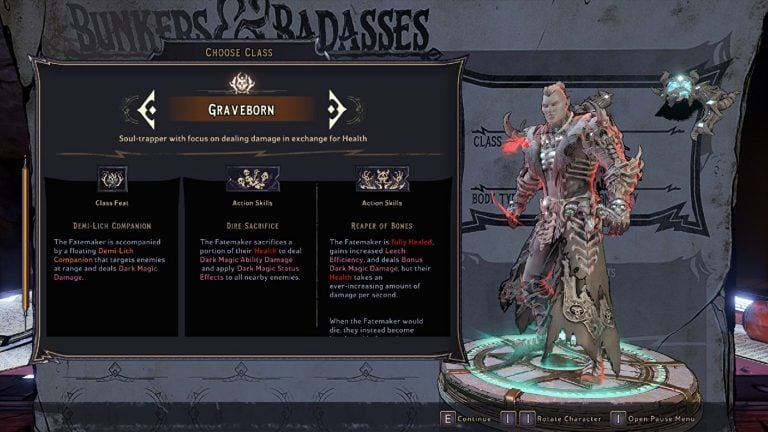 If you are into dark energy, black magic, or any such thing, you might like the Graveborn class. In a nutshell, Graveborn class mainly depends on dark magic and all other stuff. It even lets you play as the evil character in the game, certainly adding some extra spice to the Wonderlands.

Tiny Tina’s Wonderlands basically deals with dark spells causing dark damage to enemies at a huge rate. You will also get a Demi-Lich companion, a floating buddy who deals in dark magic damage.

Besides, Graveborn’s dire sacrifice action skill allows sacrificing some portion of your HP in return for more dark power. You will receive dark damage that can kill all the nearby enemies, plus apply for dark magic status on them as well. Moreover, the reaper of bones is another great skill that helps you fully heal your lost strength and acquire more dark damage. Overall, Graveborn is considerably strong and has the ability to take down even the best of the best enemies.

In the end, we have seen all the six classes in Tiny Tina’s Wonderlands and discussed their true abilities. Each class certainly has a different set of abilities making it superior to another. You can go for any of them based on your playstyle. However, if you are not sure enough about that and still want a genuine suggestion, we would say, the Spore Warden should be your first choice to go followed by Graveborn.