Valorant users are currently facing couldn’t start issue along with some other runtime codes. The game is an upcoming free-to-play first-person shooter game developed and published by Riot Games for Microsoft Windows? This is the second game from Riot after their ever-popular League of Legends. And this is the reason why the game is so anticipated among enthusiasts. However, closed beta testing is available for certain regions only, and the enthusiasts are unable to try their hands on it from many places.

Now moving onto the gameplay, there are several issues being reported about the error and glitches by the beta testers. Riot Games promises to fix them before the launch of the game all over the world. But due to the ongoing pandemic, the launch dates are not sure. Anyway, the launch is still expected to be in the mid-summer sometime. The game has undergone a crash again today, and users are complaining and questioning its stability issues as we know that Riot Games is trying its best to fix everything, but still, some errors do creep in. However, we have brought a way to pull the users out of this problem with a set of fixes that will resolve this issue. 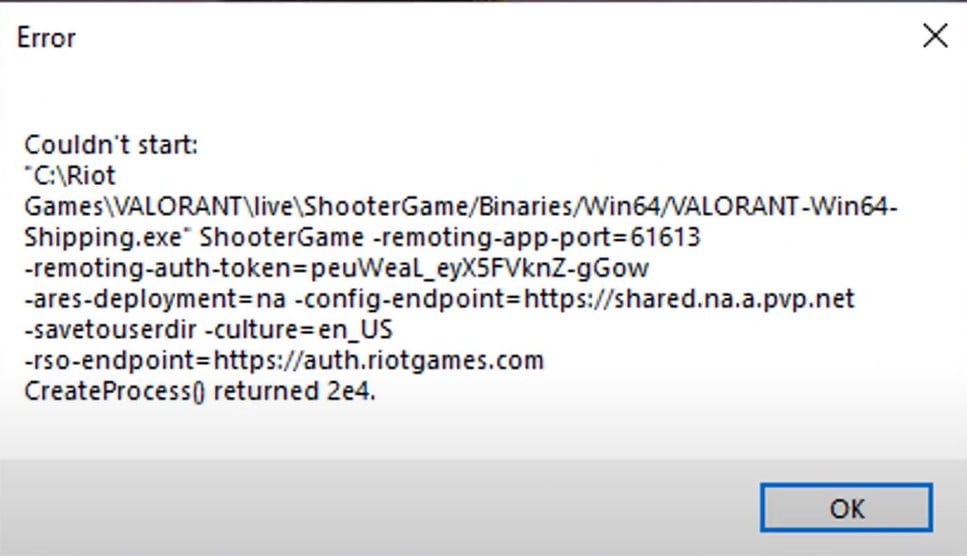 The issue is again, a critical bug. Whenever the user starts the game, there is an error code window displayed which says “Couldn’t start” with some other runtime codes. The issue is coming every time they are trying to start the game. And restarts did not solve the game. So we decided to bring up a tried and tested fix that we did. The users need to follow the steps we describe below in the below fix guide, and their issue will be solved.

How to Fix Valorant Couldn’t Start?

Now we will start troubleshooting Valorant with the fixes below. We urge everyone to read the guide carefully and follow the fixes in accordance to fix them as fast as possible and resume their gameplay.

How to Fix Valorant Stuck on Loading Screen: Infinite bug

Probably the best thing to fix Valorant is run it as an administrator. This is due to the reason that the game is still in its beta stage, so it does not have that kind of internal library modules built in to help interact with all the resources. But to run this game as an Administrator, you have to do it in a different way. Follow the steps below to do that. 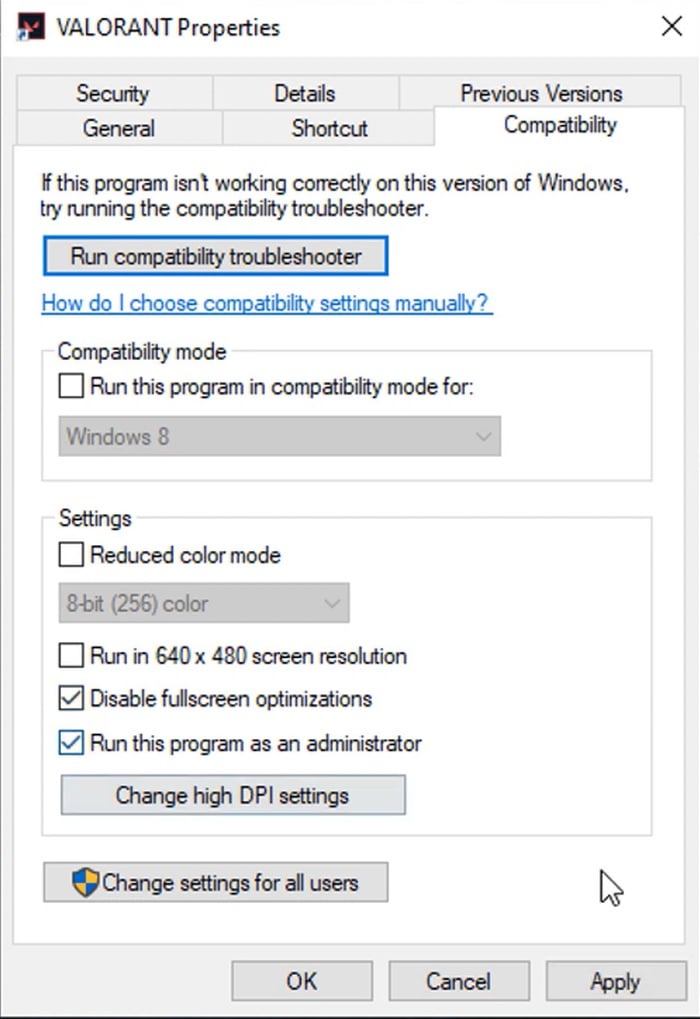 Now you can start your game and see it working normally like before. However, if this did not work, our next and last fix probably will. 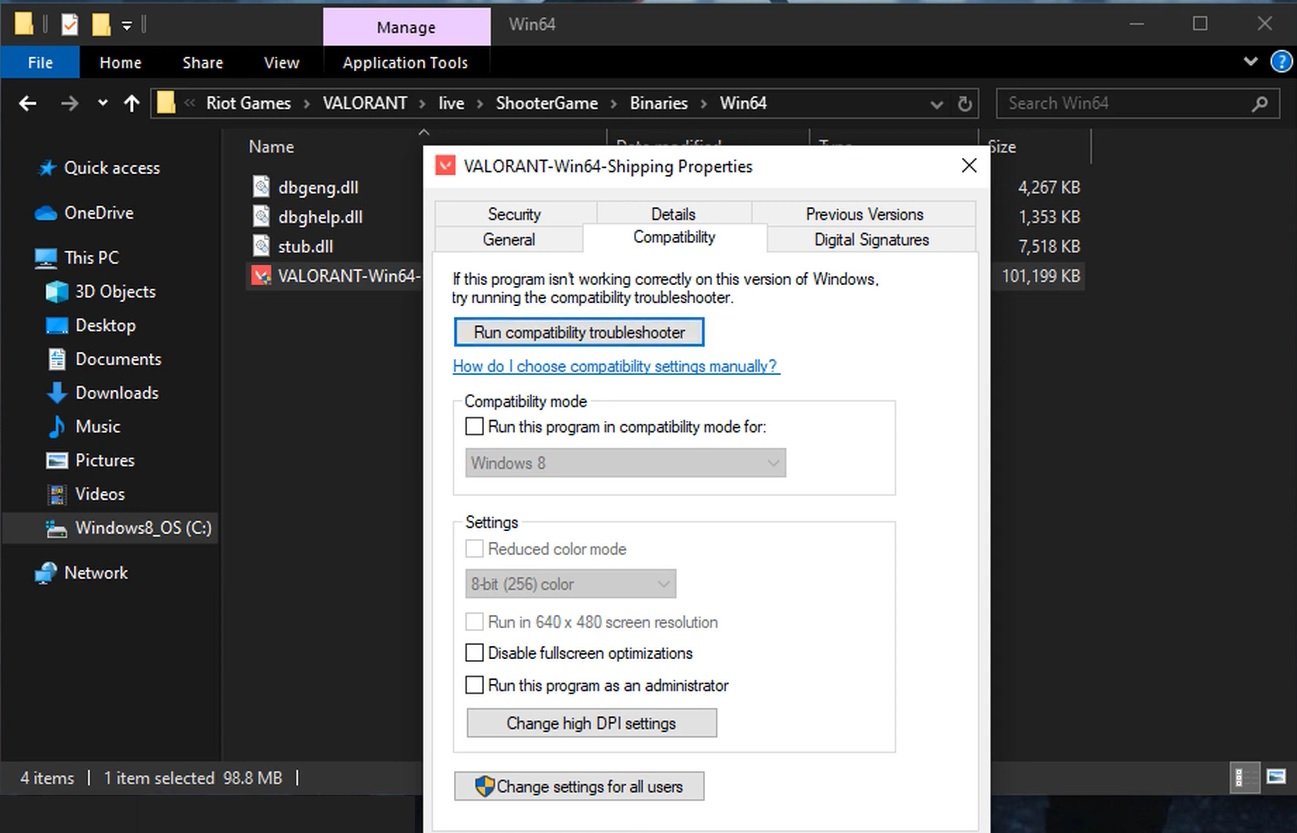 In some cases, the above fix only works with the shortcut icon. Sometimes the settings are not changed for the game directory. And there lies the actual problem. In that case, you have to change the settings from the internal directory where the game is installed. To do this, follow the steps below.

Now you won’t experience any hiccups during the starting of the game, and your matchmaking will start.

There are still a lot of issues going on with Valorant. And most of the fixes we discussed seem to be working with a success ratio of 60:40. We found out that the best way to get rid of crashes is to lowering the graphics in the game.

Try to set all the video settings option to low along with textures and shadows as well. This will most probably get you rid of all the issues that you are currently facing. Moreover, you computer configurations don’t seem to play a major role here as the requirements for Valorant are pretty low. Try out this and get your issues fixed.

This guide was to help the users who were facing an error of “Couldn’t Start” whenever they were trying to start Valorant. After following our fixes carefully, they will be able to resolve their issue. We hope our guide helped you.  If you have any queries or feedback, feel free to comment down below with your Name and E-mail ID. Likewise, check out our iPhone Tips and Tricks, PC tips and tricks, and Android Tips and Tricks for more such tips and tricks. We urge you to participate in the $100 giveaway by subscribing to our YouTube Channel. Thank You.