Picture this – after a hard day of work, you sit down to enjoy some time on your own; just then, your iPhone rings & it’s some annoying caller trying to sell you credit cards. Happens to the best of us, right?

Well, that doesn’t have to be the case. After all, phones are meant to connect you with the people you love. But, what happens when you keep getting calls or texts from people you want to avoid? If you’ve had it with answering unnecessary calls, your iPhone makes it easy to get rid of such pesky calls.

The iOS comes with built-in contact blockers. And, it’s pretty easy to use. Moreover, the process is completely reversible.

In this article, we’ll show you how to block and unblock phone numbers on your iPhone.

A side note – a common question I see on the internet is, “What’s the difference between blocking a contact and putting them on DND?”. Well, blocking numbers and activating Do Not Disturb (DND) mode are two separate things. While blocking a number prevents any future incoming calls and texts, DND merely mutes the notifications. 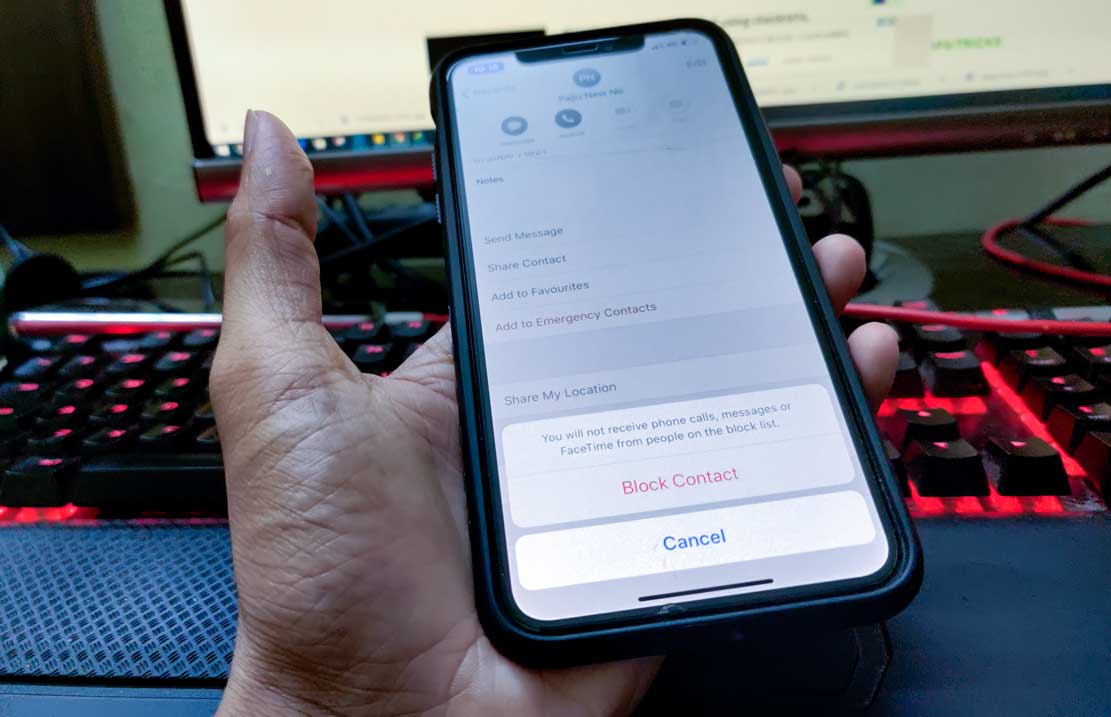 How to Block A Phone Number on an iPhone?

The iPhone offers you multiple ways to block contact. Here, we’ll tell you all the possible ways.

4. Block a Phone Number from the Settings App

How to Unblock a Phone Number on an iPhone?

Blocking numbers is one of the easiest ways to get rid of nuisance calls and texts. But, sometimes, it is possible to block someone by mistake. Well, fret not, as unblocking a number is just as simple.

You can easily unblock a number by going to the Settings > Phones > Blocked Contacts (just like mentioned above). Here, you’ll find a list of all the contacts that you’ve blocked. There’s an option to edit this list at the top right corner. Tap on it.

You’ll notice a red circle with a subtraction sign in the middle before all the numbers. Tap on it and a red Unblock button will appear next to the number. Tap on it to unblock that number.

Alternatively, you can also unblock a number by going into your contacts list > contact > Tap the Information icon > Scroll to the bottom and Tap Unblock this Caller.

How to Silence Unknown Callers?

It’s one thing to block a known contact, but blocking spam callers is not that easy as spam calls can come from multiple phone numbers. To combat this issue, Apple has added an option to silence calls from unknown numbers.

Here’s how to enable it.

Once this feature is on, calls from unknown numbers will be sent straight to voicemail; you won’t even hear the phone ringing. The only way you’ll know about the call is if you see it in the recent calls list or, in case of a voicemail, look for it in the Voicemail Inbox.

What Happens When You Block A Number?

Calls from a blocked contact go directly to the voicemail. The iOS creates a separate folder named “Blocked Messages” in your Voicemail Inbox to store voicemails from blocked contacts, which you can listen to. Moreover, everything will seem normal to the caller.

In case of a text message, it will look to the sender like the message has been sent. Yet, it will not be shown to you.

Well, there you have it, now you know how to block and unblock numbers on your iPhone. As mentioned above, there are multiple ways to block a number on iOS. The good news is that blocking a number from one app (like Phone) will automatically block it everywhere else (like Messages & FaceTime).