Xiaomi Mi 6 (codename: sagit) launched in April 2017. The phone came out of the box with Android 7.1.1 Nougat. Do you want to Install any Custom ROM for Xiaomi Mi 6 device? then you are at the right place. Here we will list all the Custom ROM for Xiaomi Mi 6. If you have a Xiaomi Mi 6 device, then you may be knowing that this device runs on Android OS. Well, the biggest advantage of Android is that it is an open-source project. This allows every community to develop and Customize ROM for their phone.

Talking about the specifications, Xiaomi Mi 6 features a 5.15-inches display with a screen resolution of 1080 x 1920 pixels. It is powered by a Qualcomm MSM8998 Snapdragon 835 processor coupled with 4/6GB of RAM. The phone packs 64/128GB of internal memory. The camera on the Xiaomi Mi 6 comes with a dual 12MP and 8MP front shooting cameras. It is backed by a Non-removable Li-Po 3350 mAh battery with Fast battery charging (Quick Charge 3.0). It also has a Fingerprint sensor in the front. In this guide, we will show you which are the best custom ROM for Xiaomi Mi 6 available now. 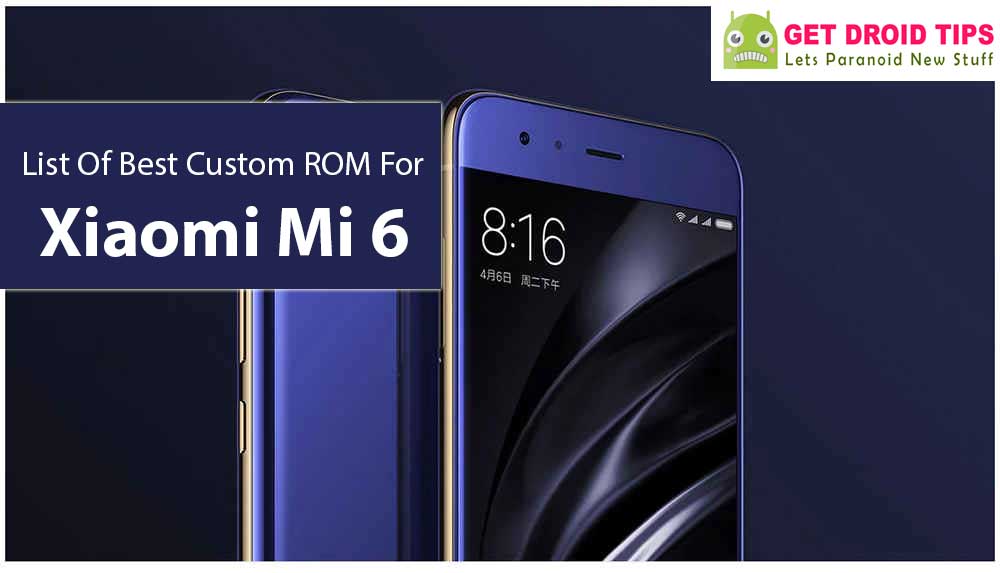 If you have TWRP, then you can simply flash one of the best custom ROM for Xiaomi Mi 6 here. As we said, there are many custom ROM out there to choose from. Not every Custom ROMs are mean to be stable to use as a daily driver. You can read the description and the features that come with the custom ROM given below for Xiaomi Mi 6 devices.

You can follow the link to Install Lineage OS for Xiaomi Mi 6 device.

BlissROMs come with a wide selection of customization options from around the Android community. Apart from that, it has also added some of its own unique features to the ROM. The stable build of this ROM is based on Android 10 (or Android Q) and brings with it all the goodies that the said Android build has.

“Bhinneka Tunggal Ika” Nusantara Project is a smartphone customization project on the Android operating system or better known as AOSP. The name Nusantara is inspired by the terms owned by the Indonesian state.

DotOS is a simple abbreviation of the term Droid On Time Operating System. The ROM is developed by XDA member Miftahzy98, in XDA forum. The main developer behind the dotOS community and team members are Ganesh Varma and Kuber Sharma. The ROM brings many new tweaks and features and also merged some features from Best Custom ROM.

Flyme is a stock and aftermarket firmware developed by Meizu for smartphones based on the Android operating system. Some of its key features are completely redesigned apps, one-handed usability, and performance optimizations. The current version of Flyme features a distinguished flat design and various optimizations for performance.

Nitrogen OS is the latest Custom ROM which brings amazing features with a Stock Android experience just like the Pixel smartphone. Now you can install NitrogenOS on Xiaomi Mi 6 by following this guide.

As the name suggests, ROM brings the real Google Pixel experience on Xiaomi Mi 6 (sagit). It has all the features and applications which comes out of the box with Google Pixel smartphone. Now you can experience the real Pixel Smartphone with this ROM

That’s it! I hope you have installed the Custom ROM for Xiaomi Mi 6. Leave a comment or feedback down below. Thank you!.

I hope this guide was helpful to find the Best Custom ROM for Xiaomi Mi 6 which is suitable for you.

Want to revert back to Stock ROM, Check out this tutorial on How to Install Stock ROM on Xiaomi Mi 6