With the Pokemon GO Throwback Challenge live, Obstagoon makes its addition to the game. By hatching Zigzagoon through the 7-Kilometer eggs, all the trainers have the chance to evolve it into Obstagoon in Pokemon GO. As most players in Pokemon GO might’ve already evolved and got Obstagoon, the next necessary step that they should take is finding the best movesets for Obstagoon to use in battles.

We’ll get right to the point without bragging too much. For the charge moves, the best choice is to go with either Cross Chop or Night Slash. There are plenty of other charge moves that this Pokemon can learn but out of them all, Cross Chop and Night Slash are fairly better and effective. When it comes to fast attacks, the Obstagoon knows Counter and Lick but counter proves pretty effective among the two. So going with counter and cross chop, and counter and night slash is pretty much an effective strategy that you can use. 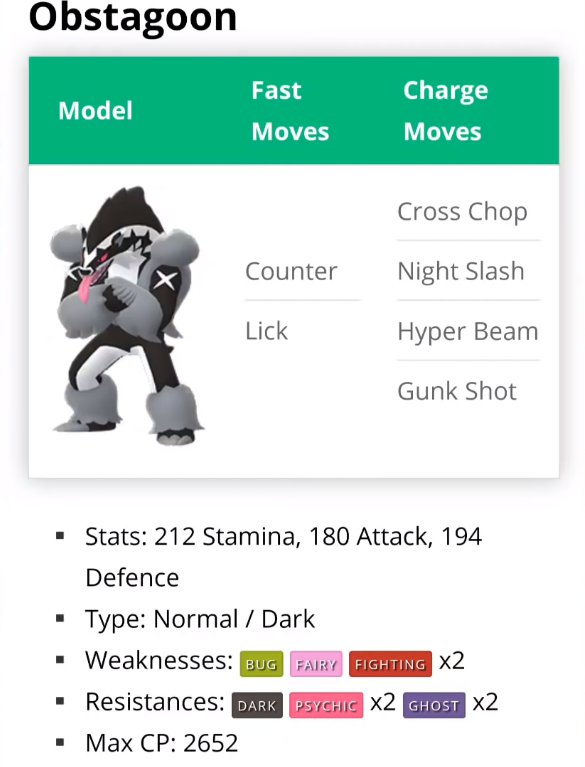 The Obstagoon is a Dark and Normal-type Pokemon. The stats of this Pokemon aren’t that impressive but it will manage to fight well against Dark, Psychic, and Ghost-type Pokemon. This Pokemon wouldn’t really stand a chance against Bug, Fairy, and Fighting-type Pokemon so you should consider throwing this one into battles only after studying your opponent.

The Obstogoon is a Dark and Normal-type Pokemon in Pokemon GO. Taking its nature into consideration, it proves strong against Dark, Psychic, and Ghost-type Pokemon. Furthermore, it is weak to Bug, Fairy, and Fighting-type Pokemon. When it comes to the moveset, Counter is a better choice in fast attacks. Moving onto charge moves, you can go with either Cross Chop or Night Slash. That said, we hope reading the guide above has brought some valuable information and help to you. Please let us know by commenting down below if you have any further queries regarding the same.