Samsung has released the Galaxy A71, which packs in some decent mid-range specs. For instance, you get a Snapdragon 730 processor with 6/8 GB of RAM, a massive 4500 mAh battery, a 6.7-inch Super AMOLED Plus capacitive touchscreen, and up to 128 GB of onboard storage.

Samsung finally started pushing their new major OS update, One UI 4.0 for the Galaxy A71 based on Android 12. The update is now started rolling around the globe.

As per some reports, it is said to be rolling with build number A715FXXU8CVC3 for users around the globe. Samsung has included the latest March 2022 Security patch, which fixes many security bugs and vulnerabilities. 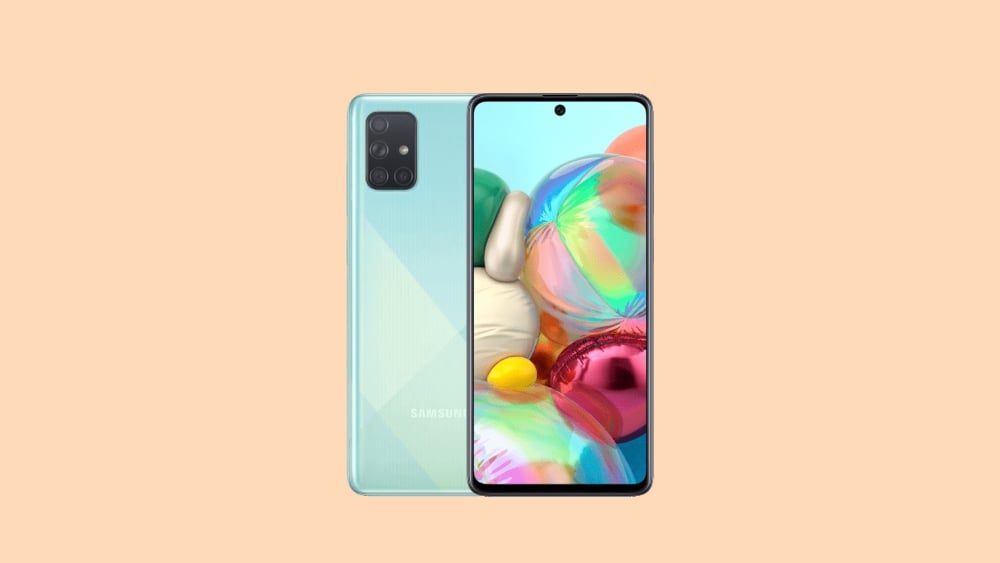 The Samsung Galaxy A71 sports a 6.7 inches Super AMOLED display with an FHD+ resolution i.e., 1080 x 2400 pixels. It has a screen-to-body ratio of 87.2 percent, an aspect ratio of 20:9, and a pixel density of 393 PPI. The display also has an under-display optical fingerprint scanner, which is also protected by this old Corning Gorilla Glass 3.

Underneath the Samsung Galaxy A71, it sports the Qualcomm Snapdragon 730 SoC, and this SoC is built on the 7nm process. On the GPU side, it has the Adreno 618, which is 30% faster compared to the old Adreno 616. The device has 6GB and 8GB of LPDDR4 RAM and 128GB of UFS 2.1 internal storage. This is further expandable via a micro SD card up to 1TB. The device has a dedicated type SIM card slot where you can insert two Nano types of SIM cards and a micro SD card simultaneously.

Coming to the optics, the Samsung Galaxy A71 has a quad rear camera setup which gets arranged in a vertical setup ( in an L shape ) to the left of the device along with the flash module. This rear camera setup includes a primary 64MP In-house Samsung GW1 sensor with f/1.7 aperture value, PDAF, and also for Electronic Image Stabilisation ( EIS ). This sensor pairs with a secondary 12MP ultra wide-angle sensor with an f/2.2 aperture value. And it has a tertiary 5 MP depth sensor with an f/2.2 aperture value, which will be used for taking portrait shots.

The Samsung Galaxy A71 packs a large 4,500 mAh battery that charges over a USB type C port. This battery also supports 25W fast charging tech from the brand. Sadly the device doesn’t come with support for other charging facilities like wireless charging, reverse charging, and many others. The device runs on One Ui 2.0, which is based on the latest Android 10. Coming to the biometric options, the device comes with an in-display fingerprint scanner and also face unlock. Connectivity options include Wi-Fi 802.11 a/b/g/n/ac/ax, dual-band, Wi-Fi Direct, hotspot, Bluetooth 5.0, A2DP, LE, GPS with A-GPS, GLONASS, BDS, GALILEO, NFC (market dependant), FM radio, and USB 2.0, Type-C 1.0 reversible connector, and many more.

Of course, the Samsung Galaxy A71 came out of the box with Android 10 and later received the Android 11 update. According to Samsung’s recent policy change, their device will get three years of major OS support and four years of a security patch update. As promised, finally, Samsung started rolling their One UI 4.0 update to their flagship and feature-rich smartphone.

One UI 4.0, which is based on Android 12, brings an entirely new UI design with a simplified color palette feature and the game-changer Android 12’s material YOU design that lets users significantly personalize the look and feel of the UI. The dark mode is now been expanded to all app icons, and the camera UI adds ease to use and is better than the last version.

Updated on November 11, 2022: Samsung started rolling the new update, bringing the September 2022 security patch update for the device with software version A715FXXU8CVI4. The update is based on Android 12.

Updated on April 16, 2022: Today, Samsung rolled their first One Ui 4.0 update to users around the globe with software version A715FXXU8CVC3.

Updated on May 17, 2022: Samsung started seeding April 2022 security patch update for the device with software version A715FXXU8CVD1. The update is based on Android 12.

Updated on August 02, 2022: Samsung started seeding June 2022 security patch update for the device with software version A715FXXS8CVF2. The update is based on Android 12.

Steps to Install Android 12 on Samsung  A71

Before we get straight to the steps to flash the One UI 4.0 update based on Android 12 on your Samsung Galaxy A71, let us take a look at the pre-requisites first.

Now, let’s look at the Steps to flash Android 12 on the Samsung Galaxy A71.