The updates are being continuously updated on top…

Registration for the same has already started and in limited slots of users available via Samsung Members account for the users in China, the US, the UK, South Korea, Poland, and Germany. [Source]

Update as of September 9: Samsung was able to release OneUI 4.0 Beta update for Galaxy S21 series today i.e. September 9. However, it has been postponed and thus, Galaxy S21, S21+, and S21 Ultra users will have to wait for the beta program to commence which is likely between September 9 to October 29 which also means a stable release will be carried on to eligible flagship models in early November.

Update as of September 8: We have received two new updates regarding the OneUI 4.0 based on Android 12. Turns out the Samsung Email app has received Android 12 support which takes us closer to the imminent launch of OneUI 4.0 Beta this month. The support has been added to Samsung Email app with v6.1.51.1. [Source]

Update as of September 7: Samsung is certainly inching closer to OneUI 4.0 based on Android 12 as it has updated its Global Goals app with Android 12 support. It brings some UI changes as well. Android 12 is likely to be launched as a stable version this month or earlier next month. Post that, Samsung will unleash OneUI 4.0 beta on more models as it is currently testing it internally on some models in the S21 series. [Source]

Update as of September 3: As OneUI 4.0 Beta is believed to be released internally in China, information is being leaked out. Ice Universe has shared a screen grab showing a new charging animation as seen on OneUI 4.0 Beta. [Watch the video]

Update as of September 02: According to the latest info by leakster Ice Universe, the Samsung Galaxy S21 Ultra has already received Android 12-flavored OneUI 4.0 as an internal version in China. The update has a build number of ZUHI weighing at 2244.40MB. [Source]

Update as of August 27: Android 12-powered OneUI 4.0 is now arriving as a beta update to Samsung employees. This brought One Hand Question+ app to v4.7.31 with Android 12 hinting that the OneUI 4.0 beta is releasing soon.

Update as of August 26: A Geekbench listing has appeared online featuring Samsung Galaxy S21 Ultra running on Android 12. The scores are 1122 and 3469 points on single-core and multi-core tests respectively.  It is safe to assume that the OneUI 4.0 isn’t that far from arriving on Samsung devices.

Update as of July 28: Based on the latest update coming from Samsung, the South Korean giant has asked users to sign up for the Android 12-powered OneUI 4.0 beta program in the home country for Samsung Galaxy S21, Galaxy S21+, and Galaxy S21 Ultra. Note that the actual date when the stable update will arrive is not yet revealed, however, given the fact that OneUI 3.0 arrived in mid-December while its open beta commenced in late October last year. This gives us roughly one and a half month approximately. 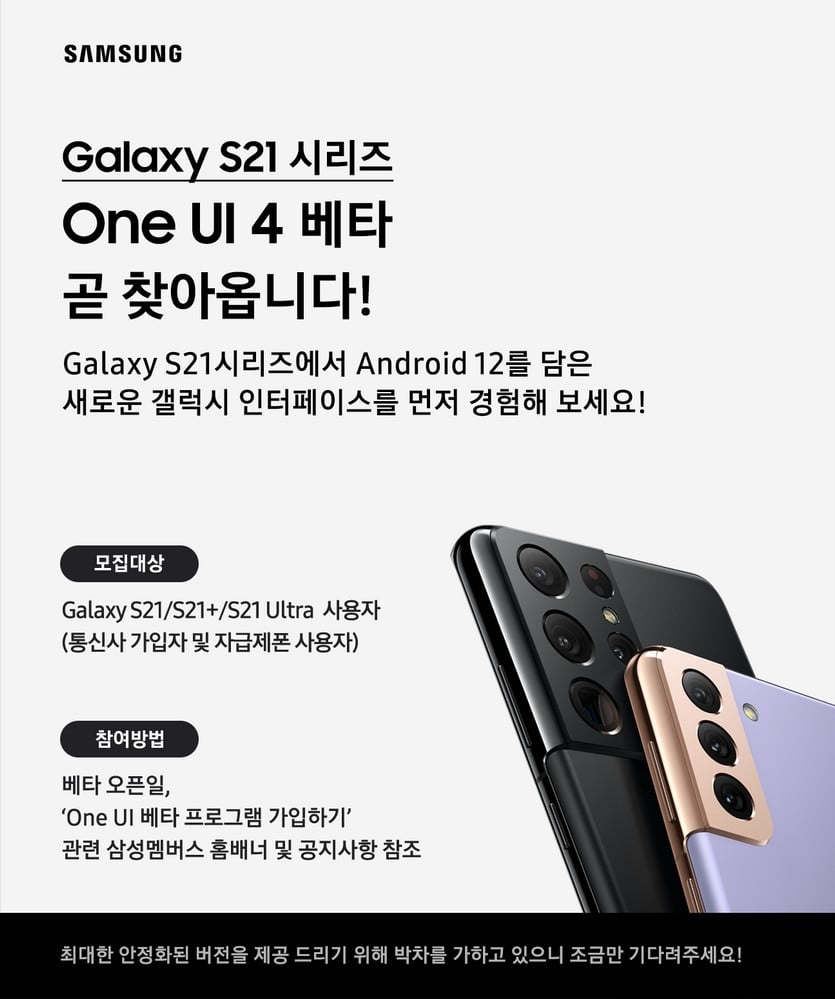 (2): Looks like Samsung Galaxy Tab S8+, and S8 Ultra along with the Galaxy S22 series will arrive with Android 12-backed OneUI 4.0 out-of-the-box as per a popular leakster Ice Universe. [Source]

Apart from that, Samsung is also developing OneUI 3.5 that is likely to arrive on Samsung Galaxy Z Flip 3 and Z Fold 3 once both the device’s debut.

Last year in 2020, Samsung has officially released its third-generation One UI lineup called One UI 3.0 which was based on Android 11. Additionally, Samsung has also announced that a bunch of eligible Galaxy lineup devices will receive three years of Android updates officially. Now, if you’re a user of Galaxy device’s from 2019 or later, you should know which Samsung device will get the One UI 4.0 based on Android 12.

As we’ve already mentioned above that Samsung has released One UI 3.0 last year on top of Android 11, the One UI 4.0 skin is on the way which will be based on Android 12. Needless to say that the next-gen skin will include more improved functionalities, visuals, all the native Android 12 features, etc.

It’s also worth mentioning that Samsung is doing a great job in terms of pushing continuous software updates to its devices. As Google has already released the Android 12 Developer Preview build for its eligible Pixel devices, more & more OEMs will start developing their own skin based on it. Samsung is one of them and we’ll start seeing beta releases around October 2021. 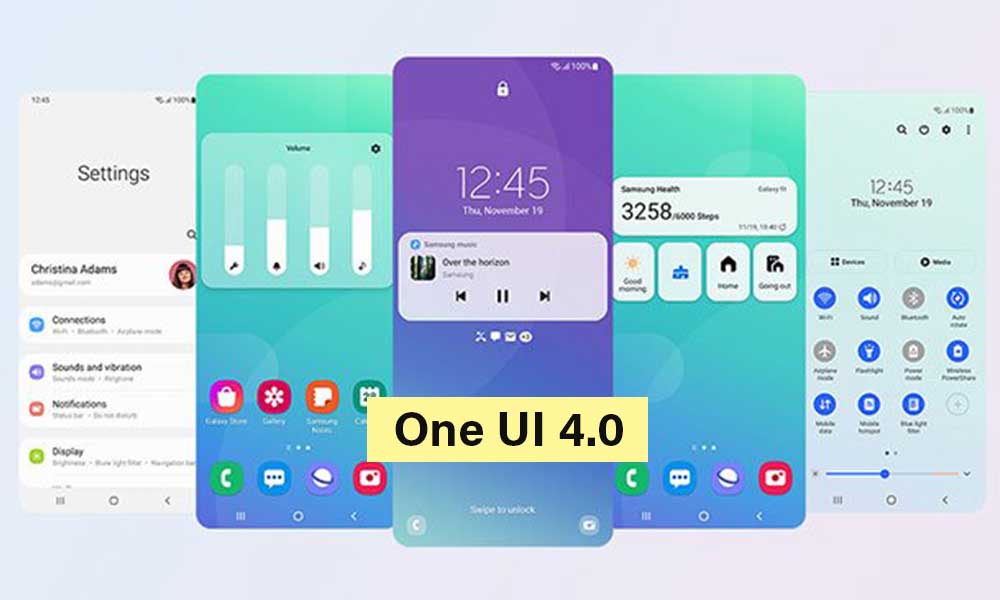 Whereas One UI was actually introduced by Samsung to improve the user experience on bigger display devices of Galaxy lineup. As the smartphone generation has moved towards higher aspect ratio screens, lesser notch or chin area, foldable displays, dual displays, etc, Samsung is more focused on one-handed operations with the One UI skin.

As we’ve already mentioned above that Google has released the Android 12 Developer Preview build for its eligible Pixel models. This also indicates that Google is allowing other OEMs to start developing and testing their builds for the upcoming Android version to optimizing the UI & apps.

Although Samsung hasn’t mentioned the particular Galaxy models to receive the official Android 12 stable update in the near future, we’re expecting the following models should gonna receive the same. Meanwhile, three years of Android OS update and four years of security patch update announcement have turned on the heat for sure.

Please Note: This isn’t official yet. So, the mentioned device list may change without any prior notice whenever Samsung officially announces the One UI 4.0 eligible device list.

Update as of September 14: Samsung Galaxy S21 is now taking up registrations for OneUI 4.0 Beta based on Android 12 in the US, UK, China, South Korea, Germany, and Poland. [Source]

Update as of September 14: Samsung Galaxy S21+ is now up for registrations for Android 12-backed OneUI 4.0 Beta in South Korea, the UK, the US, Germany, China, and Poland.  [Source]

Update as of September 14: The Samsung Galaxy S21 Ultra is now picking up Android 12-powered OneUI 4.0 Beta in China, Poland, South Korea, the US, the UK, and Germany.  [Source]

Other Samsung Devices That Will Get Android 12-Powered OneUI 4.0

Must Read: How to Install Android 12 Beta

This year we can expect that Samsung will release its One UI 4.0 early beta build around October 2021 after the stable release of Android 12 officially. Whereas if the beta version seems smooth enough, Samsung should start pushing the stable version in November or December 2021 expectedly.

Samsung is also known for pushing the latest Android OS version with the latest One UI skin to its eligible devices across all regions quite faster than other OEMs in the past couple of years. We hope Samsung will continue this trend more efficiently.

That’s it, guys. We’ll keep updating this article whenever new info or official announcements releases. We assume this article was useful to you.

Make sure to bookmark this page stay updated with us. For further queries, feel free to ask in the comment below.