WhatsApp has been continuously inspiring lives since its introduction. Moreover, else everything is history. It is prominently the most widely used instant messaging and chatting application worldwide. 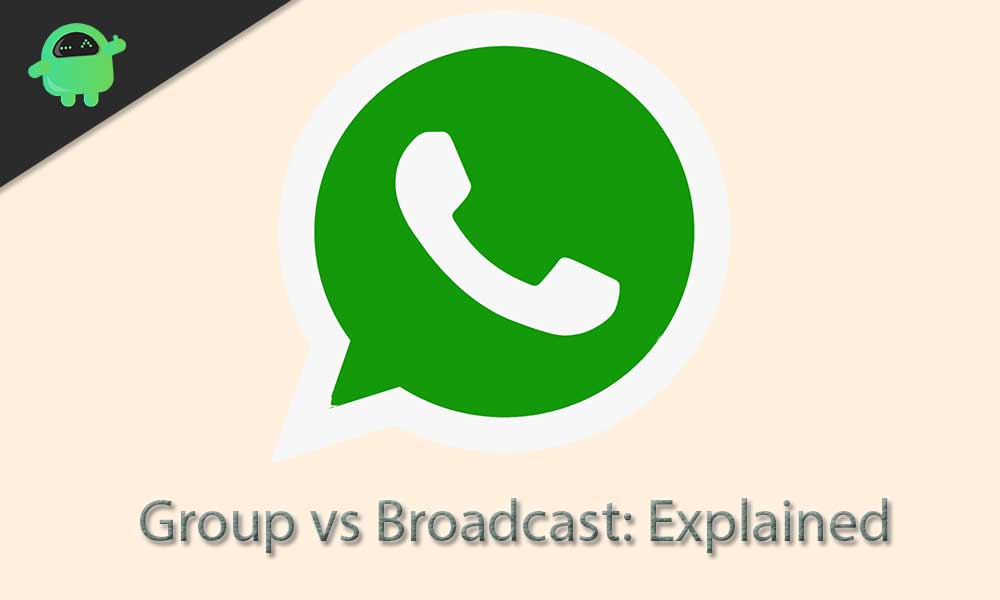 Difference Between What­sApp Group vs. Broad­cast

WhatsApp Groups and Broadcasts all have their specific Group of an audience as well as users. But as heard from most of the users, they are a bit confused about using Groups or Broadcasts. So to clear everything in between, our comprehensive guide will solve all this issue. We will discuss each criterion upon which a difference is based.

Just like the name suggests, the WhatsApp Group is like a big joint family. They conversate, exchange their thoughts, and many more that only people are living together. The same case lies with the WhatsApp Group itself. They usually reply and chat using the same chat thread with everyone replies to the same thread.

While the case with WhatsApp Broadcast is completely different, when the Broadcaster sends a message, it is received by everyone added in it, although the replies are sent using individual chat mechanism. In simple words, replies are individual, and private messages do not relate to others added in it.

As we already said, replies in the Group belong to the same chat thread, this means, the chatting is Group is a 2-way system which involves receiving and sending the message across all the members of the Group and thus received and read by all.

Although receiving chats in a Broadcast is kind of the same, still, if some other member who is not the Broadcaster sends the message, it will be private and confidential to the sender and the receiver itself. It is a 1-way system and involves no other third party interaction. So in this sense, we can term it better.

WhatsApp Groups cannot come near to Broadcasts whenever it comes down to privacy. All credit goes to the 1-way feature that no one else can interrupt. However, we cannot let down WhatsApp Groups as well, you can tap on the name and send them private messages, but still, the concern of privacy is there.

Whenever someone sends a message in a WhatsApp Group, notification is received by all its members. However, the case in WhatsApp Broadcast is also the same, but in a different manner.

In Group messages, the notification comes for the Group as someone sent this, while in Broadcast, the message comes as a notification of private chat. That’s a mere difference, but due to this, some people tend to ignore Group messages when there are a lot of chat counts.

Whenever a new member is added into Groups, each and every member is informed about it. Like if someone from your college Group adds another one, you’ll receive the notification confirming, the admin has added this person. This is completely different in the case of Broadcasts. Only the Broadcaster knows who they have added. Moreover, even the person who has been added won’t get a notification. That’s quite weird, but that’s what it is.

Admin or Administrators are the ones who manage the Group and adds new members. They are responsible for recruiting other admins as well. However, in Groups, there can be multiple admins, while in Broadcasts, the case is different. Only the primary Broadcaster is the admin. Actually, we cannot call them admin, since they just send a 1-way message just like an individual chat.

In a WhatsApp Group, members can leave or exit the Group as well as delete the complete Group chat. Moreover, the admins can become remover members and can even delete the Group by their choice.

But in the case of Broadcasts, admin can add or remove the members. Unfortunately, members cannot leave a Group. For that purpose, the members need to delete the admin from the contact list, and this way, you can get rid of a Broadcast.

In WhatsApp Groups, the maximum number of members can be up to 256, including the admins, while in Broadcasts, the member count can be extended up to a whopping 1024. This sounds quite interesting and makes it better. Moreover, enabling you to send messages to 1024 different people at the same time. But all the members in a WhatsApp Group can be promoted into admins. But in Broadcasts, that’s not even possible.

Here are some pros and cons which will help you with a better understanding of which to choose.

Both WhatsApp Groups and Broadcasts are good in their own places and thus hold importance in their own way. Like in a class of 50 students, everyone needs to discuss with a teacher in the same place, so this makes it transparent easier to clear doubts. In this case, the WhatsApp Group is the best.

Whereas in a company, when there is a meeting proposed,  and it gets canceled. So to inform all the employees Broadcast will serve better so that no one will get to know the chats at the other end, as well as there will be no crowding of chats will take place. Moreover, when there is a privacy concern, Broadcasts should be preferred.

So from all the above discussion, we have arrived at the conclusion that both are good but in different places and none can replace the other one.

That’s all we have for the WhatsApp Group and Broadcast difference that is good in disguise. No one is better than the other, just they suite to different needs and uses. We hope you liked this and will be able to make proper decisions on which one to use. Until then, check out our Windows Guides, Gaming Guides, Social Media, iPhone Tricks, and Android Tricks for more guides. Subscribing to our YouTube Channel will help you win the $150 giveaway contest. If you have any doubts or feedback, comment down below with your name along with the e-mail ID, and we will reply shortly. Thank you.