In this guide, I have explained how to combine two images using the Shortcuts app on iPhone or iPad. Usually, for editing photos, we use fancy photo editors like Lightroom or Photoshop. They are full of features but they are not free to use. Everyone may not be able to afford to pay for such apps. Here I’m talking about non-pro users.  I know professional photographers and content creators are different from layman users. The former sect of users always invests in professional software and equipment.

On the other hand, if you have an iPhone or iPad, you can also edit images. Particularly, if you wish to combine two images on your Apple mobile devices, You don’t need to have any high-end editing app. Here, I’m not refering about the native image editing tools you get on iOS or iPadOS. You can use the Shortcuts app for merging two pictures. I have put up the detailed steps for you to follow about how to use a Shortcut to combine two images. Check it out.

How Does This Shortcut Will Work on iPhone/iPad

This works just the same way you integrate a plugin or browser extension on your PC web browser. The shortcuts tool is a native tool for automation. It adds various actions that you can carry out when you invoke the shortcut.

The shortcut that we will use in this guide goes by the name Combine images. As the name suggests, you can merge two images by defining the attributes like spacing, padding, and orientation. It is a third-party shortcut that is hosted on the official iCloud website of Apple. Mostly, these shortcuts are developed by enthusiasts and shared within the Apple community.

Here is the download link for the shortcut. It will take you to the official iCloud website.

Here I want to mention that you must allow untrusted Shortcuts on your iPhone/iPad. Otherwise, Shortcuts security settings won’t allow you to add the Combine Images shortcuts as it is not official. It happens because Apple never reviews the shortcuts that are not official. You will see a message like this. 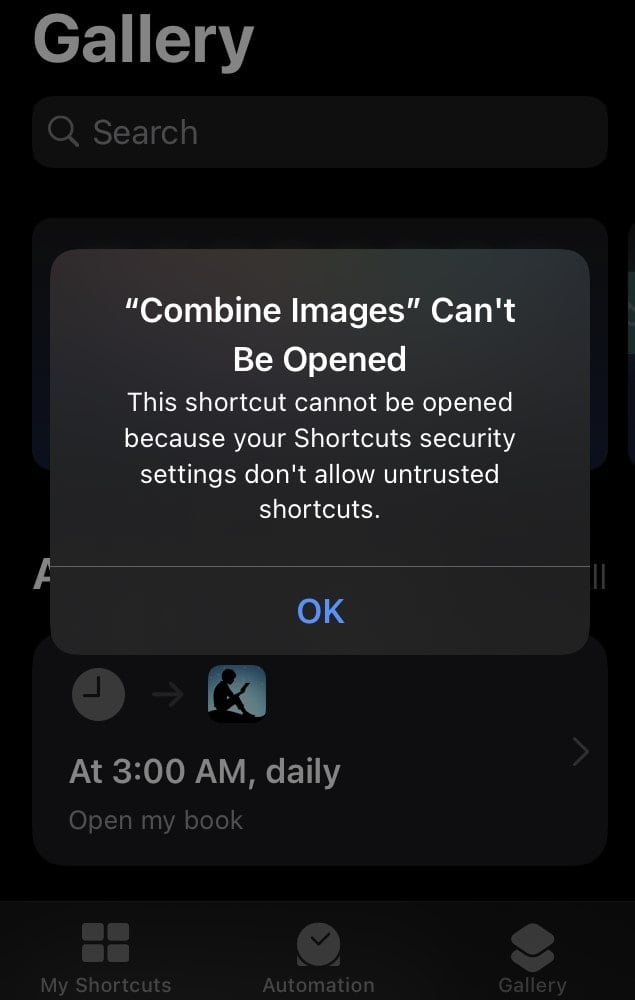 Here are the simple steps to enable using third-party shortcuts on your iOS and iPadOS devices.

Note that to enable untrusted shortcuts you must first run some pre-existing shortcut on your iPhone or iPad.

To access the combined image you can easily go to the Photos app and find the image. So, that’s how you can combine two images on iPhone or iPad using the Shortcuts app.