If you’re an Apple ecosystem user and interested in using macOS at home or office as a desk then Mac Studio is the right choice for you. Mac Studio is an entirely new Mac desktop in a smaller size with power-packed beast performance that offers a similar experience to Macbook Pro or more than that. As it’s compact and small enough to place on a desk, it has a separate fanbase. However, some reports are saying that Mac Studio not turning on unexpectedly.

Mac Studio packs an outrageous performance with a bunch of connectivity ports that can be called a mini PC. It’s capable enough to outperform most of the high-end PCs or laptops in a jiffy in processing power, multitasking, graphics-related tasks, etc. Though Apple devices are so powerful and well crafted to perform extremely, some users may experience boot up or display not showing issue which is frustrating. But there is nothing to worry about it.

Mac Studio Not Sleeping, How to Fix? 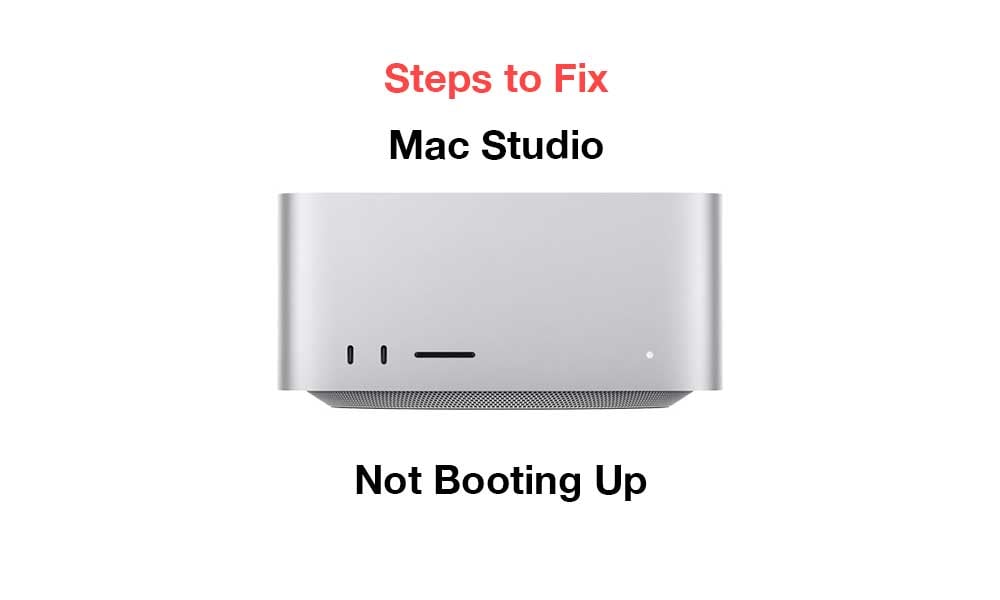 There are a couple of possible workarounds for you that should gonna come in handy. So, if you’re also facing the same issue, you can follow this guide to fix it. Maybe the temporary glitch or disconnection of the power adapter etc is troubling you. Now, without wasting any more time, let’s jump into it.

First, you should cross-check whether the Mac Studio is connected to the power source. If the power adapter isn’t connected to the source then the chances are high that it runs out of power. Ensure to connect your Mac Studio to the power source properly. You can also try switching out the adapter or power cable. Alternatively, you can use a different power outlet as well. Just wait for half an hour and then try booting up the system.

It’s also expected that maybe the mac Studio has some issues with the internal hardware for some reason. If the power port is physically damaged or the Mac Studio device has fallen on the surface then the hardware can be damaged. Additionally, you should check out the connectivity cables to the power and display monitor to ensure everything is running fine. Try unplugging the connected cables and then reconnecting them to check for the issue.

If in case, you’ve recently opened up your Mac Studio and tried something with its hardware then it may have caused the problem. Otherwise, if you’ve recently replaced a RAM stick or just re-inserted it or swapped out a hard drive then there may be a connectivity issue. Try reinserting the detachable components on the Mac Studio and try booting up it again.

You should also unplug all the external peripherals from the Mac Studio and try booting it up because temporary conflicts with the external devices may cause booting issues whatsoever.

We’ll also recommend you to perform a power cycle on your Mac Studio to refresh the temporary system glitch or not responding issue. To do so:

Make sure to check out the display monitor properly whether it’s connected to the Mac Studio or not. Sometimes the display monitor-related issue can lead to Mac not showing or booting up to the users even if it’s actually running in the background. Sometimes a low brightness level on the monitor may cause the same visibility issue even though the system is running. So, try increasing the screen brightness by pressing the F2 key on the connected keyboard.

Maybe the Mac is working fine but the sound is also low or mute apart from the display not showing up issues that can eventually bother you. So, try turning up the system audio to check if you can hear the beep or chime sound while booting it up (when you long-press the Power button). If the sound appears, your mac Studio and system are well. Just the monitor display has some issues.

5. Boot the Mac in Safe Mode

The chances are high that your Mac Studio isn’t booting up properly due to the corrupted or faulty macOS software that’s already installed. Additionally, corrupted or outdated cache data, corrupted startup items, etc can trigger such an issue. You can boot up your Mac Studio in Safe Mode by following the steps below. Safe Mode only loads the stock and necessary system files or programs apart from kernel extensions to boot up. To do so:

The SMC (System Management Controller) Firmware on the Mac Studio controls the display, LED, cooling fans, etc processes internally. So, you might need to reset the SMC firmware to its factory state to check if the problem has been fixed or not. To do that:

7. Use Disc Utility in Recovery Mode

If in case, your Mac Studio still refuses to boot up or it’s already booted up but not loading the screen properly then make sure to use the disc utility option in the Recovery Mode by following the steps below.

If the above methods didn’t come in handy for you then make sure to reinstall the macOS on your Mac Studio. You can follow the steps below to do so:

Some users did mention that reinstalling the system fixed their issue in most scenarios.

If none of the methods worked for you, try contacting Apple Support here to get technical assistance. If suggested, make sure to visit the nearest authorized Apple Store for further help.