In this guide, we will show you how to relock the bootloader on your OnePlus devices. This guide is valid for all the OnePlus variants, running any Android and OxygenOS version. For the unaware, Bootloader is a software program that instructs the underlying OS which all apps do it needs to load during the boot-up time. Furthermore, it also helps in booting your device to Fastboot or Bootloader mode (remember the adb reboot bootloader command?). There are literally tons of advantages associated with an unlocked bootloader.

How To Unlock Bootloader On Any OnePlus Smartphone

These include the ability to flash a custom recovery, most noticeably TWRP. And once we are in control of TWRP, there are a plethora of tweaks possible via it. For example, installing ZIP and IMG files, flashing the custom and GSI ROMs, among others all become a cakewalk if done via TWRP. Likewise, the ability to take a backup of all the device partitions (including data) in the form of Nandroid Backup is the icing on the cake. And if you aren’t satisfied with it, you could even flash the Magisk ZIP installer and obtain administrative rights. Well, there are tons of other modifications possible.

But since you are reading this guide, most of you might already be having an unlocked bootloader and would be aware of the associated perks as well. However, what many don’t seem to know is that with these goodies, comes some uninvited risks too. More often than not, owing to these risks, many users wish to revert on their bootloader unlocking decision. If you are having an OnePlus device and share similar thoughts as these users, then you have landed the right place. Today we will show you how to relock the bootloader on any OnePlus device. But first, let’s check out the need to do so. After that, we will list out the detailed instructions set. Follow along. 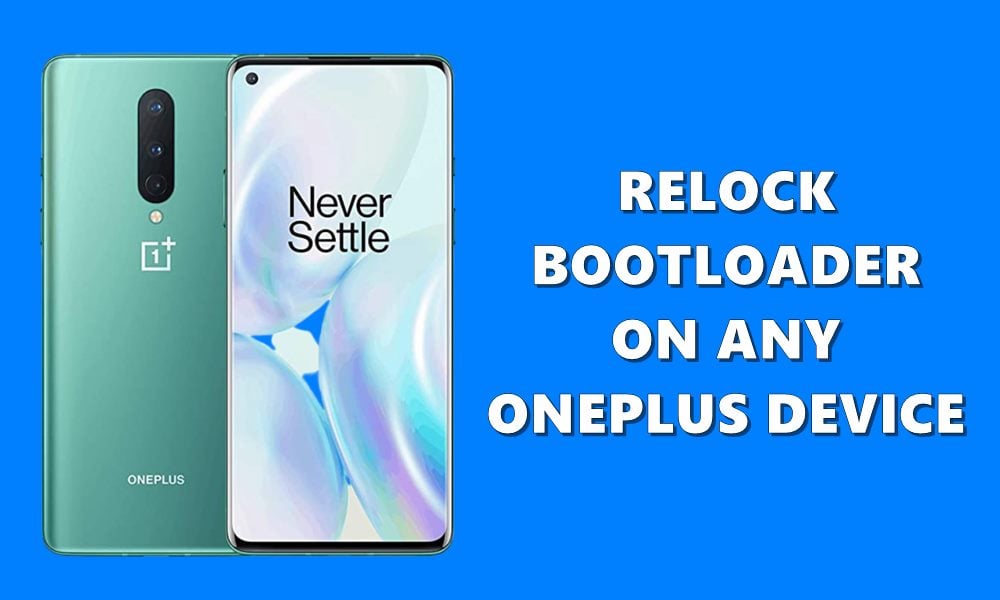 The Need for a Locked Bootloader

There’s no denying the fact that an unlocked bootloader lets you welcome many new modifications to your device. Some of you might already have tried them onto your device. But everything is not so good in the first place. There are always two sides to the coin, and the same is the case here as well. To begin with, as soon as you unlock the bootloader, you might have to bid adieu to your device’s warranty. Furthermore, all the data will be wiped as well. Adding to it is the fact that an unlocked device is always more prone to security attacks than a locked device. Likewise, many OEMs don’t allow you to install official OTAs. So you might be missing on new features and stability improvements.

Many apps also fail to work with an unlocked device. Google Pay and Pokemon Go are two famous apps in this domain. Similarly in apps like Netflix, you could no longer watch content in HD as you will lose the Widevine L1 Certificate and will be degraded to L3. Not to mention that there are always some associated risks in the form of the device getting bricked or in a bootloop. To counter all these issues, there is a simple solution at hand- to lock the bootloader of your device. And in this guide, we will be listing the instructions for just that. So without further ado let’s begin with the tutorial on how to relock the bootloader of any OnePlus device.

Relock the Bootloader on OnePlus devices

To begin with, there are some pretty important requirements that your device needs to qualify. Make sure to go through each of them before proceeding with the steps. Here they are:

That’s all from this section. You could now proceed with the instructions to relock the bootloader on your OnePlus device.

Steps to Relock Bootloader on OnePlus

So this was all from this guide on how to relock the bootloader on your OnePlus device. The first boot after carrying out this process might take a little bit more time, nothing to worry about. Similarly, once your device boots, you will have to sign in to your Google account to bring back the data (as the device would have been reset). On that note, if you have queries concerning the aforementioned steps, the comments section is all yours. Rounding off, here are some iPhone Tips and Tricks, PC tips and tricks, and Android Tips and Trick that you deserve your attention as well.