In this guide, we will show you the real image of the ISP pinout and test point for the Samsung Galaxy A21s SM-A217F. By using the ISP PinOUT, you can easily restore the stock ROM, bypass FRP lock, or reset user data on your device via UFi Box. In this guide, we will also guide you on how to reboot into 9008 EDL Mode. 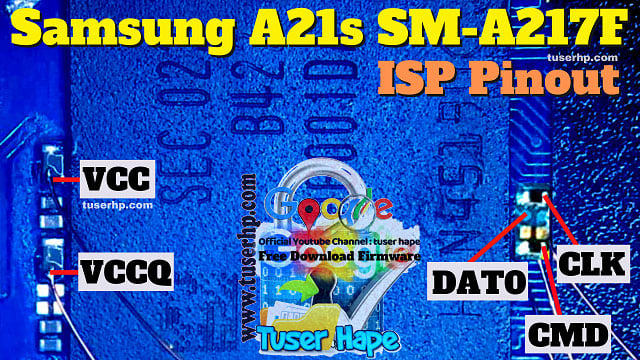 How to Use EDL Test Point using Easy JTag

I hope this guide was helpful to find the Samsung Galaxy A21s SM-A217F ISP Testpoints.

The Samsung Galaxy A21s has a 6.5-inch HD+ 720p resolution super AMOLED display with a punch-hole camera cut out which Samsung calls its infinity-o display. The phone has an aspect ratio of 20:9 and the screen-to-body ratio is around 83%. It has a pixel density of around 270 Pixels per inch (PPI). The phone weighs around 192 grams due to its big battery and its thickness is around 8.9mm.

The Quad-camera setup of the Galaxy A21s consists of a 48 MP main camera with PDAF, then there is an 8 MP ultrawide sensor, followed by a 2 MP macro and 2 MP depth sensor along with LED flash. It can record videos at 1080p @ 30fps. The phone has HDR and Panorama shooting options as well. At the front, there is a 13 MP selfie shooter in a punch-hole design, it can also record videos at 1080p @ 30 fps