Are you among those huge fans of the free-to-play battle royale games? If yes, then you can add Vampire The Masquerade: Bloodhunt as another name to your list. Publicly released back on 27th April 2022, the game has already created hype in the market with a massive fanbase. And players seem eager to book as many wins as they can at the early stage of the game. However, if are familiar with these types of games, you probably know how important it is to choose the perfect characters to score wins. Similarly, it is important to go for the appropriate archetypes in Vampire The Masquerade: Bloodhunt.

Unlike other battle royale games, it introduces the concept of clans and archetypes. In other words, you can think of clans as a class of a character and archetype certainly refers to a subclass. Therefore, to help you find a formidable archetype in Bloodhunt, based on your playstyle, we have come up with an archetype tier list ordered according to their classes.

Vampire The Masquerade Bloodhunt Black Screen on PS5, How to Fix?

Fix: Vampire The Masquerade Bloodhunt Crashing or Not Working on PS5 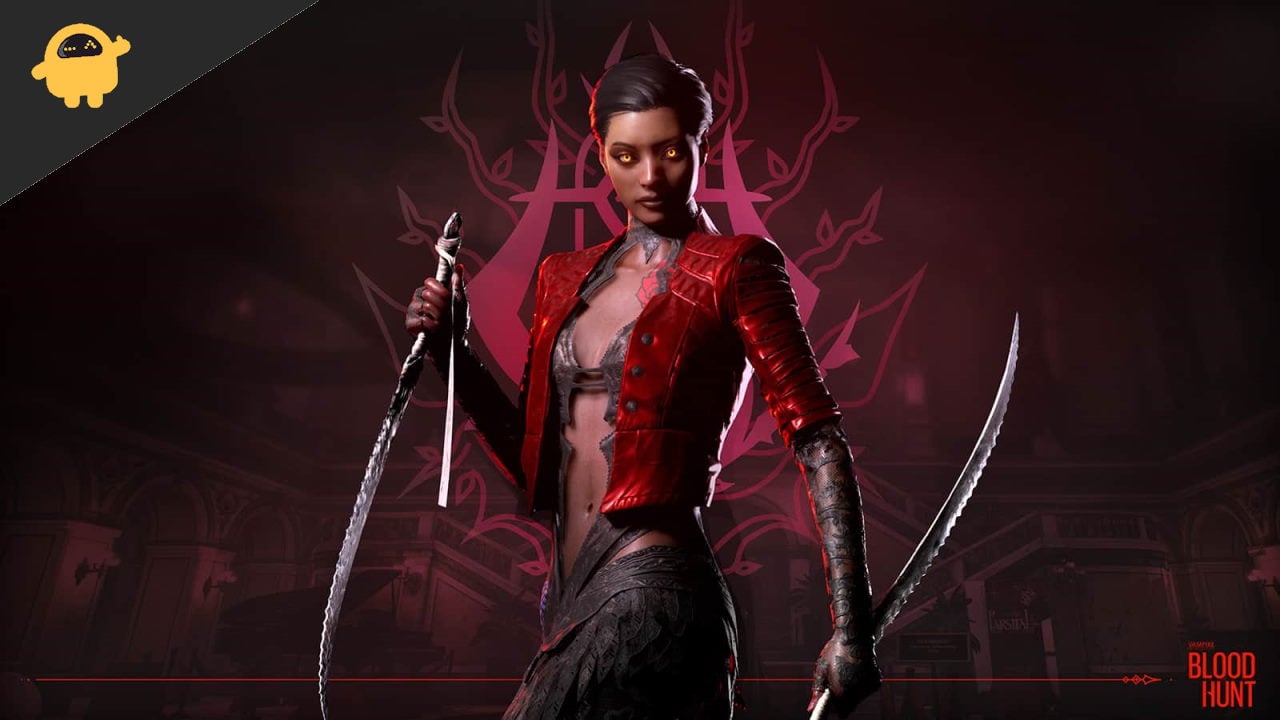 Archetypes in Vampire the Masquerade: Bloodhunt, is basically the subclasses of the characters. Each archetype possesses three distinct abilities, referred to as powers in the game. And this is exactly why it becomes a great concern to find the best archetype in Bloodhunt. Besides, all the archetypes within the same clan also share the same power with certainly higher abilities, known as the clan power. With that said, here is our archetype tier list from the best-ranked classes in Vampire The Masquerade: Bloodhunt. 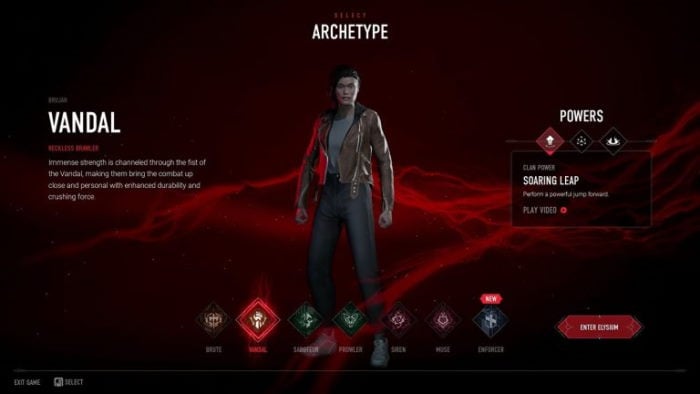 Coming from the S-tier class, Vandal is simply an exceptional character to have in Bloodhunt. Of course, as mentioned above, based on the type of playstyle you prefer, Vandal can be your first pick if you are more into melee attacks. Vandal comes from the Brujah clan and as such, he possesses their clan power Soaring Kill. Besides, Vandals archetype consists of his unique skill known as the Earth Shock ability. Both these abilities make Vandal unstoppable when it comes to scaling rooftops as they provide him with immense forward momentum.

Other than these, Vandal possesses another potential ability known as the Adrenaline Rush. Through this ability, Vandal can lend some fatally damaging attacks to its enemies in close proximity. On top of that, as long as this skill is active, it will let you know about all the nearby enemies through a large icon at the bottom of the screen. In a nutshell, it is simply one of the strongest characters enthralling some of the most indestructible powers in the game. 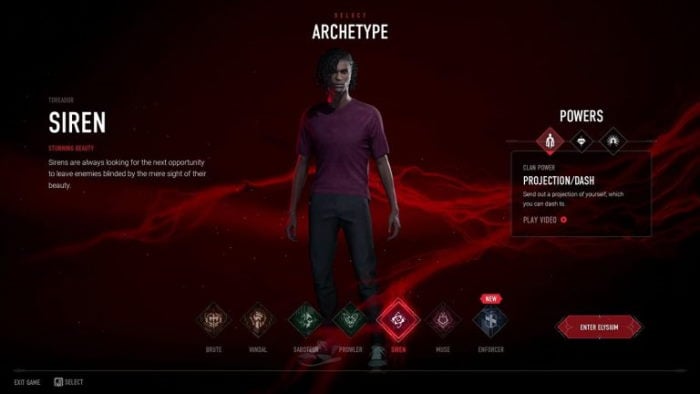 Siren is yet another melee character but certainly a well-balanced one. He undoubtedly possesses the best skill combo as a close to mid range character. Coming from the Toreador clan, Siren carries the Projection/ Dash skill from his clan. This provides you with the abilities of all kinds of movements along with the misdirection of the muse. His projection ability is simply an amazing mobility tool that will come in handy most of the time. Also, the blinding beauty ability lets you blind the enemies with range and provides some considerable damage as well.

Both these powers alone are enough for Siren to become a formidable character in the game. However, that is not all yet. His passive power known as Kindred Charm brings him more favors to him. It simply entrances all the nearby mortals in the game. In other words, this ability allows him to a particular blood resonance type while keeping you safe from becoming the target of a Bloodhunt on the go. This also helps in gathering some hefty bonuses in the early game as well. 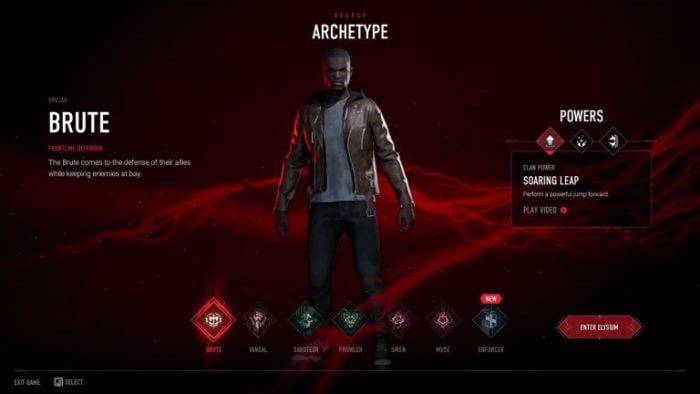 Coming from the same clan as Vandal, you can expect some impressive abilities from Brute as well. Although not as great as Vandal himself, instead Brute is specialized in a more defensive mid-range skillset. Ofcourse, its clan power Soaring Leaf already provides it with the best ability for fast roof traversal.

Besides, their archetype power i.e., the Shockwave Punch can turn the tables of any battle instantly. Their archetype skill basically masters in defending them as well as their teammates while getting into a melee range with your enemy. These abilities allows them to even surpass Vandal when it comes to squad matches providing that you use the abilities appropriately.

On the other hand, Brute’s usique skill ‘True Gift’ turns out to be a perfect combo with its clan and archetype skill. This passive power is basically a healing ability that helps them to acquire half-health just by staying a few seconds out of the battle. That way, you can stretch the battles for long enough while creating a dominance in the field. 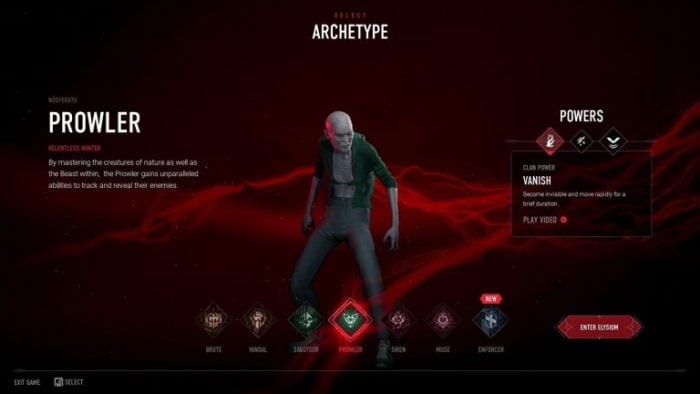 If you have a tendency to turn things to your side most of the time, Powler can be a great option indeed. This character is fun to begin with only if you can adapt with the hunting part in the game. Prowler comes from the Nosferatu clan that provides it with the clan power Vanish. No doubt, it is one of the interesting abilities you will see throughout the game as it lets you become invinsible for a small amount of time. In addition to that, you also gain some extra movement speed throughout that time period. But make sure to move quickly and in an unpredictable pattern as you can get shot even after being invisible.

Well, putting that aside, as a Nosferatu member, Prowler also possesses the Scouting Famulus archetype power. This ability basically allows you to send a group of bats to any area. By releasing pulses, they will scout the entire location while revealing the positions of the enemies as well. And finally, Prowlers unique ability, Sense the beast, allows you to track the movements of heavily injured enemies from the left out trials. So overall, Prowler looks an interesting character containing some mysterous and significant abilities. 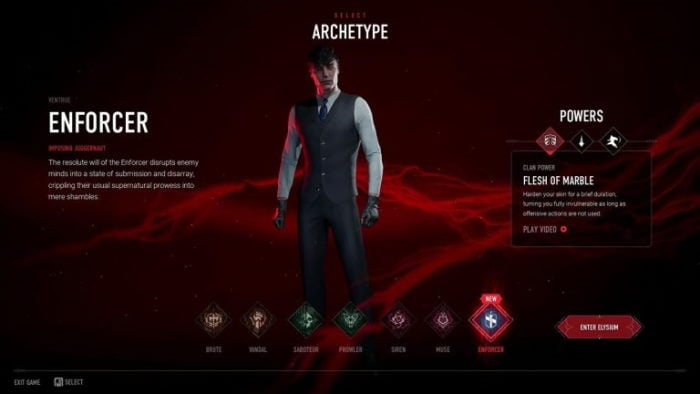 Although it seems Enforcer is quite lowly ranked on this tier list, well that is because, it cannot catch up to the other close-ranged ones from the Brujah clan. Even so, Enforcer has his own abilities that makes him a true all-rounder when it comes to going out on offensive style. As the first one from the Venture clan, Enforcer retains its clan power ‘Flesh of Marble’ that almost gaurantees invulnerability. This ability hardens your muscles enough for a considerable period of time providing you don’t us any offensive actions then.

Apart from that, its archetype power ‘Unyeilding Charge’ disables the monsterous power of the enemies. And adding more to that, Enforcer’s passive ability ‘Subjugating Presence’ slows down the speed of all nearby enemies by great numbers. If used properly, you sould be able to wash away all the enemies quite easily. However, compared to the Brujah members, going with Enforcer can be somewhat troublesome but an interesting journey indeed. 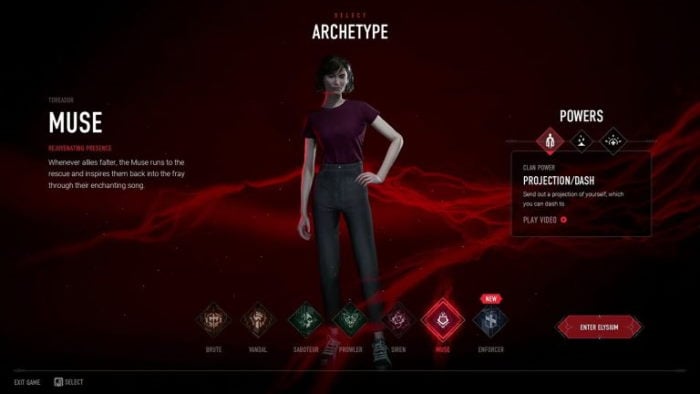 Muse, the second one from the Toreador clan possesses some amazing skills that might be useful on your way. Even though their powers do not compare to the S-tier or A-tier characters, they still possess enough skills to win the game or you. The only thing about them is you need to go through a lot to get that victory. Firstly, as a Toreador clan member, Muse also shares the Projection/ dash ability just like Siren. This time, you can use the same power to escape from the worse situations for a while and recharge yourself.

Muse’s archetype power i.e., Rejuvenating Voice is a cool healing power that can heal yourself and all your allies nearby. However, make sure to take no hits during this period as it will greatly effect the healing process too. Apart from that, Muse’s passive power ‘Final Act’ enables the use of your abilities even while downed. As a result, the combination of all the powers fits in perfectly to keep you going no matter how the situation looks. 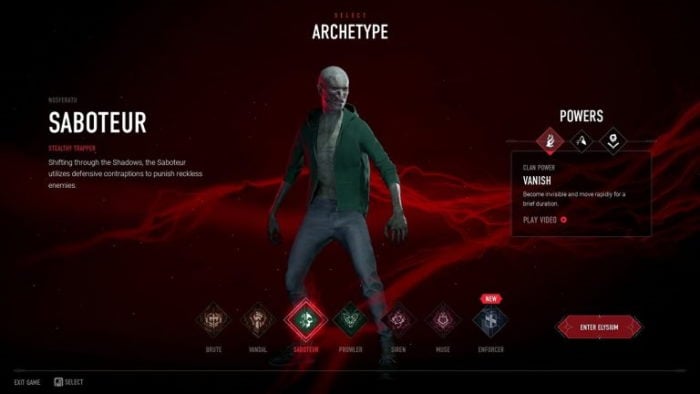 Coming to our final character and the second one from the Nosferatu clan as well. Saboteur unlike Prowler lacks the awareness, however, the are one of the skilled ones too. They basically belong to the trickster archetype and stealth and laying traps for enemies. Surely, Saboteur love to make use of its Clan power Vanish. Moreover, its passive skill is also quite similar too. The ‘Unseen Passage’ passive allows them to become semi-invinsible for a cartain amount of time.

Besides, Saboteur’s archetype power ‘Sewer bomb’ allows him to throw bombs that are basically proximity devices. It can be thrown to a great distance and instantly gets connected to the ground. Whenever an enemy enters within its range, these bombs explodes while releasing some poisonous gases offering considerable damage to the enemies. Although Saboteur seems like a better option for ranged attacks, it is quite tough to use the sewer bombs. As a result, Saboteur appears at the last on our tier list for the day.

One of the best things about Vampire the Masquerade: Bloodhunt is all its characters are very well calculated. It hardly features any character that is left out due to some unworthy powers. Instead, all the characters carry the potential to win victories. The only thing is, while some characters possesses fair powers to win an easier victory, some might take a while to get used to. Anyways, this was our Bloodhunt tier list that you can definitely refer to further in the game. Based on how you plan to carry on your journey, you can select one of the characters which you think would serve you well.