In this tutorial, we will show you the steps to create a character in Baldur’s Gate 3. While the game is still in the early access phase at the time of writing, the amount of eyeballs it has managed to grab is quite commendable. Consisting of both the single-player as well as cooperative multiplayer, this role-playing genre has plenty to offer. In this regard, one of the most talked-about features the ability to create your own character from scratch or choose from a preset one.

Most people decided to take the former route. This is because they could then mold their character as per their requirement, traits, and skills set that they need. On the other hand, a default character might not be able to tick mark all that you might want from him/her. So if you echo these thoughts as well, then this guide is here to help you out. Today, we will help you to create a character in Baldur’s Gate 3. Follow along. 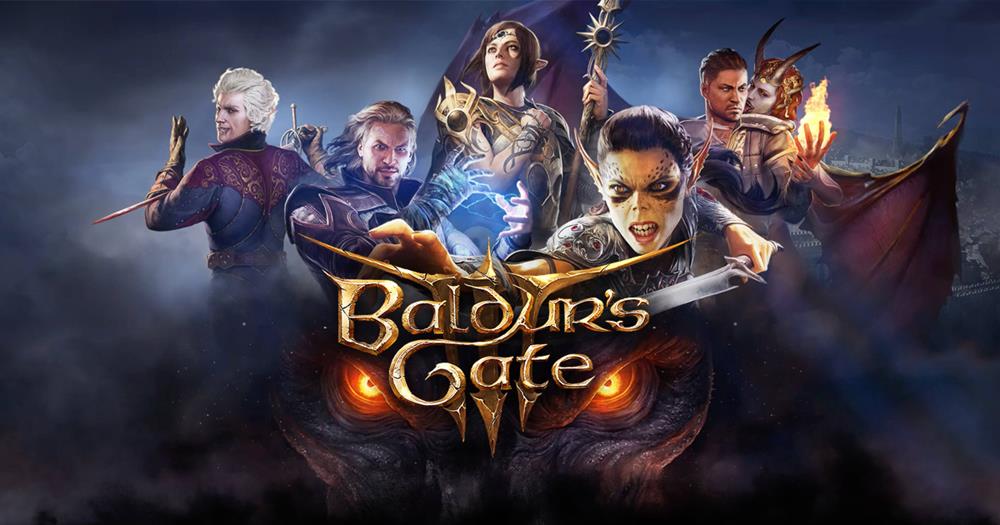 Baldur’s Gate 3: How to Create Character

Talking about character creation, there literally exists a plethora of customizations that you could get your hands on. Right from creating a race, subrace, gender to even the character’s detailed appearances including voice, face, skin color, eye color, tattoos, the possibilities stand endless.

Along the same lines, you could select from six different classes, their skillset, and attributes, including skills, intelligence, charisma, among others. So if all these intrigues you and you are also looking to create an entirely new character in Baldur’s Gate 3, then this guide will come in handy. Follow along for the complete instructions. 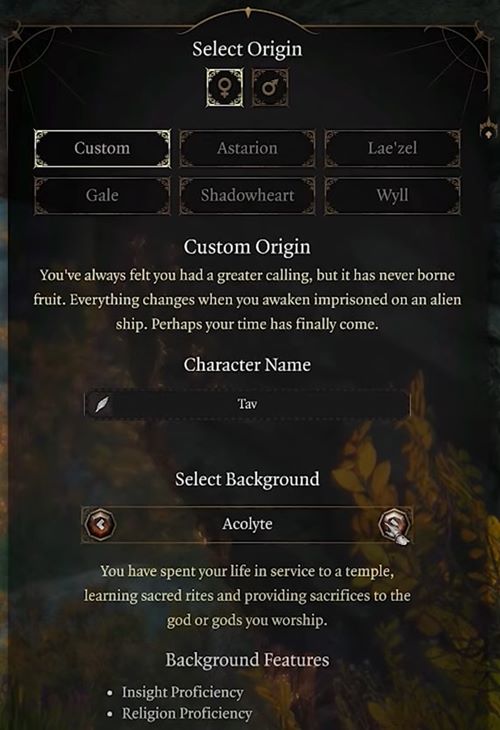 As soon as you head over to the character creation screen, there will be two options- either select from the preset ones or click on Custom and create your own. Since we are creating a new character, let’s get on with the Custom option.

When you are about to create a new character in Baldur’s Gate 3, you also have to select a background. In that regard, the game has 13 backgrounds to offer. Here’s the complete list of all of them and their associated skills set as well.

Next up, you will have to select the Race of your character. There exists a total of eight races that you could choose from. Likewise, each of them consists of additional subraces as well. For example, Elf Race consists of High Elf and Wood Elf; Half-Elf has Wood Half-Elf and Drow Half-Elf, Tiefling has Zariel Tefling, Mephistopheles Tiefling, and Drow consists of Seldarine Drow and Lolth of Sworn Drow. 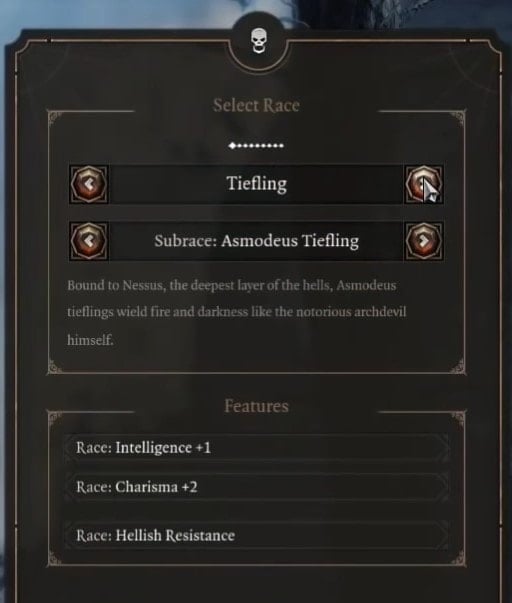 Human has a race bonus of 1 point to all the attributes. Likewise, Githyanki consists of 1 Intelligence, 2 Strength racial bonus. Dwarf Race has Gold Dwarf, Shield Dwarf subraces whereas Halfling consists of Lightfoot Halfling, Strongheart Halfling. Once you have selected the desired race and subrace, its time to move onto the next section of this guide to create a new character in Baldur’s Gate 3.

In this, you could select the character’s voice, skin color, eyes color, facial color among others. Here is everything you need to know in this regard. 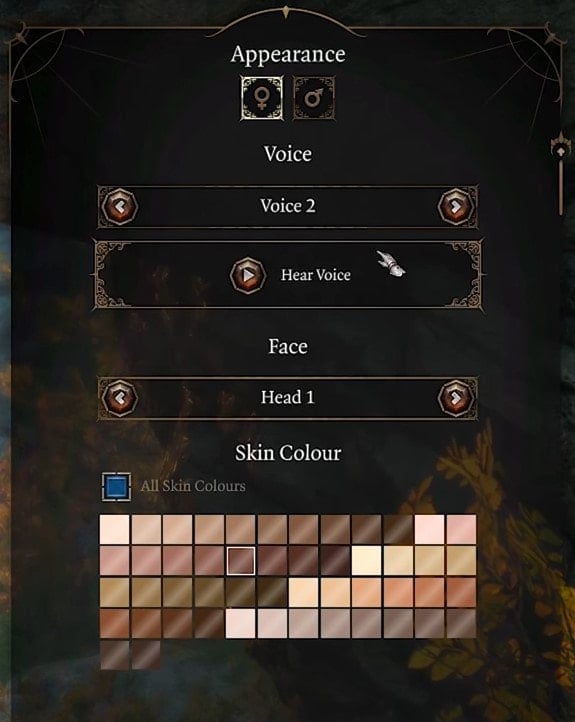 The next step in our guide to create a new character in Baldur’s Gate 3 calls for selecting a class, subclass, and their associated skill set. In this regard, the game has the following six classes to offer: Cleric, Fighter, Ranger, Warlock Wizards, and Rouge. Cleric has Life Domain, Light Domain, and Trickery Domain as its subclasses. Rouge comes with a powerful back attack and possesses decent bow skills as well.

Fighter- who could use a variety of weapons and armors, Ranger- Along with being an expert is using a bow, they could even ascertain the type of their opponent as well as select an additional trait. Then you have the Warlock with The Fiend and The Great Old One as its subclasses and Wizards- who are a master in spells and magics. Once you have done the selection, its time to shift our attention towards the skillsets. 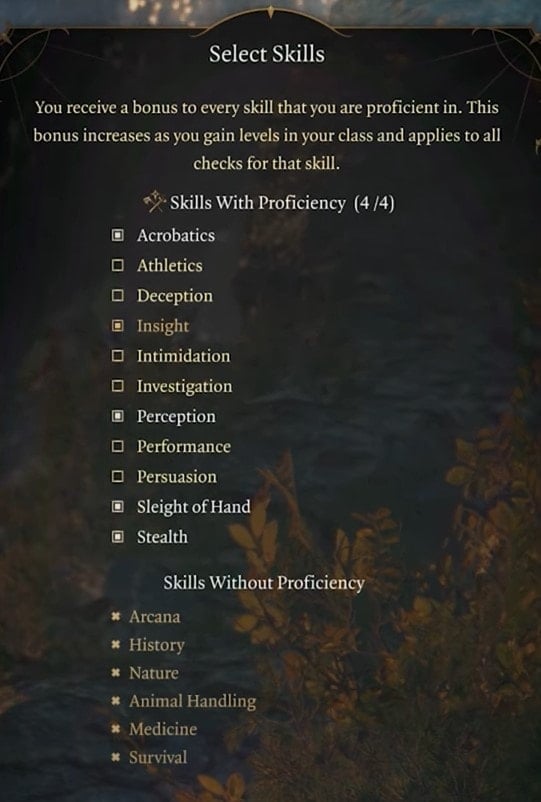 In this section to create a new character in Baldur’s Gate 3, you have to select the right skills. Depending on the race of your character, there will be two different sections: Skills with proficiency and Skills without proficiency. Likewise, you will be receiving a bonus for every skill in which you are proficient and expert.

Next up in our guide to create a new character in Baldur’s Gate 3, you will have to assign the ability points in such a manner that is best suited for your character’s skillset. For example, if you have selected a Ranger class, then you should assign more points to Dexterity. This will directly improve his skills in using the ranged weapons. Talking about which you could select from the following six attributes: 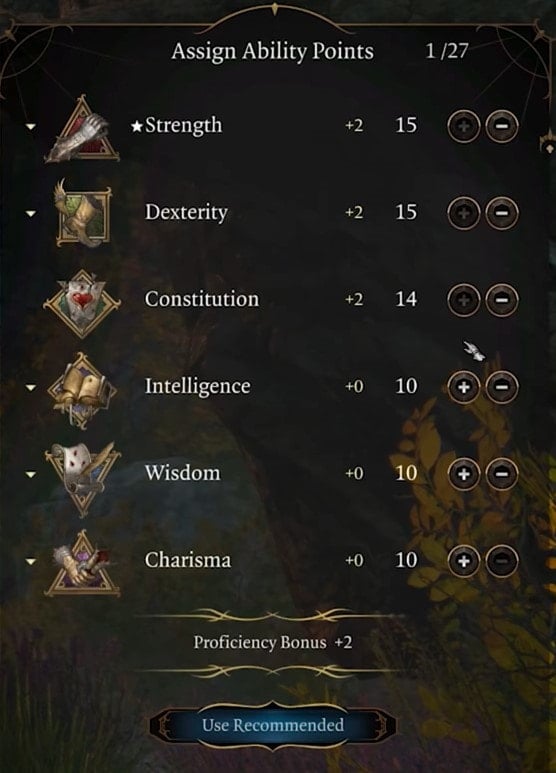 Selecting the Origin and Name

Consider this is an overview screen. It will show you all the traits and skills that you have selected in the earlier steps. If you wish to tweaks any of these settings, it’s better you do it right from this screen itself. All these options will be on the left of your screen. On the right, there will an option to name your character and select their background. 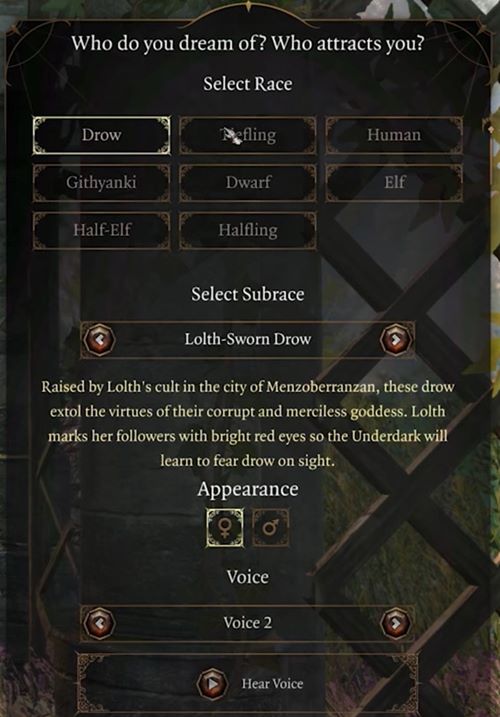 The last section requires you to create your Dream Character in Baldur’s Gate 3, someone to whom your character might get attracted to. In this regard, you could select the race, gender, subrace, voice, skin color, eye color, hairstyle, stubble, tattoos, and makeup for your character’s love interest. Once that is done, hit the Venture Forth button and embark on your journey.

So this was all from this guide on how to create a new character in Baldur’s Gate 3. Do let us know your selections based on the aforementioned traits and skill set, in the comments section below. Rounding off, here are some iPhone Tips and Tricks, PC tips and tricks, and Android Tips and Trick that you should check out as well.