Giants Software did release Farming Simulator 22 as one of the latest generation agricultural farming simulation video games in November 2021 for Windows, Xbox One, Xbox Series S|X, PlayStation 4, Mac platforms. As the title suggests, this game allows players to harvest crops, tend to animals, manage productions, etc. Though the game is really good for PC, some players are facing the Farming Simulator 22 Could Not Init 3D System Error.

According to the players, whenever they try to launch the Farming Simulator 22 video game on the Windows PC, they’re getting the particular “Could not init 3D system, Shader Model 6.0 is required. Please install the latest video drivers. Download latest GPU driver now?” It seems that even Mac users are also facing the same error message which is really frustrating. This error is happening due to the DirectX-related issue or an outdated graphics driver.

Fix: Farming Simulator 22 Could Not Connect to Server Error 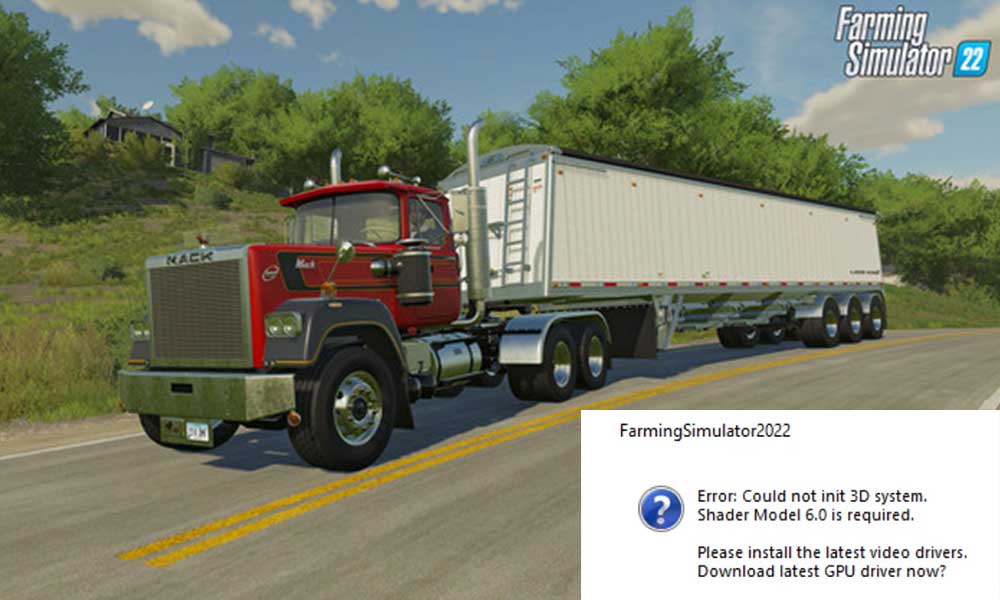 Here in this troubleshooting guide, we’ll be sharing with you a couple of possible workarounds that should gonna help you out. So, without wasting any more time, let’s jump into it.

1. Use Another DirectX Version

However, if there is no display driver update available on the PC then make sure to manually download and install the latest graphics driver on the computer according to the manufacturer and model number below:

Coming to the Mac users, if the “Could not init 3D system” error appears while trying to launch Farming Simulator 22 that means your MacBook’s graphics card or the macOS version couldn’t load the Metal 3D rendering engine which is required. So, there are a couple of possible workarounds to try fixing it out.

It’s a better idea to directly download Farming Simulator 22 via Giants E-Store to check whether the game is running well or not. The Giants store version of the game comes as a native app using Metal.

If in case, you’ve purchased Farming Simulator 22 via Steam then you can run a special script to force run the correct architecture. To do this:

Note: The Steam and Epic Games versions may sometimes cause several glitches or other issues. It seems that the devs forgot to package the app bundle correctly, though Steam already added native support for M1 with Steamworks SDK 1.52 version.

We should also mention that the older MacBook models and macOS versions may not support the Metal 3D rendering engine. So, you’ll have to check if your Mac supports the new Metal shader version 6 or not.