Disclaimer: Although these troubleshooting methods are tested to have a positive effect, uprooting Google Chrome crashing issue on Windows 11 (and previous iterations), user discretion is required as some of the methods may involve technical stuff that a normal user won’t try unless recommended. 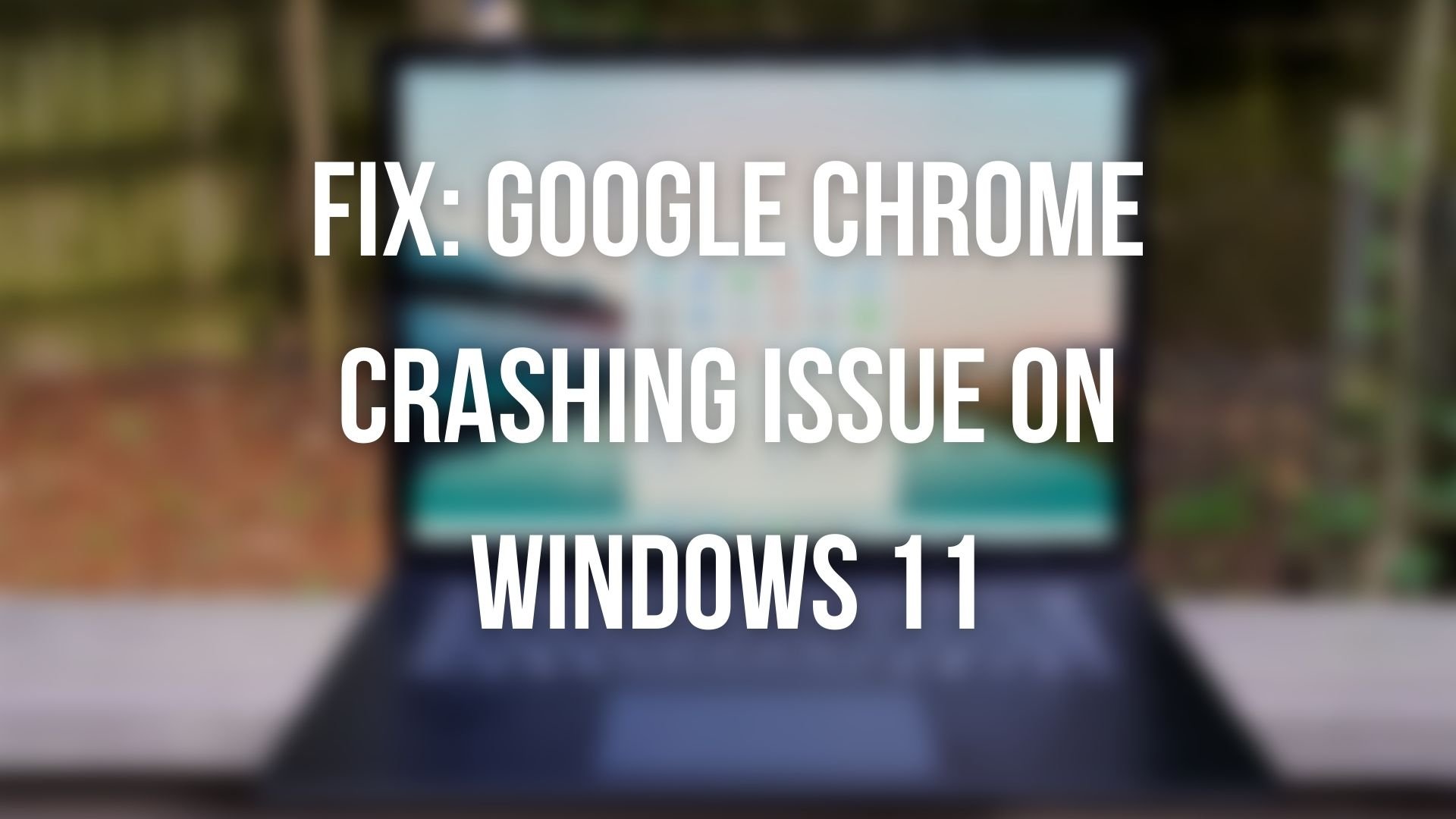 Google Chrome crashing issue on Windows 11. What to do? Before going for the big guns, there are some obvious troubleshooting methods you can use. Since it has crashed, it’s time to close Google Chrome using the “Close” menu on the top-left corner. The browser has crashed and it is unresponsive you say. Well, in that case, try closing the browser using the right-click on Google Chrome icon on the taskbar and select “Close All Windows” from the pop-up menu.

This should close the app right away. Of course, you can easily close a frozen software using the “Task Manager” that you can call via the “CTRL+ALT+DEL” buttons on the keyboard and turn tapping on the “Google Chrome” under processes and select “End Task”. 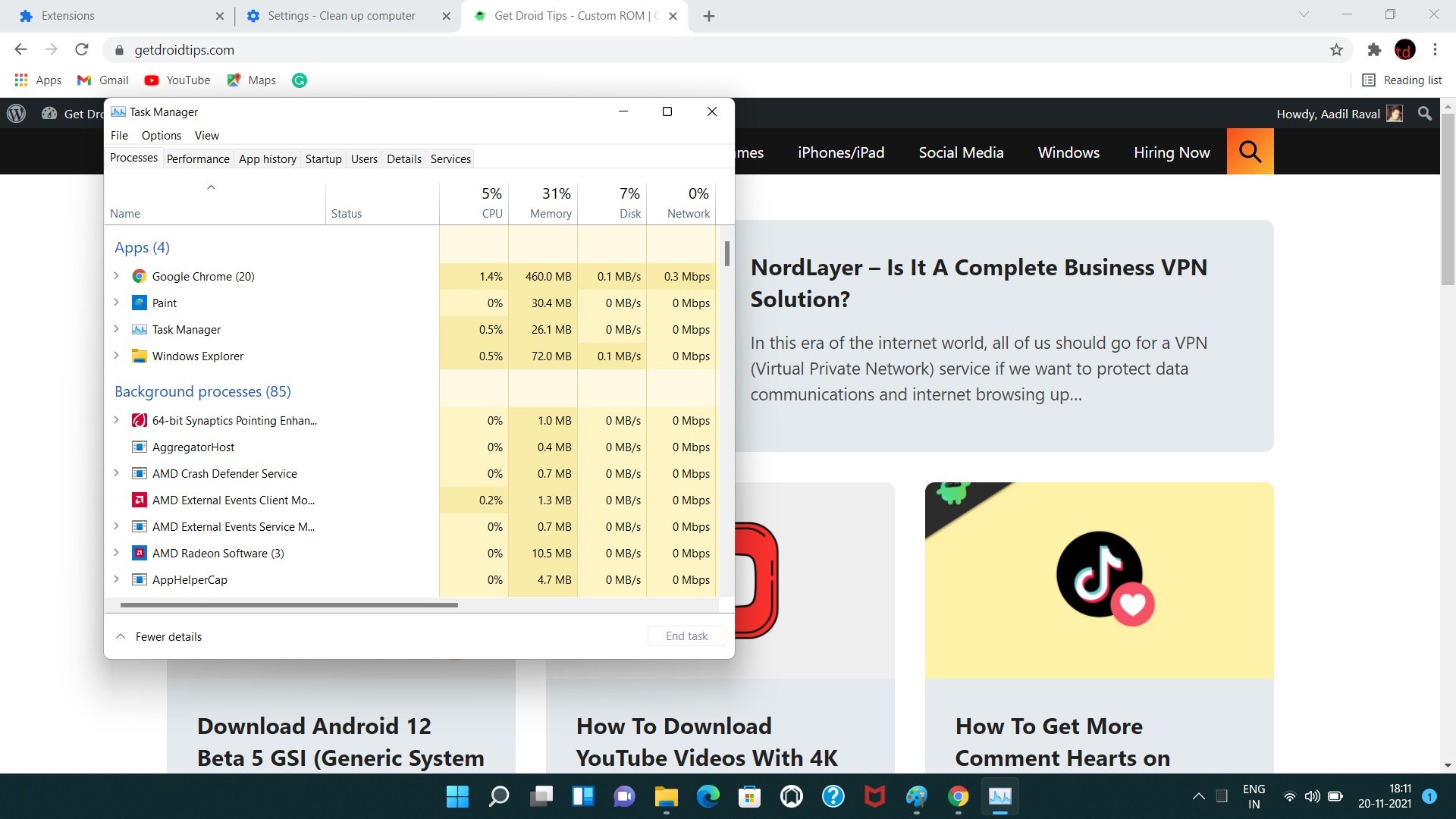 You already closed the Google Chrome browser using task manager so why another method dedicated to it? Well, this one is a bit different.

When you close a window on Google Chrome, it should close itself, isn’t it? Turns out sometimes a window may seem closed but it still runs in the background which is what caused RAM issues. Now multiply the same with ‘n’ number of windows you closed and which didn’t close in the background and you get what’s wrong here.

Summoning the task manager gives you access to all the windows open on your system as well as those in the background. You can either close windows one by one or all at once. Note that there’s no distinction between windows so you won’t be able to tell which window has what website opened on it so you will have to play safe here.

How to Fix Runtime Error in Windows 11

You can literally open 100s of tabs on Google Chrome as long as you have sufficient RAM at your disposal. Since usually, users have 4GB or 8GB systems (or even less), RAM management on Google Chrome is a bit iffy. This means there will be a certain number of tabs you can open before it begins to behave abnormally. Also, the processes that you are running on the opened tabs can dictate the number of tabs to open before Chrome crashes as well.

This is a trick that works for any issue on any device out there. Simply turn off your PC, let it catch a breath for a few seconds, and restart it. This should fix any impending software glitches that were causing Google Chrome to crash. Proceed further if this doesn’t work out. 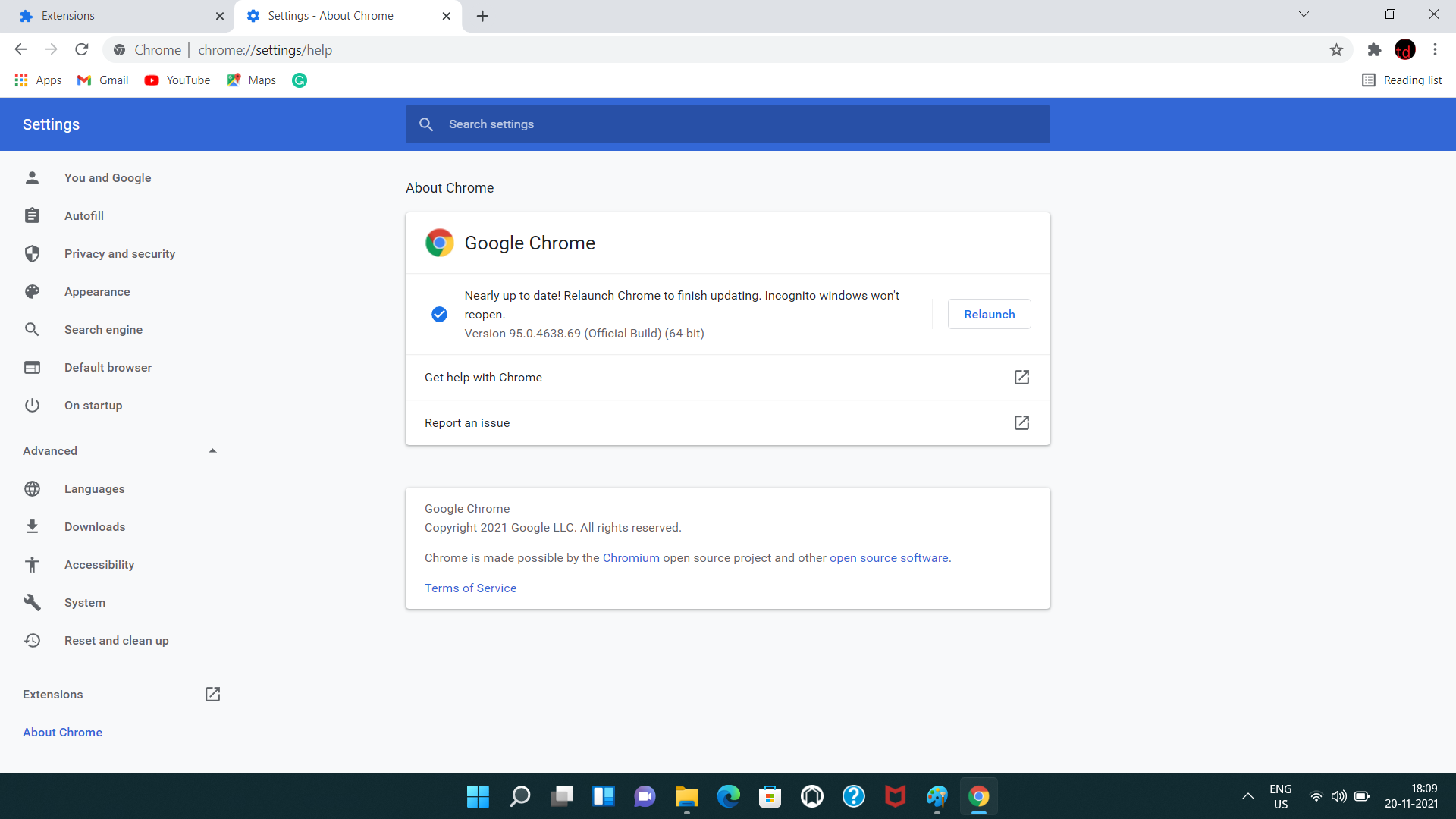 Check if Chrome is upgraded to the latest version or not. You can do so by going towards Google Chrome >> click on three vertically stacked menu >> Help >> About Chrome and you should get the necessary details on the latest Chrome version and if you have received an update or not. If yes, download and install the update and you are good to go. 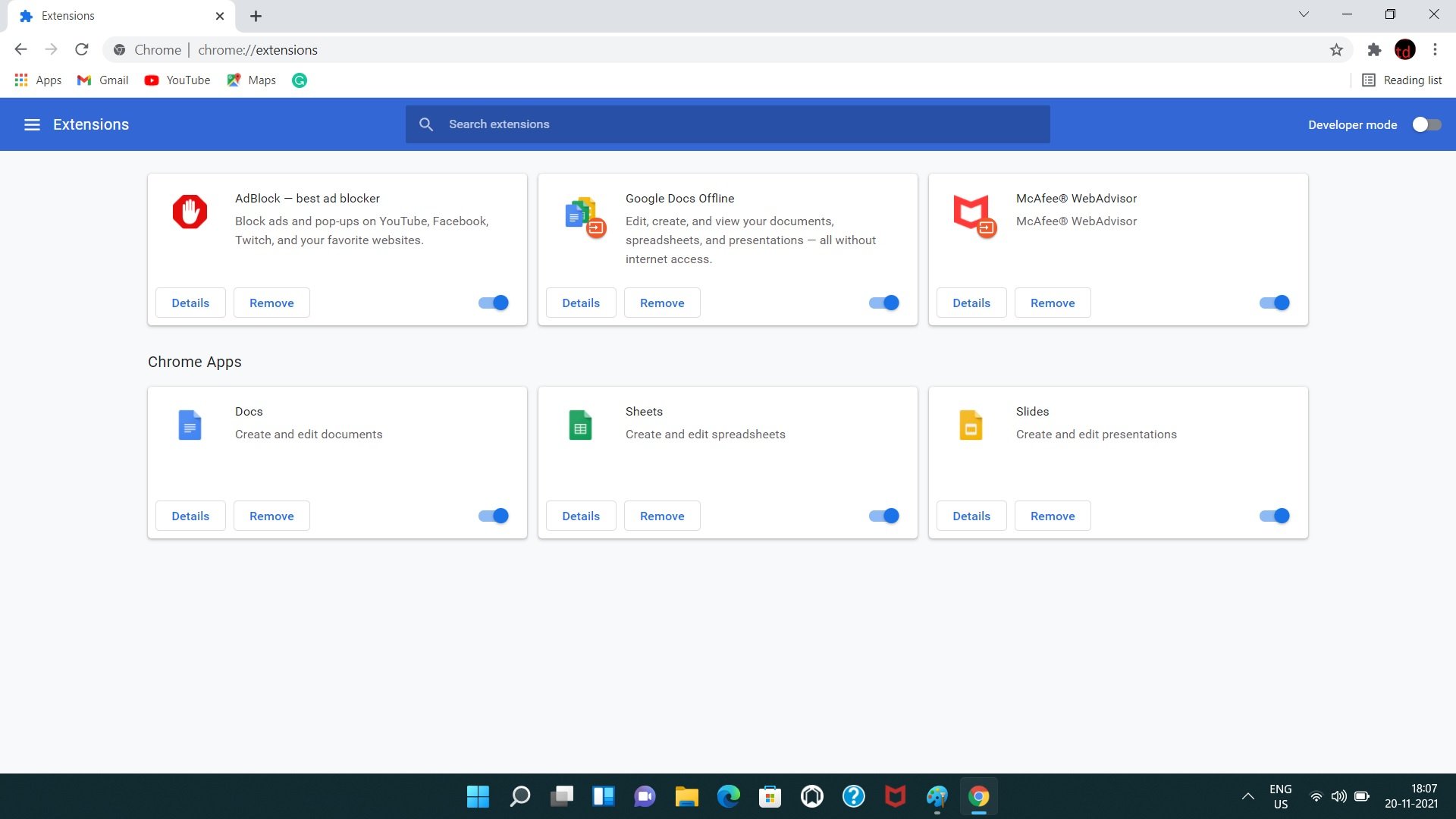 I used a lot of extensions on Google Chrome such as the PiP mode for YouTube, AdBlocker, and so on. One of the reasons why Google Chrome on your Windows 11 PC would behave abnormally is because of a faulty or malicious extension. You can close all the extensions at once if you don’t use or require any or use this technique to zero in the one that’s causing the abnormal behavior.
Step 01: First, open Google Chrome on your PC.
Step 02: Go to Extensions under More Tools.
Step 03: Turn off all the extensions. You can “Remove” extensions that you no longer use.
Step 04: Turn extensions one by one and check which extension is causing the browser to stutter.
Step 05: Remove the said extension and hopefully, everything will be sorted hereafter. 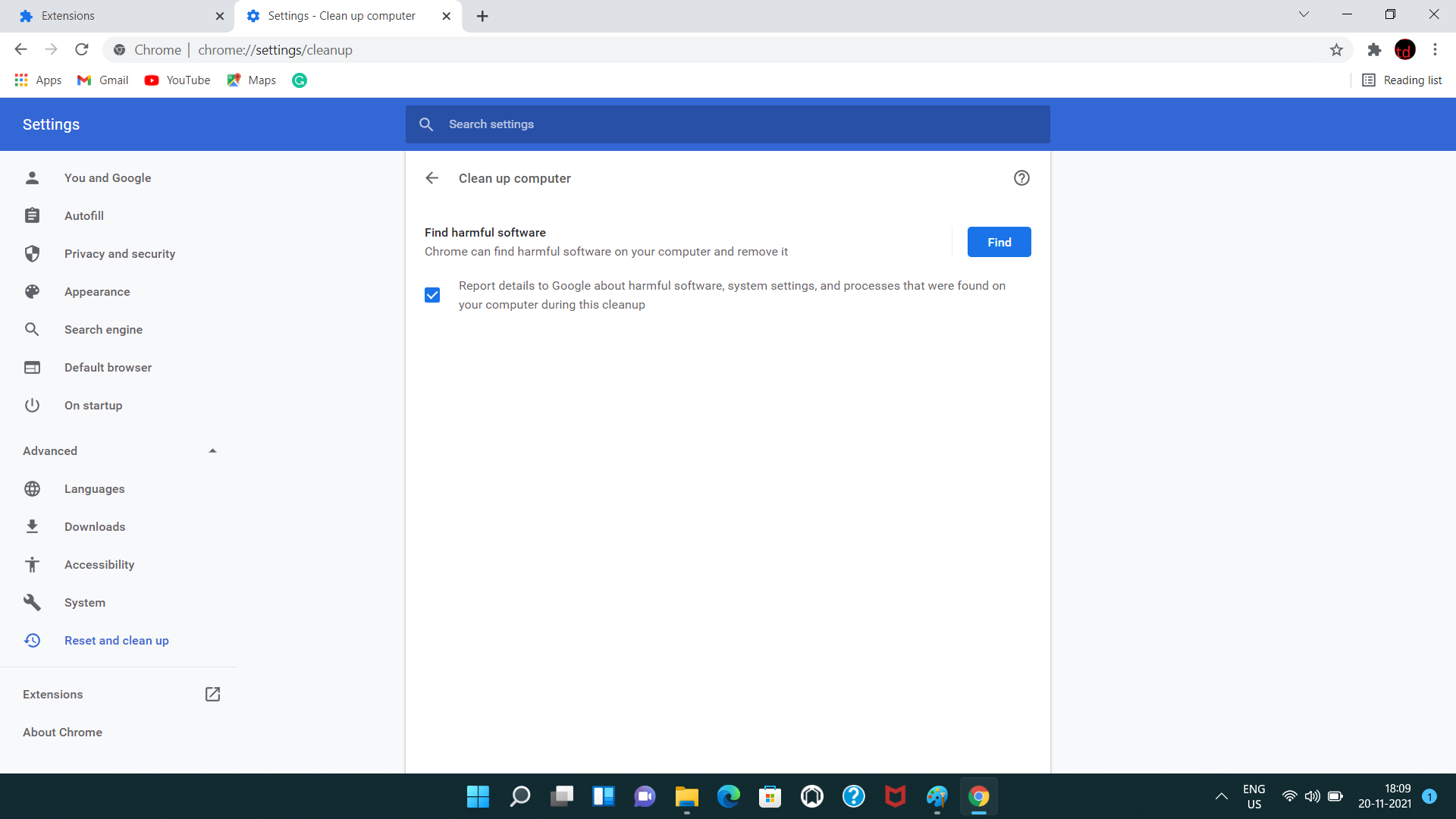 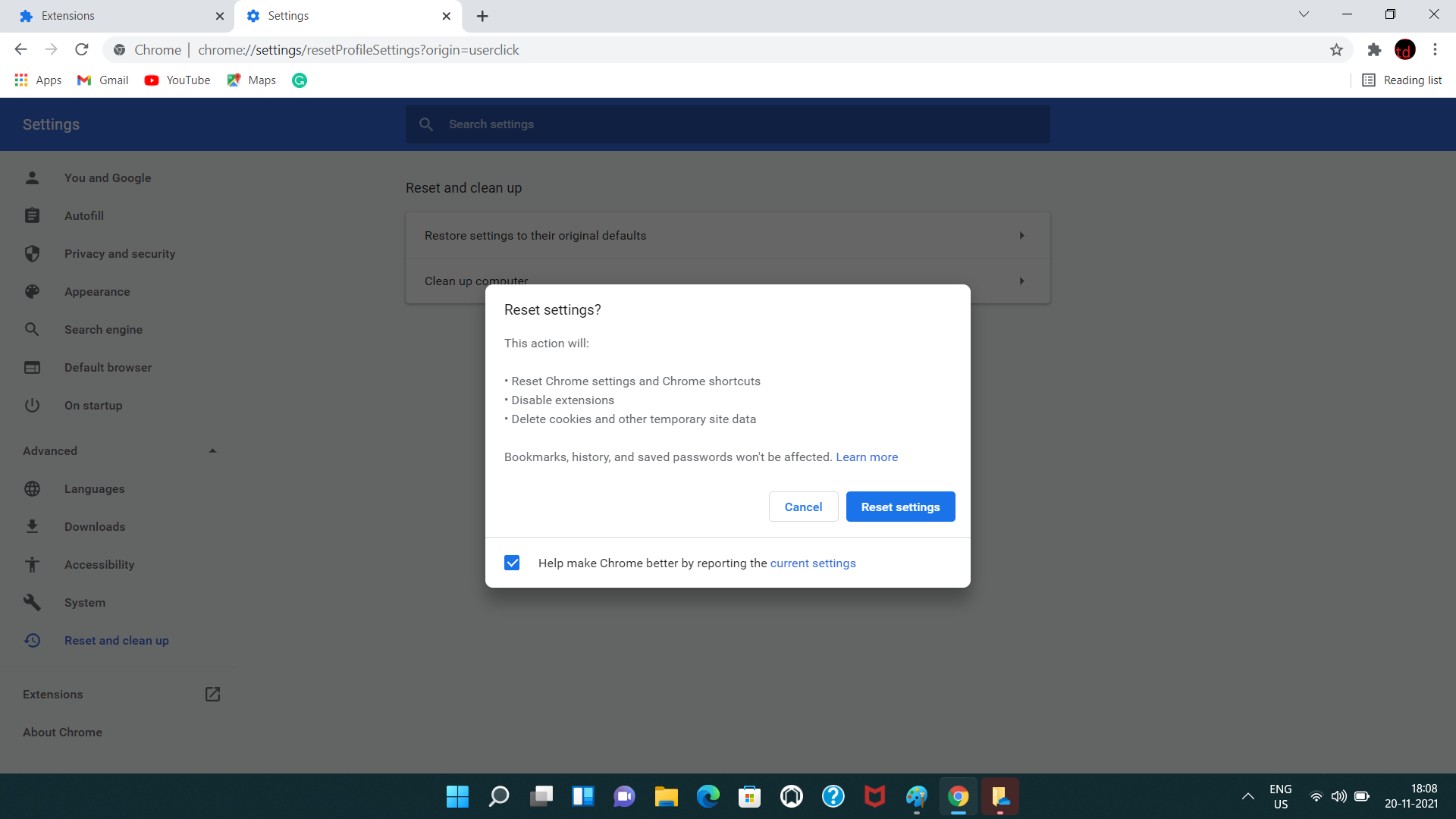 If you can’t find what’s wrong with the browser, maybe you (or someone else) tweaked some settings causing it to behave abnormally. You can simply go to Settings >> Reset and Clean Up and select “Restore settings to their original defaults”.

I have a knick to clear temporary files every time my PC starts slowing down or some software crashes. You can clear “prefetch”, “temp”, and “%temp%” via Windows Run (Windows + R) function. Empty the recycle bin as well.

You can load an app, website, or service load faster whenever you are using it. Turns out these cache files may rack up on size and if you don’t get rid of cache files or it doesn’t delete itself, you could have issues with the particular app. Google Chrome is notorious for crashing due to cache files and the never-ending RAM management issues. Here’s how you can clear it.

No matter how you do it but you still end up with a Google Chrome crashing issue and it is annoying, to be honest. This is probably what you can do before moving into a different browser (yes you should move out if Chrome is too problematic). You need to reinstall the browser on your PC. For that, you will have to uninstall it first.

Use Microsoft Edge as alternative

If you haven’t used Microsoft Edge on Windows 11, it is almost similar to Google Chrome minus the exorbitant RAM management issues that the latter is suffering from for ages. Microsoft Edge is agile, lightweight, and lets you do everything you would do on Chrome. Of course, adjusting to it will take some time but it is much better than adjusting to the constant crashing, freezing, and unresponsive nature of Google Chrome.