This guide will show you how to flash stock firmware on your Samsung device using Odin software. Samsung devices are among the biggest player in the smartphone industry. Based on Google’s Android OS, there are a plethora of tweaks that you could try out. While Samsung’s own UI is itself no short of customization opportunities, yet if you use Android’s open-source nature, the possibilities increase exponentially.

We aren’t just talking about downloading numerous icon packs or custom launchers. Well, you could install an an-altogether new ROM on your device. That’s not it. You could also replace your stock recovery with TWRP or gain administrative privileges in the root form. However, while all these definitely add a few features to your device, it comes with an associated risk or two.

Bootloop or a bricked device are two of the most common ones.  In that case, flashing the stock firmware is all that is needed. To do so, Samsung has released a separate Odin tool (also known as Odin Downloader or Odin Flash Tool). Along the same lines, you could also flash the latest software update on your Samsung device manually.

However, unlike other flash tools, this one wasn’t released for the general users. It’s used by the Samsung developers to flash or install stock firmware on any of their devices and most probably got leaked over the internet. Anyways, the tool is used to flash stock firmware on Samsung devices, granted that the firmware is in .tar or .tar.md5 format. On that note, here are all the required instructions and the installation steps. Follow along. If you wish to roll back to the stock Samsung firmware, you can make use of the Frija tool to download the firmware. 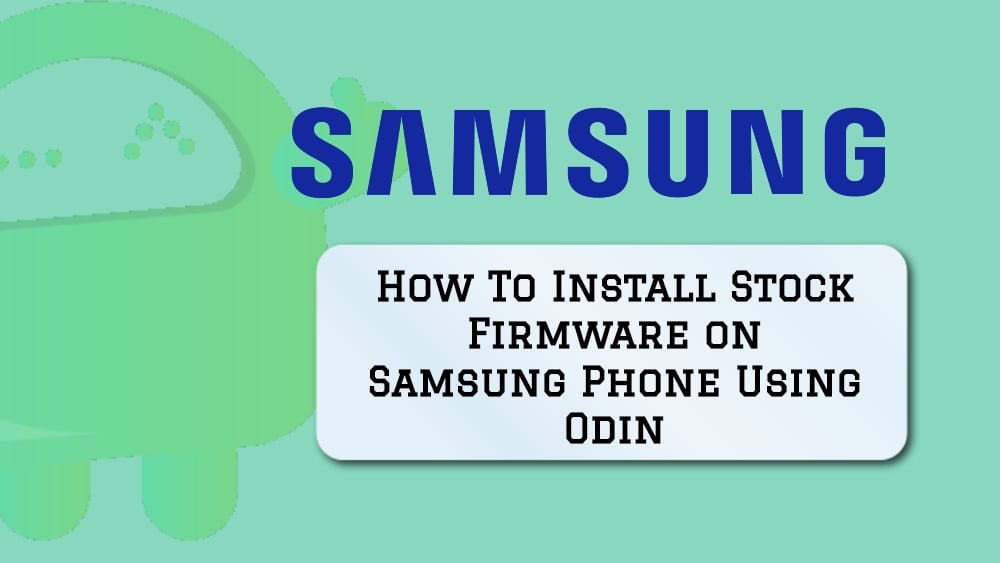 What is a Stock Firmware

Stock Firmware is the official ROM that the manufacture ships into your device. Although it is still based on Android, yet it is further optimized by the respective OEMs. They tend to add new features, customize the existing ones, or make some changes as they deemed fit. More often than not, all the devices from a particular smartphone manufacturer have near-identical customized Android OS. For example, in the case of Samsung, all the devices, whether they are the entry-level device or its flagship, ship with the latest OneUI operating system.

Although the offering and features will definitely vary, yet the underlying UI and stock options will be the same. Earlier, Samsung shipped their devices with Samsung Experience UX followed by TouchWiz. Now it comes with OneUI for Android 9 devices and OneUI 2.0 for devices running on Android 10. With that said, let’s check out the advantages of the stock firmware. After that, you will show you how to install stock firmware on your Samsung device via Odin.

Also Read: CSC and Home_CSC | All You Need to Know About ODIN Samsung Flash

Not everyone wishes to tweak their device’s OS, yet owing to the massive custom development support, this user base is constantly on the rise. As a result, users just have to meet one requirement, that is an unlocked bootloader, and then there a plenitude of things to try out. Installing custom ROMs is among the top of the priority list. But by doing so, they are inviting some associated risks as well. Some users do end up bricking their devices. In that case, there is a handy escape route available.  You could just flash the stock firmware and bring it back to working condition.

Apart from that, not all custom ROMs are stable and free of bugs. In fact, one can hardly deny the fact that even though these custom ROMs offer many more features than stock firmware, yet they can never match the stability of the stock firmware. Furthermore, since they are officially released by your device manufacturer, there stands complete surety from the safety point of view. Furthermore, if there are any bugs, they will release a new update pretty quicky and patch that issue on the go. So all these might have given you a rough idea as to the importance of the stock firmware. On that note, let’s check out how to install stock firmware on your Samsung devices using Odin.

How To Install Stock Firmware on Samsung Phone Using Odin

Below is the list of issues that you might come across while installing the Samsung firmware using the Odin tool. You can quickly troubleshoot the issue by following the solution mentioned below:

So, there you have it from my side in this post. I hope you guys liked this post and were able to install stock firmware using Odin on your Samsung phone. Let us know in the comments below if you come across any issues while following the above-mentioned steps. Until the next post…Cheers!