There is nothing wrong to say that Gamers in the present scenario have a ton of reason to cheers. This is not just due to the fact that games are becoming more and more superior but it’s due to another reason also. The fact is many manufacturers are becoming with best and in fact dedicated hardware to enable gamers to keep up the pace in every aspect. Of course, hardware matters a lot when it comes to building a gaming PC that works without any interrupt. Among all the hardware for a gaming PC, the daunting task is to choose the graphics cards especially one has a limited budget. Well, this post introduces you to some of the best gaming graphics card under Rs 12000 so that you can get the best you need. 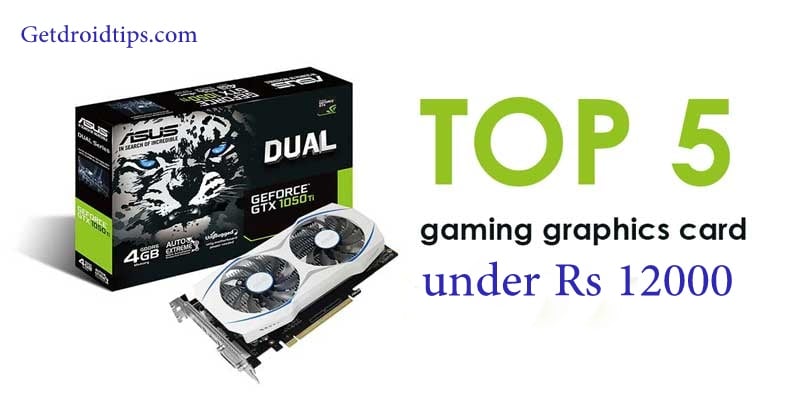 It is quite true that many manufacturers are available in the market and everyone claims to offer the best. However, it is not always necessary and thus one should pay close attention to while choosing the best available options for the graphics cards for a gaming computer. The fact is its nothing but a graphics card that always adds something extra in the gaming experience. To get the best that you can have, here are some best options on gaming graphics card under Rs 12000.

Low profile design with a slot and card length of 150 mm saves more space to fit a slim or smaller system. Equipped with a DVI-D and an HDMI port, the card supports up to 4K of high resolution.

Equipped with a DVI-D and an HDMI port, the card can offer beautiful and smooth 4K video playback.

The utility of the intuitive AORUS graphics engine

The intuitive cutting interface allows you to tune the clock speeds, voltage, fan performance and power target in real time according to your own gaming requirements.

With a simple click on the AORUS Graphics Engine utility, players can easily tune the card to meet their different game requirements without any knowledge of overclocking

The GTX 750Ti, a graphics card with great specifications in a price to performance ratio.

With 2GB GDDR5 and a frequency of 5.4 GHz coupled with GPU GM-107 at 1111 MHz that although it seems to be written in binary, it makes the most of your favourite games in Full HD resolutions.

The Maxwell technology installed in the GTX 750 Ti is the most advanced in the world in terms of GPU architecture. The reduction of consumption of these cards allows a higher computational power maintaining or even reducing consumption, thus enabling this Gigabyte to offer hyper-realistic graphics while maintaining noise levels and consumption of previous generations.

Next to Maxwell comes Windforce. United get that the consumption, noise and temperature of your GTX 750 Ti are so low that you will think that you do not have it on. Windforce increases the flow of air to the heatsink of your graph, scratching a few degrees of temperature that will keep it at almost negligible noise levels.

This Gigabyte is compatible with DirectX 12 and Open GL 4.4. In addition, it includes DVI-D and HDMI connections.

ASUS graphics cards are produced using Auto-Extreme technology, a 100% automated production process in the industry and Premium Super Alloy Power II components that improve efficiency, reduce the loss of power, decrease the hum of the components under load and reduce the thermal temperatures for a quality without equal And reliability.

Gigabyte AMD R7 360 GV-R736OC-2GD is the latest generation GPU with Factory Overclock and 2GB of GDDR5 video memory capable of running the latest games in Full HD and support for AMD’s exclusive technologies.

Gigabyte AMD R7 360 use AMD Eyefinity technology supports multiple video outputs, offers and enables workspaces in massive desktop resolutions and ultra-immersive visual environments for a gaming experience and panoramic work. Eyefinity configurations allow you to play with 3-screen configurations from intermediate models such as the AMD R7 360 and above, also allowing this support to operate without the need of a monitor with a DisplayPort port or an adapter for this port; up to 4 monitors if you have the monitor that supports DisplayPort.

One of the most common problems for PC players is the so-called tearing that consists of breaks and jumps in the horizontal lines of the screen which obviously ruins the immersion experience of a game for those who present this situation. The problem is that both the monitor and the video card rarely synchronize perfectly because while the monitor maintains a rate of 60Hz (or 120Hz) the video card has high or low depending on the content.

Adaptive-Sync technology allows the FreeSync, AMD technology, to control the refresh rates of the screen through the GPU, avoiding tearing when you rotate 3D models or video content.

We hope our Buying Guide on Best Gaming Graphics Card under Rs 12000 helped you choose the best product according to your needs,