Sony recently announced a revision under the Xperia series, Sony Xperia 1 III, 10 III, or Xperia 5 III smartphones. Sony Xperia 1 III is designed as a flagship phone, while Sony Xperia 10 III and Xperia 5 III are midrange phones. These all smartphones are available for sale in the summer of 2021. Besides all, the upcoming Xperia phones have an IP rating that sounds a bit relaxing as the Xperia 1 III has an IP68 rating, and Xperia 10 III and 5 III have an IP65/68 rating as justified by the price. To check further details of IP ratings, we conduct a waterproof test of these newly launched smartphones.

Sony has mainly known for its camera performance. Sony introduces a first of its kind with a variable focal length of 70mm and 105mm by a single sensor with the zoom of 2.9x to 4.4x zoom. Hence, it also provides identical camera features in the Xperia 1 III and 5 III that includes three 12 MP camera with PDAF and OIS as it covering the wide, ultrawide, and telephoto range. The Xperia 10 III also has a triple set up camera of 12MP primary camera with two 8MP with wide-angle 75-degree field view. Although we will test these models one by one for a water test and get to know if Sony Xperia 1 III, 10 III, or Xperia 5 III Waterproof Smartphone? 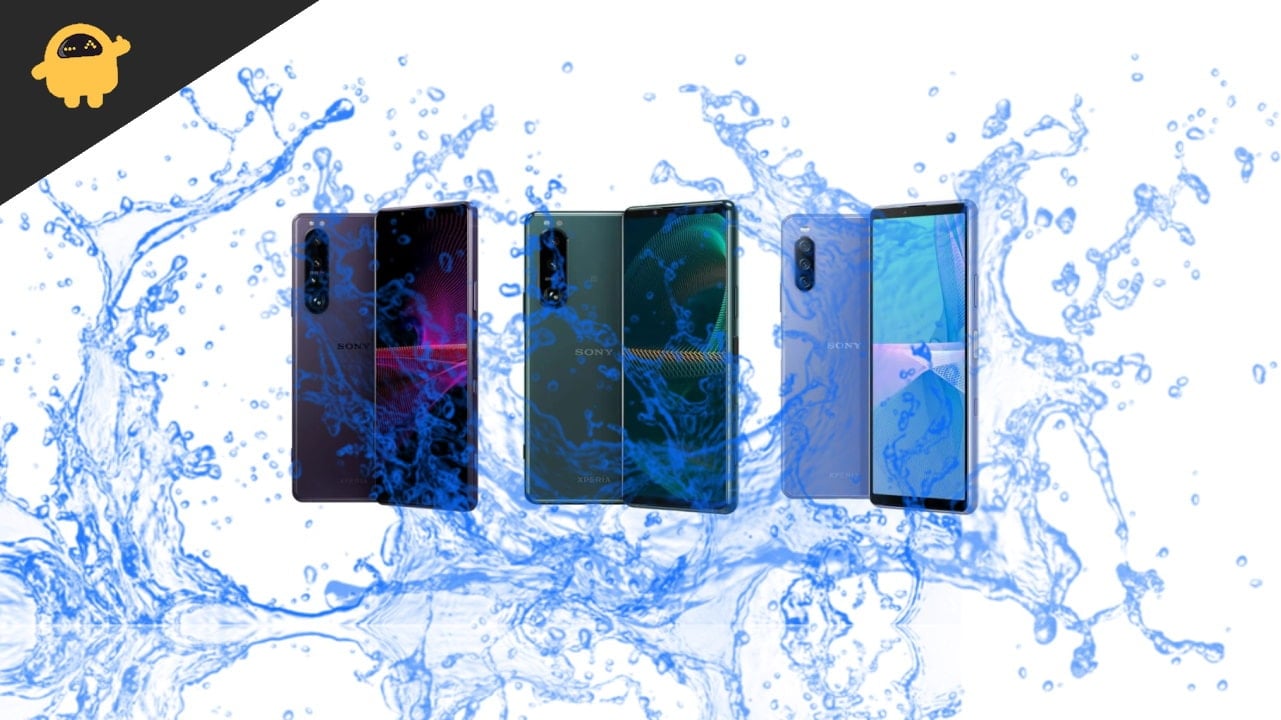 As we know, IP ratings stand Ingress Protection that provides a rating that the device is waterproof, splashproof, or water-resistant. However, if the brand offers any IP rating, you can rectify any water issue on your device within the warranty period in the brands’ service centre.

Talking about the Sony Xperia 1 III specification, it has a 6.5-inch OLED display that supports 4K resolution with a refresh rate of 120hz. It also has a side-mounted fingerprint scanner. It comes with Snapdragon 888 chipset, with 5G connectivity and up to 12 GB of RAM and 256 GB of internal storage, and it is expandable up to 1TB. The battery capacity of the Xperia 1 III is 4500 mAh, which supports 30watt fast charging.

A triple camera setup will be available on its back panel, in which three 12-megapixel sensors will be available. In these, one primary, second ultra-wide, and third periscope lens have been given. Although, the periscope lens unit comes with dual focal lengths, in which you can choose between 70mm and 105mm focal lengths for optical zoom. However, this type of feature has been launched for the first time in the mobile industry. Also, it has an 8-megapixel camera front camera that also has a wide-angle feature. Xperia 1 III is rated with IP 68 that is dust and waterproof.

Hence, the above water test clearly mentions that the Sony Xperia 1 III is a waterproof phone. You can use this device in water as it is rated IP65/68 but dry the USB ports before charging the device as it may contain water in it and cause a hazard.

The Sony Xperia 10 III comes with a 6.0-inch OLED HDR display, which has a resolution of 1080 x 2520 pixels. The aspect ratio of this phone with a refresh rate of 120Hz is 21: 9. Snapdragon 690 chipset has been given as processor in this phone with 6 GB RAM and 128 GB internal storage. To provide power to the phone, it has a 4500mAh battery, which supports 18W fast charging. Also, the phone has a triple rear camera setup with an LED flash.

It has an 8-megapixel ultra-wide-angle lens with a 12-megapixel primary camera and an 8-megapixel telephoto sensor with an 8-megapixel camera in this phone for a selfie. With the phone’s rear camera, you can shoot 4K video and full HD video at 30fps. Battery The Sony Xperia 10 III is powered by a non-removable Li-Ion 4500 mAh battery. It comes with IP65/68 rating, water, and dust-resistant phone covered with Corning Gorilla Glass 6 for protection.

No issue occurs during and after the test. Although after the water test, we conclude that Sony Xperia 10 III is a waterproof smartphone with an IP65/68 rating that survives the detailed water test. We recommend that you can use it underwater but need to take care of the guidelines provide by Sony.

In addition, Sony Xperia 5 III also has a rating of IP68 that means it is also water/dust resistant. While making sure your device is not repaired by you or the service centre otherwise, you can easily use this device on the beach or swimming pool with no issues.

Overall, The new Xperia 1 III, 10 III, or Xperia 5 III all have IP 65/68 ratings that allow users to use the device freely anywhere. Moreover, with all the new and latest features and processors, it will impact the smartphone market. As shown above, Xperia 1 III, 10III, and 5 III have an official IP 68 rating, so you don’t have to worry about these devices while near water bodies.