Motorola recently launched its two new smartphones in the “ONE” series, the Motorola one Fusion and one Fusion Plus. Both of these smartphones are considered budget smartphones, but the Plus model comes with more features and prices. 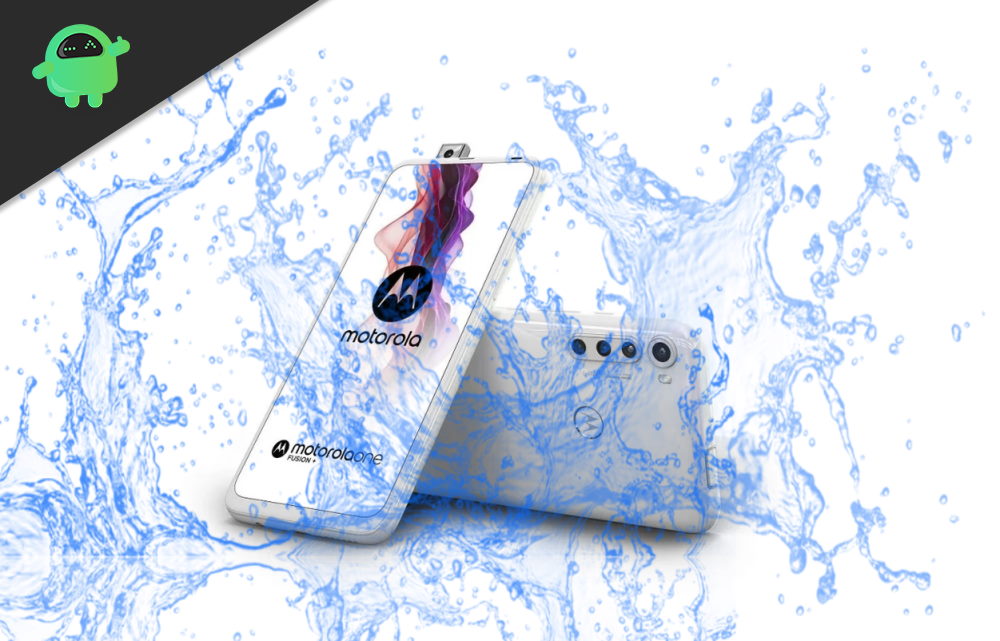 Motorola is an American based smartphone company that mainly sells low budget range devices as well as some high-level flagships. They are mainly known for making some of the best Android devices in recent years.

Moto smartphones are also known very much for their hardware, as the build quality of Motorola devices is great, their Aluminum bodies, and much much more. However, Motorola provides a Waterproof feature in most of its devices. But waterproof and dustproof capabilities mainly come in the flagship category or in some higher range devices. In their lower range or mid-range devices, they usually do not give this feature.

If we talk about Motorola’s One Fusion and One Fusion Plus, then officially, they are not a certified waterproof and dustproof device. This certification is given on the basis of the IP ratings which the smartphone gets during its official test.

But believing in the build quality of Motorola’s devices, we will conduct Motorola One Fusion and One Fusion Plus waterproof and dustproof test of these devices and let you know the results.

Motorola One Fusion Plus Device Specifications

Motorola Fusion Plus comes with a 6.5 inches IPS LCD display, which comes with a pixel density of 396 PPI. This device runs on Android 10 with Snapdragon 730G chipset.

The device houses a quad-camera setup at the back with a 64-megapixel primary camera, 8-megapixel wide-angle camera, 5-megapixel macro camera, and a 2-megapixel depth sensor.

The front camera is a pop-up selfie camera, and it is one of the few devices to have it at that price range. This smartphone only has a single storage variant, the 6 GB, and 128 GB ram and storage, respectively. You can also use its dedicated sd card slot to increase its storage up to 256 GB.

Motorola One Fusion Plus Waterproof and Dustproof Test

The Motorola One Fusion Plus does not come with an official IP rating. Although, we can not consider it as a Waterproof or Dustproof device.

But it does have a water-repellent nano-coating that can give you some basic splashproof feature. However, we will do a test on this device to check how this device can withstand our waterproof and dustproof test.

After dipping the device in water for more than a minute, we have found that this device is a splash-proof device.

It can easily work fine with some splashes, and can even work in mild rain. The device can also work in with some of the dust, but you have to clean it timely to net make it damage.

Motorola One Fusion comes with a 6.5 inch HD Display. It will have a quadcore processor with Snapdragon 710 chipset. This will also have a single storage variant, the 4GB ram and 64GB internal.

The battery of One Fusion smartphone is a 5000 mah, which is currently not having a fast charging feature. Motorola one Fusion also has a quadcore camera setup at the back with a 48-megapixel primary camera, 8-megapixel wide-angle camera, 5 megapixels macro lens, and a 2-megapixel bokeh effect camera. The front camera of this device is an 8 megapixel with a waterdrop notch.

This device does also not have a certified waterproof and Dustproof IP rating. But it may be a splashproof device with some dust resistant functionality.

So, we will do a waterproof test on this device to check whether it is waterproof and dustproof or not.

This was the result of the test from this device. We can conclude that this device can handle some of the splashes and can be a splash-resistant smartphone. But it can also damage if you give it water exposure for a long time and can damage speaker and I/O ports.

After conducting a waterproof and dustproof test in both of these devices, we can say that if your primary goal is to get a waterproof resistant device. Then these devices would not be a better option for you.

There are devices available that have an IP certification for waterproof and dustproof technology. But overall, these both devices are great according to their features and can also work great with some splashes and exposure of water with them.