Motorola Moto G7 and G7 Plus (codenamed: river/lake) launched in February 2019. The handset came with Android 9.0 Pie. On this page, we will guide you to install the unofficial Android 13 Custom ROM on Moto G7/Plus. If you are someone who wants to install the vanilla version of Android 13, then this guide is for you. 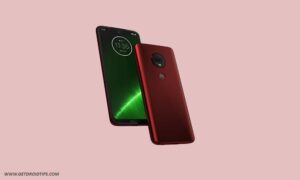 The Moto G7 smartphone will come with a 6.4-inch display which is a big upgrade for the Moto G series smartphone, the Moto G6 series smartphones have a 5.7-inch display. The display supports 1080×2340 pixels of resolution and a very small notch on top of the display. The phone is powered by an Octa-Core CPU on board along with an unknown chipset. It will come with 4 GB of RAM and 64 GB of internal storage under the hood. The phone will come with a 16-megapixel main camera and a 5-megapixel secondary camera on the backside. On the front side, it will have a 12-megapixel camera for selfies and video callings. It will have a 3,500 mAh capacity battery inside the body. The Moto G7 will feature a fingerprint scanner on the backside.

Motorola Moto G7 Plus is powered by a Qualcomm Snapdragon 636 (14 nm) chipset coupled with 4GB of RAM and 64GB of internal storage. It also supports a 1TB external memory card. The device came out of the box with Android 9.0 Pie and was backed by a 3000 mAh battery (Non-removable). As far as the camera is concerned, the device has a Dual-camera setup with 16MP + 5MP primary sensors and a selfie camera with a 12MP lens. Other connectivity option includes 4G-VoLTE, GPS, Glonass, Bluetooth, Mobile Hotspot, accelerometer, ambient light sensor, gyroscope, proximity sensor, and compass/ magnetometer. etc. The Motorola Moto G7 Plus comes with a rear fingerprint sensor feature.

As the title suggests, we’ve shared the requirements and steps to flash the AOSP Android 13 build on the Moto G7/Plus (river/lake) variant.

You can skip this adb and fastboot part if you have already installed TWRP Recovery on your Moto G7/Plus.

You must first unlock the bootloader on your Moto G7 and Moto G7 Plus to enjoy any custom ROM.

Here, you will find all the Android 13 custom ROM for your Moto G7/Plus (river/lake).

Your device will now boot to the newly installed OS. With this, we conclude the guide on installing the AOSP Android 13 on Moto G7/Plus. Remember that the first boot might take time, and you might have to set up your device from scratch.

Flashing the ported Android 13 on your Moto G7/Plus will give you an early taste of the latest Android OS version. It looks like the Moto G7/Plus model won’t officially receive the Android 13 update from the manufacturer. So, it’s a good idea to get most of the features and visual treatment. However, if you find any extra bugs or stability issues, you should report them to the respective forum.