Apple’s Siri Voice assistant is one of the most popular AI Assistance, Which used in Apple iDevice like Apple Watch, Mac, Apple TV, and HomePod alongside Apple iPhone and iPhone. But it was only working on the latest Version like Mac With MasOC Catalina 10.15.1, Apple TV With tvOS 13.2, iPhone with iOS 13.2 and iPad With IOS 13.2. On the other hand, Apple enabled it. By default, with the user’s knowledge with “Share Audio Recording,” Prompt.

Whereas, Guardian Reported they also hear some of the Confidential details. Apple responds and Suspends the Siri Audio Grading Program, and then later, they provide an iOS 13.2 and iPadOS 13.2 to disable and Delete Siri History from Apple Server. If you were not aware of How it Work, We are going to teach you how you can remove Siri history from Apple Server.

How to Cast Apple TV to Chromecast? 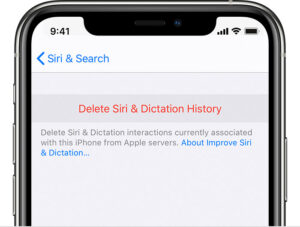 Apple Send Siri Voice Data to there server, but it not linked to Apple ID, Email Address, or other data. Apple allows you to remove all of your Voice requests that you ask Siri. Meanwhile, your data remains for Six Months with your identification. Later Apple used to develop and improve Siri, Dictation, and other language processing features like voice control.

Note: you must be connected to the internet.

It Works on Apple TV running tvOS 13.2 or later.

Note: Deleting Siri and Dictation history from your device doesn’t change the choice you made about Sharing audio Recording. You also have to Change Privacy preferences. We Use iOS 13 and iPadOS 13 for Reference to disable Siri History collection on iDevice.