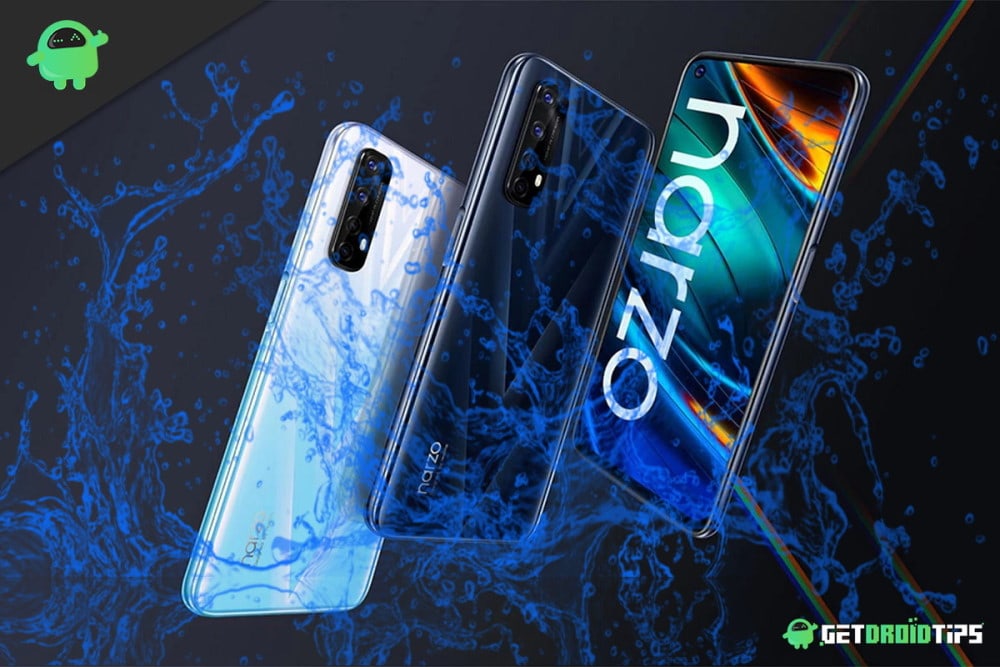 Released on September 28, 2020, Realme Narzo 20 is the latest smartphone model by Realme. It is a budget smartphone. You can have all the necessary features at a minimal price. Narzo 20 has GSM/HSPA/LTE network technologies, but not 5G. As expected from a budget smartphone, the dimension of the device is 164.5 x 75.9 x 9.8 mm and weighs 208g.

Not much heat for your arms, but you won’t get that premium experience. However, if you are a dual SIM user, then you can insert two nano-SIM cards in Realme Narzo 20. The size of the screen is 6.5 inches of IPS LCD capacitive touchscreen, which provides 720 x 1600 pixels resolutions along with 16M colors. You can but the smartphone in Glory Silver or Victory Blue color variants.

Realme Narzo 20 runs on MediaTek Helio G85 chipset along with an Octa-core (2×2.0 GHz Cortex-A75 & 6×1.8 GHz Cortex-A55) CPU and a Mali-G52 MC2 GPU. Thus, it enables you to render almost all games, applications, and videos on your Realme Narzo 20 device. It has the latest Android 10 OS with the Realme UI to give the stock Android a Realme feel. Fortunately, there is a dedicated card slot for microSDXC, so you can insert your external memory. Depending on the price, you can have 64GB of internal memory with 4GB RAM or 128GB internal memory.

The back has a triple camera setup of 48MP+8MP+2MP, with LED flash, HDR, and panorama support. The selfie camera is a single camera only of 8MP with HDR support. There is a 3.5mm headphone jack support, and the fingerprint sensor is located at the back. Common features like WLAN, Bluetooth, GPS, and sensors like accelerometer, compass, etc. are also included in the device. Narzo 20 supports 18W fast charging for it’s 6000Mah non-removal Li-Po battery.

Is Realme Narzo 20 a Waterproof device?

If the device was waterproof, Realme would have done the IP evaluation test, and the IP ratings would have been mentioned on their Webpage.

However, that isn’t the case because the device is not waterproof. But Realme Narzo 20 can still withstand some water splashes or some amount of dust due to its slick body design. Many individuals have tested the device, and they found out that the device is quite water-resistant. At least it can withstand 1.30 min under little water, but underwater the display stops working very soon which means liquid damage.

A prior release of Narzo 20, on September 25, 2020, Realme has launched the Narzo 20 Pro model. Like Narzo 20, it also doesn’t have the 5G support, but in other aspects, the specs are superior for gaming purposes. You can get Narzo 20 Pro in White Knight and Black Ninja color variant. The dimension of the smartphone is about 162.3 x 75.4 x 9.4 mm and weighs 191g, a little lighter than the Narzo 20. It also supports dual Nano-SIM cards and has a dedicated slot or the microSDXC card for your external memory.

Narzo 20 Pro uses an IPS LCD capacitive touchscreen display of 6.5 inches,  capable of 16M colors and 1080 x 2400 pixels resolutions. Even more, the screen is protected well by the Corning Gorilla Glass unlink Narzo 20. The smartphone runs on Mediatek Helio G95  chipset along with Octa-core (2×2.05 GHz Cortex-A76 & 6×2.0 GHz Cortex-A55) CPU and a Mali-G76 MC4 GPU, perfect for gaming. Depending on the price, you can get Narzo 20 Pro of 64GB internal memory/6GB RAM.

The rear camera has quad cameras of 48MP+8MP+2MP+2MP with LED flash, HDR, and panorama support. The front selfie camera has a single camera of 16MP with HDR. There is support for 3.5mm headphone jack along with other common features like WLAN, Bluetooth, GPS, USB, etc. The fingerprint sensor is located at the side. Unlike Narzo 20 on the rear, other sensors like gyro, compass, etc. are also present. The smartphone supports fast charging of 65W for its 45000 mAh Li-Po battery, which is, of course, non-removal.

However, that isn’t the case. Since the device is not built with the intention of being a waterproof device, it makes sense that they haven’t done a test.

Due to Corning Gorilla Glass, Narzo 20 Pro might be a splashproof and dustproof device but not waterproof. Also, it is possible that it can survive in water like Narzo 20 for a minimal amount of time.

After doing an extending waterproof test on both the device, the results are astonishing. As to our expectations, both the devices are not either splashproof resistant or waterproof. This is a huge dealbreaker for many customers, but at this price segment, it is hard for the company to give such features.

Since Realme Narzo 20 and 20 Pro are not officially waterproof or water-resistant, we recommend users to take proper care of their devices. Not only that, you must take proper care of your smartphone as any accidental water or juice spill can leave your device non-functional.