Samsung’s Galaxy Z Fold 4 is unlike anything else on the market. The devices are designed to be conventional smartphones but capable of unfolding into small tablets when more screen space is needed. Aside from the flagship specs, it supports stylus use and takes stunning photographs and videos. With the invention of its foldable smartphone, Samsung pioneered the concept.

After a rocky start, Samsung’s original Galaxy Fold was delayed until fall 2019. Even though Samsung did not make any significant changes to the Galaxy Fold this year, it has refined the device so that it could possibly be considered a daily driver. There is no doubt that minor design changes have significantly impacted the user experience with the device.

There has been no increase in the size of the front screen this year, but it is slightly wider. But, those who are buying this amazing and innovative smartphone are confused about whether or not they will get the Android 13 update anywhere soon by the end of this year. That’s the main reason we are here with this guide. Here we will try to clear everything that you have on your mind. So, let’s get started with the article. 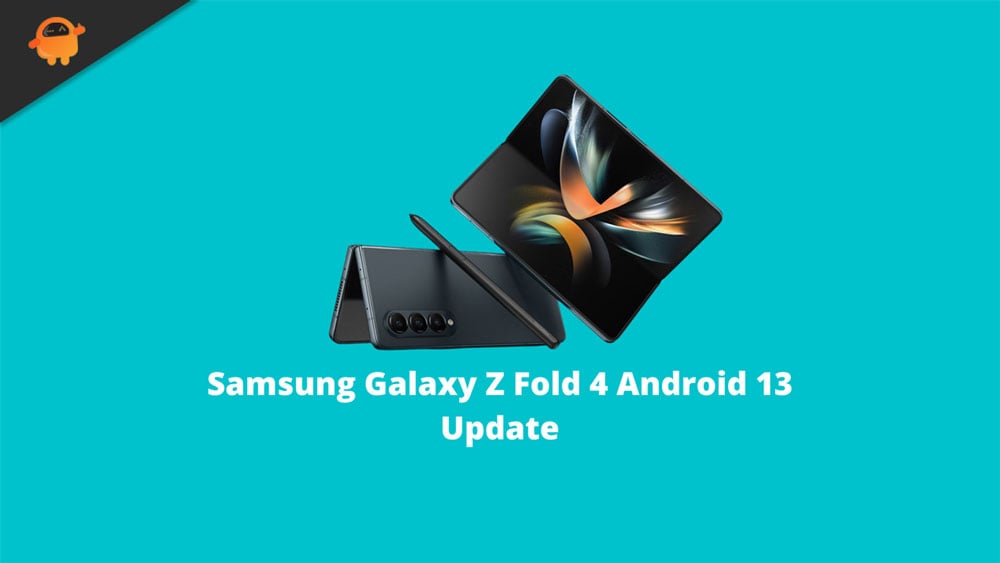 I know why you are getting eager to know whether or when the Samsung Galaxy Z Fold 4 gets an Android 13 (One UI 5.0) update or not; then you are in the right place. There are many users who frequently ask for this in the different community forums. So, before we tell you about the Android 13 news for Samsung Galaxy Z Fold 4, let’s first discuss about the feature of this amazing smartphone.

It is estimated that Android 13 will be released in Q3 2022, according to Google’s schedule. Since Google has already rolled out their two developer previews, they are now rolling out the beta builds to developers for testing. As far as Android 13 is concerned, it seems that its successor has plenty of additional features and improvements over Android 12. ‘Material You’ was a major change to Android 12’s UI and design last year that we already saw and used.

There are also improvements to app notifications. As well as intuitive QR scanner support, an enhanced silent mode, media transfer controls via tap, and multiple payment profiles, users will find a variety of other features.

It has big shoes to fill when it comes to the Galaxy Z Fold 4. With its predecessor, the Galaxy Z Fold 3, Samsung has created one of its best foldable phones. There were significant improvements, such as the S Pen’s support and water resistance.

However, compared to its predecessor, only minor changes have been made to the design this year. In addition to the smaller hinge, the cover display bezels are smaller as well. Furthermore, Samsung has lowered the weight of the device. Galaxy Z Fold is the lightest smartphone so far, weighing just 263g.

With a 22:9 aspect ratio and slim bezels, the 6.2-inch Dynamic AMOLED display has a resolution of 2316 x 904 pixels. However, the panel does support a 120Hz refresh rate but does not support the S Pen. Featuring a 4nm Qualcomm Snapdragon 8+ Gen 1 processor and 12GB of RAM, the Galaxy Z Fold 4 offers a high level of performance.

The performance of the CPU, GPU, and NPU is improved significantly by the chipset. Several internal storage options are available, including up to 1TB. There is no external expansion slot for microSD cards. In order to enhance the audio experience, stereo speakers are present. The power button on the device is embedded with a fingerprint sensor.

This model has the same 4,400mAh battery as its predecessor, which supports fast charging at 25W. Unfortunately, there is no charger included in the box of the Galaxy Z Fold 4. Among the Galaxy Z Fold 4 camera system features is a 50-megapixel primary sensor with Dual Pixel AF and optical image stabilization.

Updated on September 29, 2022: Samsung started seeding July 2022 security patch update for the device with software version F936BXXU1AVHH. The update is based on Android 12.