Samsung Galaxy S10E (codenamed: beyond0lte) launched in February 2019. The handset came with Android 9.0 Pie. On this page, we will guide you to install the unofficial Android 13 Custom ROM on Galaxy S10E. If you are someone who wants to install the vanilla version of Android 13, then this guide is for you.

The Samsung Galaxy S10e is a flagship smartphone that comes with a host of features. It has fast charging technology as well as wireless charging support. 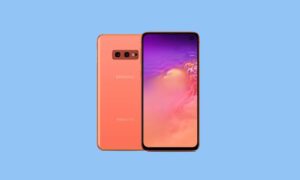 Samsung Galaxy S10E comes with a 5.8-inch touch AMOLED display with an aspect ratio of 19:9. Samsung Galaxy S10e is powered by an octa-core Samsung Exynos 9820 chipset paired with 6GB of RAM. While the internal storage comes in 128GB which can be expanded via MicroSD card up to 512GB. Galaxy S10e sports a 12MP primary (f/1.5) and a secondary 16MP camera (f/2.2) on the rear side. It also features an LED flash and PDAF. It packs a 10MP selfie shooter on the front side which supports the AI Face Unlock option.

How to Install AOSP Android 13 on Galaxy S10E (beyond0lte)

As the title suggests, we’ve shared the requirements and steps to flash the AOSP Android 13 build on the Galaxy S10E (beyond0lte) variant.

You can skip this adb and fastboot part if you have already installed TWRP Recovery on your Galaxy S10E.

You must first unlock the bootloader on your Galaxy S10E to enjoy any custom ROM.

Here, you will find all the Android 13 custom ROM for your Galaxy S10E (beyond0lte).

Your device will now boot to the newly installed OS. With this, we conclude the guide on installing the AOSP Android 13 on Galaxy S10E. Remember that the first boot might take time, and you might have to set up your device from scratch.

Will Samsung Galaxy S10E Get Official Android 13 (One UI 3.0)Update?

According to Samsung’s official blog, the company is committed to delivering 3 major Android OS updates and 4 years of Android Security Patches. Well, Samsung Galaxy S10E came out of the box with Android 9.0 Pie and later received its 2 major OS updates; Android 10, 11, and 12. There are no chances that these devices will get the Android 13 (One UI 5.0) as they have not yet received the Android 12 update.

It won’t justify if we are talking about whether this device meets the minimum requirement for the update or not; you can try the Android 13 custom ROM on it. If you still want to inspect this device’s eligibility, let’s hover over the specification section.

Updated on November 11, 2022: Samsung started seeding the October 2022 security patch update for the device with software version G970FXXUGHVJ5. The update is based on Android 11.

Updated on September 29, 2022: Samsung started seeding August 2022 security patch update for the device with software version G970FXXUFHVG4. The update is based on Android 11.