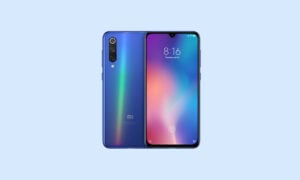 Xiaomi Mi 9 SE is powered by a Qualcomm Snapdragon 712 chipset coupled with 6GB of RAM and 64/128GB of internal storage. The device came out of the box with Android 9.0 Pie under MIUI 10 and was backed by a 3070 mAh battery (Non-removable). As far as the camera is concerned, the device has a Triple-camera setup with 48MP + 8MP + 13MP primary sensors and a selfie camera with a 20MP lens.

As the title suggests, we’ve shared the requirements and steps to flash the AOSP Android 13 build on the Xiaomi Mi 9 SE (grus) variant.

You can skip this adb and fastboot part if you have already installed TWRP Recovery on your Xiaomi Mi 9 SE.

You must first unlock the bootloader on your Xiaomi Mi 9 SE to enjoy any custom ROM.

Here, you will find all the Android 13 custom ROM for your Xiaomi Mi 9 SE (grus).

Your device will now boot to the newly installed OS. With this, we conclude the guide on installing the AOSP Android 13 on Xiaomi Mi 9 SE. Remember that the first boot might take time, and you might have to set up your device from scratch.

Flashing the ported Android 13 on your Xiaomi Mi 9 SE will give you an early taste of the latest Android OS version. It looks like the Xiaomi Mi 9 SE model won’t officially receive the Android 13 update from the manufacturer. So, it’s a good idea to get most of the features and visual treatment. However, if you find any extra bugs or stability issues, you should report them to the respective forum.