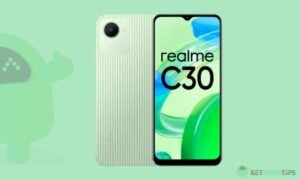 The Realme C30 features a 6.5-inch IPS LCD panel with a 60Hz refresh rate. It has a resolution of 720 x 1600 pixels and an aspect ratio of 20:9 ratio. The screen has a peak brightness of 400 nits. Under the hood, we have the Unisoc Tiger T612 chip built on a 12 nm manufacturing process. It is an octa-core processor with two Cortex-A75 cores clocked at 1.8 GHz and six Cortex-A55 cores clocked at 1.8 GHz. For handling the graphics-intensive tasks, we have the Mali-G57.

Will Realme C30 Get Android 12 Update?

Regrettably, we do not have any particular release date for Android 12 for the Realme C30. But, you can bookmark this page as we will soon add an update tracker to this page along with respective links. So, just stay tuned with GetDroidTips.