Fortnite has a lot of great features and items that make the game worthwhile and enjoyable. One of these items loved by lots of players are the skins, but players hardly pay attention to the gliders, and this is sad because Fortnite has really exciting gliders. In this article, I will be pointing out the top 15 rarest gliders in Fortnite, in no particular order. 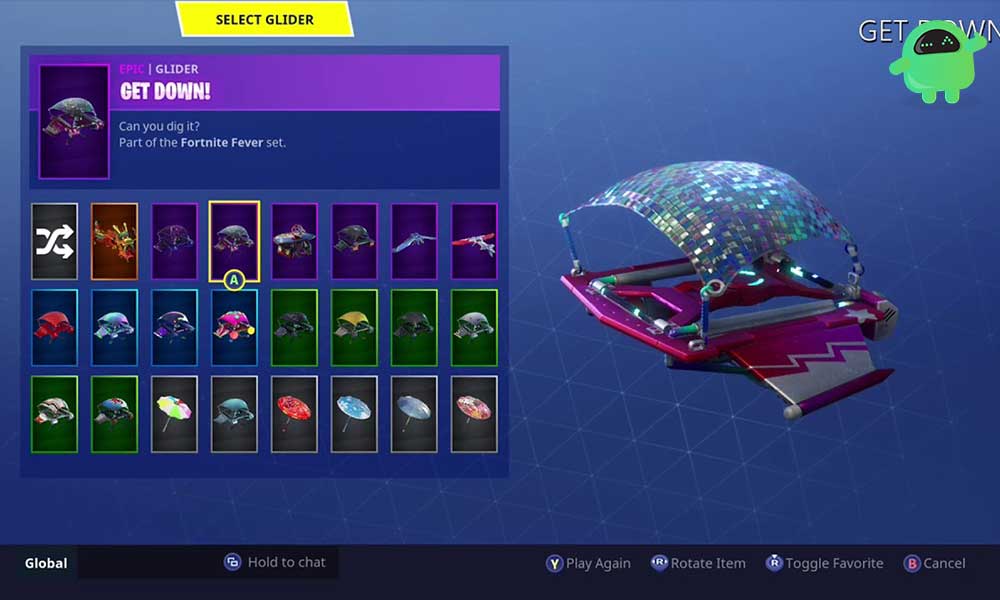 The Cozy Coaster is a Fortnite glider that was released in December 2017 as part of the Merry Christmas set and was available for purchase in the Item Shop.

Purchase of the Cozy Coaster was only open for a while, and only a few players actually purchased it before it disappeared from the store. That’s despite the fact that it was released at a time the game was popular, and it might not be making a reappearance as it was especially for the Christmas period and Epic intends to introduce something new for this period.

This is why this glider is one of the rarest gliders in Fortnite.

This glider was released in December 2017 as well. In Season 2 of Fortnite, Sir Glider the Brave was made available to players in tier 35 of Battle Pass, and it was free as a reward. It is therefore surprising that the glider is rare, due to the fact that it was free, but players possibly didn’t put in the work to have earned this glider, or just didn’t give enough cognisance to the free rewards in the game.

If you missed out on this glider, there is nothing you can do about it because the glider never reappeared in the game after its disappearance.

The High Octane was made available in the game as a reward for a series of challenges. First, you would have to get to tire 100 of the paid battle pass in Season 3, then complete five of seven difficult challenges.

When you do all these, then the High Octane will be given to you as a reward. So, if you actually never reached the 100th tire of Season 3’s battle pass or you didn’t complete the required number of challenges, there was no way you could have gotten the High Octane, and you can actually never get it again, and this makes it a very uncommon glider in the game.

One of the oldest gliders in the history of Fortnite, Mako was introduced to the game in October 2017 and was made available for purchase in the Item Shop in Season 1 or by attaining level 25 in Season 1 of the game.

A very beautiful glider decorated with rainbows and stars, released as part of the Sunshine and Rainbows set, the Rainbow rider could be gotten in tier 15 of the battle pass in Season 3.

The glider was paid and was exclusive to Season 3, thus, it has not made a reappearance to the game. So, if you were lucky to have grabbed it while you could, good for you. If not, there is nothing that can be done about it, you can’t have it again.

Get Down was introduced as a part of the Fortnite Fever set, was only made available upon attainment of tier 15 of Season 2’s battle pass.

That was the only way to get it as it was not available in the store, so if you bypassed Season 2’s battle pass, then there is nothing you can do about your lack of this particular shiny glider.

A very sleek, jet-powered glider released as part of the Superhero sets in Season 4, to obtain the Intrepid, you had to get to Tier 79 of Season 4’s battle pass.

This glider is rare probably because of the work you have to put in to acquire it, but if you actually didn’t play the battle pass in Season 4, or you didn’t get all the way to tier 79, then this glider is gone, and not making a reappearance.

A dark blue glider with advanced looks which changes the way the default glider of a player looks without affecting the gameplay in any way. So, despite the fact that it looks advanced, it most certainly doesn’t make the glider more efficient.

It was introduced into the game as part of the Geoforce bundle which you had to purchase, which is only possible if you buy an extra graphics card, and was available at the Item Shop.

All these explain why players did not bother themselves with getting the glider, thereby making it rare to have among players.

It was made available in the game upon getting to tier 39 of the battle pass in Season 5 only, and if you didn’t get up to that level or you just skipped the battle pass, there was no way you could have gotten the Conquest glider, and there is no way you can get it anymore, it is gone for good.

One thing about the Snowflake Umbrella was that in order to get it and add it to your collection, you had to be skilled in the game. It was introduced into Fortnite in Season 2 of the game, and to win it, you had to compete and win a particular game in that season, so even if you played and didn’t win, this glider was not going to be yours.

Fewer players played the game back then, and since then, it has not made s reappearance into the game, thus, only a few of the older players have it.

Introduced as part of Fortnite’s Halloween collection, Fortnitemares and to get it, you had to complete all Fortnitemares’ 4 challenges. Part of the Western Wilds set, this glider actually took a lot of efforts to get it, which players were not willing to put in for such minimal reward, as there were other challenges that offered a greater reward.

This is what actually made the Dark Engine a rare glider among players of the Fortnite game.

A pink glider with its top covered with colourful decals that look like candy. Part of the Sweet Tooth set, all you had to do to get this glider was to purchase the Battle Pass in Season 4 and then, play all the way to tier 15, and voila! it is yours.

If you didn’t purchase the battle pass in Season 4 or you never got to tier 15, there was and is no other way for you to actually get this candy-like glider as it is long gone, and hasn’t returned.

This boring glider which looks nothing like its description was introduced into the game as a part of the Storm Fusion set. It was the final glider in Season 2’s battle pass, which means that you had to play through every single tier, up until the 42nd, before you are able to call the Royale X yours.

In Season 2, the players of the game were not really many and only a few of them actually had the patience to go through a battle pass till the last level, making the number of people that have the Royale X very few, thereby contributing to its rarity.

Introduced as part of the RPM set, the downshift glider changes the default appearance of your glider into jet-black, with red streaks along the edges. To get this glider and add it to your collection, you needed to attain tier 25 of Season 5, by either buying the tiers or grinding each tier to level up in the free version.

This is the only way you can get the Downshift glider even though it takes a lot of time and effort, and is probably a reason why it is rare. Once you missed the glider in Season 5, there is no going back and it has also not made a reappearance since then.

The last glider on this list of rarest gliders in Fortnite is the Discovery Glider. Unlike a lot of other gliders that can be gotten by playing a particular season’s battle pass, what you have to do to get this glider is to actually purchase a Samsung phone, then it comes as a purchase bonus.

That is a very high price to pay just for the sake of obtaining a glider, and it explains exactly why it is rare; who is actually willing to pay that much for a glider?

These are the top 15 rarest gliders in Fortnite, so if you have one or more of them lying around in your collection, take them out and show the other players who the boss is, as you have been in the game for so long to have acquired any of these gliders.