Xiaomi Poco X3 NFC (codenamed: Surya) was launched in September 2020. The handset came with Android 11 and was later upgraded to Android 12. On this page, we will guide you to install the unofficial Android 13 Custom ROM on Poco X3 NFC. If you are someone who wants to install the vanilla version of Android 13, then this guide is for you.

Xiaomi Poco X3 NFC is one of the best budget smartphones you can buy now globally. The device packs in strong specs, an excellent camera, a beautiful display, and absolutely fantastic battery life. 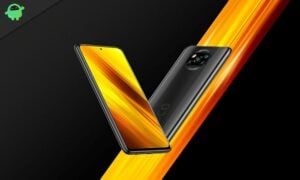 The Poco X3 NFC is the latest enthusiast-branded phone by Poco which is a subdivision of Xiaomi. After its wildly successful flagship Poco F1 and the well-received budget offering Poco X2, the company has released the Poco X3 NFC. The phone was announced on September 7th, 2020 and it seems like Poco hasn’t held back with the specs, display, and other features of this phone. The phone starts at 16,999 or $230 which is excellent pricing for a device of this caliber.

The Poco X3 NFC is powered by an octa-core Snapdragon 732G processor, which is only a slight upgrade from the 730G that we found in the Poco X2. It is backed by either 6 or 8 GB of RAM and comes with a base storage of 64 or 128 GB which can be further expanded up to 256 GB via a micro SD card. The Poco X3 NFC has a huge 6.67-inch IPS display to the front which refreshes at 120Hz and has a pixel density of 395 pixels per inch. It has a tiny hole-punch cutout at the top which houses the front camera sensor.

Speaking of cameras, the Poco X3 NFC has a quad-camera setup to the rear with a configuration of 64+13+2+2 MP and a single front-facing 20MP sensor. As the name implies, the phone also comes with NFC which makes cardless payments much easier. The Poco X3 NFC has a mammoth 5160 mAh battery and comes with a fast charger bundled with the phone. It runs atop Android 10 out of the box.

How to Install AOSP Android 13 on Poco X3 NFC (Surya)

As the title suggests, we’ve shared the requirements and steps to flash the AOSP Android 13 build on the Poco X3 NFC (Surya) variant.

You can skip this adb and fastboot part if you have already installed TWRP Recovery on your Poco X3 NFC.

You must first unlock the bootloader on your Poco X3 NFC to enjoy any custom ROM.

Here, you will find all the Android 13 custom ROM for your Poco X3 NFC (Surya).

Your device will now boot to the newly installed OS. With this, we conclude the guide on installing the AOSP Android 13 on Poco X3 NFC. Remember that the first boot might take time, and you might have to set up your device from scratch.

Flashing the ported Android 13 on your Poco X3 NFC will give you an early taste of the latest Android OS version. It looks like the Poco X3 NFC model won’t officially receive the Android 13 update from the manufacturer. So, it’s a good idea to get most of the features and visual treatment. However, if you find any extra bugs or stability issues, you should report them to the respective forum.