Realme X3 and X3 SuperZoom (codenamed: RMX2081/RMX2083 and RMX2085/RMX2086) launched in June 2020. The handset came with Android 10 Q and was later upgraded to Android 11. On this page, we will guide you to install the unofficial Android 13 Custom ROM on Realme X3/SuperZoom. If you are someone who wants to install the vanilla version of Android 13, then this guide is for you. 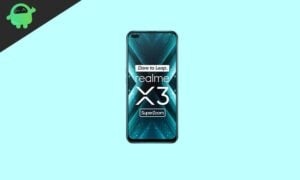 But before we go ahead and look at the update tracker, let us get a look at the devices themselves. Both the Realme X3 and X3 Superzoom come with 6.6-inch IPS LCD 120Hz refresh rate displays. Notably, the screen is a Full HD+ panel with 399 PPI. The duo is powered by the Qualcomm Snapdragon 885+ chipset, which although is a year old now, is nowhere underpowered. There is no dedicated memory card slot on either Realme X3 or X3 Superzoom but Realme X3 comes with a 128GB onboard storage option, while the Realme X3 comes in 128/256GB onboard storage options.

How to Install AOSP Android 13 on Realme X3/SuperZoom

As the title suggests, we’ve shared the requirements and steps to flash the AOSP Android 13 build on the Realme X3/SuperZoom variant.

You can skip this adb and fastboot part if you have already installed TWRP Recovery on your Realme X3/SuperZoom.

You must first unlock the bootloader on your Realme X3/SuperZoom to enjoy any custom ROM.

Here, you will find all the Android 13 custom ROM for your Realme X3/SuperZoom

Your device will now boot to the newly installed OS. With this, we conclude the guide on installing the AOSP Android 13 on Realme X3/SuperZoom. Remember that the first boot might take time, and you might have to set up your device from scratch.

Flashing the ported Android 13 on your Realme X3/SuperZoom will give you an early taste of the latest Android OS version. It looks like the Realme X3/SuperZoom model won’t officially receive the Android 13 update from the manufacturer. So, it’s a good idea to get most of the features and visual treatment. However, if you find any extra bugs or stability issues, you should report them to the respective forum.