iPhone and iPad users complain about the Focus feature not working in the latest iOS 16 & iPadOS 16 software. Focus is the next level of the traditional Do Not Disturb feature. Apple’s in-house developers took notes from the user’s feedback and developed the Focus feature. The internet, social media, and smartphones are shifting the focus on unproductive activities. Apple took the challenge and improved the DND features on iPhone and iPad.

Why is Focus Mode Not Working on iOS 16/iPadOS 16? 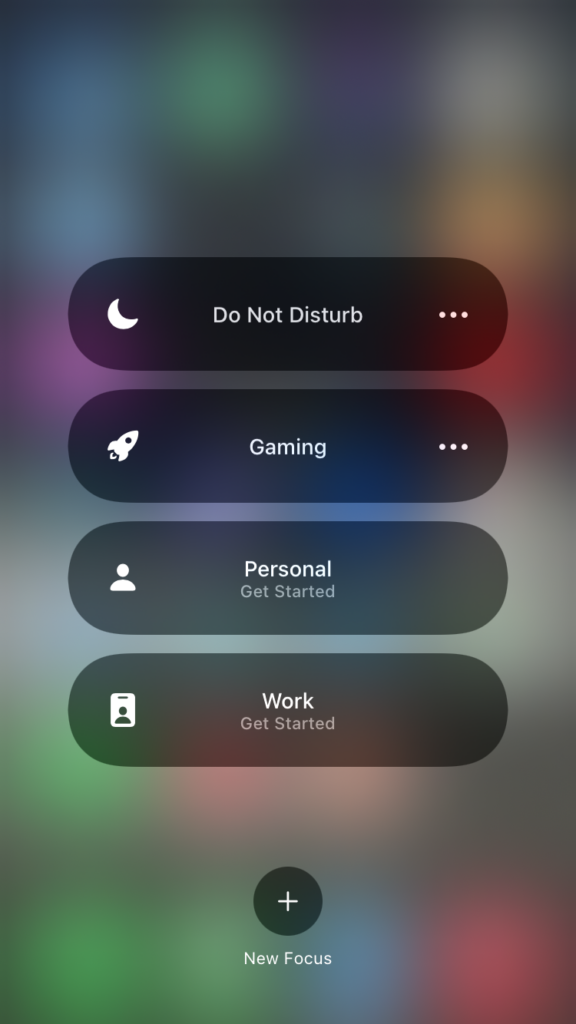 Focus is a built-in feature introduced in the earlier mobile operating system. Apple improved the functions for business people or someone who wants to concentrate on productive tasks. There are reasons why the advanced Do Not Disturb feature is not working on your iPhone. Let us look at contributing factors and prevent the problems later.

Almost everyone configures the Focus incorrectly and then complains about the iOS shortcomings. The in-house Apple developers have simplified the advanced DND feature, but you can make a mistake. I have shown you how to rectify the Focus configuration manually.

All iPhones have a dedicated physical silent button. My iPhone went into silent mode multiple times in the past. I haven’t turned on the silent mode, and the switch automated the task. The iPhone silent switch is a decade-old problem, and the button may have caused the trouble. You can try a few solutions to remove the debris in the physical button and rectify the issue.

iOS 16 is a new software edition from the Apple developers team. Read online news about the latest software edition from the in-house developers. Many iPhones and iPad suffer from battery drain and other issues due to the new software version. Visit the search engine and watch video iOS/iPadOS reviews specific to your device. In the meantime, I request everyone to backup the iPhone and iPad as a precaution. Use iTunes and iCloud to backup the saved data.

My iPhone has been active for many weeks without getting sleep time. Apple noted the behavior long back, and they optimized the software accordingly. Give the devices a break for an hour. Let the device and software breathe a good night’s sleep once a week.
You can follow the tutorial below to turn off and turn on the iPhone/iPad without a Side button.

5. Swipe the slider to the right side and turn off the device.

Give your iOS device a minimum of ten minutes’ rest. The smartphone will discharge the electric charge from the internal components. The iOS/iPadOS software reboots in the next session. 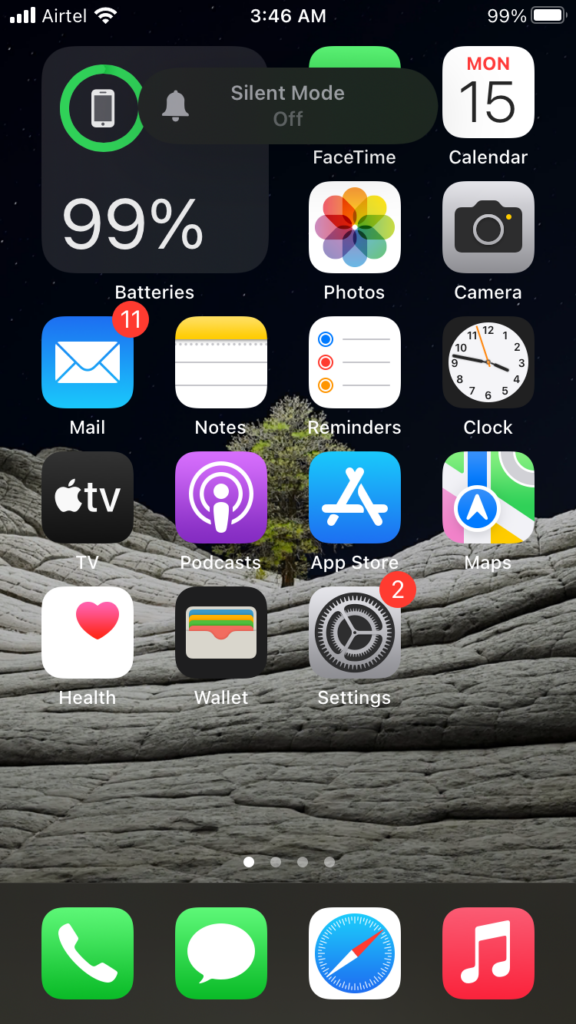 My current iPhone faced Silent Switch issues in the past. I had to switch to silent mode on the phone because the button was acting crazily. I got annoyed by the behavior and enabled the silent mode manually. Take your time to inspect the physical button in the iPhone and learn the truth yourself.

A. Clean the physical button.

B. Remove the debris using soft bristles brush. You can use a makeup brush for the cleaning process.

C. I forbid you from using any liquid content while cleaning the iPhone buttons.

D. Turn off the iPad or iPhone before cleaning the physical silent button.

I solved the problem by updating the iOS version in the past. I recommend the readers clean the iPhone/iPad since dust accumulates in the gaps.

Focus restricts all apps from sending notifications and prevents the phone from popping the alerts. Users have to add specific apps in the Focus to receive notifications. The advanced DND feature notifies the new messages from the application. Follow my lead to add the installed apps in the Focus. 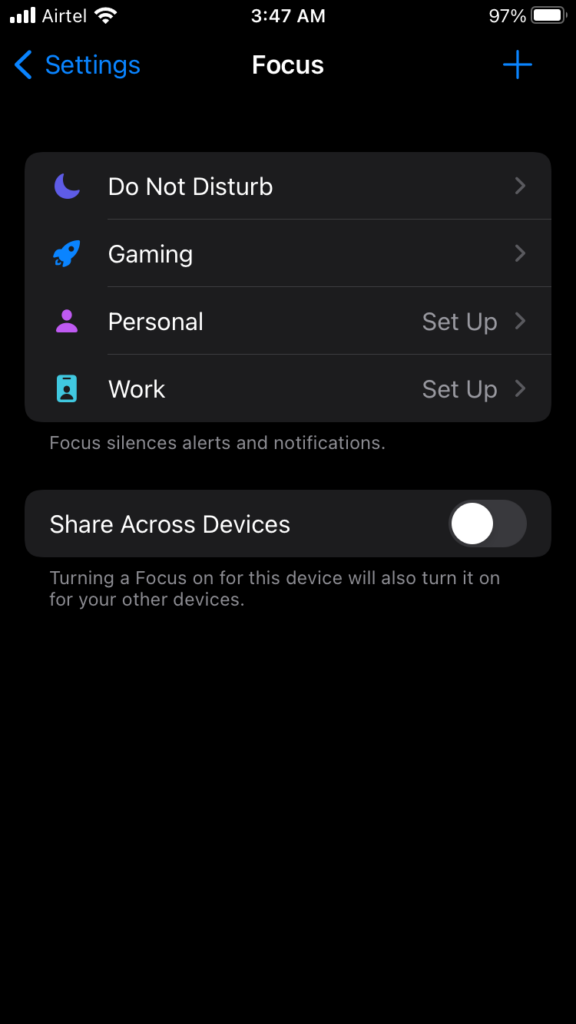 4. Tap on the “Apps” section in the second row. 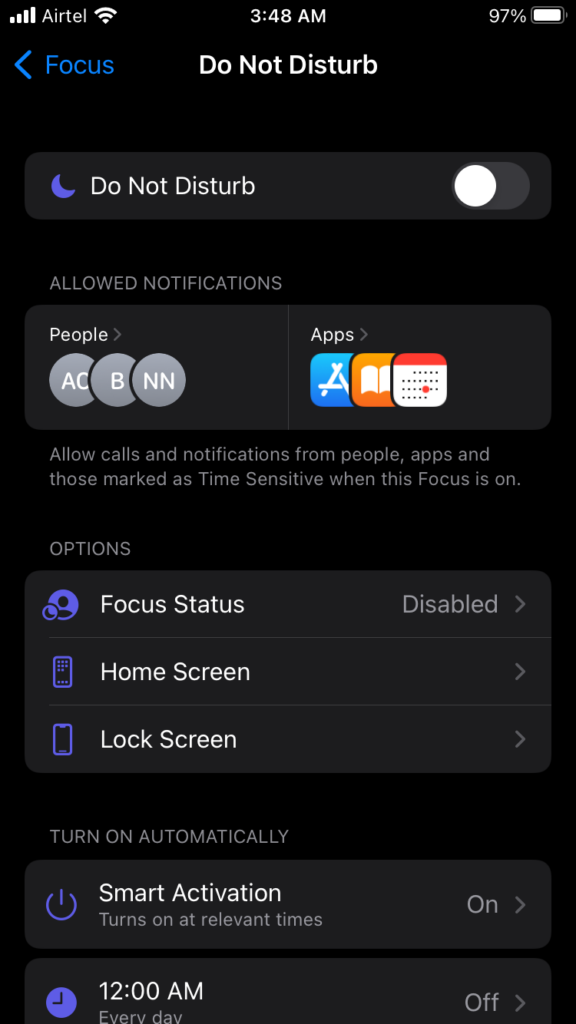 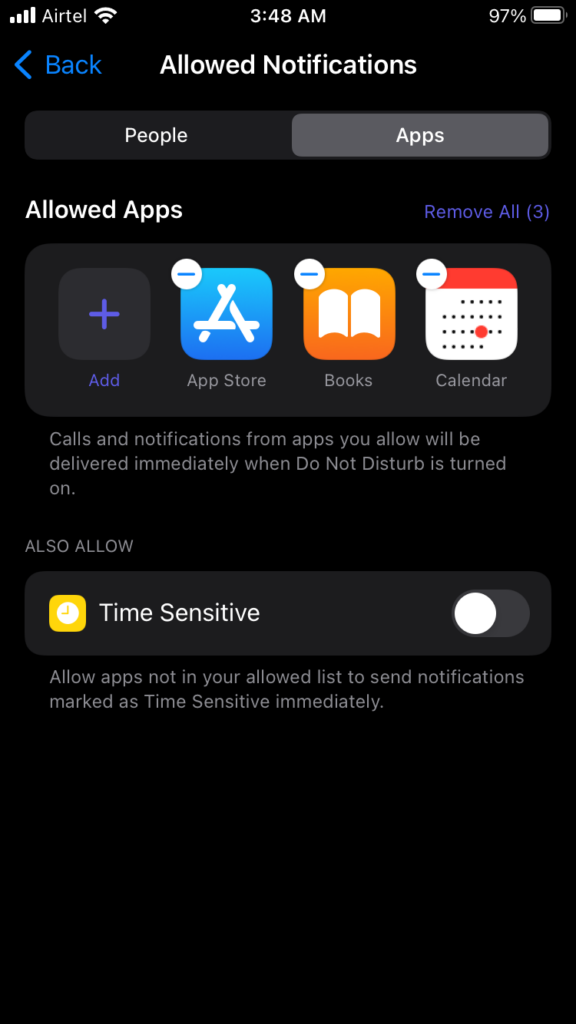 Remove All: The DND will stop sending notifications to the phone.

Add: You can add new apps in the section and keep receiving new notifications.

6. Tap on “Remove Apps” to remove them from the list. 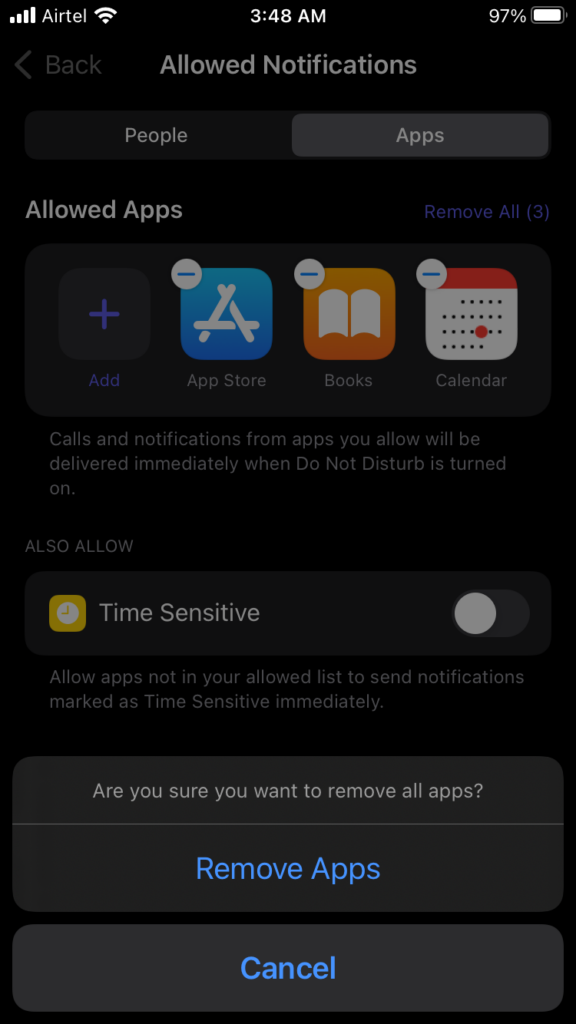 7. You can add new apps to send new updates. 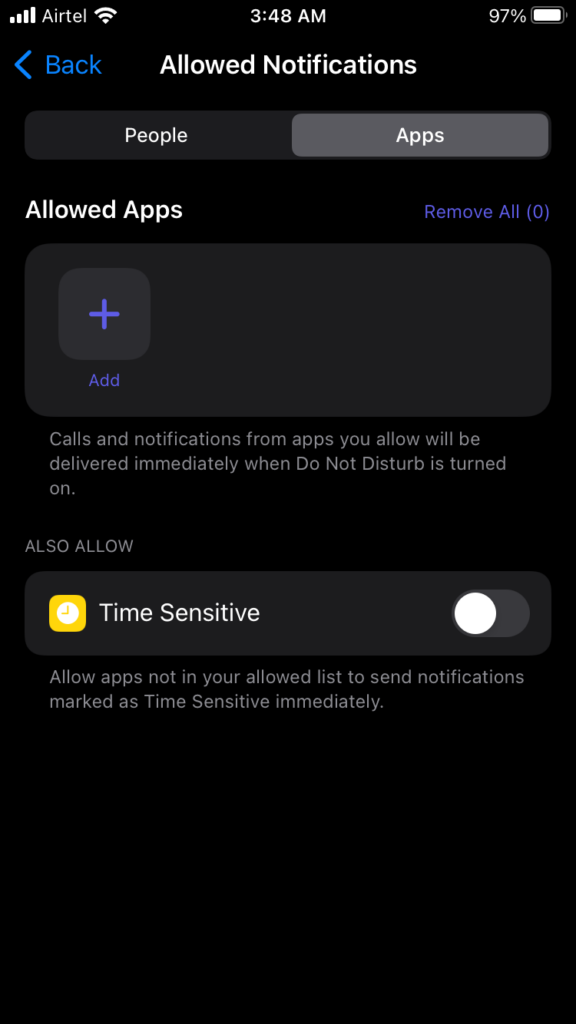 You can unrestrict or restrict apps in the Focus feature. You have control over the priorities and allow specific from sending new messages. You can let email client or team management apps send alerts.

The Focus might be working, but you have added or didn’t add contacts from the list. We have two scenarios here and address them using one solution.

A. You will receive calls, messages, and alerts from the contacts added in the Focus feature.

B. The iPhone or iPad notifies new messages or calls you don’t wish to bother.

Let me show you how to add/remove saved contacts in the Focus feature.

4. Tap on the “People” section in the second row. 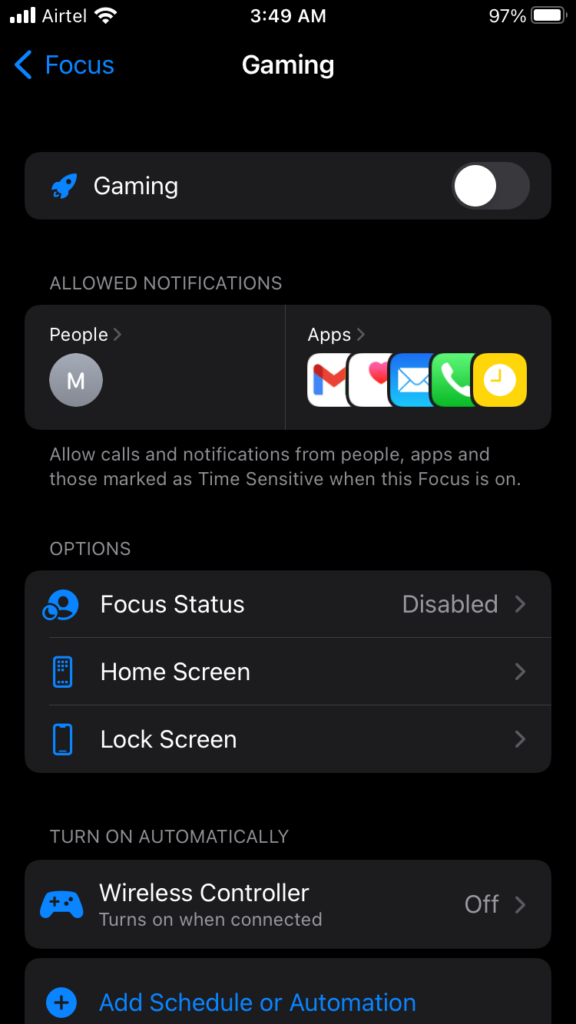 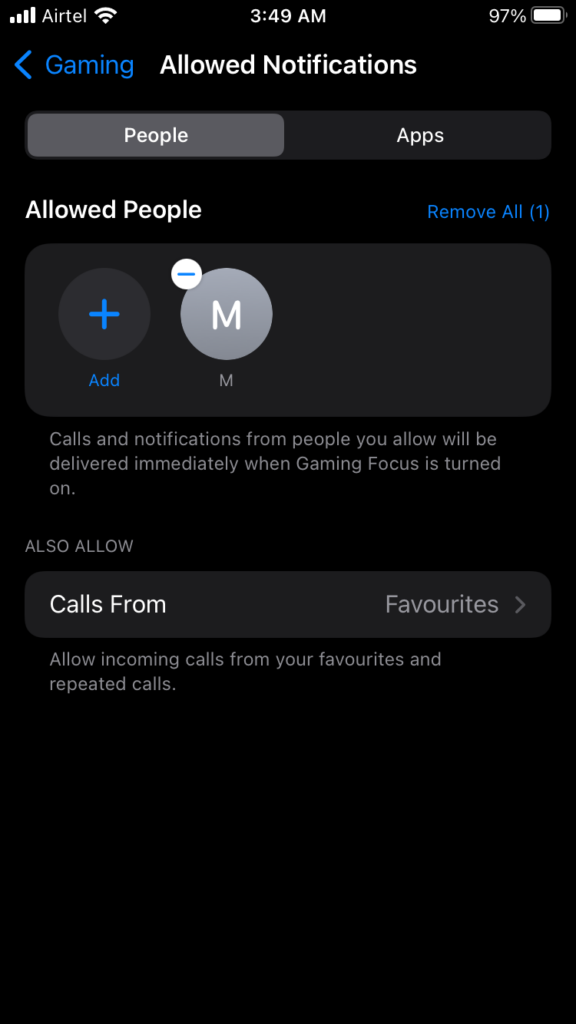 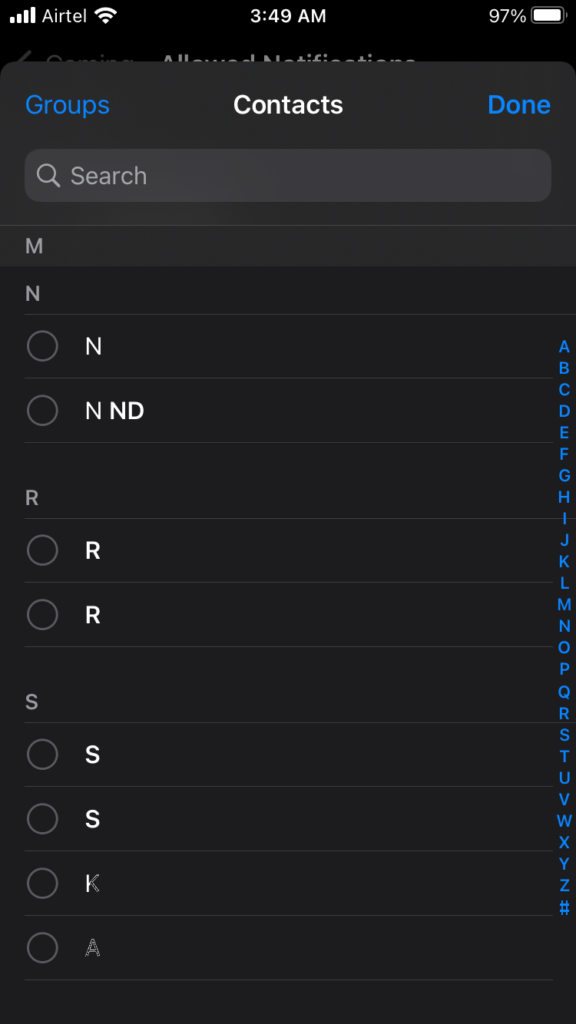 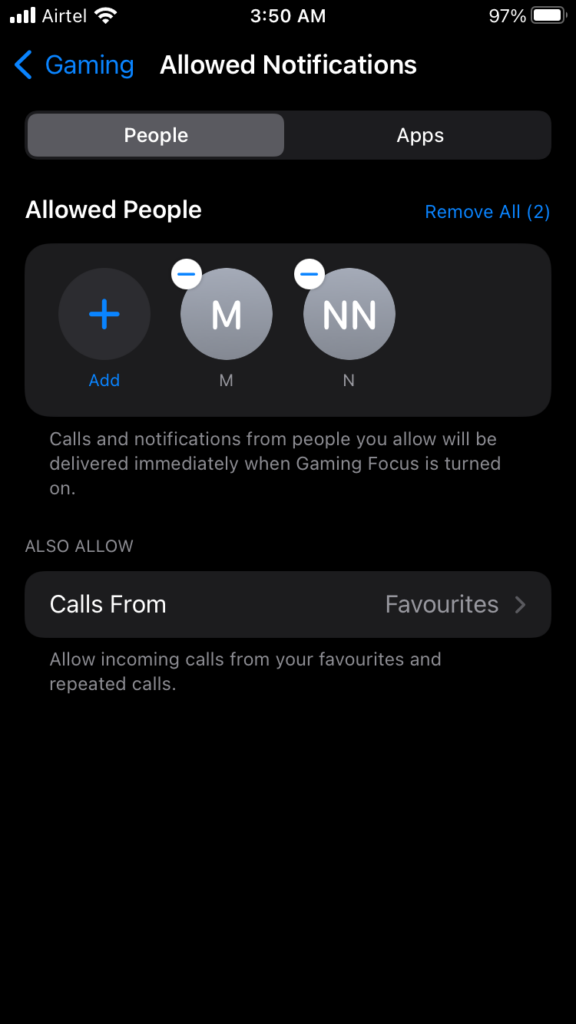 You can add/remove contacts from the list, and the Focus feature will send/stop callers from calling or texting you.

Focus has a set of rules and silences calls from the saved contacts if you didn’t answer them earlier. Enable the feature manually in the Focus settings and allow the selected contacts to call back within three minutes. The iOS software won’t silence the repeated calls, and you won’t miss important information.

4. Tap on the “People” section in the second row.

5. Tap on the “Calls from” option at the bottom. 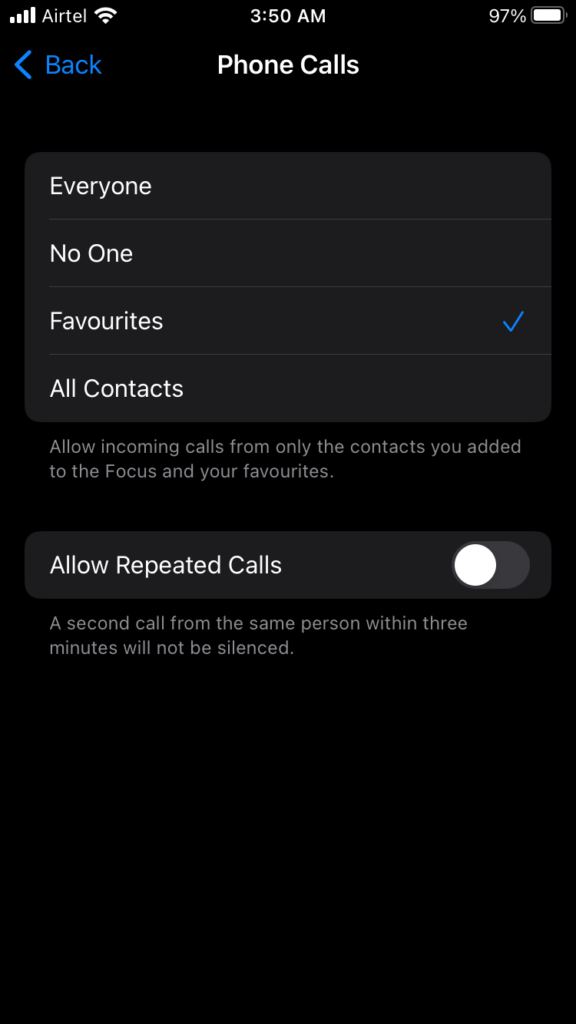 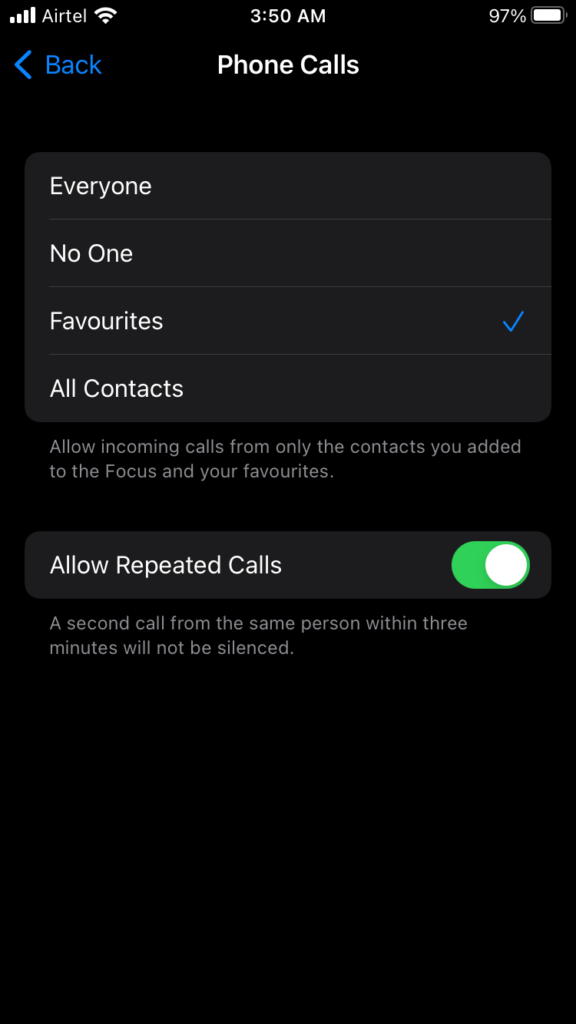 Now, the Focus feature won’t silence repeated calls from the same contact. You don’t have to worry about missing the calls on the first attempt, and the callers can call you again.

It’s not easy to identify an incorrect configuration in the software. I recommend the readers delete the Focus and create a new one from scratch. 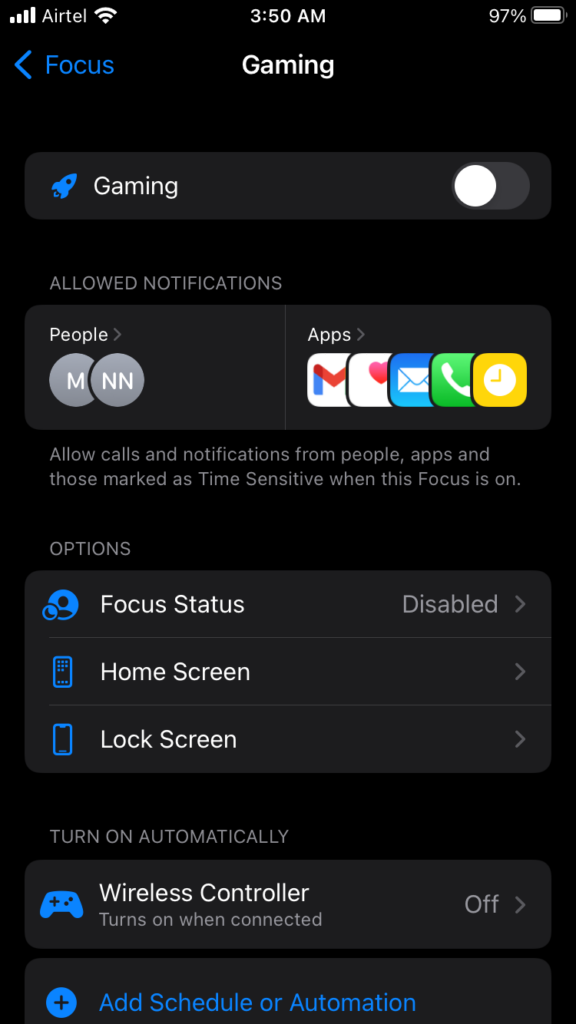 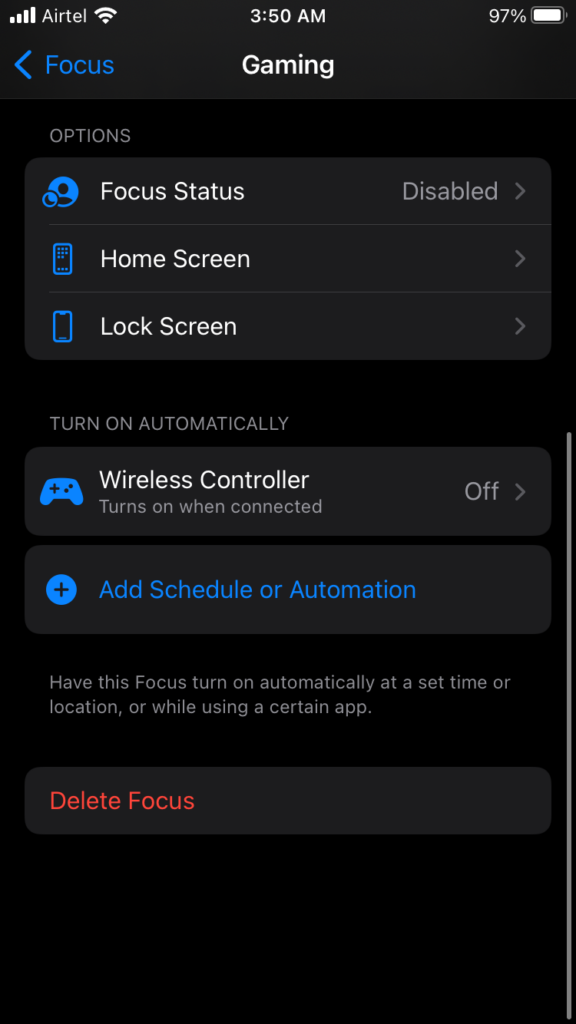 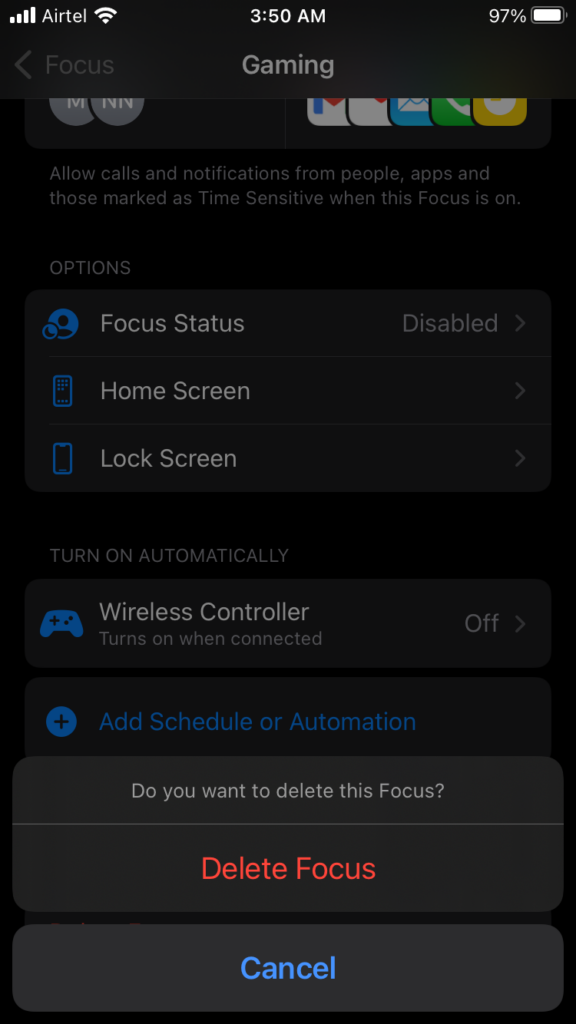 7. Create a new Focus from scratch.

Be careful when selecting the option and avoid making the same mistakes. Move on to the next solution after creating the new Focus list. 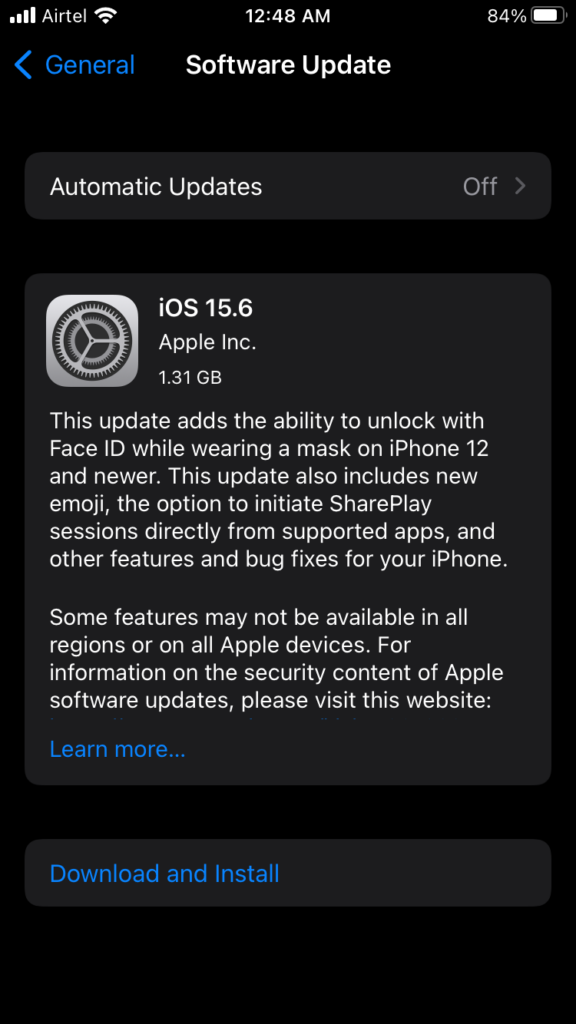 iPhone and iPad have given me a different perceptive on the new software version. My experience saved me in the past, and I want you to follow the same steps.

A. Do not install the latest software update on the first day.

B. Wait for the reviewers, bloggers, and experts to install the update.

D. Read the software update reviews specific to your device.

E. Create a backup in the iCloud and local storage via iTunes.

Now, you are prepared to install the latest iOS and iPadOS software on the device. Read the software update patch notes from the official website and be well-informed.

Reset the iOS/iPadOS software if there are no updates from Apple. Create a data backup using iTunes and iCloud to prevent any data loss. Resetting the settings doesn’t wipe the internal storage and data. But, I want you to take precautions and avoid any regrets later.

2. Tap the “General” from the Settings app.

4. Tap on the “Transfer or Reset iPhone/iPad” option. 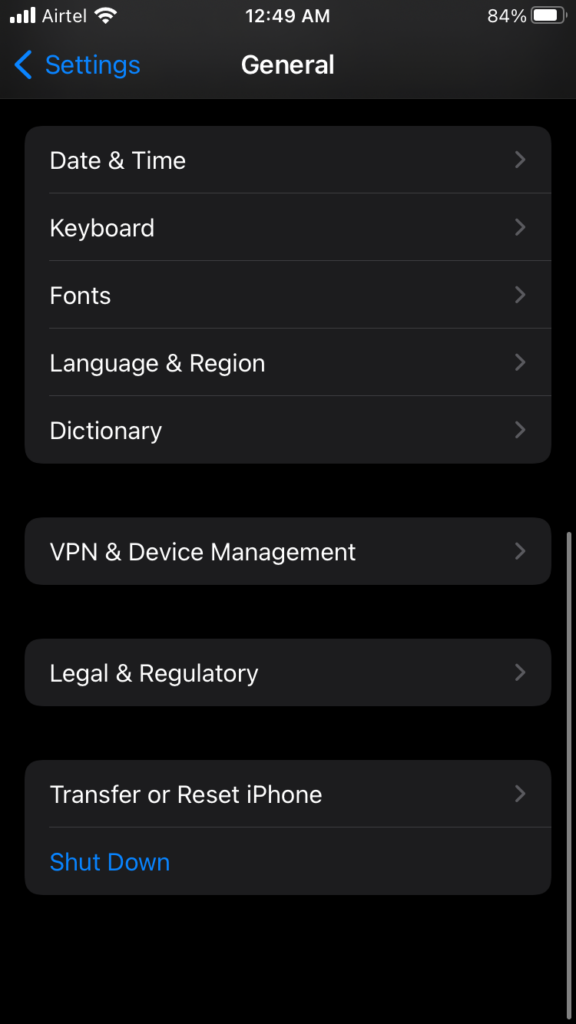 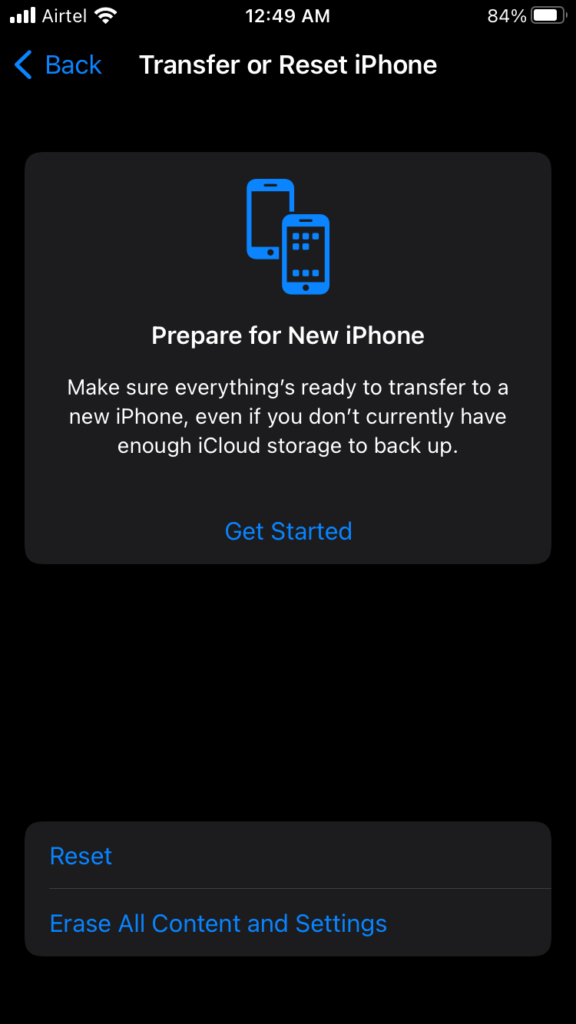 6. Select the “Reset All Settings” option. 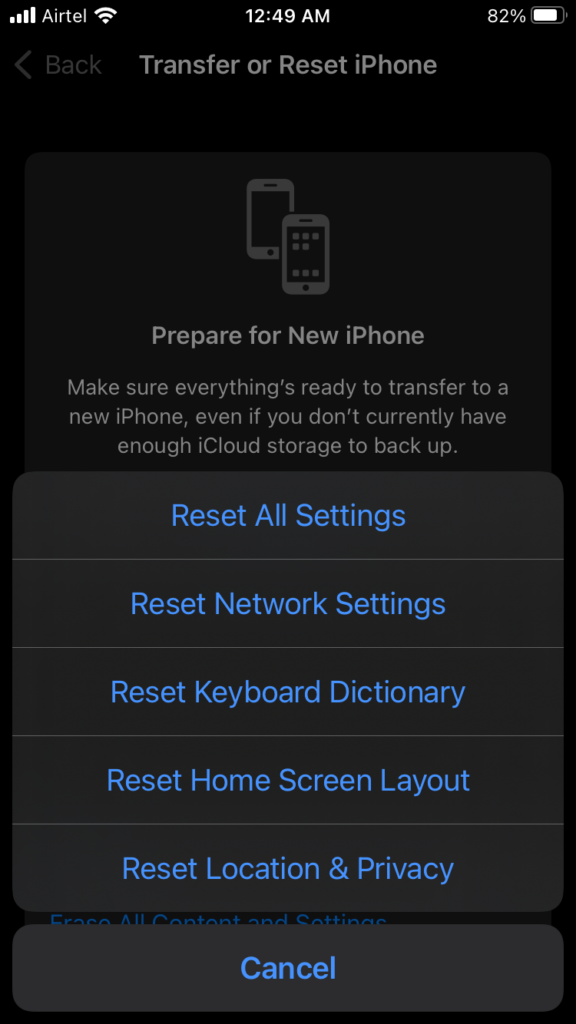 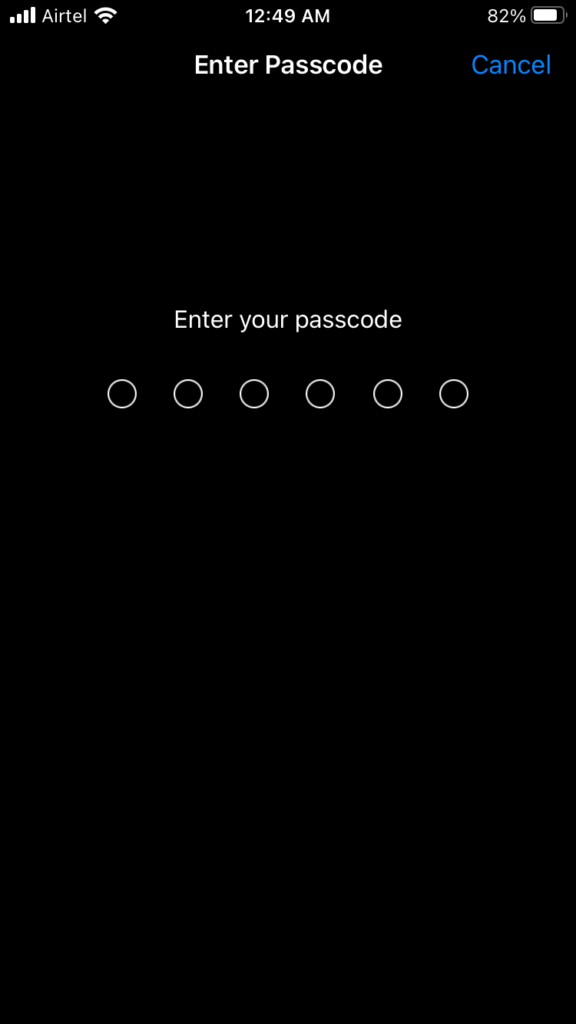 8. Tap on the “Reset All Settings” option. 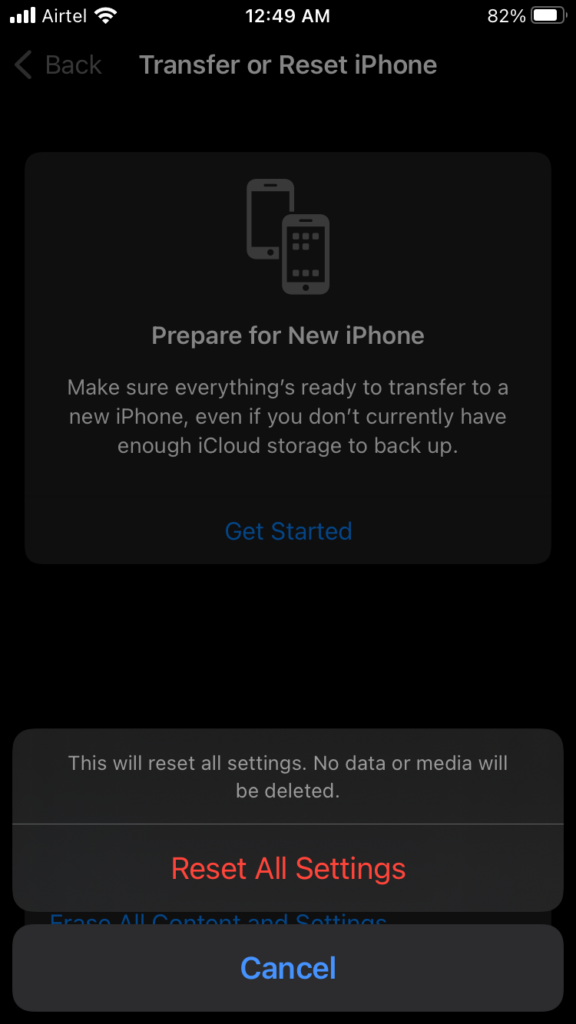 I have shown you how to fix Focus mode not working on iOS 16/iPadOS 16 or later devices. You can contact the Apple customer care and authorized service center for further information. You can solve the Focus problems by following the official solutions. You don’t need a third-party tool to rectify the issue and stay away from them.