HiSense is known for its top-notch products. Over the year, it has gained a lot of popularity. However, in 1969 HiSense launched as a radio maker company, but after a few years of hard work and dedication, they came up as the most valuable brand. After that, they were not only limited to a radio-making company, they launched a wide range of products in the market, such as TV, fridge, dishwasher, air products, etc.

But, there is the fact that we do not involve in a business that we are not familiar with. That’s why their TV segment users are often complaining about some issues they are facing. For example, recently, for some users, the HiSense TV is not turning On, or the power is not working.

Well, personally, I felt very bad for those users, that’s why after research and brainstorming with this particular error, I’ve found some basic and common fixes that will surely help those who are facing the HiSense TV not turning On or power not working issue. So, let’s get started and see those fixes.

HiSense TV Blinking Red Light, What Does That Mean and How to Fix?

How To Clear Cache On Hisense TV

How To Fix If Hisense Smart TV Screen Is Flickering 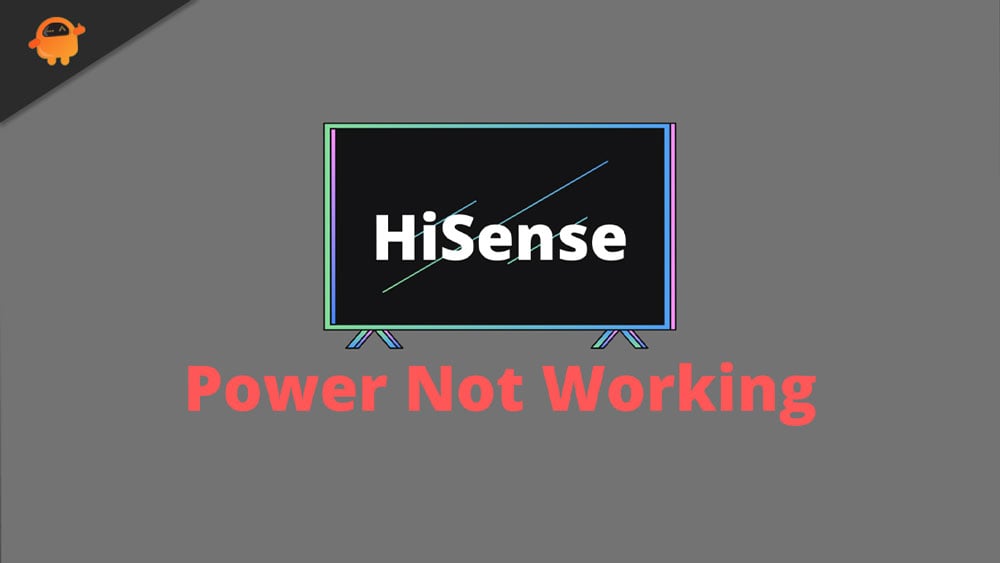 By the end of this guide, you are not familiar with the fixes to fix the HiSense Tv not turning on or power not working issue, but also how to prevent or take precious steps to avoid this kind of issue. Here we have mentioned some of the most valuable fixes that previously helped out users from all around the globe to resolve this kind of issue. Now, without wasting our time, let’s directly jump into the guide:

It is possible that due to some random bugs and glitches, your HiSense TV may not turn on or the power not working. Yeah! I know this is a very annoying issue because generally, non-technical people don’t know about these bugs. But, to remove those bugs, or we say temporary files, you just need to reboot your TV.

Of course, I know that you may already perform this lots of times, but before performing any fixes, we suggest you reboot your TV to make sure you have a fresh new start to working on the error in order to resolve it. So, you can simply reboot your TV and check if it is started working or not.

Hisense TV Screen Flickering or Flashing Light, How to Fix?

If you have rebooted your HiSense TV but still getting the error, then there is a possibility that there is some kind of power interruption with your TV. So yes, chances are there that the power cord may have some damage due to which you are getting this issue.

So, we suggest you first turn off the power button and thoroughly check your TV’s power cord. However, if you notice, replace it with a new one if possible because you have no other option otherwise. In many cases, it is seen that after changing the power cord, the not turning on issue get resolved automatically on the HiSense TV.

Did you check your remote, that whether your remote is working or not? Well, there are huge possibilities that your HiSense TV remote may get damaged due to which it is failed to power on your TV. Therefore, it is highly suggested that you can first check your TV remote’s battery because most of the time, the remote’s battery gets weakened, due to which you are getting this issue.

So, if that’s the case, then simply replace the batteries and check again if it is now able to turn on your TV or not. However, most probably, if the issue is occurring due to a faulty remote, then it will get fixed after this.

Moreover, I’ll also suggest you check your remote thoroughly for damage because if your remote’s internal parts get damaged, then replacing or hard pressing the button won’t help you fix this issue.

Well, in case you are still stuck on the same error, then I have a suggestion for you to try power cycling your TV once and see if it helps. However, to do this, you can simply turn the power switch off and remove all the wires and cords attached to your HiSense TV. After that, wait for about 5 minutes.

Then, plug the cords in and turn on the power switch. Now, check if the TV is not turning on the issue gets resolved or not. I’m sure that this will help you fix the issue because previously, many users reported that after power cycling their devices, this kind of issue automatically gets resolved. Therefore, try this out and let us know if it helps.

However, you can also plug your TV into another power source/outlet and check if it is started working or not. If the TV is turned on without getting an error, then this means the previous source/ outlet that you are using may have some issue. So, you need to fix that source before using it.

If you have still not checked the ports, we suggest you check them immediately as it is possible that the port you are using may have some issues. So, to check them, simply check the power port as well as the HDMI port.

However, if you have an extra cord, then try them. Most of the time, the issue may occur due to bad outlet ports. So, if your ports get damaged, then except hovering over to the nearest service center, you have no other choice and replace them.

Fix: Hisense TV Not Switching On or Off

How to Use Hisense TV Without a Remote

Now, you know why and how to fix if your HiSense TV is not turning on or the power is not working. We hope the methods we have mentioned above have helped you. However, in case you still find no luck fixing this issue, then you can hover over to the service center and appoint a repairing engineer who can repair your TV. For further information, comment below.

Tags: HiSense TV, How to Guide