Motorola Edge (codenamed: racer) launched in April 2020. The handset came with Android 10 Q. On this page, we will guide you to install the unofficial Android 13 Custom ROM on Motorola Edge. If you are someone who wants to install the vanilla version of Android 13, then this guide is for you.

Moto has unveiled its new Edge series; the Motorola Edge is the base device in this series. It comes with a 6.8″ AMOLED display, Snapdragon 765G, 4/6GB RAM, 128GB ROM, quad rear cameras, 4,500mAh battery, and runs on Android 10. 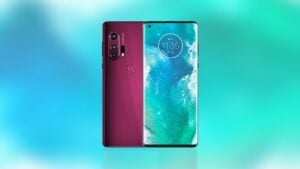 The Motorola Edge features a 6.8 inches AMOLED display with a Full HD+ resolution, and with the trending punch hole to the left of the display. It also has an aspect ratio of 19:5:9, a resolution of 1080 x 2340 pixels, a pixel density of 384 Pixel Per Inch ( PPI ), a screen to body ratio of 95.9 percent, and it has a screen refresh rate of 90Hz.

While talking about the internals, the Motorola Edge sports the Qualcomm Snapdragon 765G, which is built on the 7nm process. This octa-core setup includes one Kryo 475 Prime core clocked at 2.4GHz, one Kryo 475 Gold core clocked at 2.2GHz, and six Kryo 475 silver cores clocked at 1.8GHz. To the GPU side, it sports the Adreno 620 GPU. Talking about the memory side, it comes with 4, and 6GB of RAM. And only with 128GB of UFS 2.1 onboard storage. Further, this is also expandable via the micro SD card, and the device runs on Android 10.

Lenovo owned Moto has included a 4,500 mAh battery on this device. This also come with support for 18W Quick Charge 3.0, and charges over the USB type C port. It is available in two color options, namely the Solar Black and Midnight Magenta. Connectivity options include Wi-Fi 802.11 a/b/g/n/ac, dual-band, Wi-Fi Direct, hotspot. Bluetooth 5.0, A2DP, LE. GPS with A-GPS, GLONASS, GALILEO, BDS, LTEPP, SUPL. And USB 2.0, Type-C 1.0 reversible connector. Sensors on this include accelerometer, gyro, proximity, and compass. Talking about the biometric options available, it comes with an optical in-display fingerprint scanner, and also support for face unlock. It comes with IP54 Splashproof.

How to Install AOSP Android 13 on Motorola Edge (racer)

As the title suggests, we’ve shared the requirements and steps to flash the AOSP Android 13 build on the Motorola Edge (racer) variant.

You can skip this adb and fastboot part if you have already installed TWRP Recovery on your Motorola Edge.

You must first unlock the bootloader on your Motorola Edge to enjoy any custom ROM.

Here, you will find all the Android 13 custom ROM for your Motorola Edge (racer).

Your device will now boot to the newly installed OS. With this, we conclude the guide on installing the AOSP Android 13 on Motorola Edge. Remember that the first boot might take time, and you might have to set up your device from scratch.

Flashing the ported Android 13 on your Motorola Edge will give you an early taste of the latest Android OS version. It looks like the Motorola Edge model won’t officially receive the Android 13 update from the manufacturer. So, it’s a good idea to get most of the features and visual treatment. However, if you find any extra bugs or stability issues, you should report them to the respective forum.