There are many reasons why AMD Setting Radeon Software installation errors 182, 1603, and 195 show up on your screen. Your GPU is the core part of the system, and it is frustrating to have problems with the video card. We should keep the faulty chip in the account, but you should apply software-based solutions. Do not jump to conclusions and declare the operating system culprit. I have compiled a list of viable solutions that will counter AMD GPU software errors. 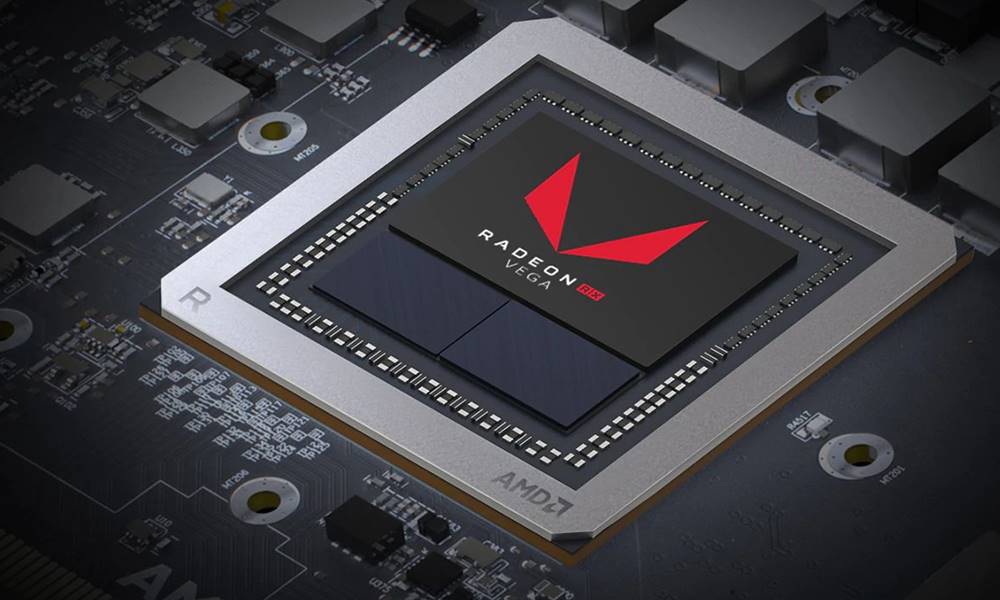 Let me break the AMD GPU errors into parts and give you valid reasons that might ring a bell in your mind.

Error 182: AMD struggled in the past because they had a wide range of unsuccessful product groups. Your laptop/desktop has an unsupported graphics processor, and the latest drivers don’t support it.

Error 1603: The system may have corrupted files. And it could be the reason why AMD Control Panel is not functioning normally.

Error 195: The machine is not connecting with AMD Web Server, and I have shown you how to resolve the issue.

Now, you know the reason behind the AMD GPU error, and that gives you an idea of what’s wrong with the machine. Of course, there are other factors that we have to consider to resolve the error 182, 1603, and 195 problems.

I have shown you multiple solutions to resolve AMD GPU errors, and the first solution is very effective in all cases. Do not skip it and follow the driver’s installation process, which resolves almost every type of AMD graphics software problem.
Download Drivers Manually

The Santa Clara-based semiconductor company is promoting the standalone executable file for every AMD graphics card. An average user would hop on the web page and download the standalone installer, which is the contributing problem for older hardware.

I have an AMD laptop that rocks A4-6210 APU with Radeon R3 Graphics, and the newer drivers don’t work smoothly with the older chipset. Allow me to show how you can download the compatible drivers from the official website.

1. Open the browser and search for your laptop model number or graphics card model number with “drivers” at the end of the term.

2. I searched for the “A4-6210 APU with Radeon R3 Graphics drivers”, and the first result is the official page.

3. Choose the operating system, and it doesn’t support Windows 11, which is a bummer.

You can scroll down to view the previously released drivers that date back to 2020, and it’s a good option for a wide range of desktops/laptops.

I’m using an AMD laptop and desktop for five years. I always had in my mind that AMD should step up and clear the air for everyone. The Control Panel is not good enough to serve the customers, and they need to put more effort to resolve multiple errors.
I’ve been having a problem with AMD Radeon Software for the past few days, and I got rid of it after applying multiple solutions. I will show you how you should reinstall the GPU drivers in Windows 11, and you can follow the same for the previous operating system edition.

I believe you downloaded the AMD GPU drivers from the official site, and you can follow the above tutorial.

Download the Display Driver Uninstaller (DDU) compressed file from the official website. Scroll down, and you will find download locations such as Netherlands, Germany, West Coast (USA), and East Coast (USA).

Note: Remove the LAN cable or disable the Wi-Fi network in the machine.

Follow my lead to boot the Windows into safe mode.

1. Restart Windows PC while holding the SHIFT key on the keyboard. 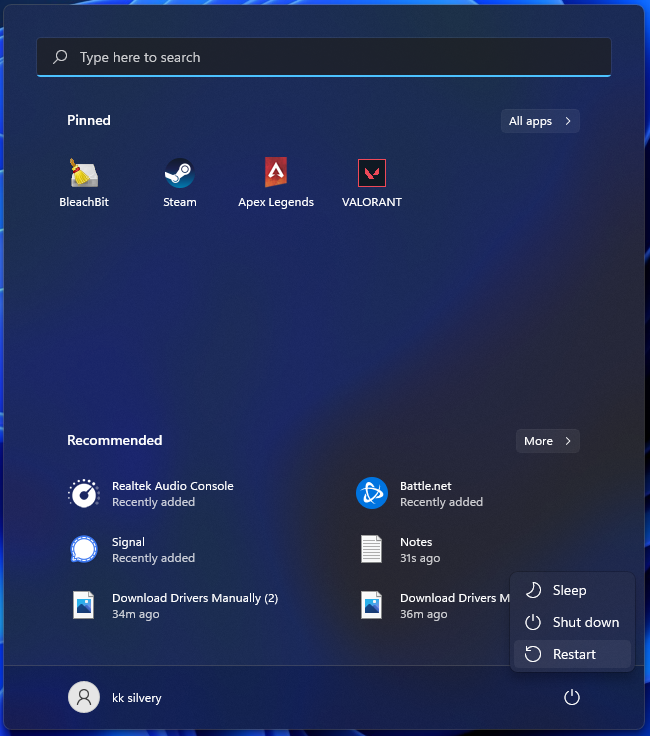 Wait for the operating system to bring up the Recovery Options on the screen. 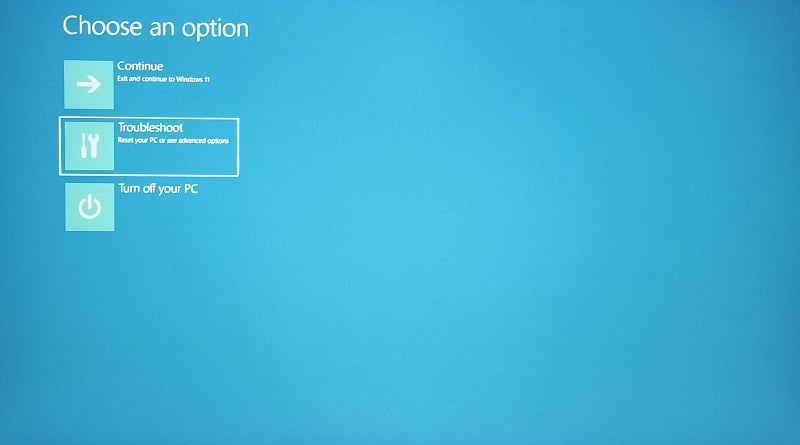 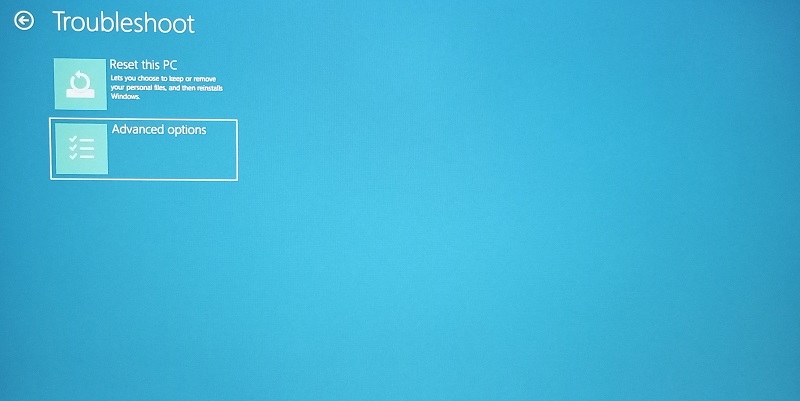 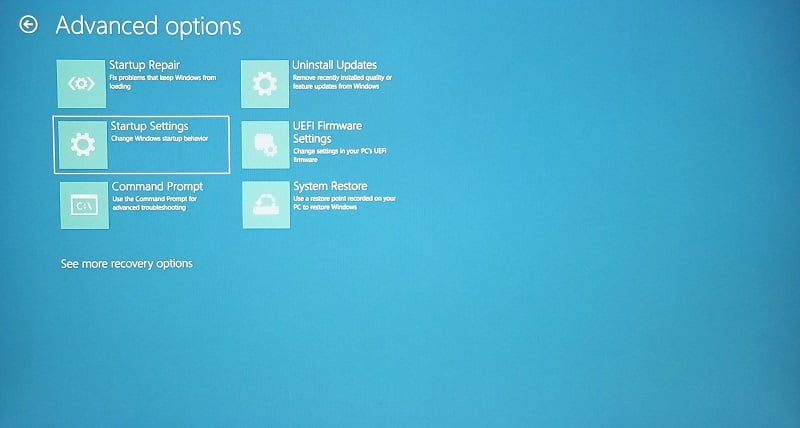 5. Click on the “Restart” button or press the “Enter” key on the keyboard.

6. Press the 4 key, and you should do it from the numerical keys located on the top of the board. 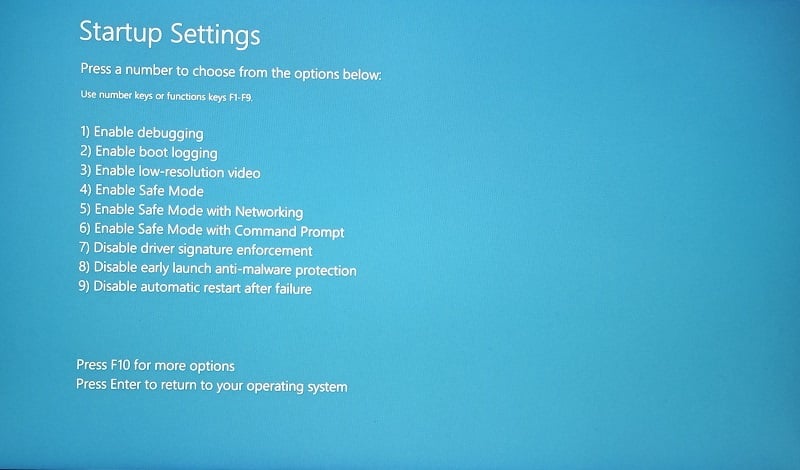 Windows will load the Safe Mode and you have login into the machine using Hello or PIN code.

This is an important part of the tutorial, and you should entirely drop the driver re-installation process if you skip the DDU process. 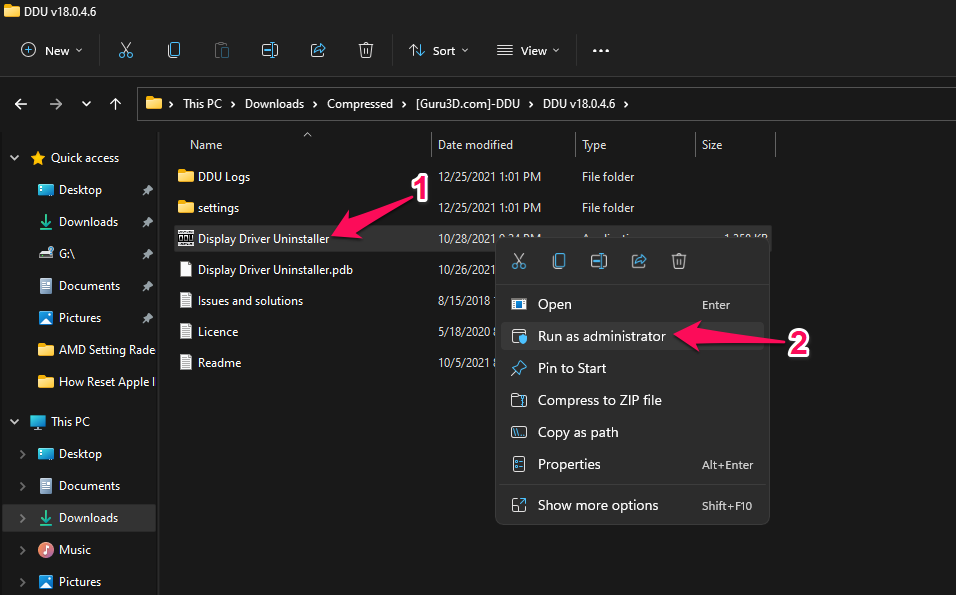 3. Select the device type and choose “GPU” from the drop-down menu. 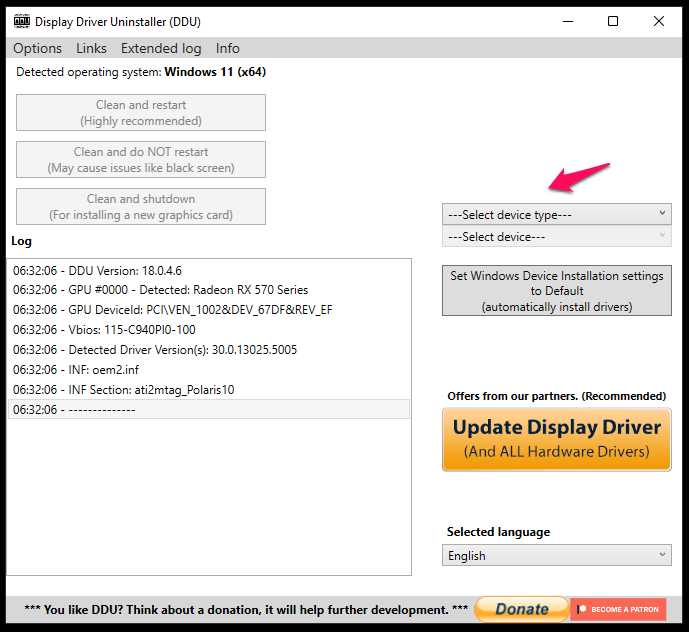 4. Choose the GPU vendor, and it is AMD in our case. 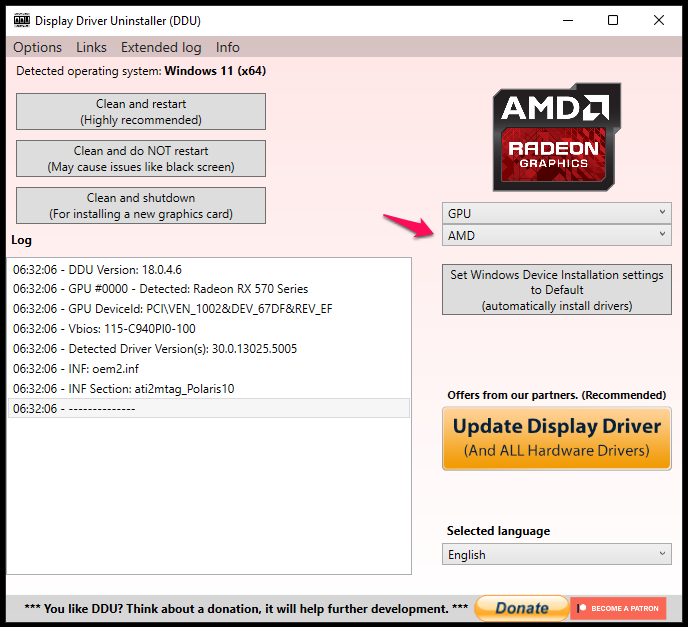 Note: The program automatically detects the graphics card in the system, but you can choose the vendor manually. 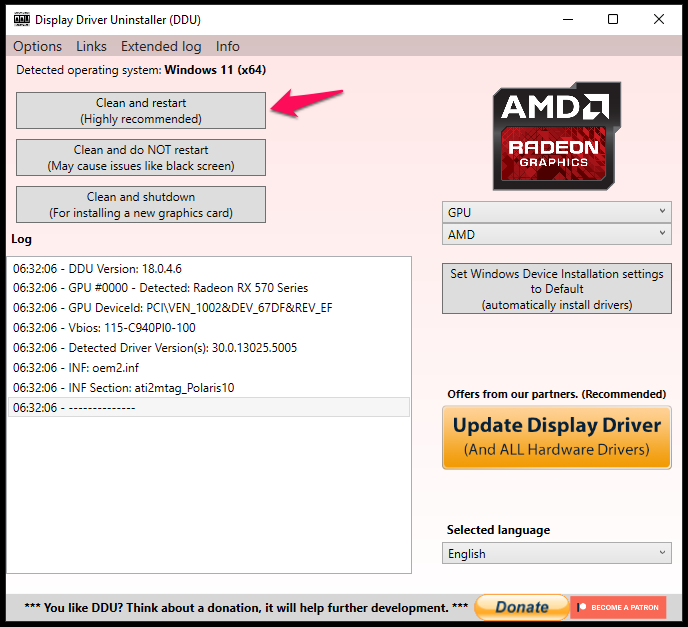 The DDU will begin unloading all drivers in the system, and you have to sit tight for the machine to restart back into the Lock Screen. You are not in Safe Mode anymore, and it will boot up the operating system normally.

I will show you an option that will factory reset the existing driver, not that you need it, but it’s present in the setup wizard.

1. Run the drivers as administrators. 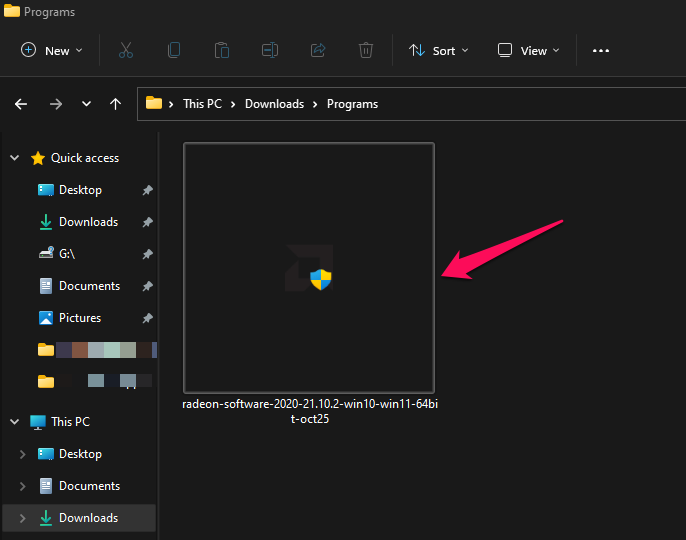 2. I created a folder on the desktop to save the setup contents and click on the “Install” button. 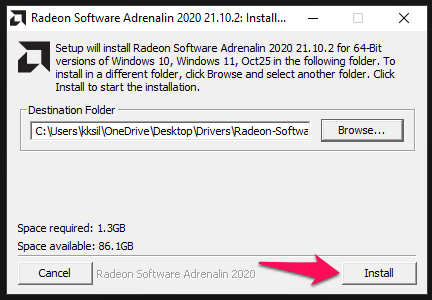 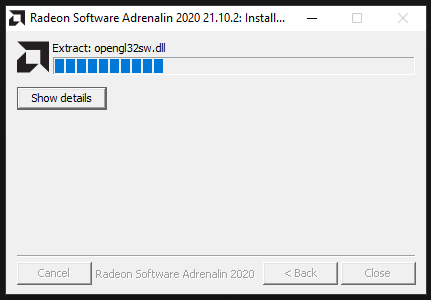 4. Let the auto-wizard load the components. 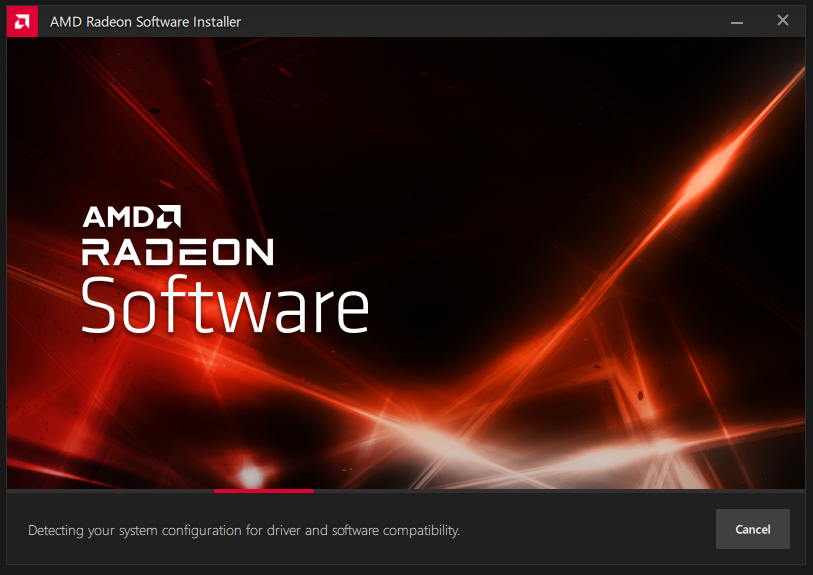 5. You have an option here that allows you to “Factory Reset” the drivers. 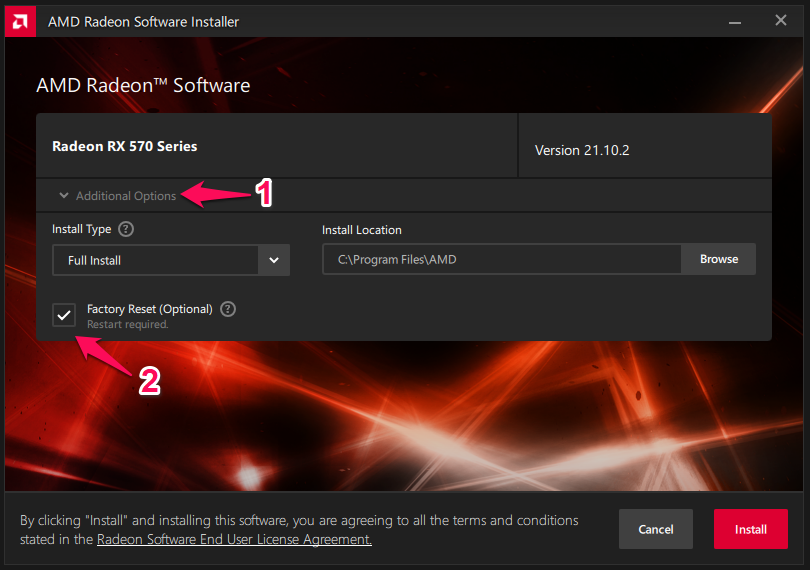 Note: This is an option for those who have skipped the DDU tutorial, but it’s not effective as DDU.

6. Let the auto-wizard install the components. 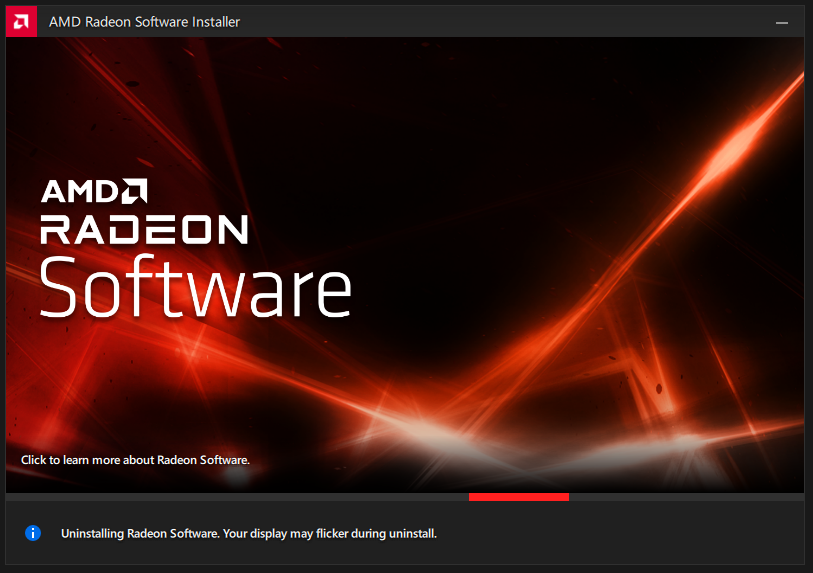 7. Click on “Restart” to Factory Reset the existing driver. 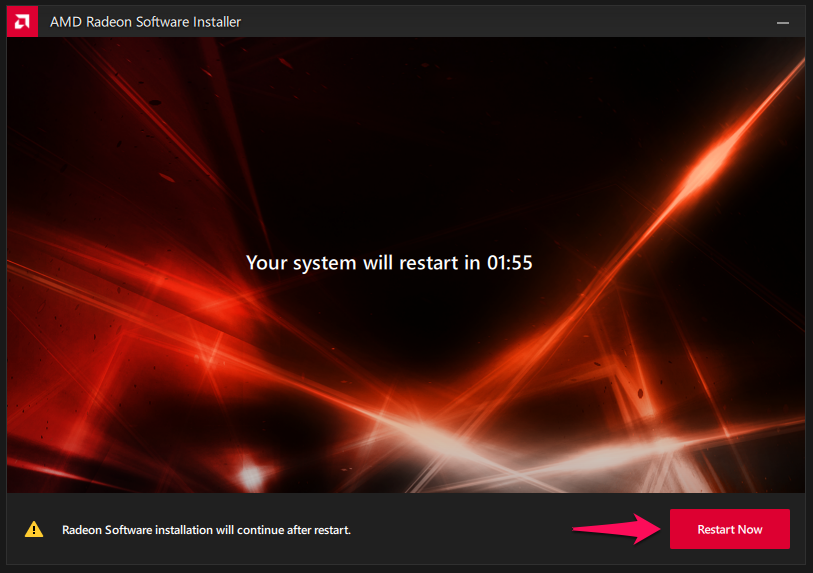 8. Your PC will load the auto-wizard in the next boot-up. 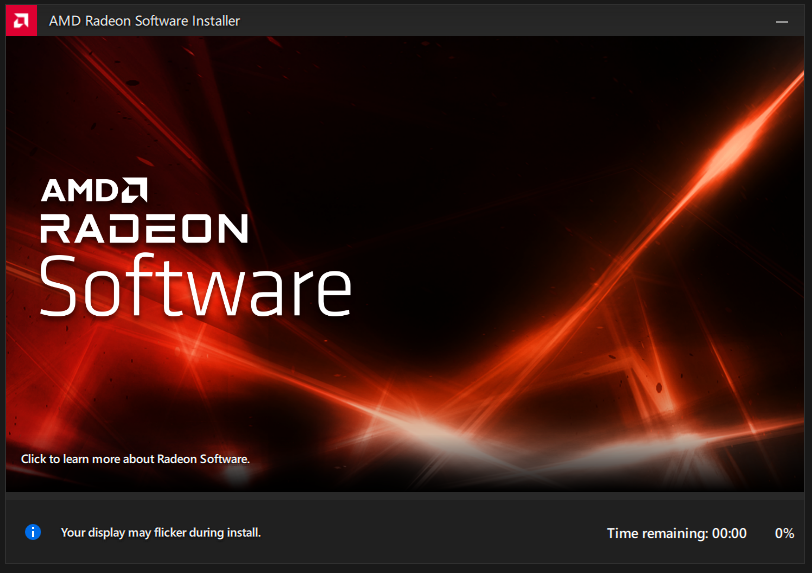 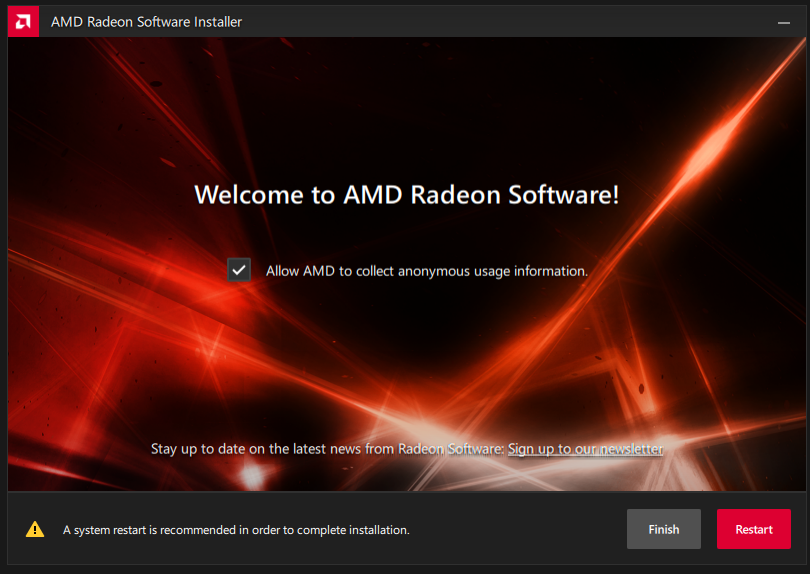 AMD Radeon Software is installed in the machine, and you have got rid of the old drivers from the system. Display Driver Uninstaller removes the old driver fragments and allows you to install the drivers without the risk of software conflicts. 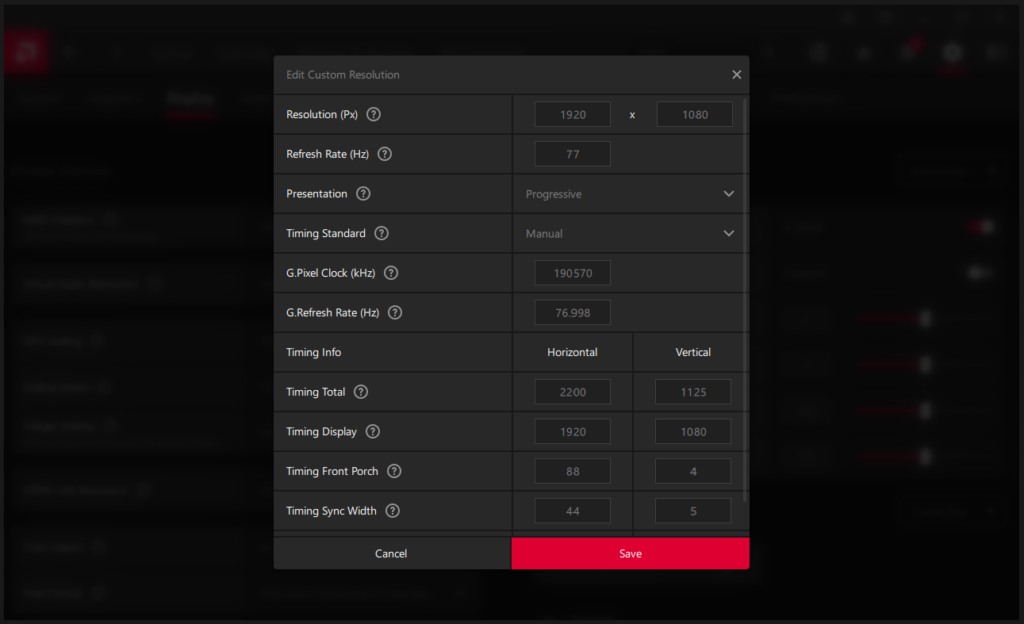 It might sound a bit weird for the non-tech savvy individuals that I overclock 60Hz monitors. Most of the 60Hz panels can indeed overclock up to 75Hz refresh rate. Right now, I have overclocked the monitor’s 77Hz refresh rate, and it’s been the same for almost thirteen months.
Don’t overclock the monitor for a while and go back to 59Hz or 60Hz for the time being. Users should keep the stock clock speeds. So you don’t encounter further problems with AMD Radeon Software. 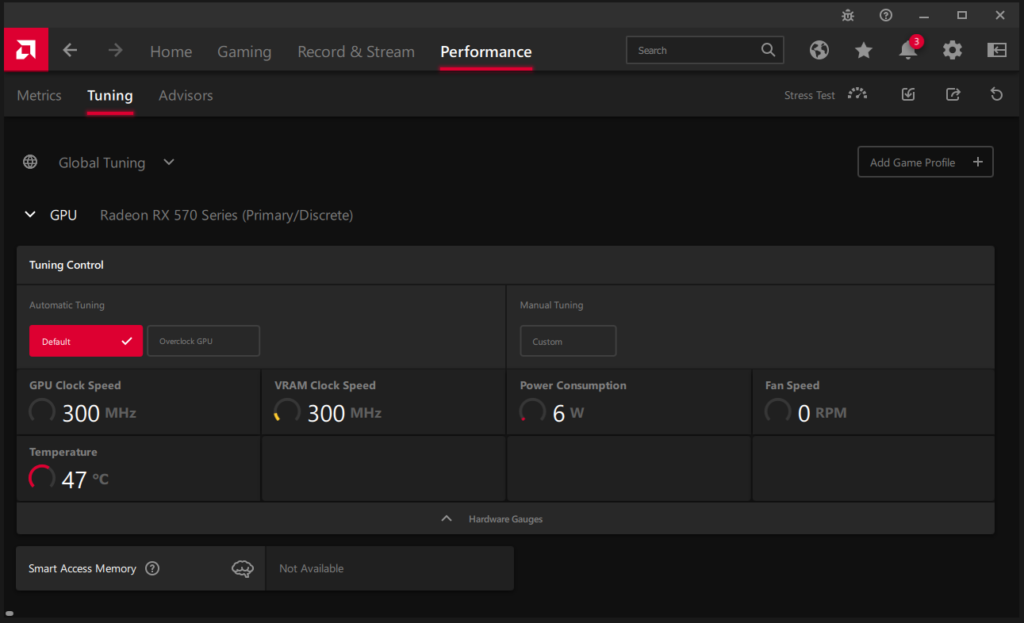 It’s a common practice to overclock graphics cards for extra performance, and it is debatable whether it’s worth the risk or not. However, I suggest the readers hold the horses and go back to stock clock speeds. Overclocking the GPU comes with certain risks that we cannot avoid any further, and you should maintain the stock base clock and boost clock speeds for the time being. Revert the settings in MSI Afterburner and AMD auto-overclock panel.

Microsoft has messed up the updates in the past, and it could be a valid reason why AMD set the Radeon Software installation error 1603 error on the screen. Let us install the critical updates in the Windows 11 machine.

1. Press Windows Key and me concurrently. 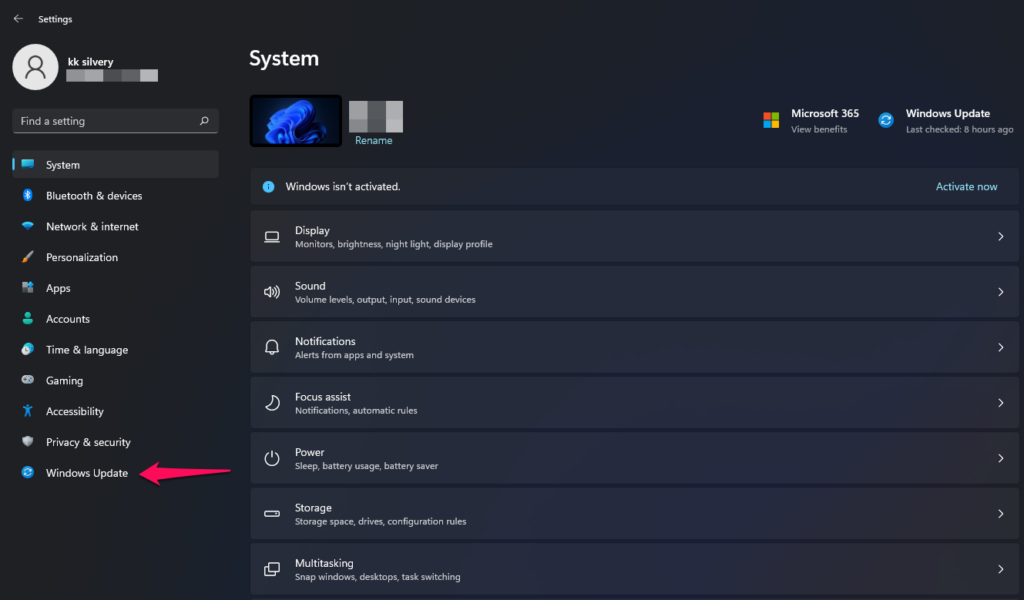 3. Click on “Check updates” to search for the new updates.

4. You can check out the “Update History” and find out if there are any failed attempts in the list. 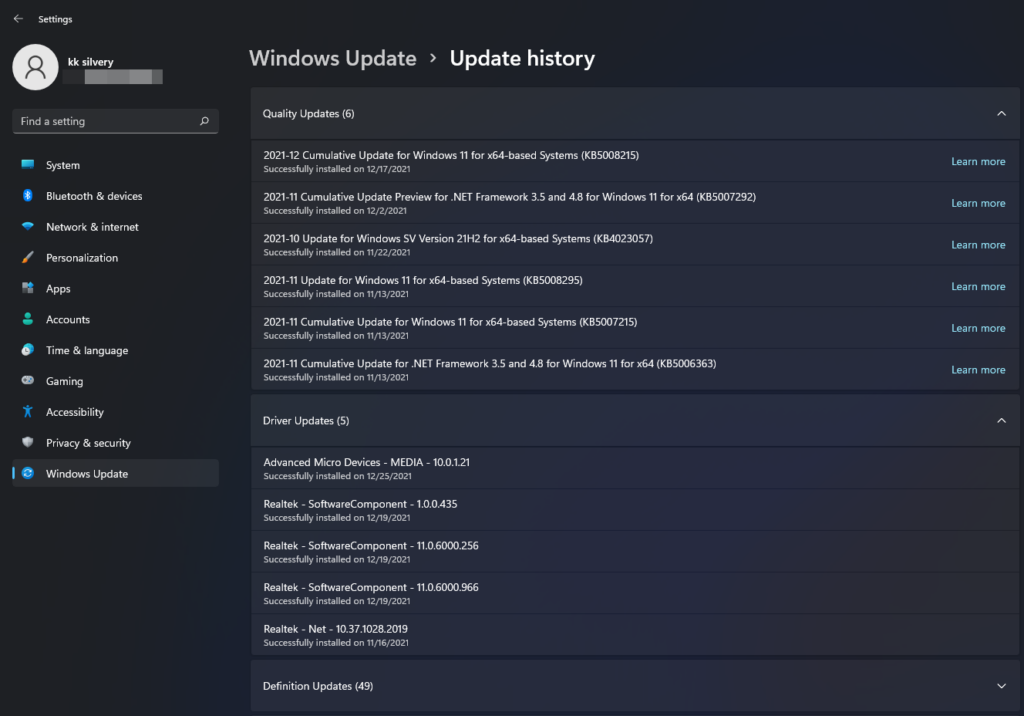 You shouldn’t skip the latest updates coming from Microsoft in the first year since it will make Windows 11 stable. You should install newer drivers updates manually because we don’t know which driver is not stable for the current build version. 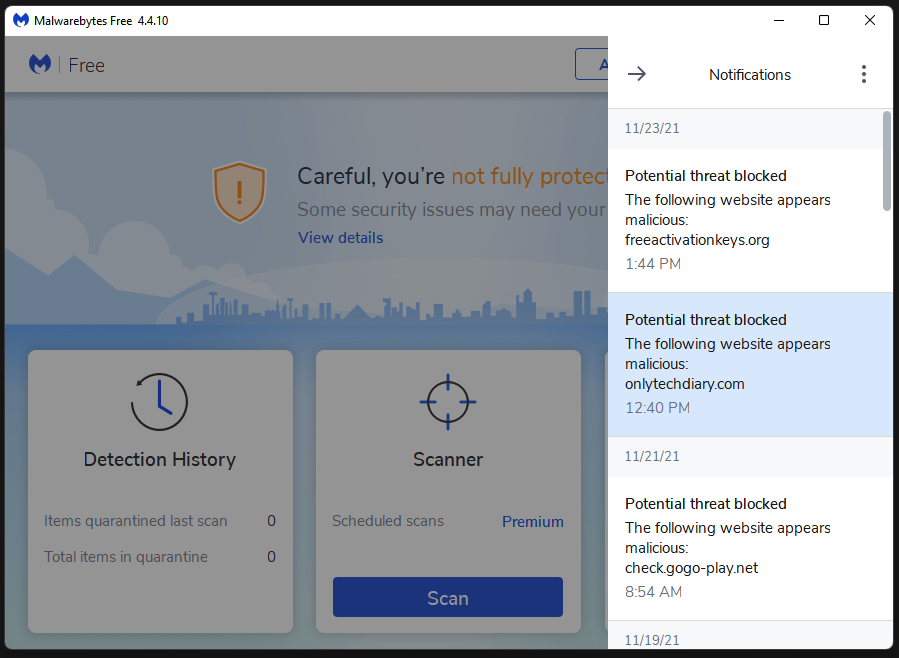 Of course, the antivirus system might have detected the AMD web server as a threat. You can access the dashboard to set the webserver function as false positive, so it won’t block the connection in the Windows 11 PC.

We cannot sideline Windows Security if we are talking about an antivirus solution. 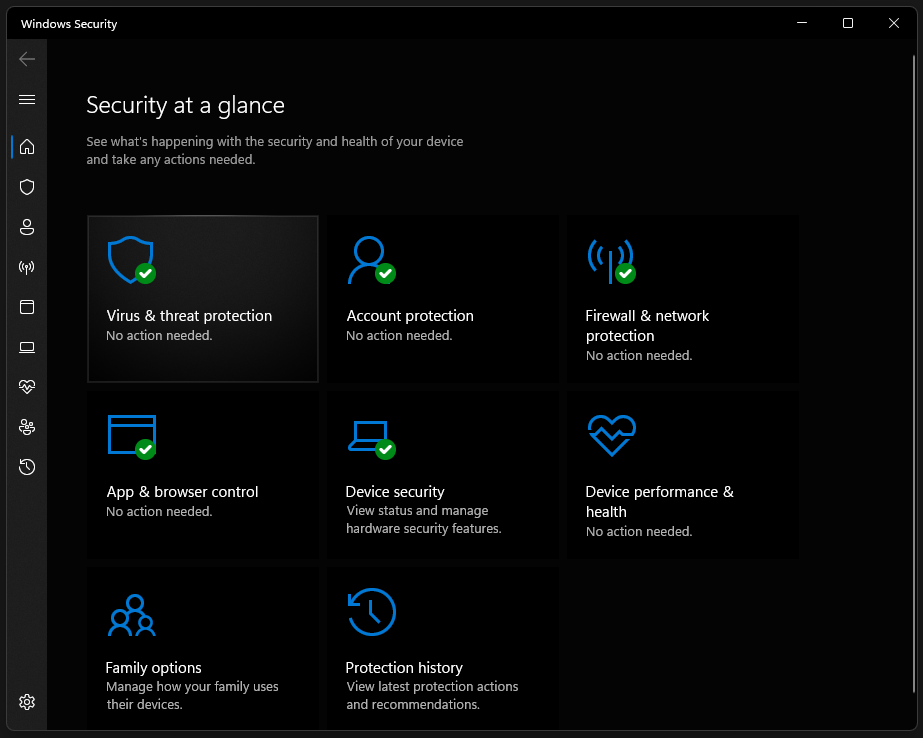 I’m against the idea of disabling security solutions, including third-party protection tools. However, it’s a viable method to resolve AMD GPU error 195 in Windows 11 machines.

Oh boy, I faced a similar problem a couple of months ago, and I had to reinstall Windows 11 from scratch. It’s not easy to fix corrupted Microsoft Visual C++ Redistributable files in the machine, and we don’t know what caused the files to break in the first place. The most viable approach would be reinstalling the Windows OS but you can give the solution a try, then reconsider my suggestion.

1. Uninstall the Microsoft Visual C++ Redistributable packages from the system. 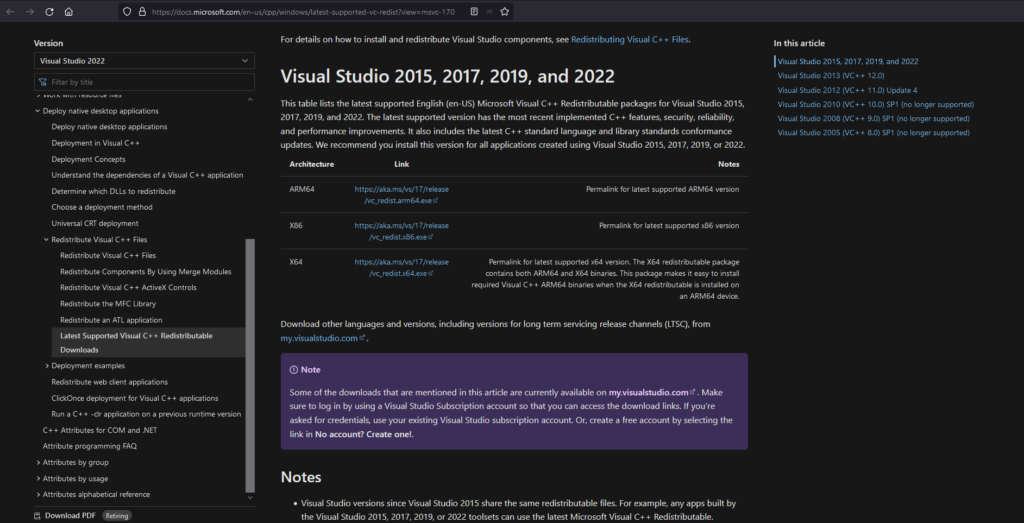 4. Run the Visual C++ Redistributable package as administrator, then click on “Next” to continue. 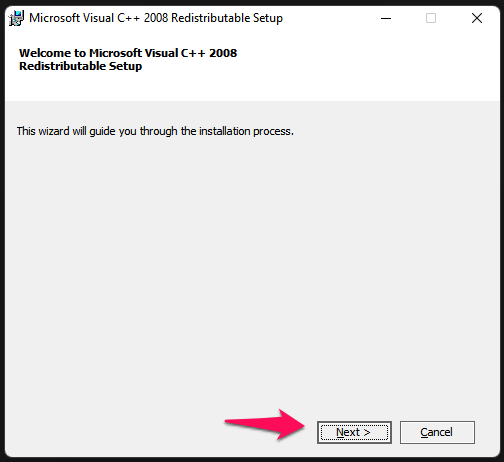 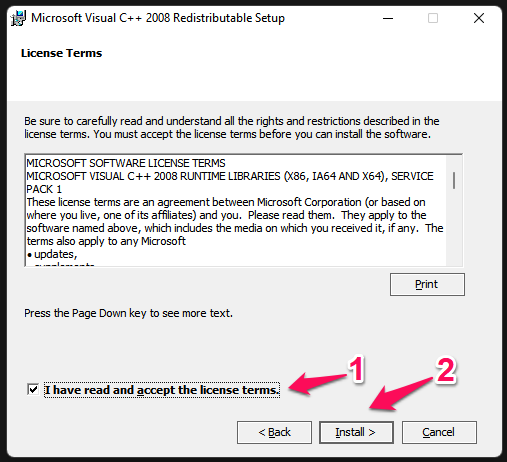 6. Wait for the auto-wizard to install the package. 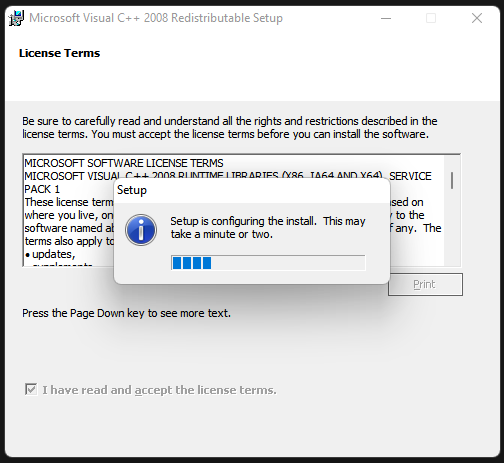 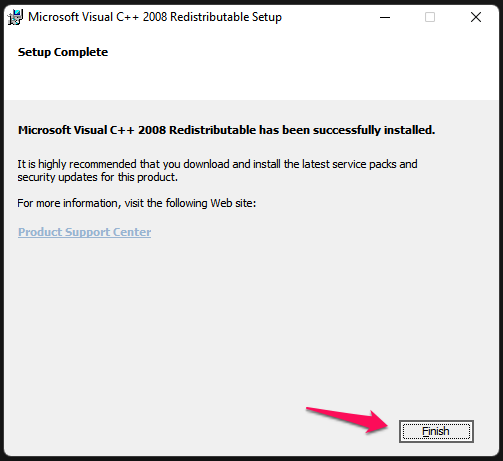 Everything went smoothly on my end because my Windows copy doesn’t have any problems. I don’t think the transition will be the same in your case, and I recommend you consider reinstalling the Windows OS.

Most of the Windows errors go away upon reinstalling the operating system, and we don’t know what part of the system is corrupted. The registry keys might be corrupted and it’s a difficult process to resolve the issue. Tell us which solution resolved AMD Setting Radeon Software installation errors 182, 1603, and 195 issues in the comment section below.