OnePlus 6 and OnePlus 6T (codenamed: enchilada/fajita) launched in May/October 2018. The phone came out of the box with Android 8.1 Oreo and Android 9.0 Pie respectively. On this page, we will guide you to install the unofficial Android 13 Custom ROM on OnePlus 6/6T. If you are someone who wants to install the vanilla version of Android 13, then this guide is for you.

OnePlus got a lot of attention back in 2018 when they first tie-up with the world’s one of the fastest supercar manufacturers company McLaren and launch the OnePlus 6T McLaren edition. Every year, OnePlus ties up with different companies to provide the best material to their users. 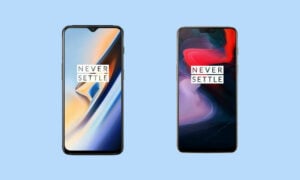 As we know OnePlus 6 series come with Android 9 out of the box and currently running on Android 10 OxygenOS 10.3.12. So, now it is mid-way whether OnePlus provides the latest version or the Android 11. So, that is only confirmed when we look at its features.

Now, talking about the features, all three devices come with the Qualcomm Snapdragon 845 Octa-Core processor. Although these devices are somehow identical in specs, still the price difference is too high. Anyway, if we move towards the storage and RAM from the processor, in 6 you will get 6GB/64GB option. In 6T, you’ll get 6GB/128GB option. But, in the Mclaren edition, you’ll get a 12GB/256GB storage option.

However, it is pretty disappointing in the power segment as the OnePlus 6 features a 3300mAh battery. While 6T and 6T McLaren features a 3700mAh battery with a 30W charger.

As per the specification, it looks decent and can easily handle the Android 12 OxygenOS 12 update. So, it might be possible that OnePlus may look forward to this and soon announce something related to the update.

As the title suggests, we’ve shared the requirements and steps to flash the AOSP Android 13 build on the OnePlus 6/6T (enchilada/fajita) variant.

You can skip this adb and fastboot part if you have already installed TWRP Recovery on your OnePlus 6/6T.

It’s also worth mentioning that mobile devices and other external devices can use and run USB Drivers on a Windows computer. Such as a mouse, keyboard, printer, external hard drives, speakers, USB flash drives, etc. You can grab OnePlus USB Drivers here.

You must first Unlock Bootloader On OnePlus 6 and OnePlus 6T to enjoy any custom ROM.

Here, you will find all the Android 13 custom ROM for your OnePlus 6/6T (enchilada/fajita).

Your device will now boot to the newly installed OS. With this, we conclude the guide on installing the AOSP Android 13 on OnePlus 6/6T. Remember that the first boot might take time, and you might have to set up your device from scratch.

Flashing the ported Android 13 on your OnePlus 6/6T will give you an early taste of the latest Android OS version. It looks like the OnePlus 6/6T model won’t officially receive the Android 13 update from the manufacturer. So, it’s a good idea to get most of the features and visual treatment. However, if you find any extra bugs or stability issues, you should report them to the respective forum.