LG G8 ThinQ (codenamed: Betalm) launched in February 2019. The handset came with Android 9.0 Pie and was later upgraded to Android 10 Q. On this page, we will guide you to install the unofficial Android 13 Custom ROM on LG G8 ThinQ. If you are someone who wants to install the vanilla version of Android 13, then this guide is for you.

Interact with this LG G8 ThinQ with Alexa Hands-Free using touchless commands. Simply say “Alexa” to play music, hear the news or check the weather wherever you are. Just ask- and Alexa will respond instantly. 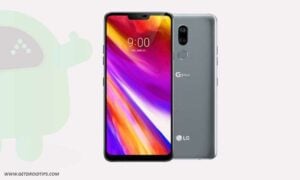 LG G8 ThinQ is based on Android 9.0 and packs 128GB of inbuilt storage that can be expanded via microSD card (up to 2000GB). The LG G8 ThinQ is a dual-SIM (GSM and GSM) mobile that accepts Nano-SIM and Nano-SIM cards. The LG G8 ThinQ measures 151.90 x 71.80 x 8.40mm (height x width x thickness) and weighs 167.00 grams. It was launched in Carmine Red, New Aurora Black, and New Moroccan Blue colours. It features an IP68 rating for dust and water protection.

How to Install AOSP Android 13 on LG G8 ThinQ (Betalm)

As the title suggests, we’ve shared the requirements and steps to flash the AOSP Android 13 build on the LG G8 ThinQ (Betalm) variant.

You can skip this adb and fastboot part if you have already installed TWRP Recovery on your LG G8 ThinQ.

It’s also worth mentioning that mobile devices and other external devices can use and run USB Drivers on a Windows computer. Such as a mouse, keyboard, printer, external hard drives, speakers, USB flash drives, etc. You can grab LG USB Drivers here.

You must first unlock the bootloader on your LG G8 ThinQ to enjoy any custom ROM.

Here, you will find all the Android 13 custom ROM for your LG G8 ThinQ (Betalm).

Your device will now boot to the newly installed OS. With this, we conclude the guide on installing the AOSP Android 13 on LG G8 ThinQ. Remember that the first boot might take time, and you might have to set up your device from scratch.

Flashing the ported Android 13 on your LG G8 ThinQ will give you an early taste of the latest Android OS version. It looks like the LG G8 ThinQ model won’t officially receive the Android 13 update from the manufacturer. So, it’s a good idea to get most of the features and visual treatment. However, if you find any extra bugs or stability issues, you should report them to the respective forum.