As we talk of weapons in Elden Ring, there are more than enough to look into. Interestingly, compared to other RPGs, Elden Ring brings weapons that wield absolutely unique concepts and powers. Who could have thought about swords that are entirely built of light or clubs that are as huge as a house itself? But all these overpowered weapons eventually fit into the questline as you will be up against enormous bosses with insane attacking powers and range.

With that said, going on head-to-head battles with such enemies with a tiny dagger must look suicidal. Of course, these daggers are nowhere near the other overwhelming weapons when it comes to power and strength. But here’s the catch, daggers in Elden Ring also hold specific powers that can be made to great use if used properly by a skilful player.

First of all, being small in size, they assure faster attacks within a minimum range. Moreover, daggers are brutal weapons in Elden Ring that deals great damage to enemies and also features astonishing weapon arts. So, if you have got a thing for the variety of daggers, you would definitely love to check out this list of the best daggers in Elden Ring. 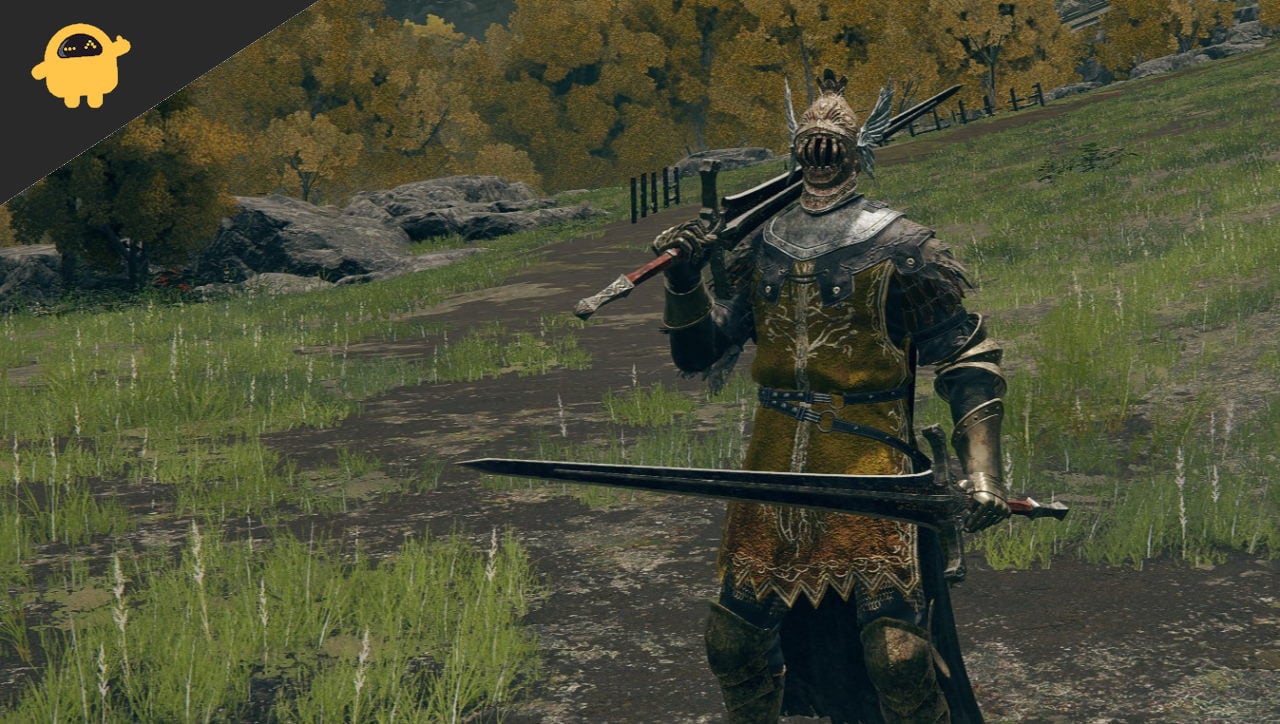 Daggers are often overlooked by the players since they have enough variety of weapons to choose from. Besides, there are a lot of weapons with significant powers that will never let you think of wielding a dagger again. But when it comes to short-ranged attacks, daggers can be of immense use. Moreover, they allow you to develop the best combat skills as you fight stronger enemies in the game. So, here are the best daggers in Elden Ring that you might love to check out. 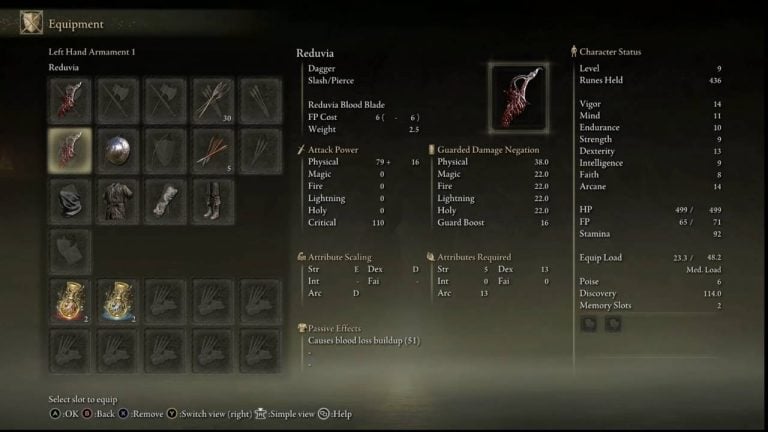 Reduvia is one of those you can access pretty early in Elden Ring. This bleed dagger is basically a dex-arcane scaling weapon meaning it scales off of dexterity and Arcane. Its special ability lets its builds bleed the fastest of all daggers.

Reduvia also has unique ash of war that enables you to shoot a puddle of blood at the enemy. This ability is referred to as the Redubia Bloodblade weapon art that deals heavy damage to enemies. Besides, you can use this art multiple times in quick succession making it a formidable one.

You can get your hands on the Reduvia after defeating the invaders in Limgrave. As you reach the ‘Agheel Lake North’ of  Grace, you need to keep advancing patiently. At some point, you will be invaded on your way. These invaders will drop the Reduvia dagger as well. So, once you take them all out, this dagger will be yours then. 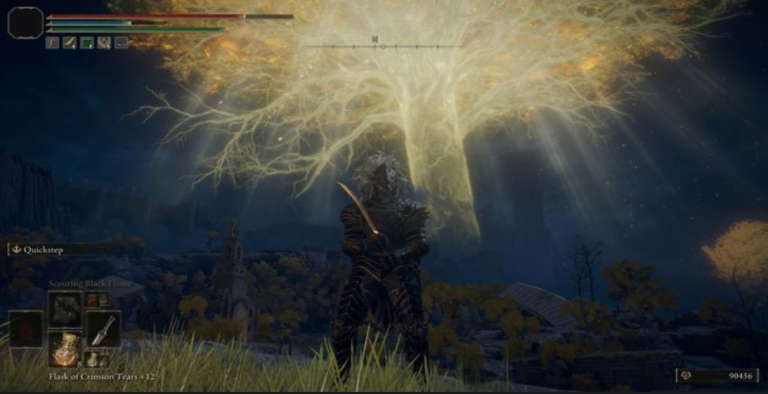 However, it deals relatively greater damage to enemies than any other dagger. More importantly, it allows you to customize it by letting you change the ash of war of this weapon. By default, the Bloodstained Dagger comes with the Quick-step skill. But you can also add other weapon arts like blood blade, bloodhounds, etc.

Although this one is very basic in its appearance, it is indeed one of the rare drops from the demi-humans. Yet you can look out for it in the Weeping Peninsula ‘South of the Lookout tower’ grace. 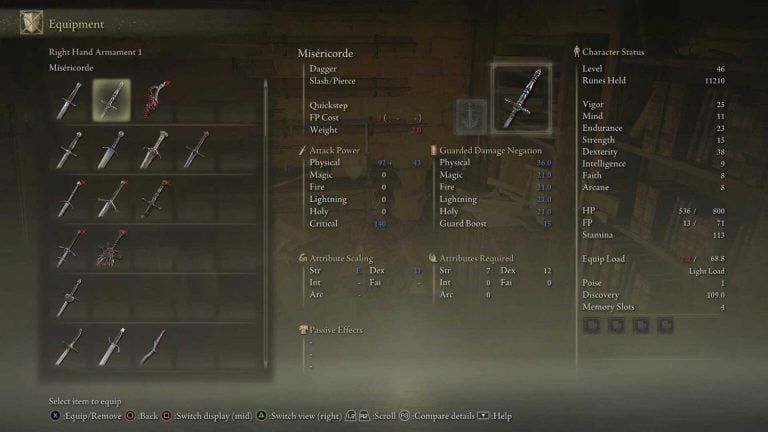 Looking at the skills of the other daggers, Misericorde might not seem to be great enough in terms of its skills. And that is all right. Misericorde comes with the basic Quick-step weapon art. Apart from that, it neither displays any special skills nor anything outstanding about its appearance. But the one thing Misericorde excels in is its high critical rating.

If you do a critical attack with Misericorde, you gain a 140% bonus damage. These numbers are so huge that no other dagger in Elden Ring comes even close to it when it concerns the critical hit rating. Other than this, you can also do some basic customizations with the weapon art. So, if you rely on dexterity build, the Misericorde is the best weapon to have without any doubt. 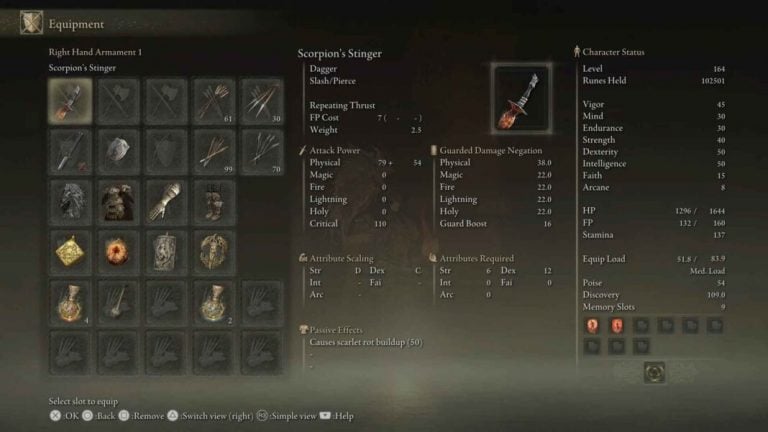 Scorpion’s Stinger is a simple dagger wielded with a super version of a poison known as Scarlet rot. This is what makes the dagger so vicious that deals massive damage to the enemies. On top of that, not only the regular enemies but also bosses get terrifying damage after being attacked by it. Additionally, it also provides you with some great damage and decent dexterity scaling properties as well.

If all that is still not enough, you can add the Kindred of Rot’s Exultation to simply increase its damaging capabilities. To put it simply, it is a decent-looking killing machine with venomous properties. The Scorpion’s Stinger dagger can be found in the temple at Grand Cloister grace. 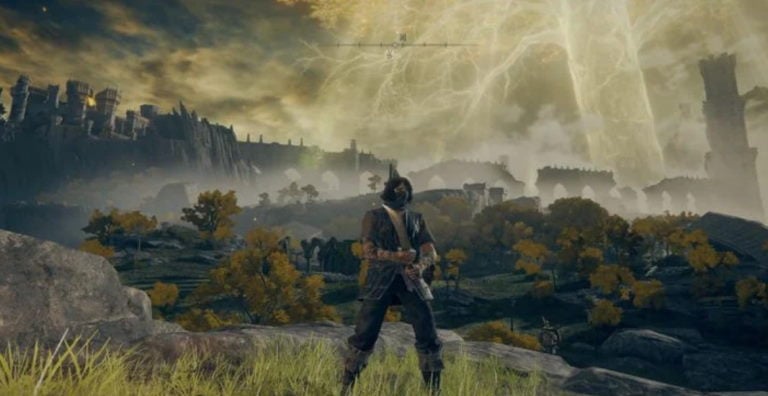 The Great Knife is comparatively a smaller dagger but certainly has its own perks. Firstly, it deals great damage to enemies despite its compact size. Apart from that, you can easily customize the weapon art of this dagger. Considering its size, powers, and ability, Great Knife can be a good choice at the early start of Elden Ring.

No doubt, you can obtain this knife shortly after you enter the world of Elden Ring, however, it won’t be that easy to find it in the open world. If you seek this dagger, you can either kill Gastoc and get the Great Knife or you will have to start your journey as a thief. 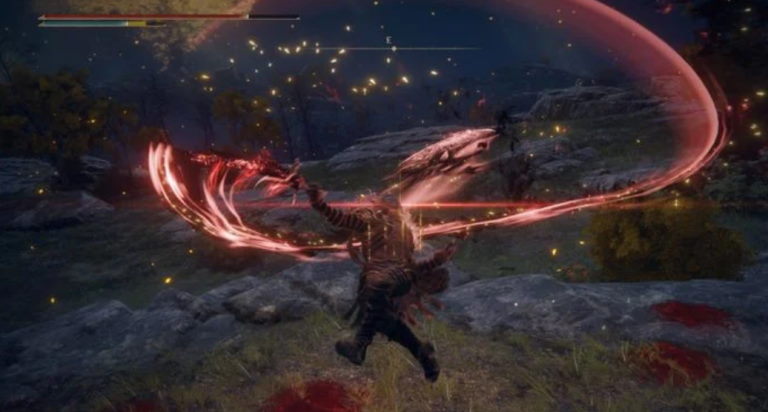 Finally, closing this list with yet another deadly dagger in Elden Ring. If you have gone head-on-head against any black knife assassin before, you must know how tough it is to defeat them.

The black knife basically scales off of Dexterity and Faith and deals great physical and holy damage to its enemies. The black knife dagger has special properties that even make its punches through armor an effective one.

Apart from this, it comes with the Blood of Death weapon art that lets it fire projectiles at its enemies. These fire projectiles are moderate ranged attacks and are able to drain the enemy’s HP significantly.

Hence, from an overall perspective, the Black Knife is one of the best daggers on Elden Ring. But with everything you get, there’s also a downside to this dagger. The weapon art of the Black Knife is relatively slow making it difficult to use against enemies with good mobility.

Daggers in Elden Ring might not seem to be much effective if you compare them with the other overpowered weapons. However, with the appropriate strategy and combat skills, these daggers can turn out to be deadly ones as well.

Fortunately, if you wish to wield a dagger in Elden Ring, you can definitely look forward to using one of these daggers as they provide you with good strength, power, and weapon art. Let us know if we missed out on something and comment below your favourite dagger in Elden Ring.