When users install and use an app on their phone, these apps use resources such as RAM, storage memory, Cache to process data and enable the user to perform his/her tasks. Netflix is a major entertainment network spanning across the corner of the globe. Recently, a user quoted that he has been observing issues with Samsung Galaxy S8 Netflix crashing on the phone. It could be due to two reasons mainly. First is, the issues are in the app and that is why it is showing the error “Unfortunately, Netflix has stopped”. Secondly, it could be due to a firmware problem that has affected the app to run on your phone.

Also Read: How to Clear Netflix Cache on Samsung, LG, Sony, or any Smart TV? 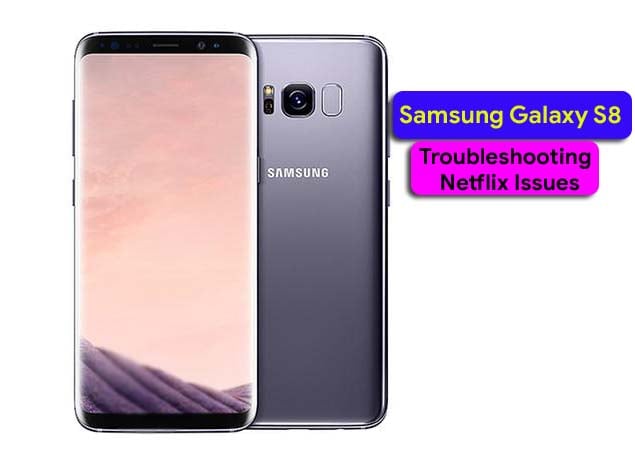 Netflix is a major entertainment company, thus, it has well-established and qualified developers that work round the clock to fix bugs and make it run smoothly without crashing. Since Netflix looks after the development of its app pretty closely, the chances of the app being at fault are little. However, the app is probably showing the error due to firmware problem which is nothing but the underlying OS that your phone uses for all its apps and services. Apart from these two major Netflix related issues, there are other common issues that users and smartphone owners have expressed in forums. We decided to provide a thorough guide on how to fix common problems with Netflix so that you can follow in case if the app stops working.

Apps can subside to work properly due to n number of reasons and that is why there is a fix for almost all the issues. This is a guide on how to fix Netflix issues on your Samsung Galaxy S8, however, most of them can be applied to other Android smartphones too.

If the app is persistent to show errors whenever you try to access it, you can simply do a soft reboot. Don’t mistake it for a simple restart because it is more than that. It is essentially a method used to restart all the core apps and services that your phone uses to work all the processes. This will enable you to use Netflix without crashing or freezing since the phone will plenty of resources to be used to start the video streaming app.

The reboot also eliminates the chances of apps getting frozen or crashed often. Don’t expect a miracle after you reboot because it could take from a single to several reboots to get the app to run properly. To reboot your phone, simply hit the Power button to switch it off. Wait for few seconds and then, hit the Power button again to reboot it. Try Netflix after reboot to check if the error has been sorted or not. If not, then you can follow the next methods which will be more effective than the first one.

Apps use resources and save data on the RAM and Cache and finally to the internal storage. This can cause crashes and that is why users are recommended to clear cache and reset the app. Cache is nothing but a temporary memory where the app stores the instances of the last visited sites or videos. Although this makes the further process a lot easier, cache tends to pile up which starts consuming more resources available. Therefore, if cache and data are the culprits, you can reset it to check if the app is working properly or not.

If the above two methods didn’t help you at all, chances are that the app is not compatible or not up-to-date. If you want to use it without FDR which is the fourth method, you can try installing it. For this, you will have to uninstall it first that will erase all the data, cache, and probably all the issues with Netflix app. Here is a simple step-by-step guide on how to uninstall and then install the app.

How To Uninstall Netflix on Samsung Galaxy S8?

How To (Re)Install Netflix on Samsung Galaxy S8?

FDR or Factory Data Reset is known to fix the majority of issues related to the phone and apps and that is why you’ll find this tip in every guide. However, there are chances of losing the data stored on the phone as well. However, since you have been observing issues with only the Netflix app, the phone must be working properly when using other apps. Thus, this will allow the users to take backup of all the data stored on the phone. You can use SD card or an external drive or Google Drive to store the data. Then, perform the FDR as mentioned below.

How To Factory Data Reset on Galaxy S8? (Hardware Keys)

There are basically two methods available to do FDR of which, this gives a lot of features during the process. Follow the guide to do it.

There is an alternative available to reset the phone which is by using the built-in feature to “Backup & Reset”.

Although you’ll have to reinstall all the apps including Netflix it will surely work smoothly.

Let us know what method worked best to fix Samsung Galaxy S8 Netflix crashing issue. Also, don’t forget to subscribe to GetDroidTips to get the daily dose of information related to Android and iPhone.