Since the news of Total War: Warhammer 3 was first announced, the game went up with great hype in the market. Fortunately, the cataclysmic conclusion to the trilogy didn’t fail to keep up to the expectations. Talk about the storyline, graphics, dialogues, or audio quality, everything is just astonishing about the game. Now, whether you like playing solo or rising up against your friends in multiplayer mode, you must be interested in the various factions of the game.

Total War: Warhammer 3’s most highlighted part is its various interesting factions. But players often get into this dilemma of which they are the strongest. Whether you are planning to play against friends in multiplayer mode or going solo, you will want to know the Total War: Warhammer 3 Best Factions Tier List. With that in mind, we have spent some time delving into which factions we think are the best among the others and ranked them from best to worse. This list is entirely based on their strength, simplicity, and their unique mechanics which will you get your grip on when to use and when to avoid. 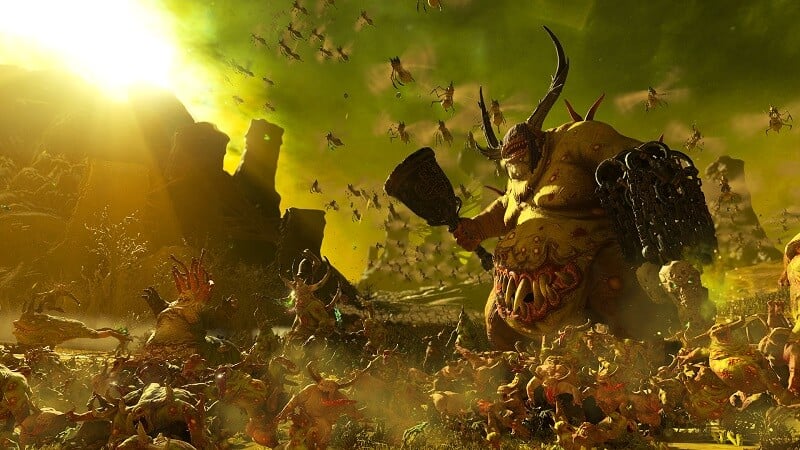 For now, we have a total of 8 factions in Warhammer 3, and there’s no way we could compare them with one another. Although there are slight differences in the power and complexity of the races, each of them has its own uniqueness. Here are all the best Warhammer 3 factions you might like to put your hands on. 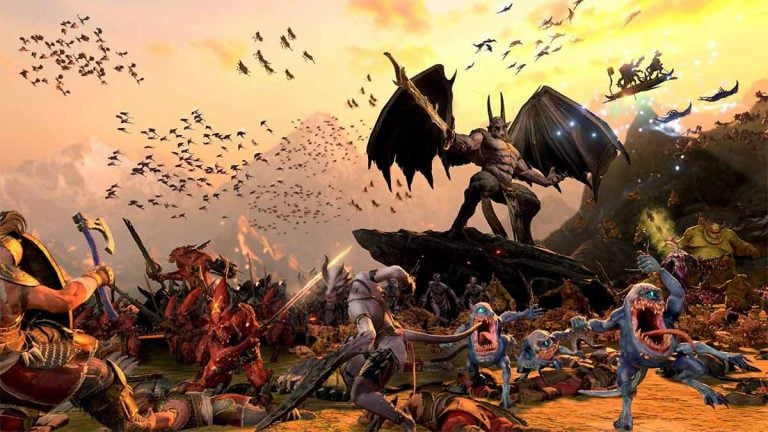 If you are all puzzled about choosing one among these factions, perhaps Legion of Chaos must be a great one to go with. Well, this is because Legion of Chaos is a perfect blend of multiple Warhammer 3 factions. As a result, it lets you make your desired army by mixing up the units of Nurgle, Khorne, Tzeentch, and Slaanesh. The built-up hybrid army is immensely powerful and can rip off its opposition completely.

The main lord of chaos in the realm of Legion of Chaos is a Daemon Lord. The hero of this faction is highly customizable. You can even experiment with its various body parts to get your final desired character. Besides, the Legion of Chaos army is extremely ruthless and defeats any opposition coming in their way. As a result, diplomacy comes at last only if your army starts looking weak and is on the verge of falling down. The Legions of Chaos army are all ferocious and bloodthirsty which makes it one of the cruelest factions in the game. 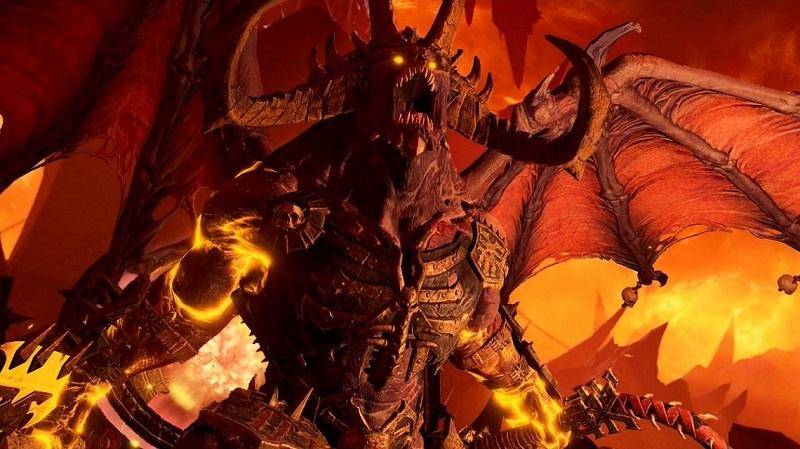 Unlike the other factions, Khorne is again one of the powerful Warhammer 3 races that have no spellcasters of missile units. In fact, the Khorne is a melee specialist faction, meaning you can witness a large fight between the confused ones. Although they lack spell castings and missile powers, the Khorne armies are still among the most brutal ones that finish their opponents within minutes of every fight.

More interestingly, as you keep killing your enemies, you unleash various sorts of abilities that boost your power throughout the fight. Additionally, at some point, you can even unleash a devastating fiery explosion that could even take down a huge portion of your opponent’s army as well. The Khorne faction is basically known for the raw power and brutality of its army. 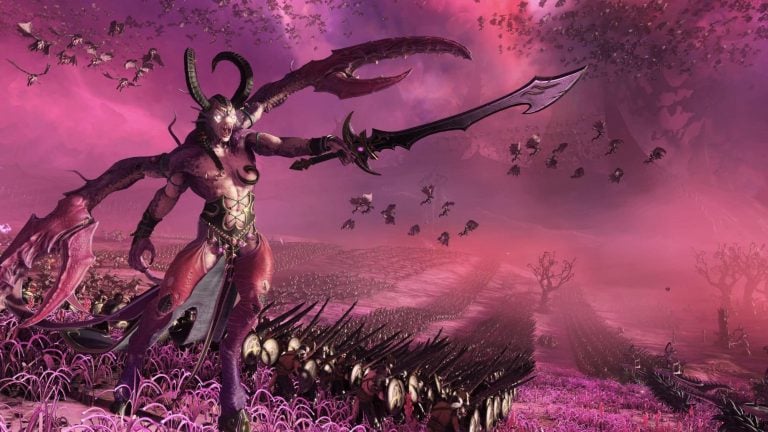 Considering the visuals, Slaanesh is one of my personal favorites. Unlike Khorne or Legion of Chaos, Slaanesh specializes in speed and ferocity. The Slaanesh army is extensively powerful and can instantly rip off opponents using their ferocious nature and supernatural battle speed. However, all their specialty comes at a great price. Although the Slaanesh army has extensive battle abilities, the army troops lack proper armor and health. 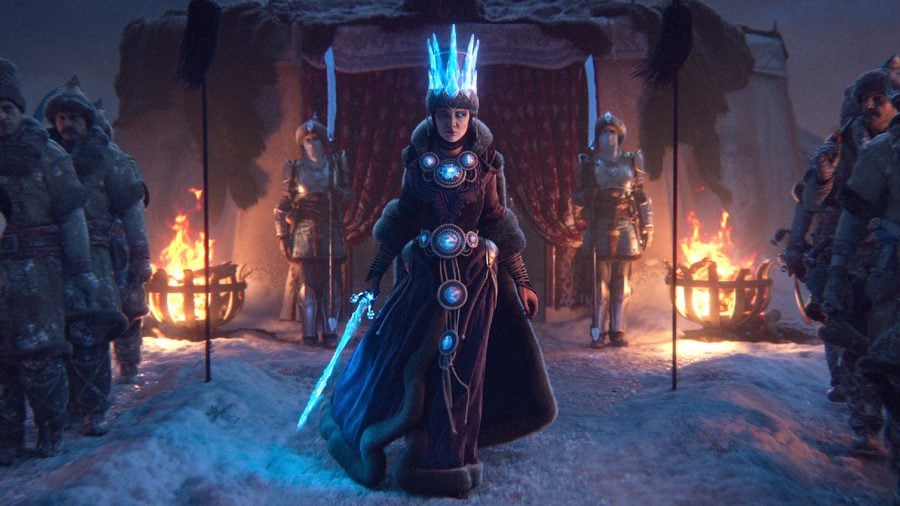 Kislev is one of that factions which can be considered as an ideal choice for all beginners. The faction pictures a central storyline where you are supposed to save the character named Ursun. The entire race revolves around the same story as you fight your wars to complete the mission. Therefore, if you are a newbie, Kislev is indeed the first choice you must opt for.

Besides, it uses hybrid units ranging from various spell casters, cavalry, melees, and missile-carrying army troops. So, we can say, it lets you experiment with a combination of armies from multiple factions which is another reason why it is considered beginner-friendly. However, like the other factions of Warhammer 3, Kislev’s do not carry specialty in any kind of power. Therefore, in order to win fights, you need to be very strategic, diplomatic, and use the strength you possess in an accurate way to defeat your opposition. 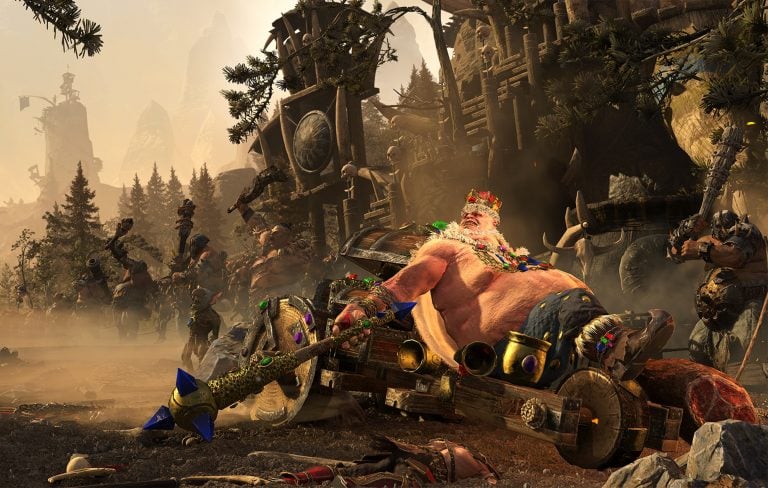 Ogre Kingdom is a downloadable content in Total War: Warhammer 3. It comes absolutely free for those who pre-order or purchase the game by the first week itself. However, do not take it as a light one just because it is available for free. In fact, Ogre Kingdom is another top-notch faction available in Warhammer 3.

This faction contains tons of monsters wielding immense strength and power. Although the strength of the monsters is quite raw and simple but still a preferable one for dominating over the opposition. There are various types of monsters and some are even not famous for their strength at all like the Gnoblars. however, they still come in handy to overwhelm your enemies after really fracturing their units. Besides, Ogre Kingdom also has some good spellcasting and missile units. Overall, it is a complete faction that brings in a lot of versatility, and with a few tactics, you can easily crush your opponents. 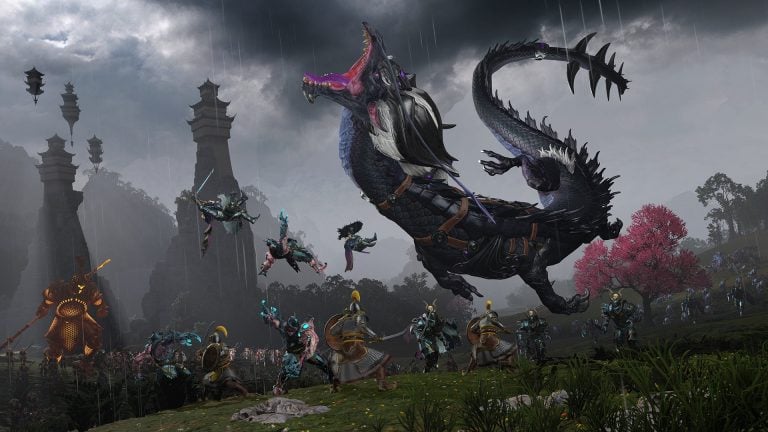 Well, this Chaos faction comes with its own set of positive and negative traits. Cathay is another human faction just like Kislev we saw before. However, unlike Kislev, the Cathay faction lets you build a harmonious unit by bonding the Yin and Yang units together to lead the path. While this seems like a positive way to go, it has various negative effects on the army at the same time.

No doubt, both the units stand together stronger. But when your unit is likely to fall during a fight, it breaks the very bond between the units and they start to run away. This in fact breaks the faith of the rest of the troops and finally leads to a failure. Moreover, the Cathay doesn’t have any special power to withstand substantial damage like the Kislev. Neither of the monsters carries any specialty which could make it a special one.

Perhaps you might give it a try if you believe more in your strategies than your power. If you can come up with the right strategies, the Cathay units can come victorious against the others.

If you would like to give your enemy a slow death as you take control over them with time, Nurgle is the one for you. This Chaos faction unit consists of monsters that basically depend on poisoning the opposition. Once they spread the poison, it makes the enemy slower, weaker, and much vulnerable to their attacks. The Nurgle army then slowly takes over the control in the fight and defeats the enemies.

In addition, the Nurgle units also possess great armor and health, as a result, you can care less for taking the damage and plan more on weakening your oppositions. While your enemies take the hit, you can even unlock new powerful spells and use them to gain an advantage. Although these powers make the Nurgle quite impossible to defeat, they indeed have a huge disadvantage on the other side. The lack of missile units and relatively slower speed of the Nurgle units allows the enemies to set for counter-attack and defeat your unit. 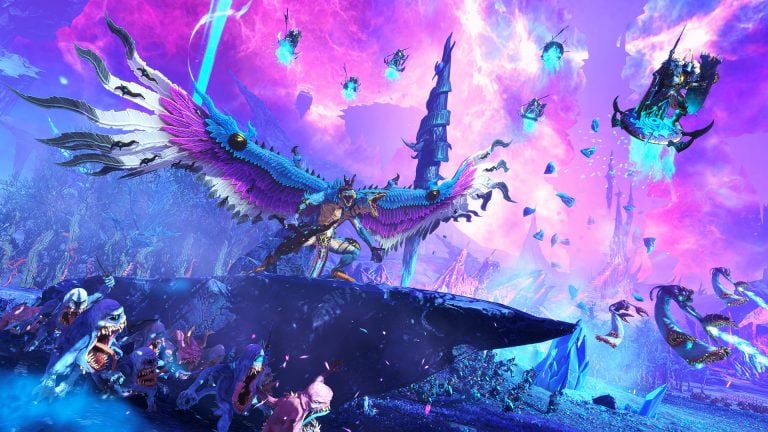 Finally, the Tzeentch is another magical Chaos faction well-known for its huge spellcasting. The faction has a substantial number of spellcasters and other missile and flying units. The most special thing about Tzeentch is that it has a magical barrier that protects the units for a while. Although that looks like a great advantage, the barrier could possibly survive for very little time. It easily falls for substantial damage, and once it falls, you will watch your units fall one after another as they cannot withstand a good amount of damage.

On top of that, the melees and other units are not as tough as in the Khorne and other factions of the game. As a result, your attacks aren’t going to be that effective, however, you will take more damage in time. Therefore, looking from an overall perspective, Tzeentch feels like a comparatively weaker faction than the others. However, if you can come up with an extremely good strategy and make substantial damage to your enemies through spellcasting at the start, you might have a chance to stand till the end.

So, overall these were the best factions for the Total War: Warhammer 3 tier list. As you have seen, the most powerful factions are specialized at certain things that make them capable of taking damage and attacking enemies.

On the other hand, some of the factions come up with hybrid units from multiple factions, however, the strength distribution is not the same. Therefore, if you go with a stronger faction, you might win by power else you need to build good strategies to take down the stronger enemies.