Xiaomi is one of the most popular smartphone brands in the world. The company is known for its affordable and high-quality smartphones. Xiaomi is also one of the few companies that provide regular software updates to its devices. The company recently released the Android 12 update for its devices and is planning to roll out Android 13.

Xiaomi is now working on the Android 13 update for its devices. The update is in the beta stage for most devices and is expected to be released by the end of 2022. Apparently, the Android 13 will be based on MIUI 14, as Xiaomi’s product manager teased on Weibo. The update shall bring several new features and improvements to Xiaomi devices. While almost all major Android OEMs have already released their version of Android 13 software, there’s nothing from Xiaomi yet. Xiaomi is a bit late this time with its Android 13 update. However, the wait for Xiaomi Android 13 seems to be over very soon.

The Chinese giant’s product manager shared the logo of MIUI 14 on Weibo. The product manager also said that a new product announcement would be made next week, which is likely the Xiaomi 13 series that will ship with MIUI 14 out of the box. 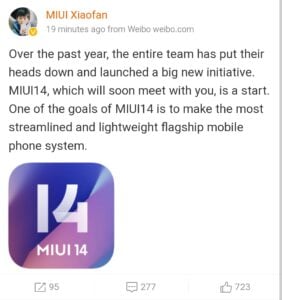 In addition, the POCO X5 5G was also spotted on FCC and Indian BIS certification websites with the software version MIUI 14. So, it is confirmed that MIUI 14 will be launched soon and will be based on Android 13.

So, what changes are we going to see with Xiaomi’s Android 13 update— MIUI 14? The GM of the company says that the Xiaomi team has been working to make MIUI 14 the lightest and most streamlined flagship mobile phone system. This could very well mean an end to the ads and bloatware on MIUI. Nevertheless, we will have to wait for the official announcement to get more accurate information.

In this section of the article, we will keep track of all the updates to Xioami’s Android 13.

After months of beta testing, the Android 13 stable update has officially made it to the Xiaomi 12 Pro. The Xiaomi 12 Pro is the first device to get the Xiaomi Android 13 stable update. The build number for this update is V13.2.4.0.TLBCNXM is available only in China as of now. The update brings MIUI 13.2 and the October 2022 security patch. However, there is still no MIUI 14 update for the smartphone yet.

Devices that may get Android 13 update

Devices that may not get Android 13 update

Starting with the delicious codenames, Google gives to Android versions. Android 4.4 was called “KitKat”, Android 8 was “Oreo”, and the latest Android 13 is confirmed to be called “Tiramisu”. Android 13 might come with a selection of new palettes to fetch colors from the wallpaper.

Most OEMs offer QR code scanning just by pointing your phone’s camera at a QR code. But, Google wants to make it an inbuilt feature by adding this feature to Android 13. The Developer preview version 1 of Android 13 has this feature in the Quick Settings toggle, though it was inaccessible.

Android 13 could remove the language barrier by bringing an option to set your preferred language for any app. So, if you are someone who would love to use some apps in a non-English language, then it might be a great feature for you. We got to see this in Android 13 Developer Preview 2. Though, it was not working well on every phone.

‘Do not Disturb’ renamed to ‘Priority Mode’

In Android 13, you won’t find Do not Disturb as Google is renaming it to Priority Mode. The functionality is likely to remain unchanged.

Android 13 brings an updated media player that appears below the quick settings panel and on your lock screen. It looks better with the album art taking the entire background. Also, the controls have been moved around slightly.

According to a report from Android Police, Android 13 could bring a tap-to-transfer (TTT) feature that will allow users to pass on media controls to other linked devices. However, no such thing has been found in code or developer preview builds.