In Re-Logic’s widely acclaimed adventurous sandbox game, Terraria, the Blood Moon is an event that takes place randomly on a particular night. By using a Bloody Tear, it can be forced to take place. When the Blood Moon event is in progress, you can go and fish in any water body to have a chance of obtaining special items. You might even get to encounter some unique enemies this way.

In this new guide, we will take you through all the special items and enemies you can come across by fishing during the Blood Moon event in Terraria. 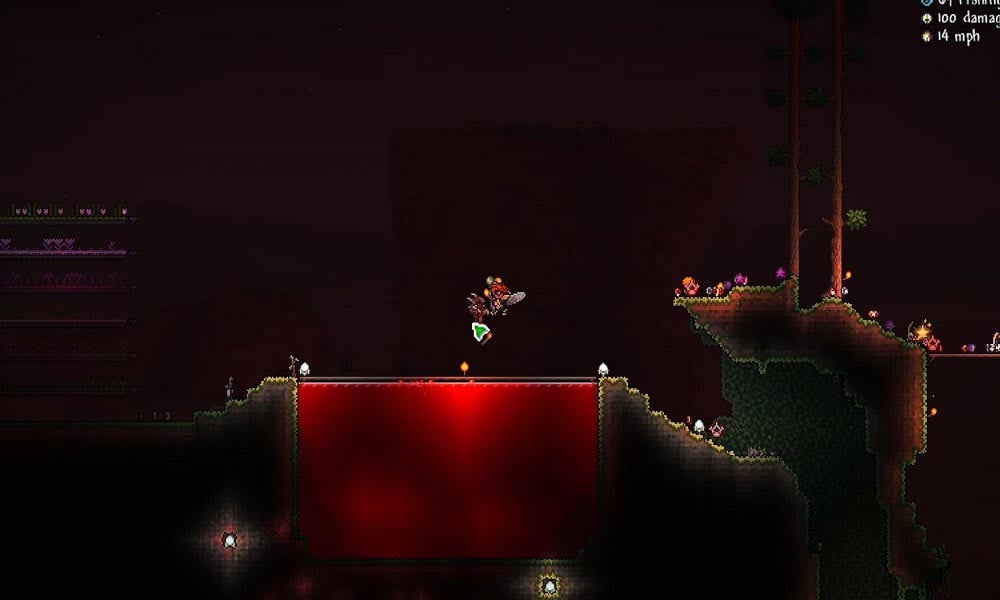 Let us begin by becoming familiar with the various unique hostile creatures you can encounter by Blood Moon fishing. Basically, there are five new mobs you will be able to catch this way. You will be able to find two of them (Zombie Merman and the Wandering Eye Fis) before hard mode. The Blood Eel, Dreadnautilus, and Hemogoblin Shark are available in hard mode.

Let us now take a better look at each of these foes – their stats and potential damage in the classic mode in Terraria. Obviously, the stats and damage will be raised at higher difficulty settings.

This is the first adversary you will encounter before hard mode. It is a bit tougher than the Wandering Eye Fish, but not nearly as agile. You can use that to your advantage.

This is another enemy you will come across before hard mode. With the health of only 300 units, it is pretty easy to kill. However, it also has the ability to fly, so be wary if you catch one on your line.

This is a seriously irksome creature that moves rapidly both in water and on land and strikes at you with projectiles. It is best to avoid fishing it up if you can.

This is another agile and rapidly moving mob that can cause variable damage depending on the part of its body that you strike. Targeting its head will give you the best results and will help you take out this foe relatively swiftly.

This is, by far, the most dangerous adversary you will encounter while fishing during the Blood Moon. Although the game does not officially give it the status of a boss, it is tough enough to qualify as one. It has the ability to unleash Blood Squids at you, each of which has 1000 units of health! Good luck taking down this one.

Okay, so we are now familiar with the enemies you can encounter while fishing during Blood Moon in Terraria. It is time to take a look at the different items you can obtain as drop loot by killing them.

That is it for now. We hope you all have a great time with the Blood Moon fishing experience in Terraria. Check out our Windows Guides, Gaming Guides, Social Media, iPhone Guides, and Android Guides for more content. Subscribing to our YouTube Channel can help you win our $150 giveaway contest. If you have any queries or feedback, comment down below with your name along with e-mail ID, and we will reply shortly. Happy Gaming.