Today we will list all the Supported TWRP Recovery for Samsung Galaxy devices, Yes! Both officially and unofficial. TWRP recovery is considered to be one of the important contributions from the active developer community that Android has. This open-source custom recovery is in wide usage around the world. The touchscreen enabled and easy to use interface is the important thing which made them so popular. TWRP recovery helps to install Custom ROM, Kernel, Mods, Root or even backup and restore any ROM.

Android devices are at its peak of popularity now. The most number of smartphone users around the world uses Android-powered devices. This invention from the home of Google has drastically changed the use of smartphones around the globe. A lot of developers have tried and are still continuing their try to build something better than Android. But all of them have failed miserably in delivering this. While at the same time Android is improving with each new updates they get in all terms. 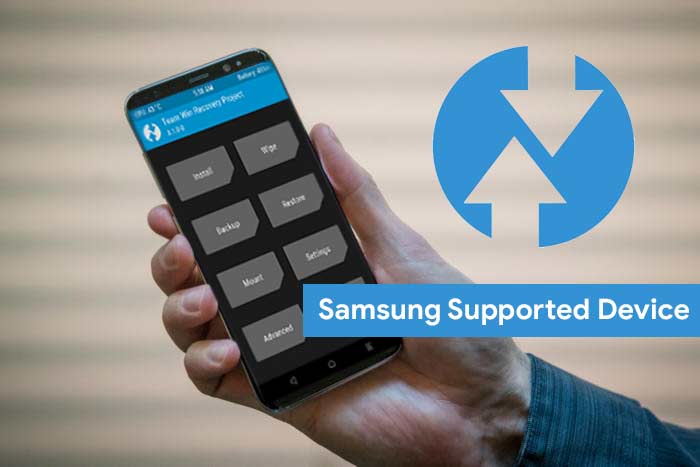 Although Apple’s iOS is something which can stand up with Android, many problems including the pricing have made Android more preferred. Android has helped a lot of manufacturers to obtain some good sales in the market. Samsung with no doubt is the top in this list. So we have decided to share all the list of TWRP Recovery for Samsung Galaxy Devices.

From the time Nokia was considered the leader of mobile phones Samsung was there in the market. But the increased popularity of Nokia has always made them stay low in the market. This is the time when the Android operating system came up on the market, and Samsung has used the opportunity wisely. Since then Samsung has built a number of devices in the various price range that is powered by Android. And eventually, they became the leader in the Android market and still serve to be one important name in the smartphone market. The real success of Samsung is nothing but devices on all budget ranges and proper updating in case of technology and features.

Although the Android operating system is easy to use, the recovery modes of these devices are always something that looked strange. The disabling of the touchscreen is a big issue faced by a lot of people. A common user can see this as something strange and dangerous to use. This is where the importance of third-party recoveries came up among Android users. And TWRP recovery is a true leader on this list.

List of All Supported TWRP Recovery for Samsung Galaxy Devices

Here we have listed all the supported Samsung device on which you can install TWRP Recovery. With each link, we have included the guide on How to install the TWRP Recovery. So read the step by step carefully.

TWRP Recovery For Samsung Other Series:

I hope this guide was very useful, if you think this can help others, then please share this post to your friends and families.